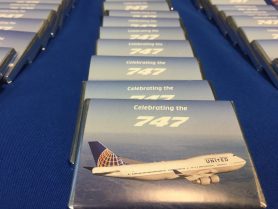 Souvenirs from the United 747 retirement ceremony

The elegant contours and unmistakable forward hump of the Boeing 747 have been a common sight in the world’s skies for the last half-century. The 747, which coined the term “jumbo jet,” has been the flagship of many airlines and has flown extensively in the U.S. and around the globe. While the 747 continues to operate internationally with its two latest variants,  the 747-400 and the 747-8, its use by domestic passenger carriers is coming to an end. The Boeing 747-400 is not as economical as its younger widebody counterparts like Boeing’s 777 and 787 or the Airbus A350, as its four-engine configuration is not as fuel efficient as its twin-jet competitors. The aircraft has served faithfully, but is now yielding to the harsh realities of aviation economics, as the last two U.S. scheduled airlines with 747s will soon retire the type. Delta has announced that 747s will exit the fleet by the end of the year, and United will park their remaining 747-400s next month. 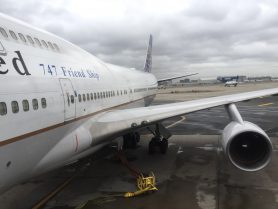 One of United’s 747-400s was pulled out of service for two weeks to do a farewell tour of their hubs. To commemorate the 747’s history, the airline added a retro “United” title to the aircraft, representing part of its livery from the 1970s. N118UA, which was delivered to United in February 1999, made its fifth stop on the tour at Newark-Liberty International Airport. NYCAviation was invited to tour the plane, take pictures, and talk to employees at the airline’s ceremony in Terminal C.

United Captain David Smith, when asked what makes this jumbo jet so special, said “This airplane because it was so iconic, designed in the 1960s with slide rule, literally, and to have the plane stand the test of time almost 50 years later, it still performs and does things that no other plane can. To think that the engineers who designed it in those days were able to stand the test of time is why the plane is so special. It truly is the end of an era and I’m looking forward to being able to serve and put the plane to bed…give it a good send off.” 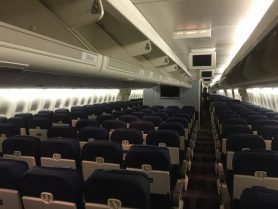 The economy cabin in 3-4-3 configuration

Senior Flight Attendant Silja Kaude-Kelly expressed sadness over the retirement, saying “I will be crying. It’s a sad day. It’s fond memories. It’s an era that is going bye-bye. There’s something regal about this plane. It’s just an end of an era and I think that everybody is going to be sad at saying goodbye to this majestic bird. This plane used to go mostly internationally, so all the wonderful destinations that this plane took us to – transpacific, transatlantic.”

The “Flight to Nowhere” tour has the aircraft visiting United’s seven domestic hubs. In addition to Newark, it has visited San Francisco, Los Angeles, Houston, and Washington-Dulles. After Newark, it will travel to Chicago and Denver. At each of stop on the tour, lottery-winning employees take a celebratory two-hour flight before returning back to the airport, though unfortunately bad weather and gusty winds cancelled the Newark excursion.

On November 7th, United will fly its final revenue flight with the 747-400. The flight will travel from San Francisco to Honolulu – the same route as United’s first 747 flight in 1970. That farewell flight will have elements of that original service with crew uniforms and a dining menu from that era. It will be a bittersweet moment for the Queen of the Skies the 747 ends its time with United after 47 years and 4 different versions of the airframe.

Australia to remain close for some time despite vaccine roll out

What’s next after ITB Berlin 2020 cancellation?

SoftBank Is In for Long Haul With Massive Ridehailing Bet –...