By June 1983, the city of Liverpool found itself on a lonely island of red, engulfed on all sides by a steamrolling tide of blue.

Between 1972 and 1982, Scousers had seen 80,000 jobs disappear as the docks closed and its manufacturing industry was sliced in half.

Factories were closing, poverty ravaging communities – once the British Empire’s great port, Liverpool was now a ‘broken city’ and fertile breeding ground for a strand of hard left politics determined to lift the city’s people out of the mire. 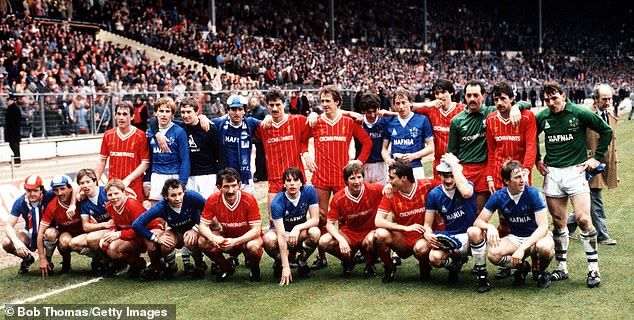 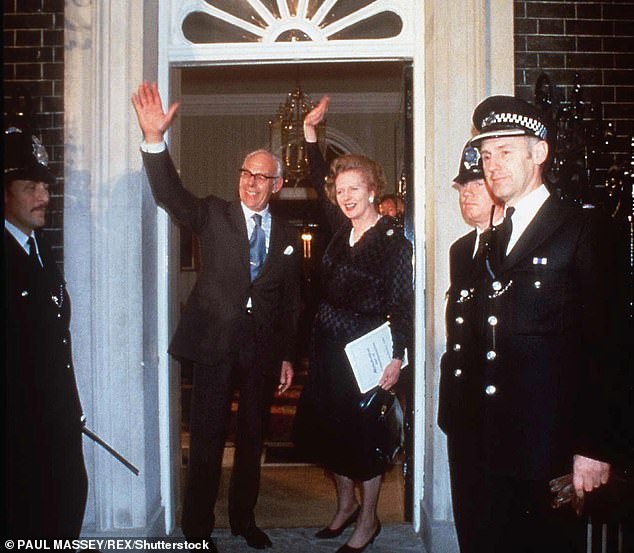 But it seemed the rest of the country was in no mood for change.

That summer, prime minister Margaret Thatcher swept back into office with an increased majority, the Conservatives toasting one of the most decisive electoral victories of the 20th Century.

Liverpool was among a pocket of places in the North West to reject her social and economic revolution and nine months later, the people of this proud city came together for another show of defiance.

On March 25 1984, Everton faced Liverpool at Wembley in the Milk Cup final, in the first meeting of Merseyside’s two footballing powerhouses at the national stadium.

This time blue and red streamed down the country as one – 100,000 packed on to the terraces, in support of two warring tribes but united by collective suffering. 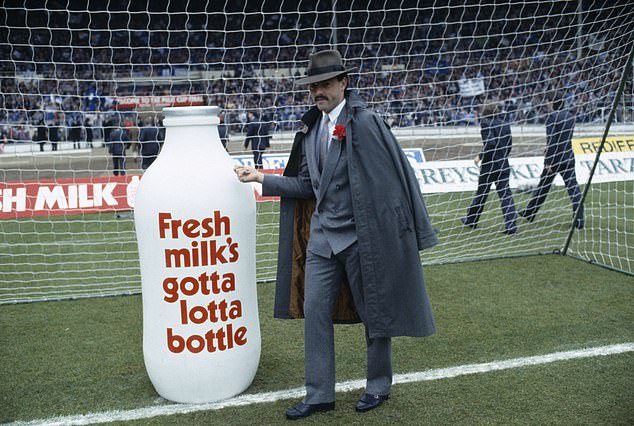 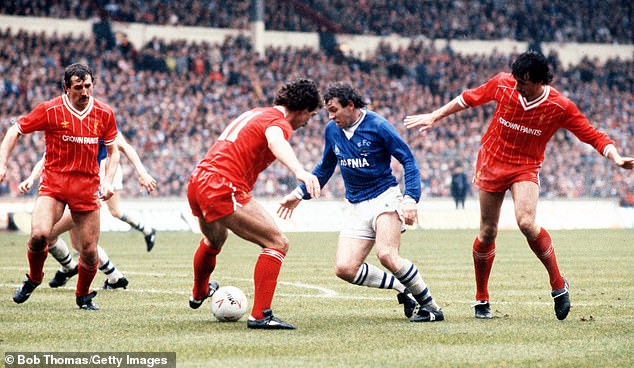 The match, played in front of 100,000 fans, was a largely forgettable affair which ended 0-0

In the end, the final was a turgid affair – ‘c***… a horrible, dirty day,’ in the words of Liverpool centre back Mark Lawrenson.

But its legacy would reverberate for decades. So much so that 35 years on, BT Sport are releasing a film to remember the occasion.

Come the mid-1980s, Joe Fagan’s Liverpool were regular visitors to Wembley. They had won the League Cup in each of the previous three seasons and collected the second of their four European Cups in London only six years earlier.

But this was a first. Never before had their neighbours come along for the ride. So as the rain lashed down in London, the streets emptied out on Merseyside, too.

‘That was the first time I played there. A lot of the Liverpool lads had been there before, but for me to play there and for our lads, it was such a great occasion. And for the city… there was a mass exodus… there must have been another 100,000 people down there just having a day out. 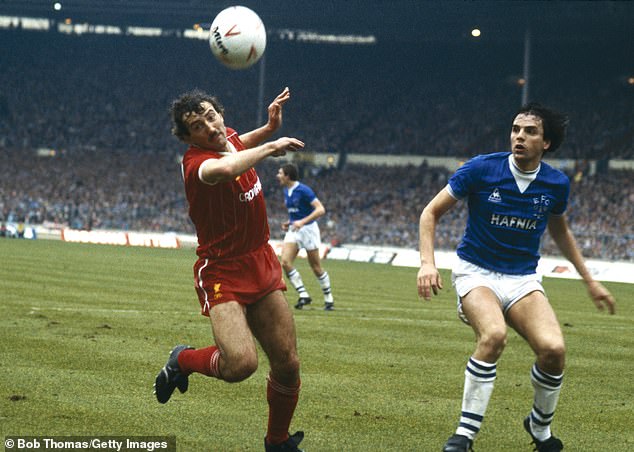 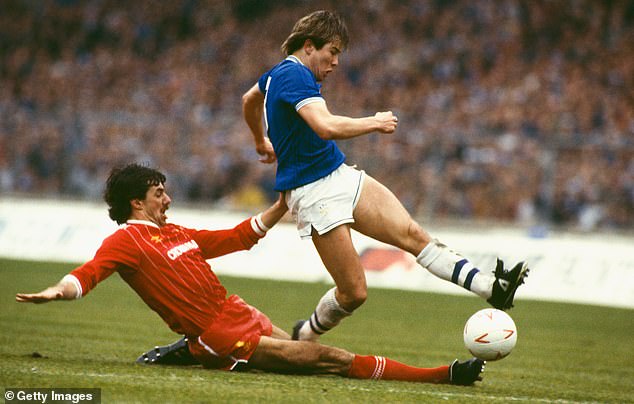 But the goalless 120 minutes saw no shortage of blood and thunder, typical of the derby

He adds: ‘I just remember the bus going in there and it was just sensational and the biggest thing was the kids in red and blue scarves; their mums, dads, uncles, aunties, granddads, grandmas, walking down there hand in hand, it was fantastic.’

Dubbed ‘The Friendly Final’, the match was largely forgettable – save the predictable flurry of fiery tackles and a controversial handball call against Alan Hansen.

Forget the devastation in many of the city’s communities, nothing could prevent this simmering rivalry from bubbling over once the first whistle blew.

‘We actually all got on,’ Lawrenson says of the two sides. ‘But when we played, we were sort of trying to kill each other.’

After 120 uninspiring minutes, however, those tensions were put back to one side – at least until the replay.

Together the two rival teams went on a lap of honour, before coming arm-in-arm for an iconic picture on the Wembley pitch. 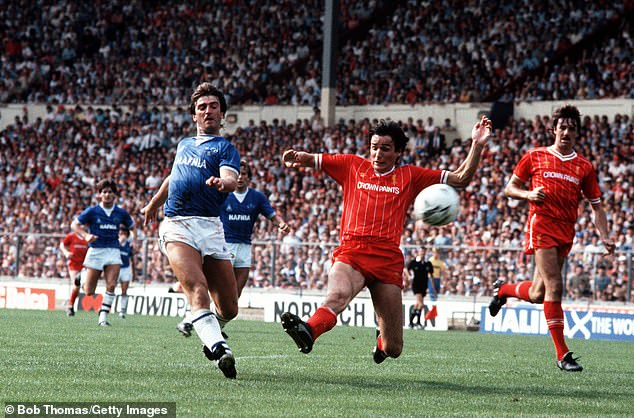 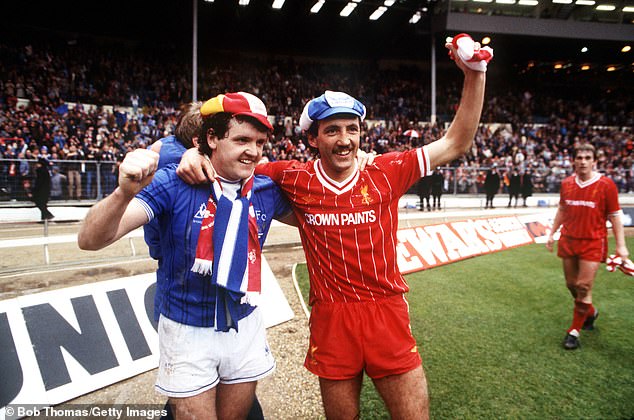 ‘I think that is massive now, if you really look back, that wouldn’t happen today,’ Lawrenson claims.

‘Absolutely no chance. Two fierce rivals from this kind of broken city to actually put their arms around each other.’

It was a renewed sense of hope and solidarity shared by their supporters who, in an era of hooliganism nationwide, showed football tribalism had a pause button after all.

‘I just think the city was so close… they have their animosities at times, but in situations like (Hillsborough), that’s when they come together… that’s what Scousers are all about.’

Adds Lawrenson: ‘It was just a massive, massive statement. In fact, the statement was probably bigger than the game because the game was c***. 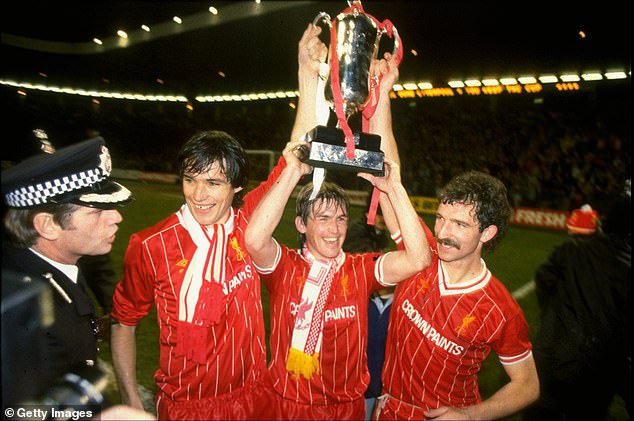 That has long been forgotten by now, while tragedies at Heysel and Hillsborough cast a long shadow over Liverpool by the end of the decade.

But more than thirty years on, the flame of that drab Wembley day still burns bright.

‘That’s what footballs about and that’s what Liverpool’s about as a city,’ Reid remembers. ‘

‘To be part of that and part of that history is something that I’ll ever be grateful for and proud. It was real tough, tough competitive day, but the atmosphere there was just sensational.’

He adds: ‘There was red and blue all round… sat side by side. That was brilliant.’