By Joe Strange for MailOnline

Manchester United missed out on Bayern Munich sensation Alphonso Davies after his trial with the club was cancelled in 2018.

The 19-year-old was one of the stars of Bayern’s 3-0 Champions League win over Chelsea on Tuesday night, catching the eye with a scintillating run before setting up Robert Lewandowski for the Bundesliga giants’ final goal.

But he may not have been lining up for the German club had a three-week spell with United not been called off a little over two years ago. 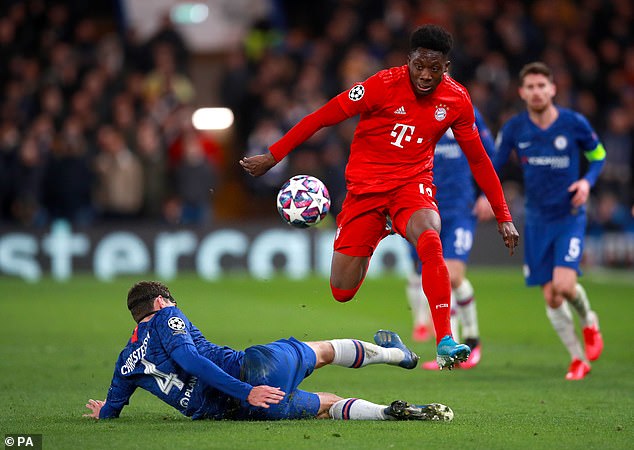 According to the Manchester Evening News, Davies was due to spend time at the club’s Carrington training base in January, 2018.

United scouts had reportedly been keeping tabs on the talented teenager, who was already impressing in Major League Soccer with Vancouver Whitecaps.

But despite being scheduled to fly to England, Davies missed out on the opportunity after being called up to Canada’s Olympic team camp.

Despite earning his first cap for the senior side in 2017 at the age of 16, the wideman was included in a 21-strong group of Under 23 players who will be eligible for the Games in Tokyo later this year.

Davies travelled to Orlando, Florida, for the 10-day camp instead of linking up with United, who were then managed by Jose Mourinho.

Norwich complete deal for McCallum who was trialling at Jamie Vardy’s...