Bruno Fernandes is a dead ball specialist. So too, in a different way, is Harry Maguire. One imagines they are going to grow into quite a formidable partnership for Manchester United from set pieces.

Almost as formidable as VAR Chris Kavanagh on Monday night in keeping Chelsea at bay. He wrongly disallowed a goal that should have been Chelsea’s equaliser at 1-1, he wiped out another that would have brought Chelsea back into the game at 1-2, and he looked kindly on an incident involving Maguire that might have seen the defender play no further part in the game midway through the first-half. This is not the only reason Manchester United won, but only a fool would argue it didn’t help.

United were good, certainly in the second-half when required to defend a single goal lead. They showed more defensive urgency than Chelsea, snapped into tackles, closed down and harried. Whatever their misfortune, Chelsea lacked the momentum to wrest control from United, and would not have relinquished it in the first place had they taken a succession of chances in the first-half. Michy Batshuayi was the main culprit there. 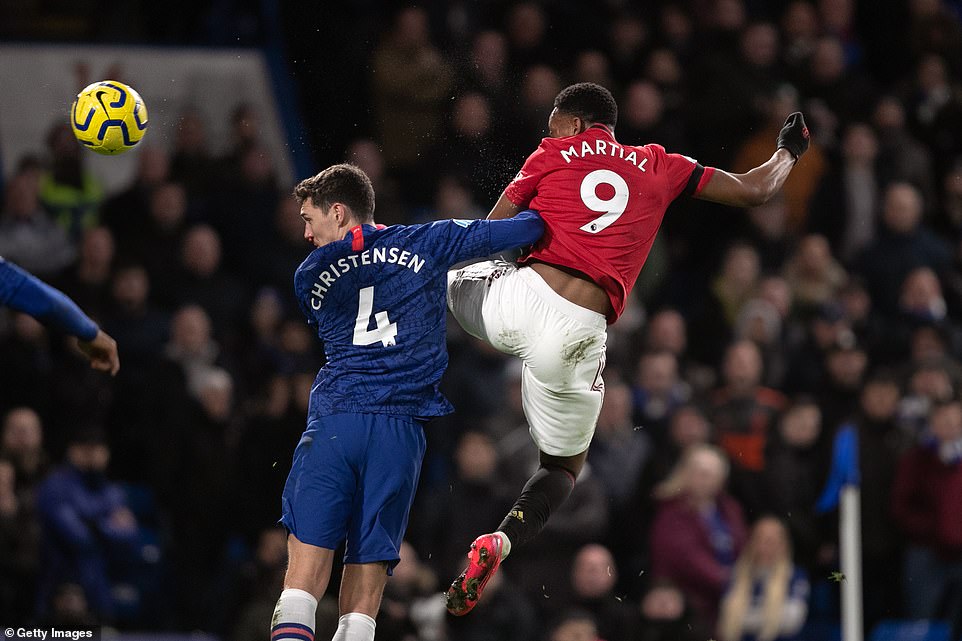 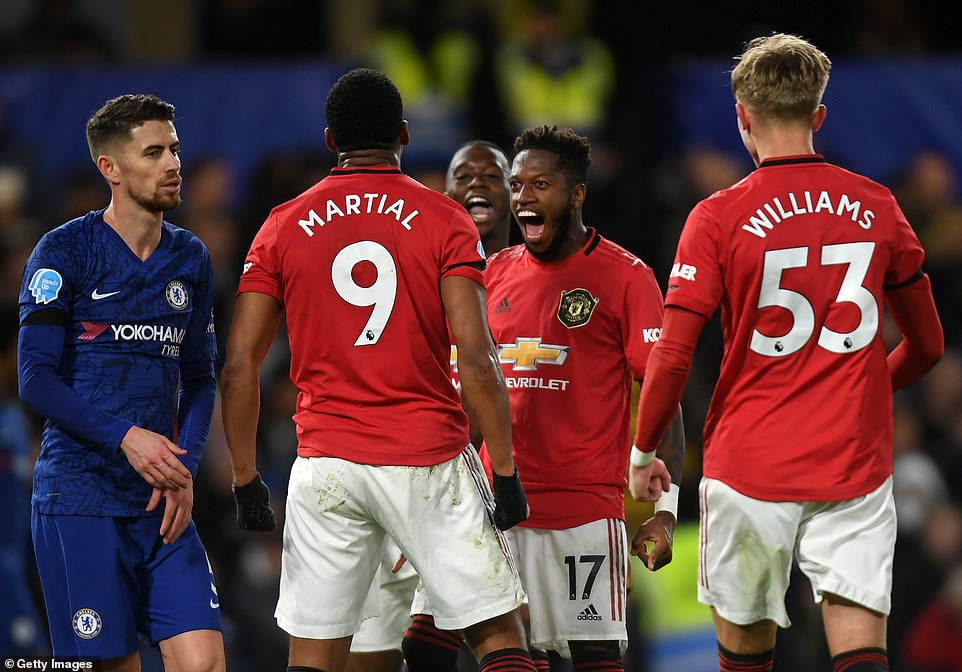 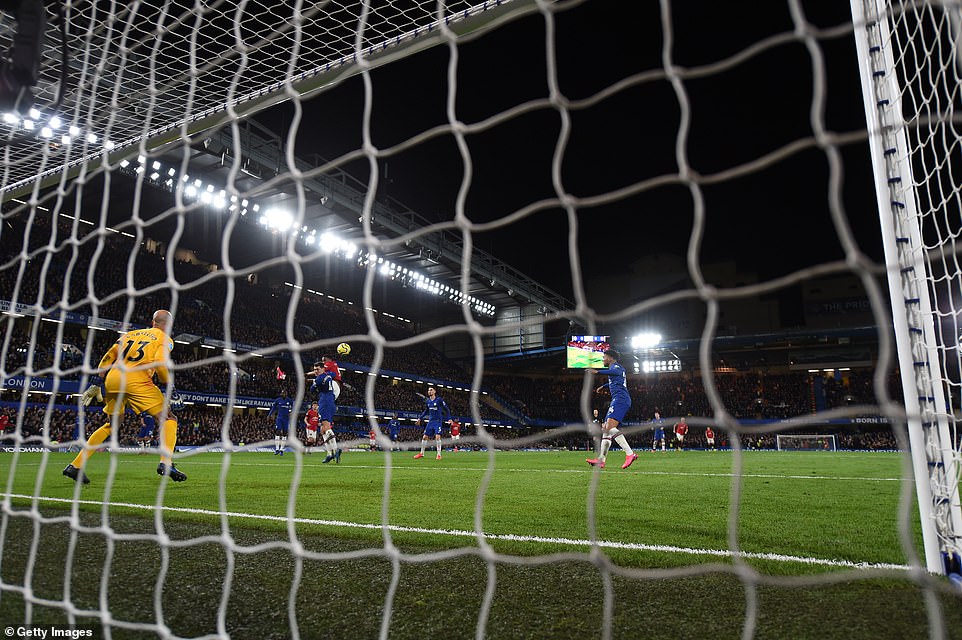 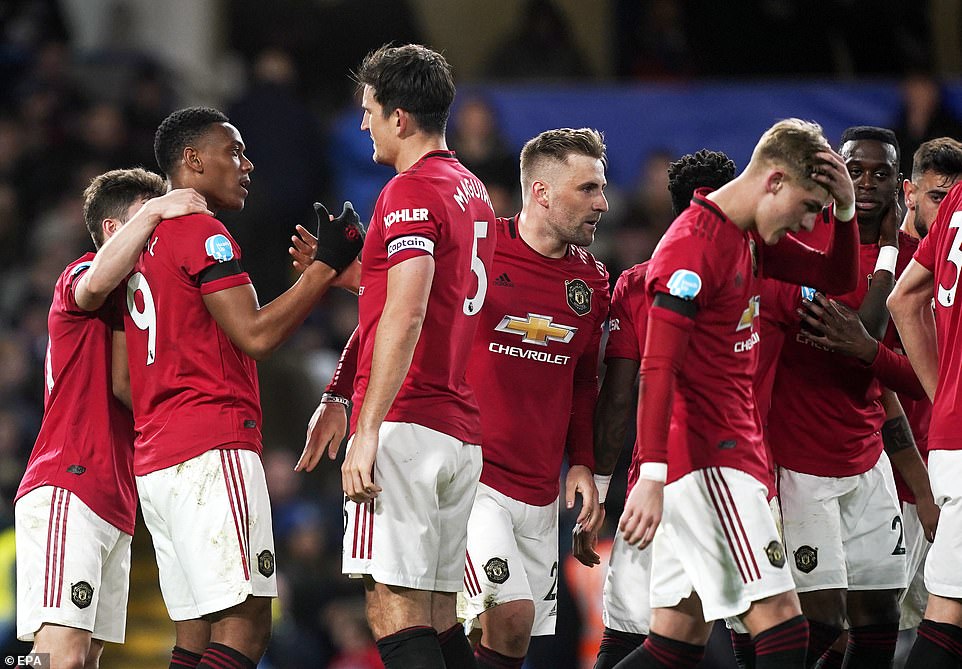 It is not just Manchester United that have been bemoaning an absence of firepower this season. For Chelsea, too, that has been a problem. Tammy Abraham has risen to the occasion but where is his support, where are Frank Lampard’s alternatives? On Monday night, shorn of Abraham through injury, the weakness was painfully apparent.

Chelsea had by far the best of the early exchanges and could even have been comfortable at the break. Instead, they trailed.

Manchester United forged one opportunity of note, and scored it. Anthony Martial has rarely looked like filling the gap since Marcus Rashford’s injury, but he did here. Steve McClaren claimed he was not a central striker, but his leap to head United into the lead as half-time approached was quite magnificent, powerful and strong, exactly the type of positive action Chelsea lacked.

Martial had been quiet until then, but that does not matter if a striker takes his chances. Batshuayi, by contrast, had plenty of involvement but only confirmed why he is so seldom relied upon. Heaven knows what Olivier Giroud must be doing in training not to get the nod ahead of him; tying his laces together, perhaps. 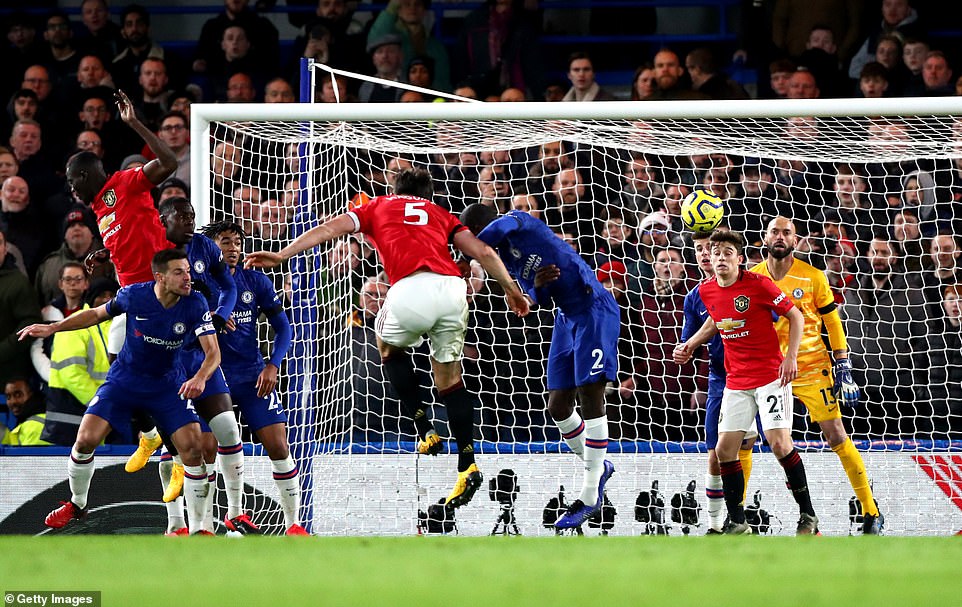 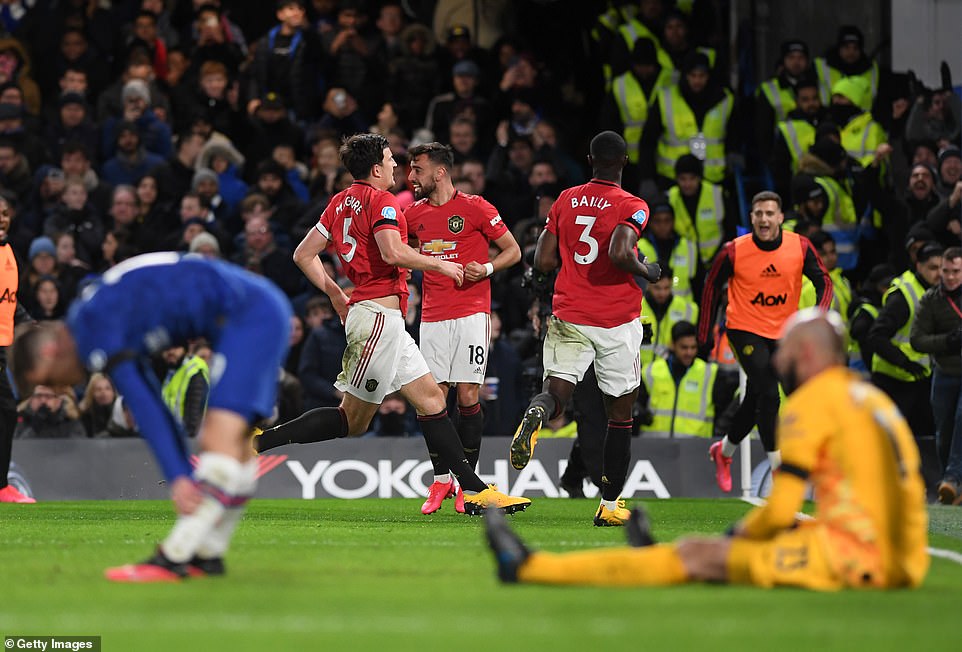 United’s opening goal came after Aaron Wan-Bissaka got the better of Willian on the right flank, whipping in a cross which Martial met, beating Andreas Christensen in the air, and steering the ball into the far corner, past Willy Caballero, again preferred to Kepa Arrizabalaga. Christensen had recently received treatment and did not reappear after half-time, replaced by Kurt Zouma, but by then the damage was done.

It rather summed up Chelsea’s first-half fortunes that no sooner had United gone ahead, they squandered the chance to equalise. Pedro put Batshuayi through but his finish was scuffed wide – his third chance to have gone begging with the game only half done.

Chelsea had by far the best of the half, until the ball reached the final third, with Mateo Kovacic, in particular, excellent at first. He was ably supported by Mason Mount, who came on as a 12th minute substitute after N’Golo Kante was lost to an off the ball injury. By then, Chelsea could already have been two clear, Reece James and Willian going close. After that, all roads led to Batshuayi, sadly.

He could not adjust his body shape to do more with a ball as it sped across United’s area then, in the 26th minute, made a complete hash of a chance set up by Mount. He cut the ball back and Batshuayi met it, but shot wide of the near post. He should have got at least one of his three first-half chances on target. 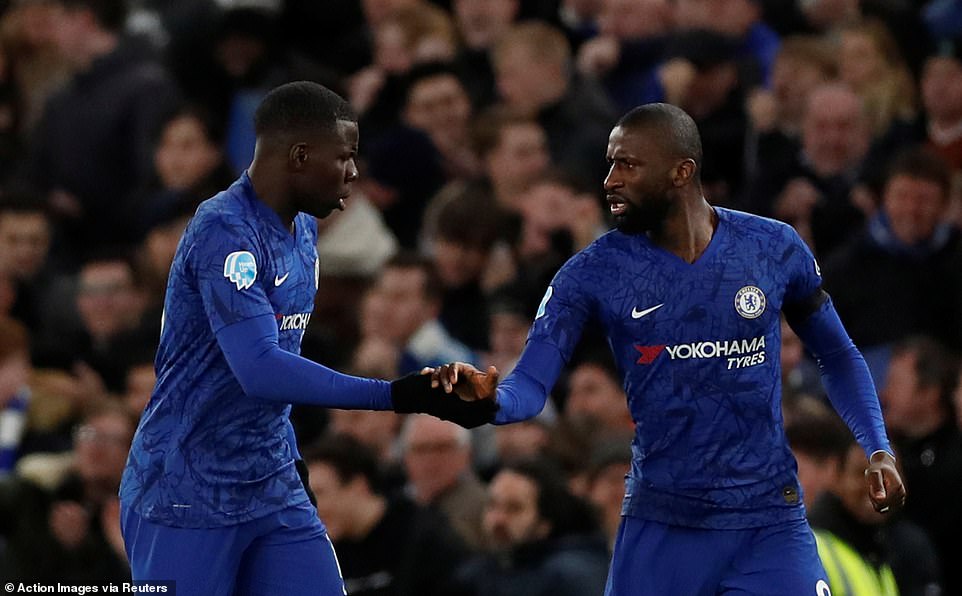 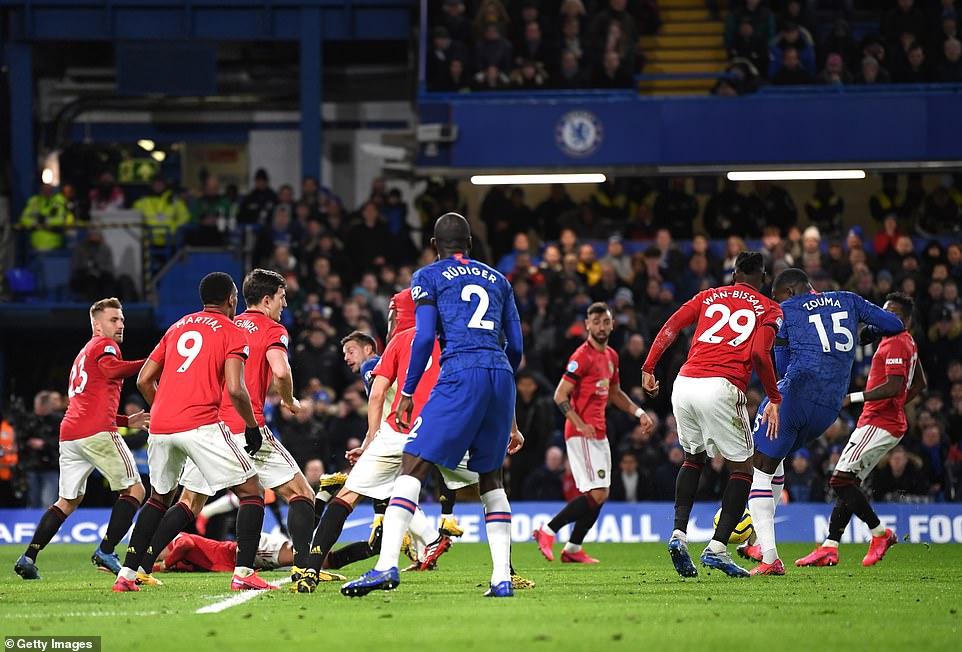 By contrast, Manchester United’s moments in front of goal were for the most part clinical. Fernandes had a very good game and the precision of his dead balls demonstrates enormous promise. It was a superb corner from the Portuguese midfielder that settled this, raising both arms aloft to signal to his intended target the nature of the delivery before providing it, and to the inch. Maguire then did his part, meeting the ball with the slabhead power made famous at the 2018 World Cup and leaving Caballero no chance again.

It was a vital victory because it takes Manchester United within a win of fourth place – although so are Sheffield United and Tottenham are a draw away – which would guarantee Champions League football next season regardless of developments at the Court of Arbitration for Sport. Fifth, though, is only two points away, which will be enough if Manchester City’s European exclusion is confirmed. Either way, while the title itself might be a procession, the scuffle below is tight, tight, tight.

And so, alas to VAR, which chalked off two Chelsea goals, the first appallingly, the second accurately, but neither happily. Add to that the Maguire incident, and a penalty appeal that saw Willian booked for diving and Chelsea will feel rightly aggrieved. By the end of the game there were huge spaces in all parts of Stamford Bridge, and it wasn’t a comment on their team, but the circumstances. ‘It’s not football any more,’ sang those that remained. It is, but not as we want it. 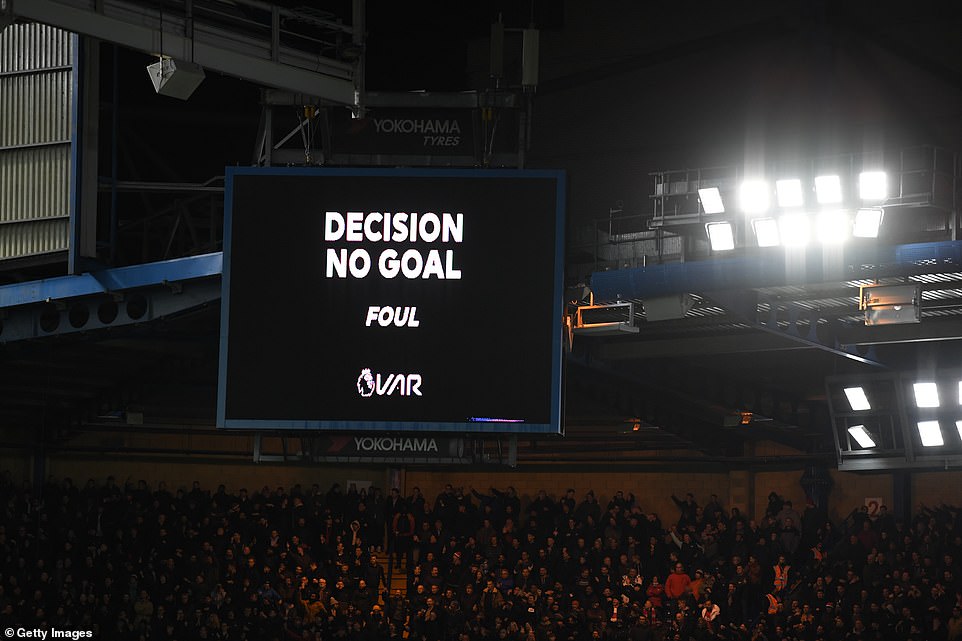 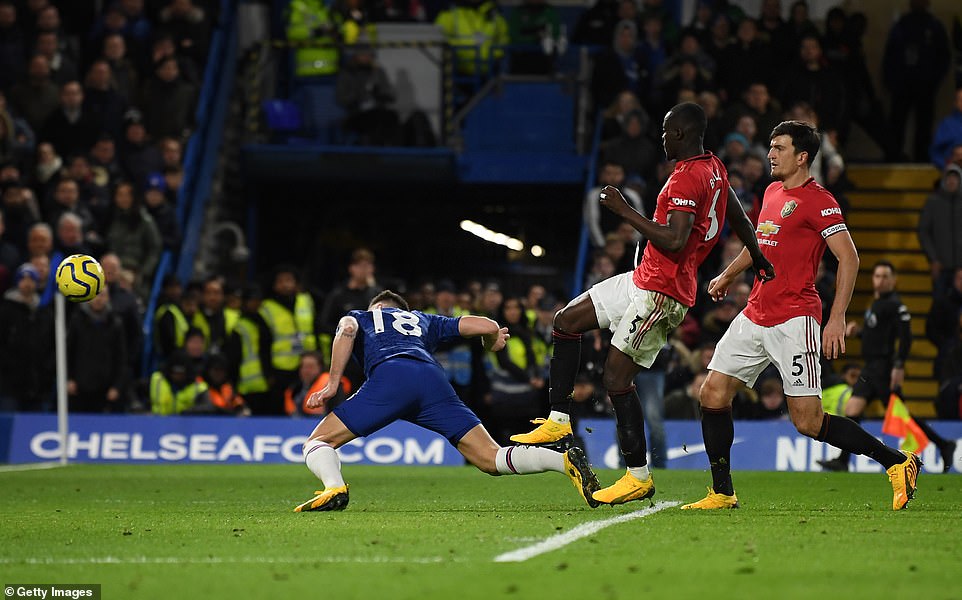 Olivier Giroud, who replaced the ineffectual Michy Batshuayi, steered home a header but was soon ruled to have been offside

First, the travesty. Zouma thought he had equalised after 55 minutes from a corner, but Manchester United defender Brandon Williams had tumbled to the floor. Kavanagh’s VAR’s antennae was, of course, twitching furiously. No goal.

Williams, Kavanagh said, had been pushed to the ground by Cesar Azpilicueta, although it looked as if Azpilicueta had been pushed into him by Fred in the first place. The official explanation was that Kavanagh felt Fred and Azpilicueta’s contact was natural, but Azpilicueta had both his hands out when he went into Williams. Of course he did, it’s the natural protective position when faced with collision. What’s he supposed to do – lead with a broken nose? Kavanagh has either never played football, or never been in a crowd.

And it seems VAR doesn’t do benefit of the doubt to any players but defenders these days. Fred’s involvement was ignored, Azpilicueta’s wiped Chelsea’s slate clean. 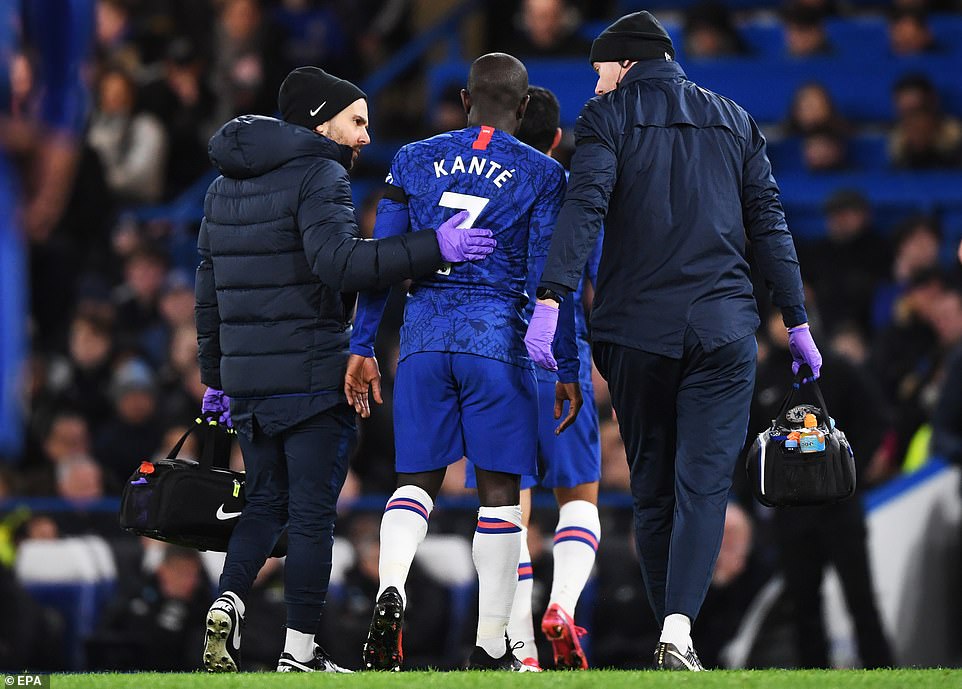 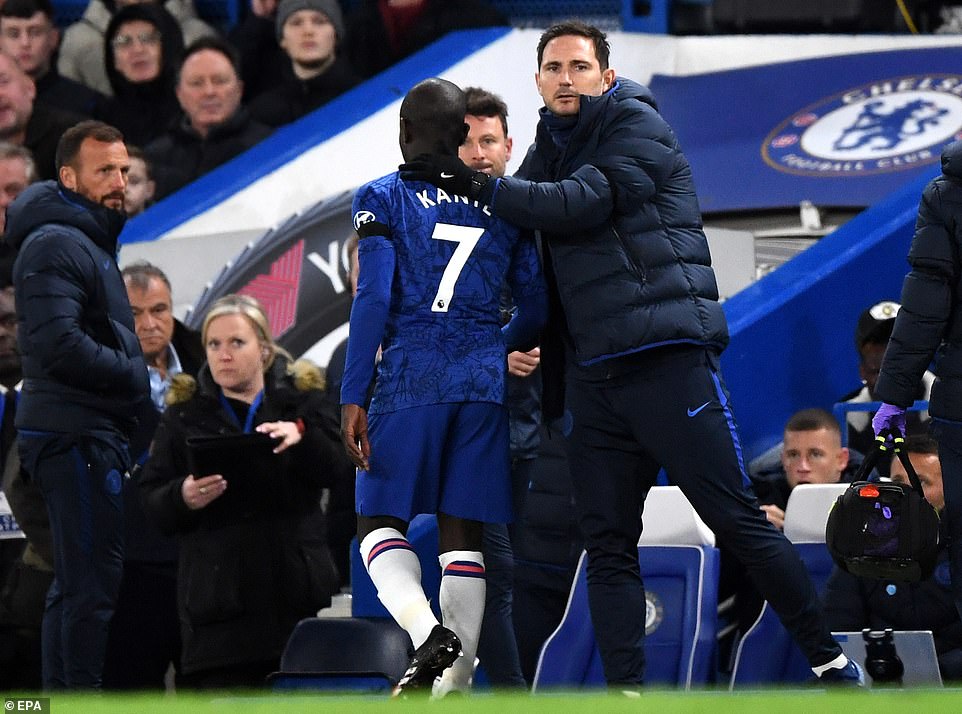 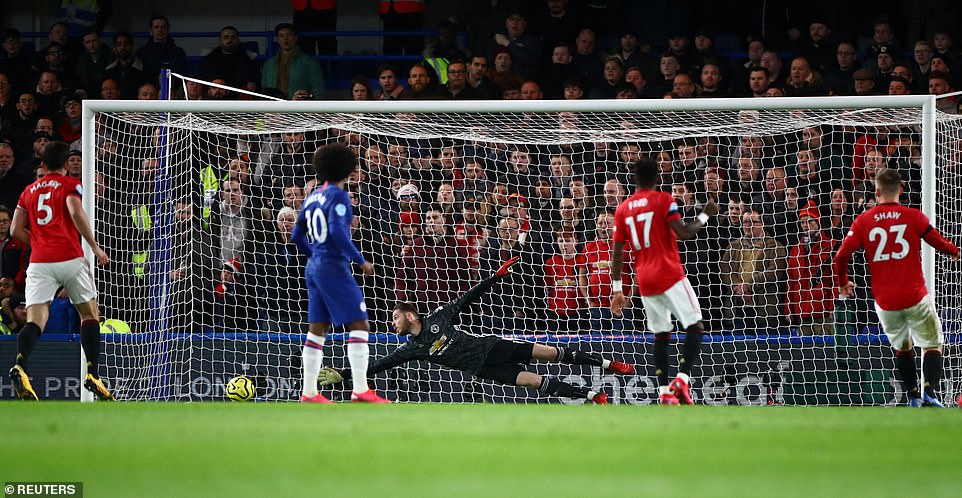 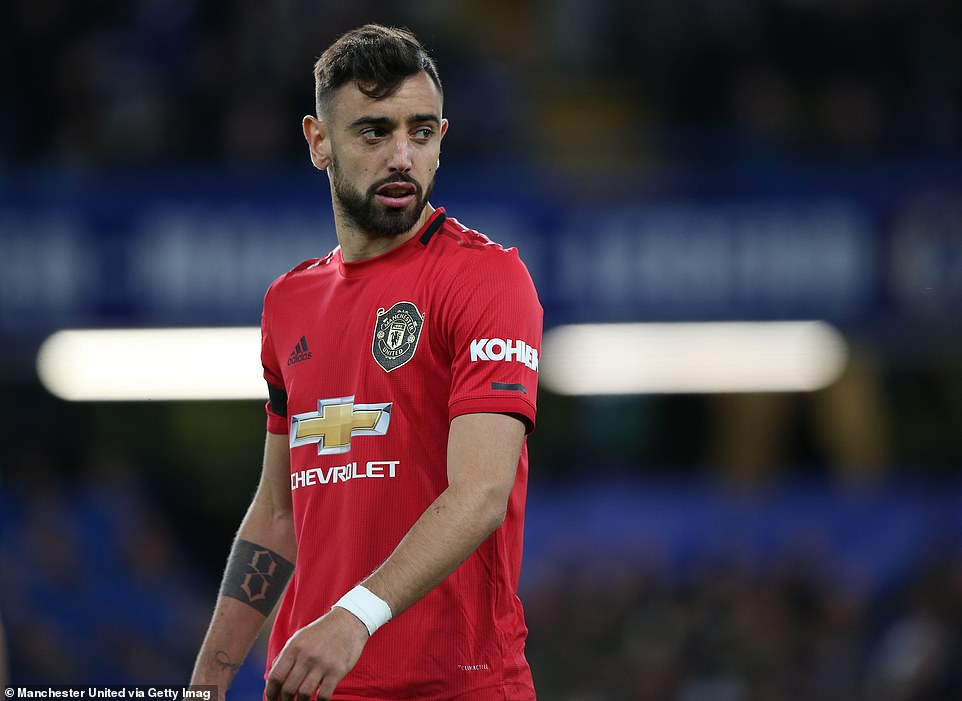 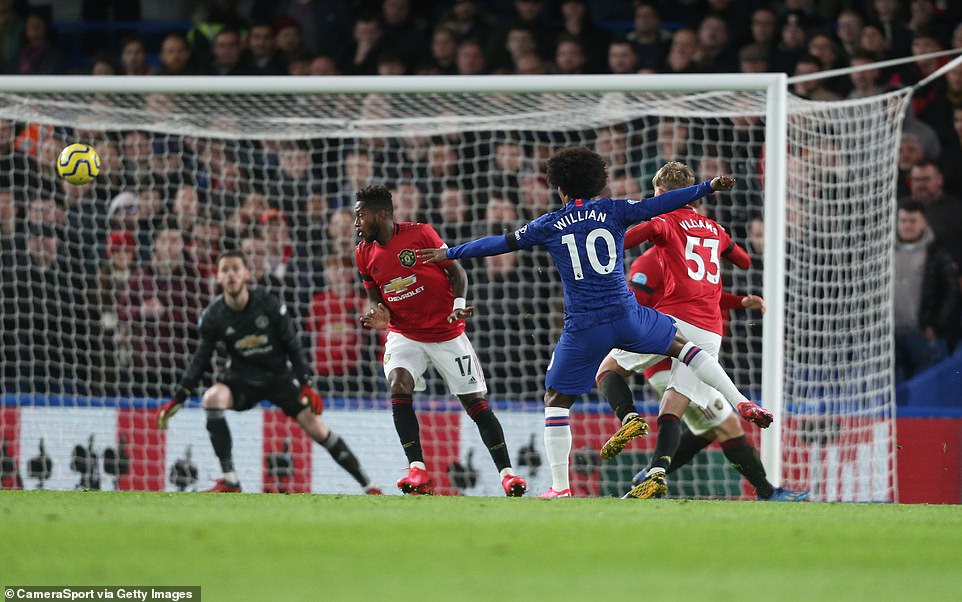 The irony is that in ruling on Maguire and Batshuayi, Kavanagh must have taken a protective stance into account. The United defender ended up on his back in the Chelsea technical area, tussling with Batshuayi. As the Belgian’s momentum carried him towards Maguire’s upturned studs the United man instinctively took action and seemed to straighten his leg towards his opponent as protection, catching him in a sensitive area. This time, context was applied and it was decided there was no violent conduct. Maybe Kavanagh was simply surprised that Batshuayi finally got two balls together.

After 36 minutes, Willian went down on the cusp of the penalty area trying to get past Fernandes. Chelsea appealed furiously for a penalty, referee Anthony Taylor booked Willian for diving. The replays were hardly conclusive. Many thought Willian had gone looking for it; others that he had surely found it. Again the coin toss went United’s way.

Finally, after the visitors had scored their second, substitute Olivier Giroud, finally on for Batyshuayi, looked to have pulled one back with a lovely diving near post header. His toes, however, were offside when the ball was played. It was letter of the law right, but coming after the previous call it rather stuck in the craw. Had Odion Ighalo not then missed the best chance of the match late on, it would have added insult to injury, and made for a highly unrepresentative scoreline. 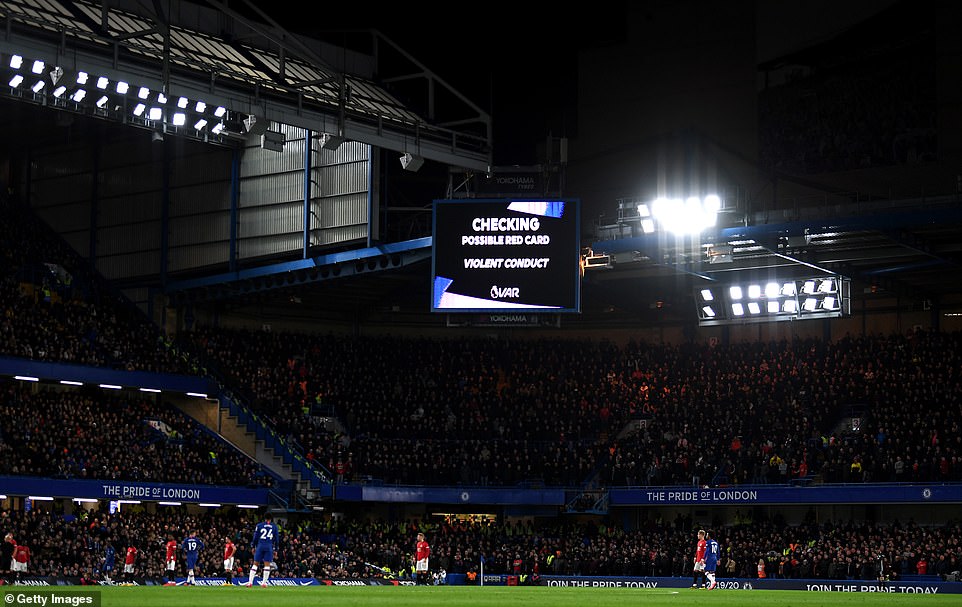 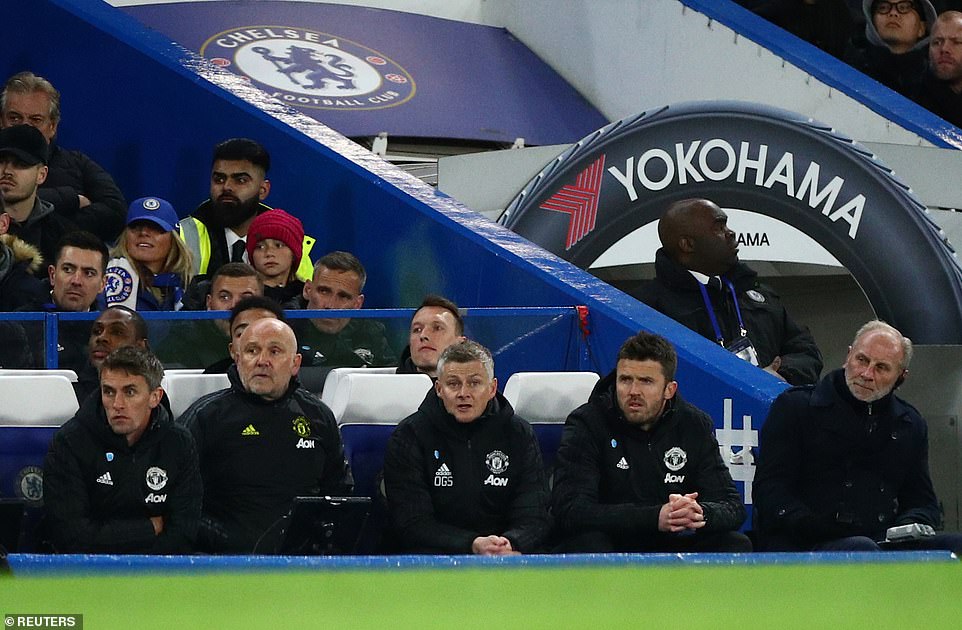 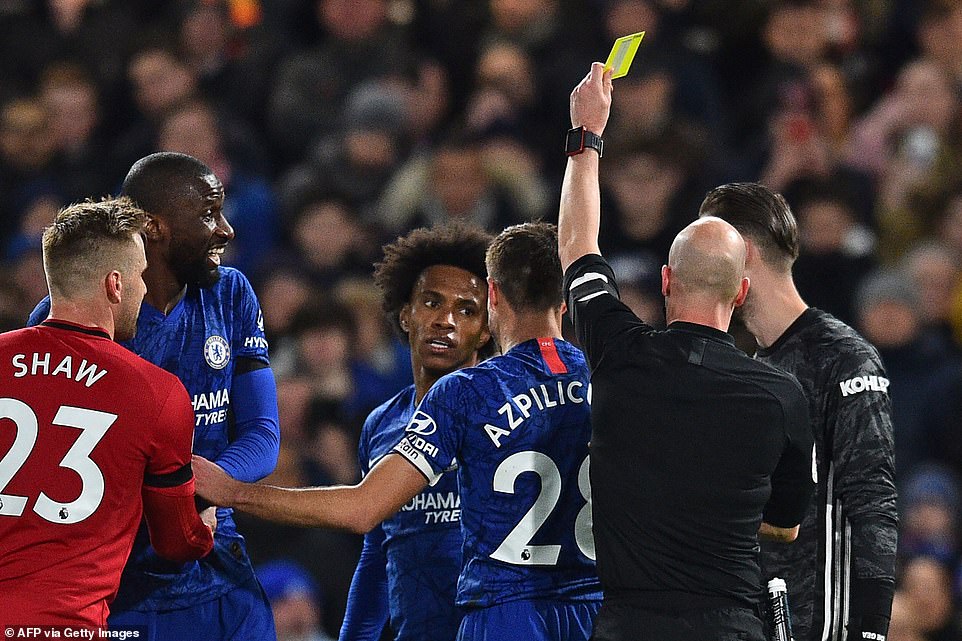 ‘I could shine in Liverpool’s front three’: Benteke rues not being...