‘Hopefully this will be a turning point’: Liam Cooper confident Leeds’ win against Bristol City can boost their promotion charge

By Ross Heppenstall For The Daily Mail

Certainly this dominant victory will pour confidence into Marcelo Bielsa’s side after their recent horror run. 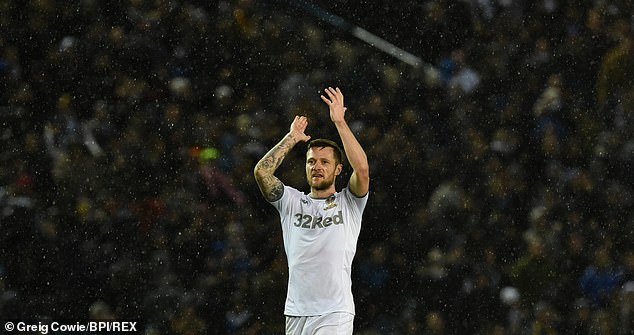 Fears of burn-out? You must be kidding.

A return to the Premier League after a 16-year absence and a place in Elland Road folklore? Bring it on.

At least that was the way captain Liam Cooper was talking after Leeds had seen off a top-six rival with a win that was far more comfortable than the scoreline suggests.

Luke Ayling’s 16th-minute strike, a close-range left-footed finish against his former club, was enough to send them three points clear of third-placed Fulham with 13 games remaining.

With none of their promotion rivals managing to registering a victory, it was a near-perfect day for Bielsa’s side. 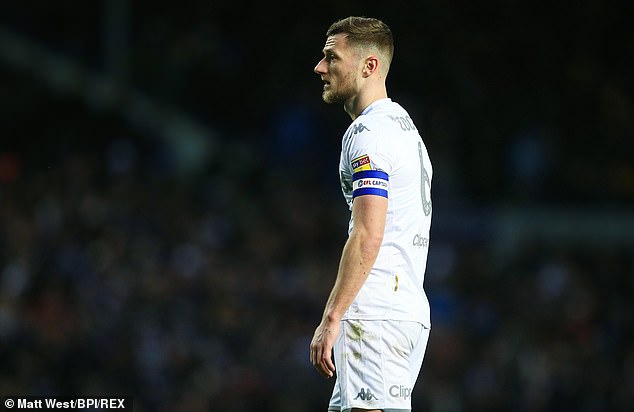 Asked about the significance of that three-point cushion, Cooper said: ‘We don’t care what other teams do, we’ve just got to look after ourselves.

‘Too many people get wrapped up in points and other teams but we always believe in ourselves.

‘We’re confident in the way we play and our philosophy so we’ve just got to keep chalking the games off and be bang at it every week.

‘Momentum is massive in any league and you’ve got to go and put runs together.

‘Hopefully this will be a turning point for us and we can go on a run now.’ Leeds held an 11-point advantage over third place in December but that had been completely wiped out heading into Saturday’s game.

Spanish goalkeeper Casilla has made numerous costly mistakes during that dismal run but he was a rain-soaked spectator for much of this game as Lee Johnson’s side created next to nothing. 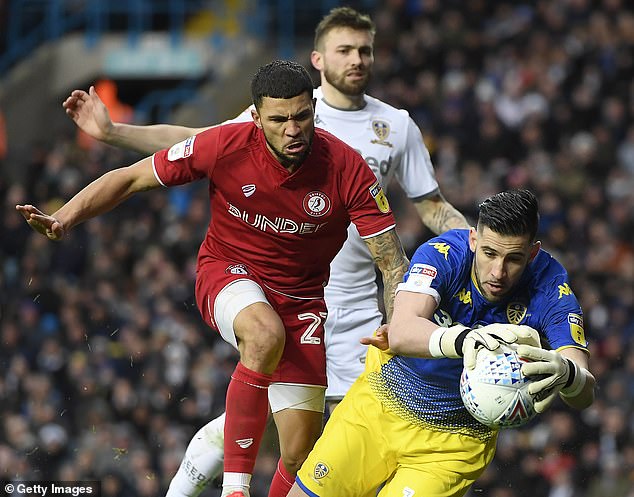 Kiko Casilla, who has received much criticism recently, kept a clean sheet versus Bristol City

‘He’s come in for a bit of stick but he’s a confident lad. That clean sheet was for him today. He deserves it.

‘He never changes the way he plays and he’s a great lad. We’re absolutely buzzing for him.

‘We do our jobs and stick together through thick and thin.

‘We’re an honest bunch and if one messes up, another one will bail him out. That’s the way it’s got to be.’

Homegrown midfielder Kalvin Phillips returned to the side after a three-match ban in last week’s 1-1 draw at Brentford and his presence is again proving crucial.

He bossed proceedings against the Robins as Leeds had 69% possession and 21 shots but only Ayling’s strike to show for it.

Patrick Bamford had a goal disallowed for offside in the first half and Jack Harrison hit the bar late on.

Cooper admitted: ‘I’d love to be four-nil up at some point in the season!

‘I suppose it’s the Leeds way – we keep you on the edge of your seats.

‘But the intensity and will to win in these past two games has been unbelievable. 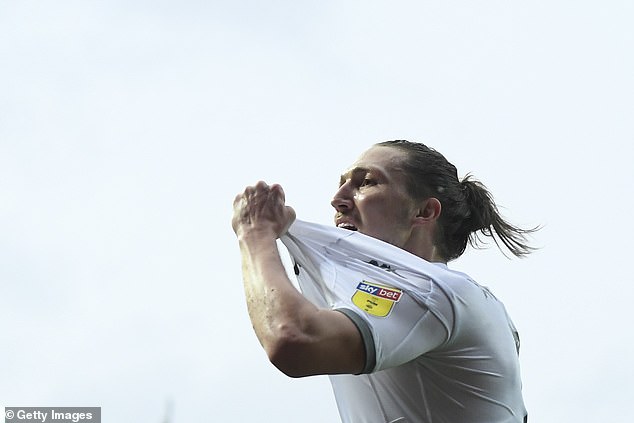 ‘We’ve got to keep that going now and that’s the message to the lads.’ Leeds has felt a city on the edge in recent weeks as Bielsa’s side have faltered.

There is a desperation to finally return to the top flight and the white-knuckle ride will only intensify in the coming weeks as the run-in approaches.

Cooper was asked about a potential repeat of last season’s promotion failure and burn-out due to Bielsa’s notoriously gruelling regime.

Cooper said: ‘To say we are tired and blowing out is nonsense.

‘When you’ve got a chance to get out of this league, tiredness is not a thing.

‘There is so much to play for and going to the Premier League could be a life-changing experience.

‘This club has been starved of top-flight football for so long, for whatever reason.

‘But we’ve got a real chance and we’ve got to hold on to that. It is life-changing and could be unbelievable for the city and the club.

‘We see the legends plastered all over the walls at the club and if we approach it in the right manner, why can’t we go and remembered at this club forever? We’ll fight to the end.’

DANNY MURPHY: Hitting winners against Man United, Best v Messi and why I could’ve been a lawyer