By Adam Hathaway For The Mail On Sunday

Sam Simmonds boosted his chances of a relaunch in national colours with two tries as Exeter booked a home Champions Cup quarter-final.

The No.8 missed most of last season with a knee ligament injury after winning seven caps up to March 2018 but impressed here just before Eddie Jones names his 6 Nations training squad.

Simmonds, 25, scored one from a driving maul and one pushover try from a scrum making the most of dominant performances in the front row from prop Harry Williams and hooker Luke Cowan-Dickie. 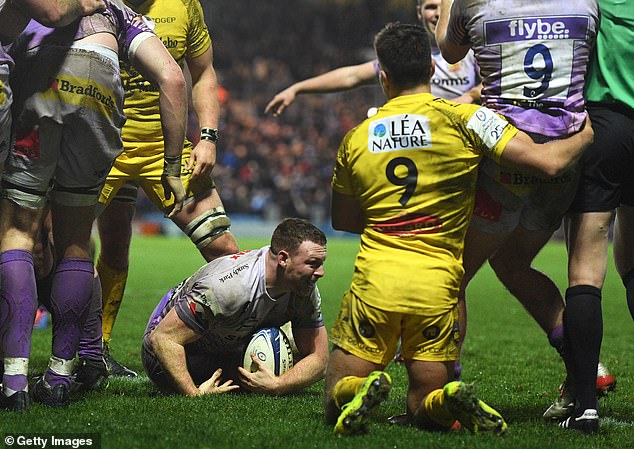 That duo are odds-on to be named by Jones tomorrow (MON) but Simmonds is making a case since his comeback at the end of the last campaign.

Exeter director of rugby Rob Baxter said: “He is a pocket rocket really for a back rower. He is very, very powerful. In his growing maturity he is becoming one of our leaders. He is driving things on the field and demanding things of the team around him He is just playing very well.”

Exeter overcame a first half yellow card for new Scotland captain Stuart Hogg, and leaking two scores before the break, but Simmonds had the bonus point score on 57 minutes and Chiefs finished in style. 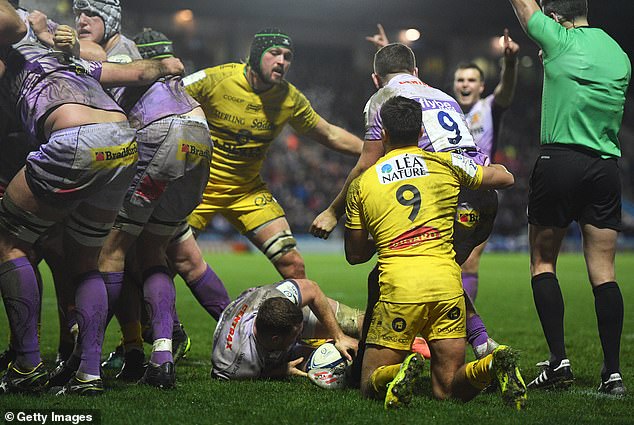 Simmonds, 25, scored one from a driving maul and one pushover try from a scrum

Their fifth try came with a sweeping 70 metre move with replacement scrum-half Stu Townsend finishing it off to complete a second half which Exeter won 19-0.

Baxter added: “At half-time we simplified things, we talked about getting emotional and being tough and the game changed. It looked like two different teams.”

Exeter pulled one of their oldest tricks out of the bag when they shoved Cowan-Dickie over from a rolling maul in the 12th minute.

But when Fijian wing Kini Murimurivalu came off his flank to score in the left-hand corner Exeter knew they were in a game.

Flanker Dave Ewers was their next scorer, in the 20th minute, when he was driven over, again from short range, after position had been set up by Hogg’s break.

But Hogg was then yellow-carded, and La Rochelle given a penalty try, when the Scot was penalised for a deliberate knock on on his own 22 but Chiefs had plenty in hand and were easy winners. 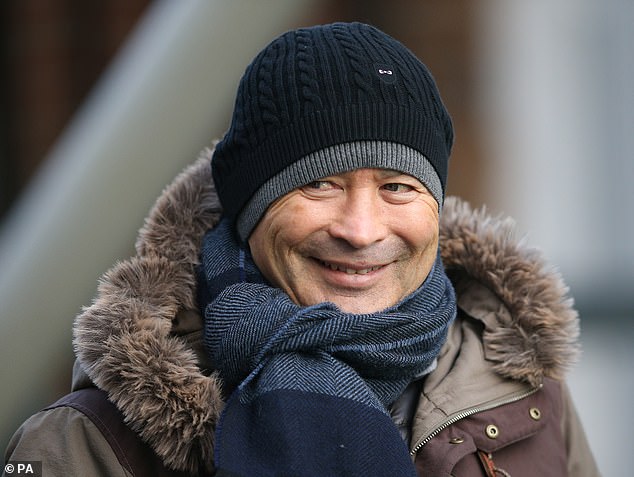