Little is certain in elite sport but England will be as sure as they could possibly be now that Ollie Pope will go on to become their next great Test batsman.

Rarely can a maiden Test century have been as complete as Pope’s unbeaten 135 as England seized control of the third Test and, quite possibly, this series by initially batting with solidity and then with real flair and fluency against South Africa.

It propelled them to giddy heights seldom seen in these fragile times as England raced to 499 for nine, one run short of 500 in their 500th overseas Test, before Joe Root, somewhat bizarrely, had the luxury of declaring for the second time in the innings. 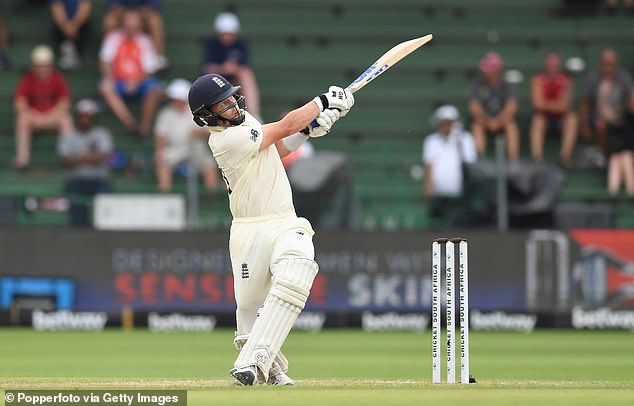 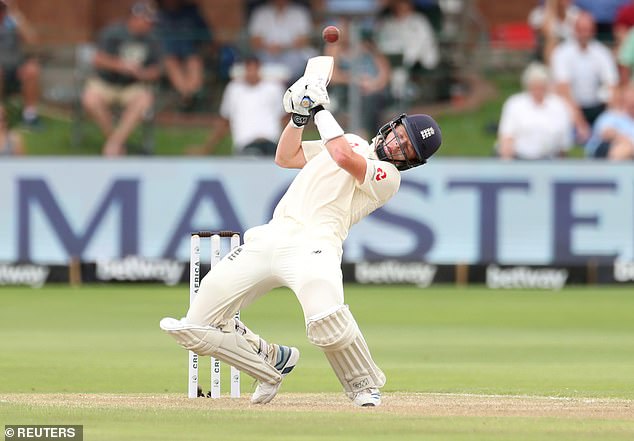 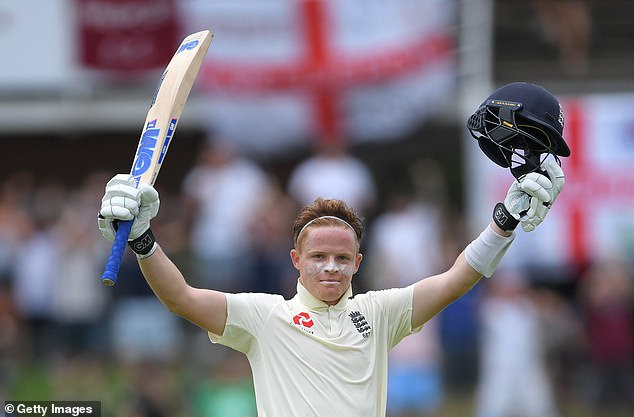 Then Dom Bess, the inexperienced spinner thrust into a crucial role here, made significant inroads into the South African innings by dismissing both Pieter Malan and then Zubayr Hamza after he had been roughed up by the sheer pace of Mark Wood.

South Africa were on 60 for two when the rain that had delayed the start of the second day returned with 25 minutes play remaining and have much to do if they are to head to Johannesburg next week still all square.

The England captain had earlier called his batsmen in at the ‘fall’ of Wood’s wicket when they had made 467 before he then ‘undeclared’ when Kagiso Rabada was found by replays to have overstepped.

Really, umpires should go back to calling no-balls on the field, just as they have done throughout cricket history, rather than relying on the TV cameras or go the whole hog and introduce ‘goal-line’ technology. Either has to be better than the current shemozzle of on-field umpires abdicating all responsibility for an integral part of their job.

It just about capped the most miserable of days for South Africa’s spearhead who started it by being controversially suspended for the final Test on his home ground at the Wanderers when the ICC handed him a fourth demerit point within 24 months for his over-zealous celebration of Joe Root’s wicket on day one.

The news at the start of this second day sparked considerable debate over whether Rabada should be banned under the totting up procedure and Nasser Hussain’s exchange of views with Michael Holding on TV was particularly compelling. But this just feels wrong.

Rabada has always trod dangerously close to the wrong side of Australia’s infamous ‘line’ with his behaviour and a personal view is that he was lucky not to be disciplined for his over the top reaction to dismissing Zak Crawley in Cape Town.

But this incident was not as bad and common sense should have prevailed. Instead South Africa will be without one of their most important players in Johannesburg and the final Test will be lesser for it. Not for the first time, the ICC have misjudged the mood. 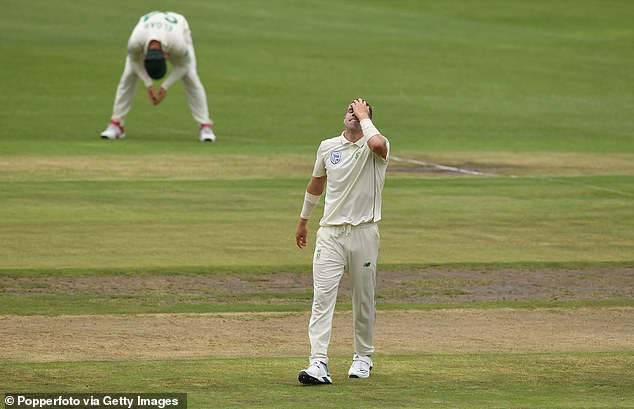 None of which should concern England. They started the second day with their noses in front but soon galloped clear of South Africa in the form of the current superstar of their team and a young batsman surely destined to join him in that exalted company.

Ben Stokes had his anxious moments on day one but now he was in total charge, spectacularly going after the spin of Keshav Maharaj that had been so threatening on the first day and hitting him for two sixes in another gem of a contribution.

Stokes went to 4,000 Test runs when he clipped Maharaj to the boundary to reach 95 and then celebrated his ninth Test century in under-stated but meaningful fashion with the amputated finger gesture he now uses to pay tribute to his seriously ill father. 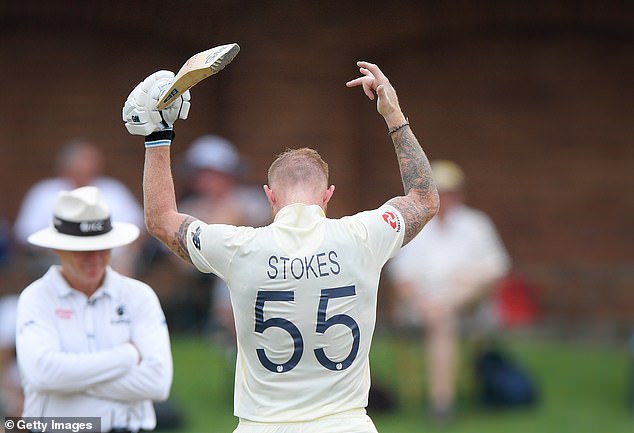 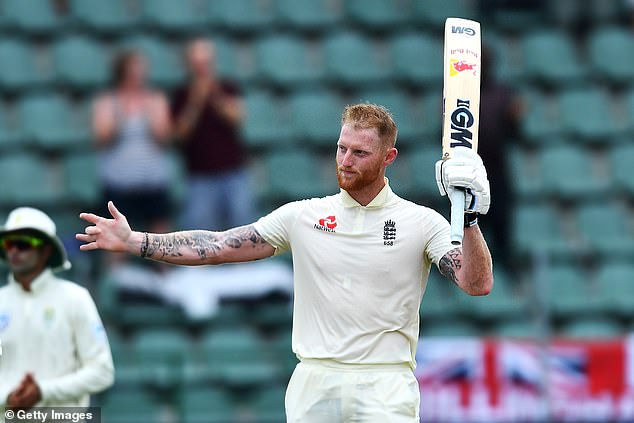 Yet for once Stokes was to be out-shone by the latest gifted 22-year-old product of the Surrey production line in Pope.

The pair had come together with England rocking on 148 for four but they had added 203 before Stokes became a first Test wicket for Dane Paterson and Pope took over to show the full repertoire of his stroke-play, only slowing down within sight of his century.

Once he had got to what will surely be the first of at least 20 Test centuries – please let the grand old game last long enough for him to get there – Pope celebrated with gusto and then showed he can improvise in the modern way as well as play classical strokes.

The most remarkable of them came when he reverse ramped, there is no other term for it, Rabada for consecutive fours in an over which also saw the Wood no-ball reprieve and the reverse-ferret non-declaration from Root.

Somehow Rabada kept the cool that had expensively eluded him on Thursday but that was not the end of the punishment, the returning Wood enjoying himself in smashing five sixes off Maharaj in his 23-ball 42. In all, 73 runs came in eight overs after tea for England, 32 of them after the Rabada no-ball. Maybe that was worth more of a scream from Rabada. 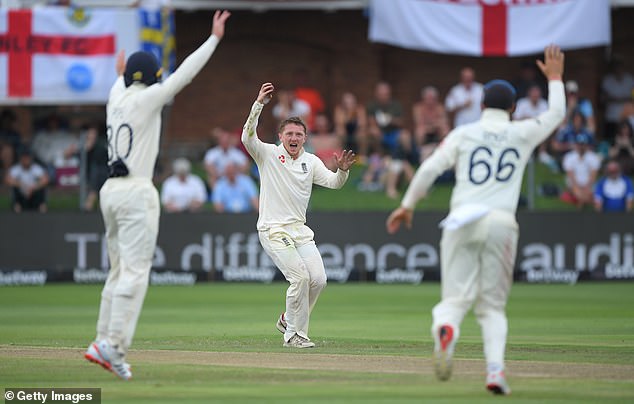 Dom Bess managed to get two wickets late in the day to leave SA on 60-2, trailing by 439 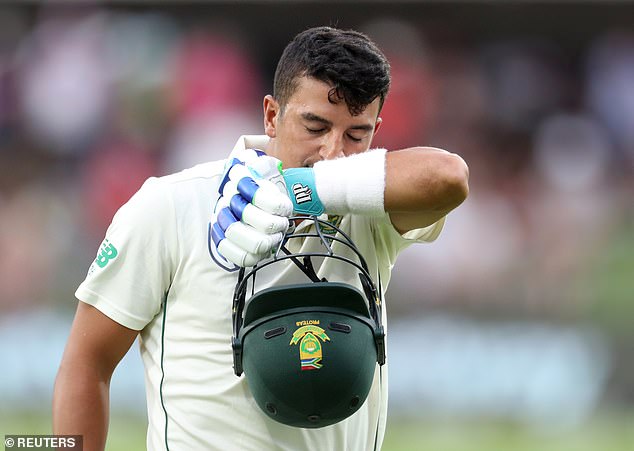 Maharaj, the principle South African threat on a pitch already taking big turn, ended with five wickets but they came at considerable cost, the 180 runs he conceded representing the most by a South African in a home Test innings.

England’s spinner in Bess was on for just the eighth over of South Africa’s innings and quickly made things happen, snaring Malan with a return catch that initially appeared to be a bump ball and then having Hamza caught round the corner after Wood had startled him with speeds reaching 93 miles per hour.

Advantage, indisputably, to England and only more of the forecast rain over the weekend in the Eastern Cape could hold them up now as much as South Africa.