Eliud Kipchoge will not let his achievements be reduced to a pair of hi-tech shoes.

For the man who in October became the first person in history to run a sub two-hour marathon, Nike’s controversial trainers only help so much.

By way of analogy, the philosophical Kenyan turns to Formula One and his favourite driver Lewis Hamilton. 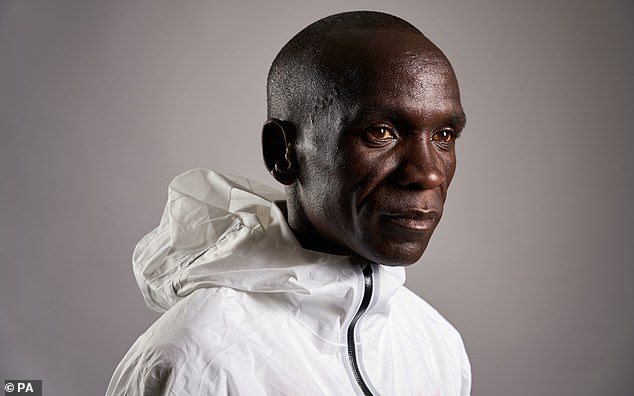 Eliud Kipchoge insists that his talent wins him marathons, not his Nike running shoes 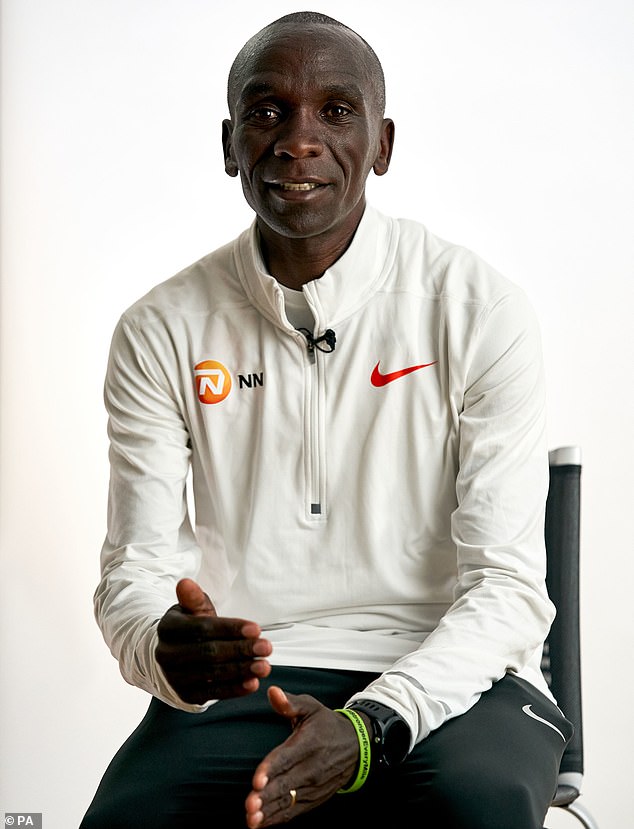 ‘I thank Nike for the good shoes. They are doing a great job,’ he says when asked about his 1:59:40 marathon in Vienna and the other distance running records that have recently tumbled.

‘But you know that above all it is the person themselves. I will give you an example. We have 10 teams in Formula One, with the great engines, and the great tyres from Pirelli but only Lewis Hamilton is winning. Why? Because he is focused and he is a very good professional driver.

‘I met him in Abu Dhabi and I realised that to win it is not the tyres, it is the person.’

Surely the shoes do give someone an advantage?

‘You know, what makes a human being is his conscience,’ he replies.

‘If you don’t believe you can run fast, even in the best shoes you can’t do it.’ 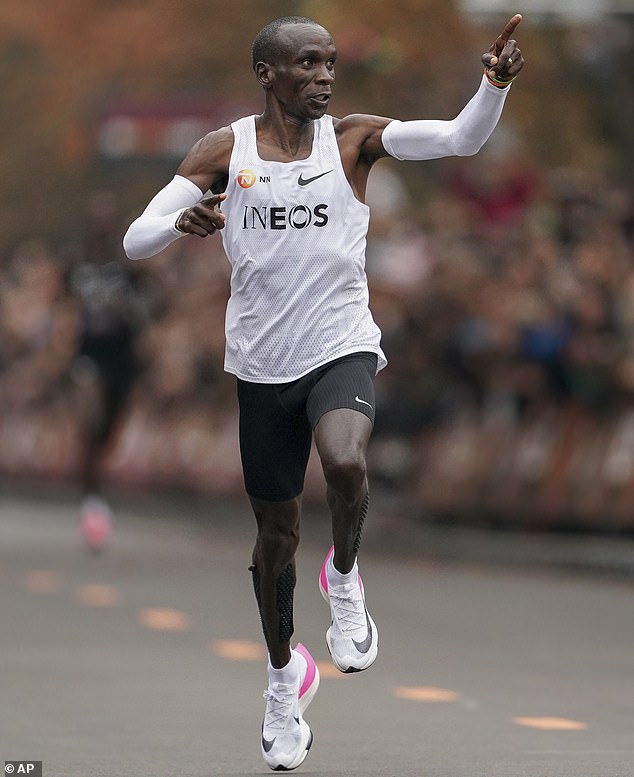 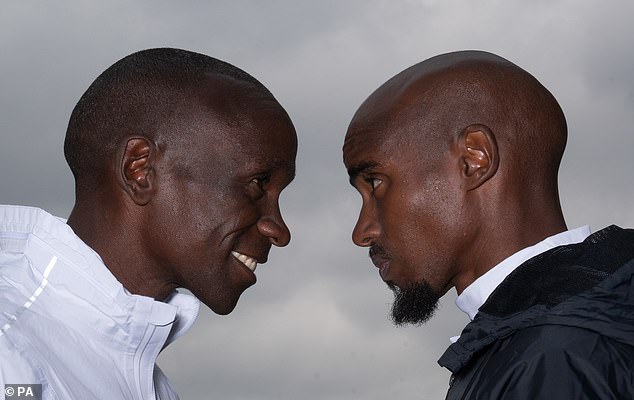 When quizzed on the other Nike controversy this year – that of disgraced coach Alberto Salazar – Kipchoge says he will not comment, pointing to the fact he trains in Kenya not the now-defunct Nike Oregon Project..

The 35-year-old appears to want to float above it all, and not let it cloud what has been a remarkable year, which will culminate in him picking up the World Sport Star of the Year award at Sunday’s BBC Sports Personality of the Year ceremony.

Next year, he plans for further accolades, with a fifth London Marathon victory in his sights. Yet he admits it was tough to motivate himself after his Vienna exploits.

‘It is a little difficult to determine the next call,’ he says. ‘But I trust that when I wake up every day is another challenge. I will take a big challenge in London next year to win for the fifth time, it is not easy. It is a big challenge now.’ 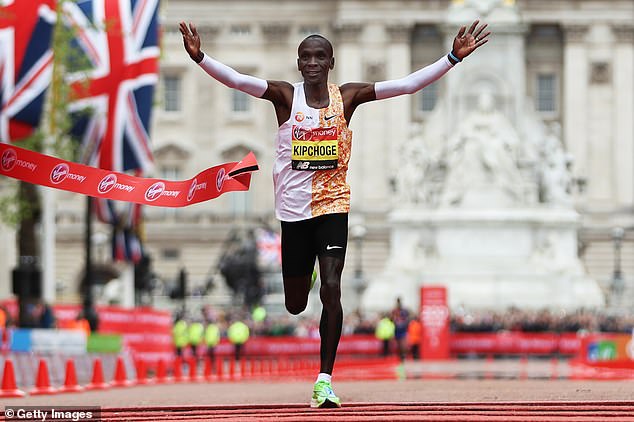 He is the first athlete to be signed to run in London, but one man who will definitely not be lining up alongside him is Mo Farah, who recently announced he is returning to the track for Tokyo 2020.

On that decision, Kipchoge says: ‘Personally I respect Mo Farah as a sportsman and as a human being, and I respect the conscience of Mo Farah and his team. So if the decision is to go back to track, then that is the best, you know. This is sport – you compete where your mind wants to go.

The London Marathon is Kipchoge’s only firm plan of 2020, and he reveals Tokyo is not a certainty. 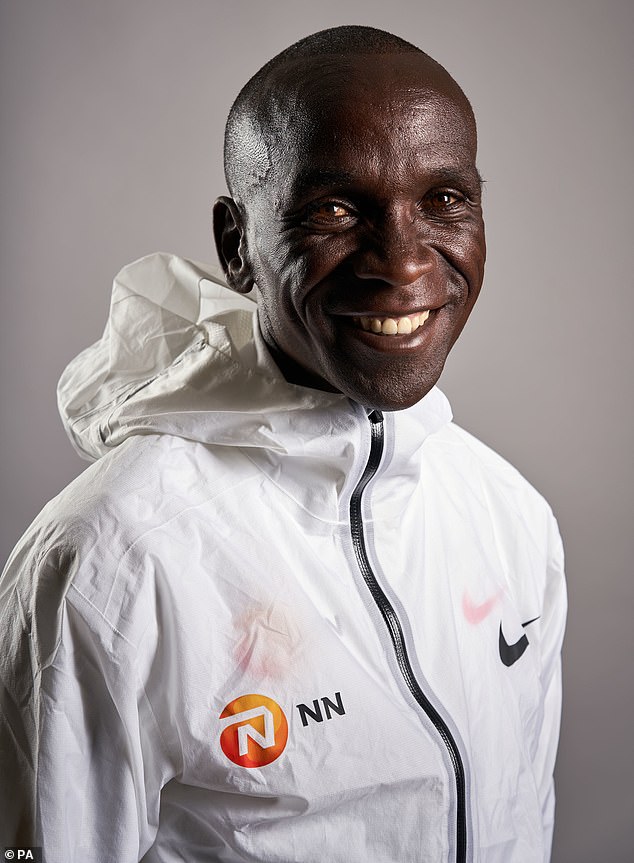 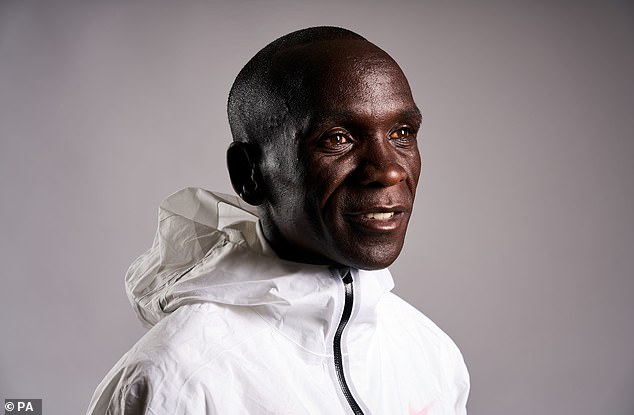 Kipchoge is not a flashy man, he is humble and prefers to let his running do the talking

‘I think my biggest challenge now is London, and you know I have only one mind and two legs, and these two legs just ran in London and then come back to running in other races. So I think I need to concentrate purely on London, and then other things will come up.’

Pressed on this point, he adds: ‘It is about selection. Given a chance I will go. The decision will come after April.’

Kipchoge is not a flashy man, he is humble and softly-spoken and clearly prefers to let his running do the talking. Indeed, at his training camp in Kenya he does not balk at cleaning the toilets or getting water from the nearby well.

In that vein, there were not wild celebrations after his Vienna performance. And on Christmas Day, Kipchoge says he will probably do an ‘easy’ 20km run.

Any guilty pleasures? ‘I eat chocolates maybe two, three times or four times a year. I am not a fan of that.’

Real Valladolid players were ordered to lose each half against Valencia...