Asked to sum up his year of bad luck and bandages, the Exeter and England star says: ‘I’m not going to use the word ‘disappointment’ but that’s on the tip of my tongue.

‘Erm… frustrating… but a big learning experience.’ Nowell might have been part of teams that won medals in big tournaments this year but finishing second in the Premiership and at the World Cup is no silver lining for a competitive Cornishman. 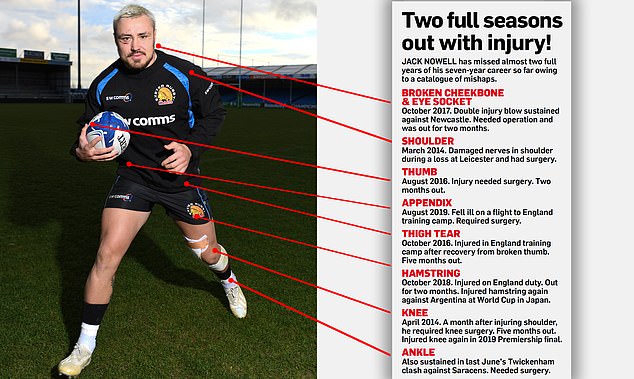 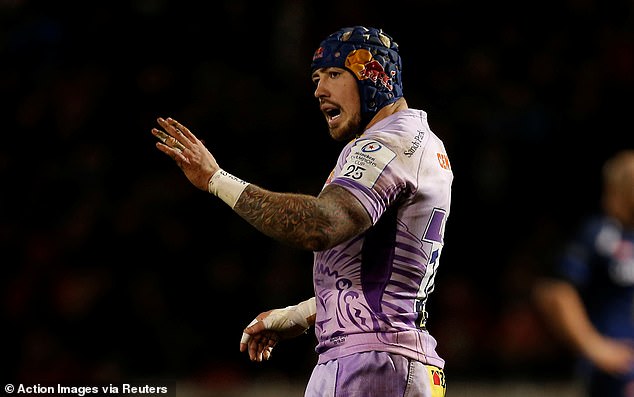 Those defeats at Twickenham in June and Yokohama in November were not the half of it.

For 2019 was the year Nowell’s tally of surgeries overtook the number of finals he has played in.

Sitting at Sandy Park, the 26-year-old looks down at himself and starts counting up the body parts that have required operations.

‘Six I think I’m on? No, seven. Two ankles, knee, thumb, eye-socket twice and my appendix now.’ It is a list that would make most wince – but for Nowell, rugby’s reality. 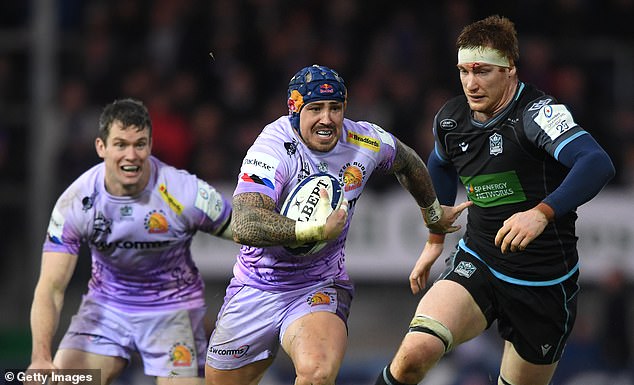 In October 2018 he tore a hamstring with England which kept him out until January.

When back his superb form propelled the Chiefs to another Premiership final.. Agonisingly, Exeter lost it to Saracens again despite Nowell’s stupendous show – and worse still nine minutes from the end he twisted nastily in a tough tackle.

‘I did the ligaments in both unfortunately.’ Luckily the knee did not require surgery, but the ankle did. Nowell was picked for the World Cup despite his issues and flew to Treviso in Italy for a camp in August, hoping to run again when he arrived.

‘Then my appendix burst,’ he explains to the Mail on Sunday. 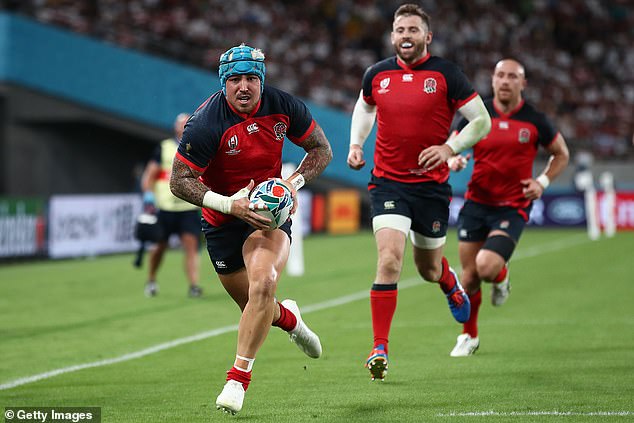 ‘It was on the plane to Italy. I thought I had food poisoning as I had a sore stomach, but didn’t want say: ‘I think I need to go to hospital’ and then go and there’s nothing wrong with me.

‘I was fighting it as much as I could but the doctor intervened.

‘I had it whipped out the next day, was in hospital for four days, came out on the Thursday and ran on for the first time since the final on the Friday.

‘It was all happening at once.’ Surely there would be no more pins stuck in his voodoo doll? Nowell went to Japan with England and, finally, played the last 12 minutes against Argentina, scoring an acrobatic try. 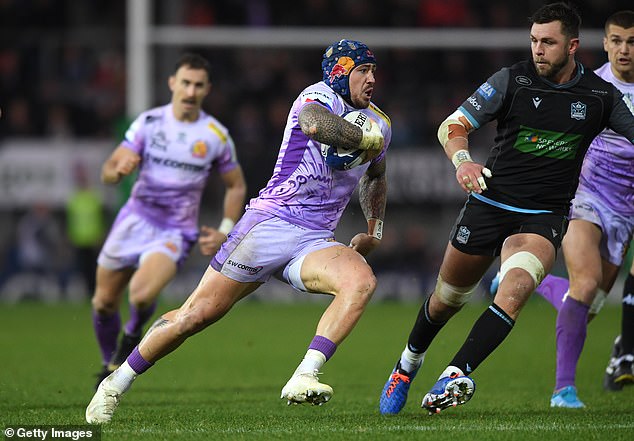 ‘Then I tore my hamstring,’ Nowell continues. Another battle began.

‘We had the France game cancelled so I got myself fit for the semi-final,’ he explains looking back.

‘But I’d had limited game-time, a handful of training sessions, so to be chucked into a semi-final or final – there’s no way.

‘It was such a big game, so I wasn’t really expecting to be picked.’ It became the second World Cup in succession that Nowell watched largely from the stands.

He felt privileged to be there, loved Japan and was proud of England’s ‘awesome’ performances particularly against Australia and New Zealand.

But it was not the same as playing his part in the run to the final. 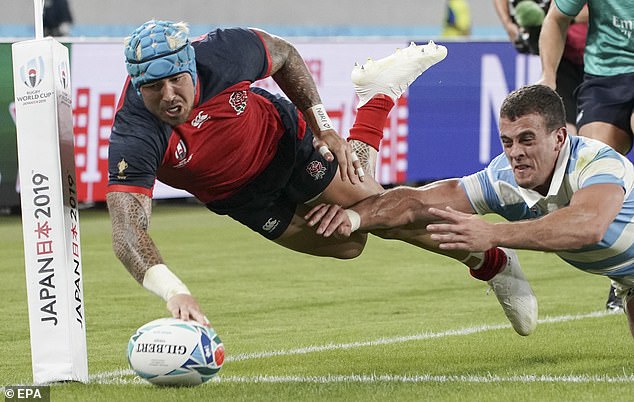 Even the most exuberant of characters like Nowell, whose hair is now cropped short and dyed blond and body is covered in tattoos linking him to his fishing roots, can see their sunny disposition clouded as injury curses continue.

‘There are times when it does get pretty dark and you think ‘why can’t I get a break?’ but I have good people around me that are able to pick me up again.

‘It won’t last forever. I’ll get better, have a comeback. You have to keep being positive.’ An all-action style can lead him to these accidents more readily, but changing his game is not in Nowell’s nature.

‘I try to fight for every inch to stay on my feet,’ he says.

‘People say to me sometimes: ‘why don’t you just go down once you’re tackled and you won’t get injured’.

‘If I didn’t play like I do I wouldn’t have represented my country or gone on a Lions tour.’ Nowell has kept his silver medal from Japan, but you will not find the trinkets of his career around his house. Now with an 18-month-old daughter, Nori, he prefers to switch off when home.

‘Obviously I’m very proud of what I’ve achieved but to have a shirt up on the wall that you look at puts you back into thinking about rugby,’ he explains. 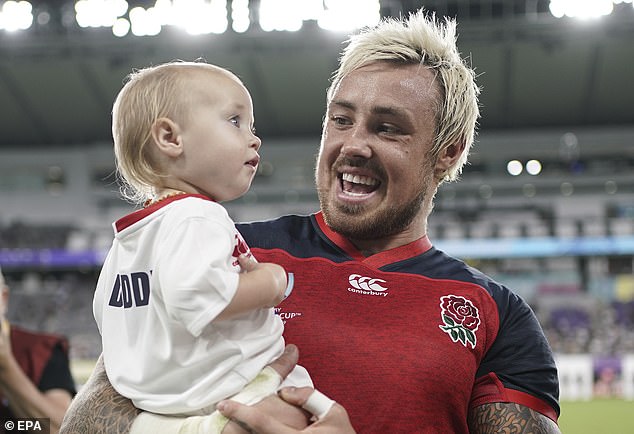 ‘It’s a big no-no in my house. I go home to do stuff with my daughter and am completely away from rugby. She doesn’t know what it is, and my missus is probably the same!’ There is plenty to fill wall and cupboards as Nowell is one of Exeter’s pioneers.

Part of the first foray of Chiefs to play for England, he is to date their only home-grown Lion, conquering new land domestically and with sights set on the continent.

‘Everything is a new experience and challenge for us,’ he says.

‘You can’t really turn to the older players and say ‘what did you do in that situation?’ as no one has done it down here before.

‘Setting new heights for this team is awesome – when Henry Slade, Luke Cowan-Dickie and I are all retired we’ll be those guys. Maybe we’ll hide in the corner!’ There will be no hiding today. Win against Sale in the Champions Cup and Exeter could qualify for the knockout stages for just the second time in their history, if results go their way. 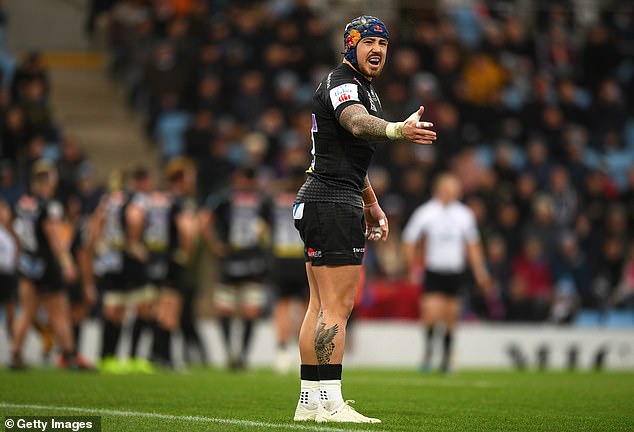 Do it and there will be no big celebrations at Sandy Park, though.

‘We’re not trying to just get out the pool, we want to win this competition,’ says Nowell, now fit and firing.

Which leads on to his hope to turn the frowns of 2019 upside down. This time next year, what does he want to reflect on?

‘Win the Premiership and the Heineken Cup. Hopefully in a year’s time and I can say we’ve done that.’

Jos Buttler a doubt for second Test against New Zealand with...