Some things at Barcelona don’t change: according to El Mundo Deportivo a group of journalists from France Football were in the city on Monday and it seems almost certain they were there to meet with Lionel Messi ahead of officially awarding him the Ballon d’Or next week – the sixth of his career.

But other things at Barcelona are changing. They no longer rule over the Champions League. The competition they won three times in six years from 2009 is proving harder to obtain than ever.

Messi himself announced to supporters at the start of last season that he wanted to bring that ‘beautiful trophy’ back to Barcelona. A nightmare on Anfield Road shot down that dream. 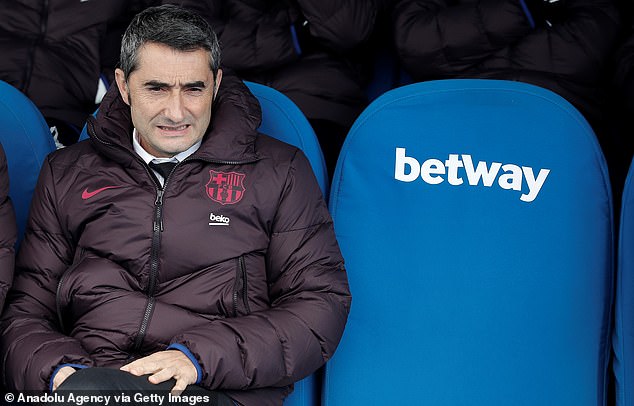 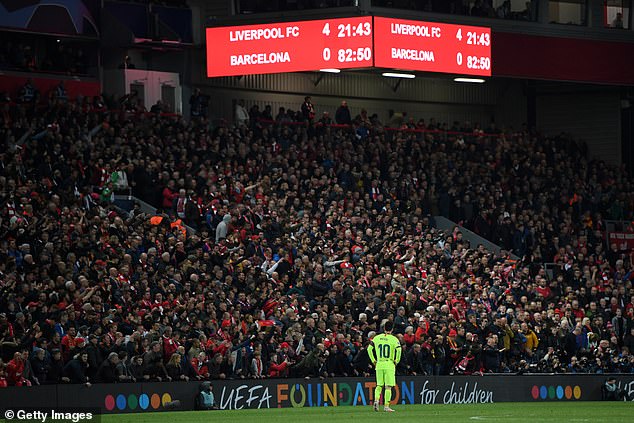 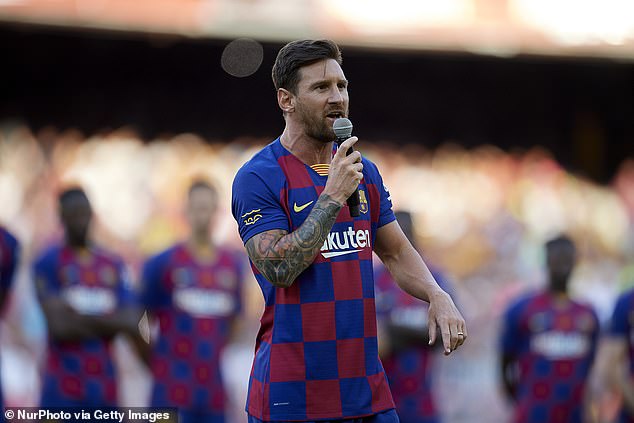 Speaking at the Gamper Trophy, Messi urged Barcelona to reclaim the Champions League 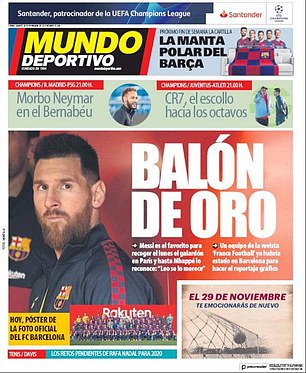 At the start of this season he took the microphone once more at the traditional Gamper Trophy friendly and told a packed Nou Camp: ‘What I said last year, I say the same again.’

It’s the one they want more than anything. But at no time so far this season – despite the fact that they top their group and lead La Liga – have they looked like a team destined to rule in Europe.

At the weekend they were almost defeated on the road by La Liga’s bottom club Leganes, who took an early lead when Ousmane Dembele lost possession high up the pitch, Samuel Umtiti’s reckless attempt to win it back failed, and Gerard Pique reminded everyone he is not the same peerless defender from those great Champions League successes by being unable to salvage the situation.

Barcelona came back from a goal behind but both their goals came from set-pieces. The first a floated free-kick from Messi nodded in by Luis Suarez, and the second Arturo Vidal turning the ball in from close range. He was a metre offside and the goal would not have counted if the ball had not ricocheted to him off the foot of a Leganes defender. 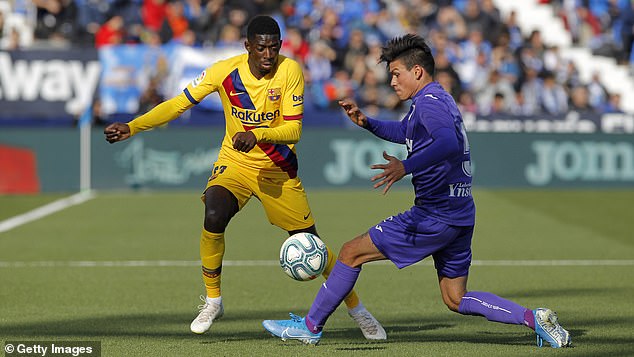 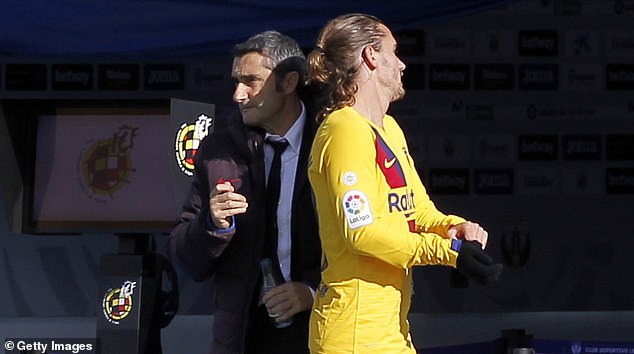 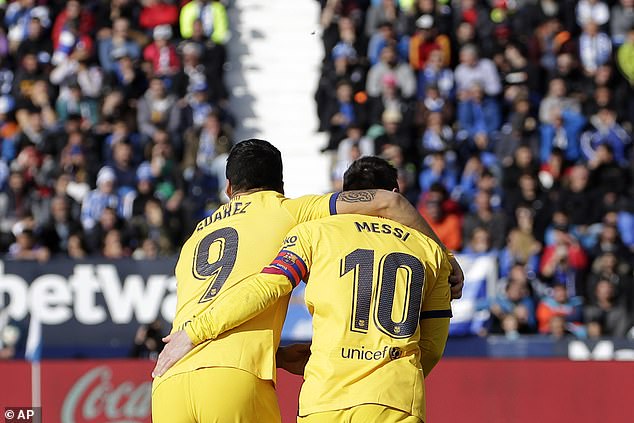 There is no shame in scoring from set-plays but it is striking that six of Barcelona’s last seven goals have come from deadball situations. There is no longer the speed and fluidity of passes and movement from them.

They rely increasingly on Messi and Suarez conjuring something between them. And Ernesto Valverde – going into December – does not know his best formation, much less his best team.

At the weekend he picked a 4-2-3-1 in an attempt to get his four forwards Messi, Suarez, Antoine Griezmann and Dembele in the same team. He really shouldn’t have bothered. Dembele, who has stood still in terms of his football education since signing at the start of last season, was as inconsistent as ever, and the hardworking Griezmann was again forlorn and frustrated when he was taken off in the second half.

Suarez has told Griezmann: ‘At Barcelona you need time and patience to get used to the very particular style’. That may well be true but there are doubts about to what extent this Barcelona has a particular style.

Players have stood up and questioned the criticism they have received so far this season, pointing to the fact that they are leading at the moment both at home and in Europe. 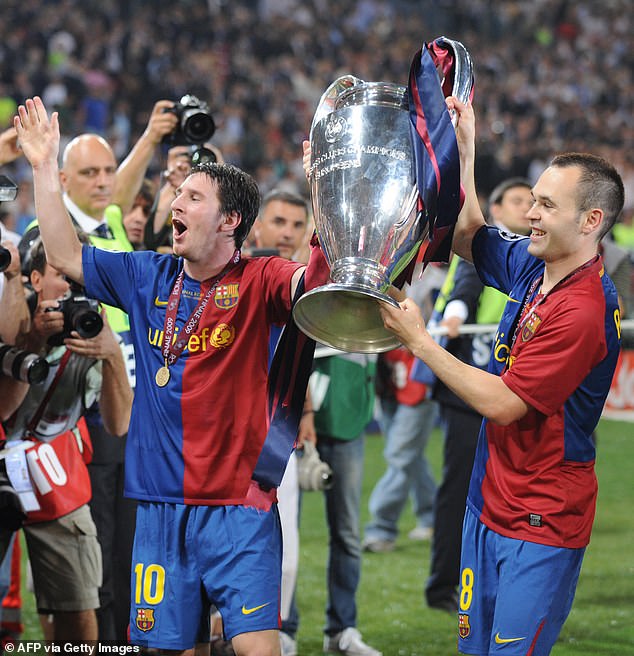 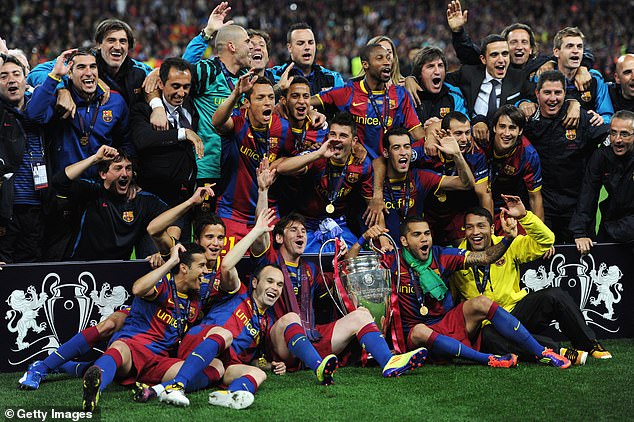 Two years later, Messi had won it again with a win over Manchester United at Wembley 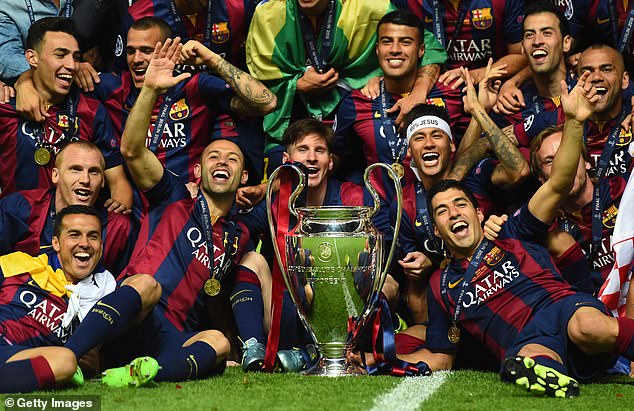 If that still stands in three weeks. The next 21 days will be the real test. On Wednesday they face Borussia Dortmund in the Champions League without three of the first-choice back four – Pique, Jordi Alba and Nelson Semedo.

If Barcelona win then they go through. But Dortmund come into the game with exactly the same incentive and if Barcelona slip up then a last match away to Antonio Conte’s Inter would be a difficult one to have to win especially with their record on the road in the Champions League in recent history.

In the league they go to the Metropolitano on Sunday hoping to avoid what would be a fourth away defeat of the season against Atletico Madrid. There will be no Sergio Busquets in midfield after he picked up a suspension at the weekend. Then on December 18 comes the home Clasico with Real Madrid looking in far better form. 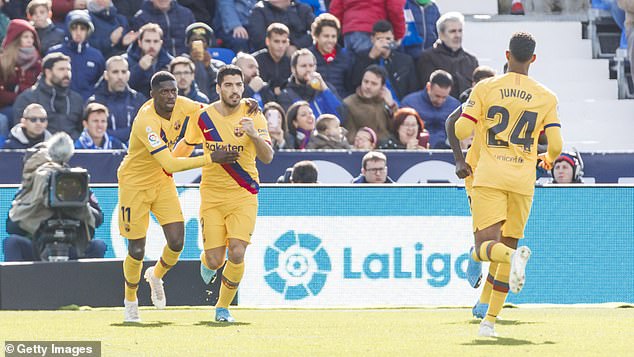 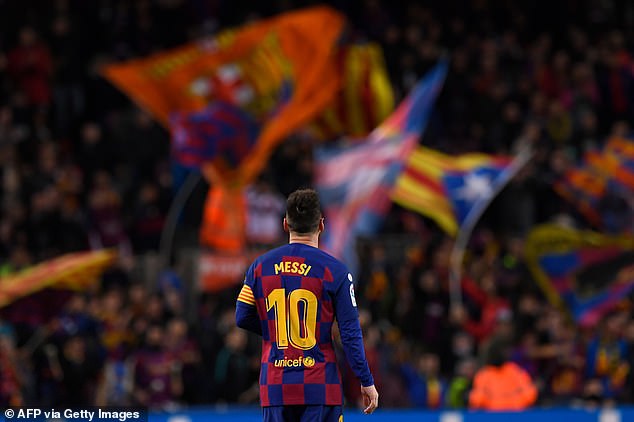 First, Messi’s bid for Champions League No 4 continues against Borussia Dortmund this week

Come out of those four games with four wins and the whispers of Ernesto Valverde having lost his way will be silenced.

Any slip-ups and there the doubts over their ability to come good next May in Istanbul will remain.

It’s clear how much the Champions League means to the club and to Messi, who is now not too far away from retiring having only won it three times (he doesn’t count Paris 2006). That would be a short return for the world’s greatest, due to be crowned again next week by France Football as the finest player on earth.

Transfer News: Arsenal ‘haven’t made a bid anywhere near’ valuation of...