On the field, the gap was two goals. In the table, it is nine points. And Liverpool are worth it. All of it. The goals, the points, the incredible distance they have placed between themselves and last season’s champions in the briefest of interludes. They are worth every last inch of their stride to the summit.

City did not summer well. They did not repair and replace at the back and, today, it showed. Jurgen Klopp has been building this team for several years. Today that showed, too. City could find no way through Liverpool’s back line until it was too late – by contrast every Liverpool foray appeared capable of delivering results.

The statistics suggest a closer game than this was, Liverpool ahead early and convincingly clear within the hour. Plus, when one team always looked like scoring and the other has a blanket thrown over it for roughly 80 minutes, the outcome is fairly predictable. From the sixth minute onwards, this was Liverpool’s victory. 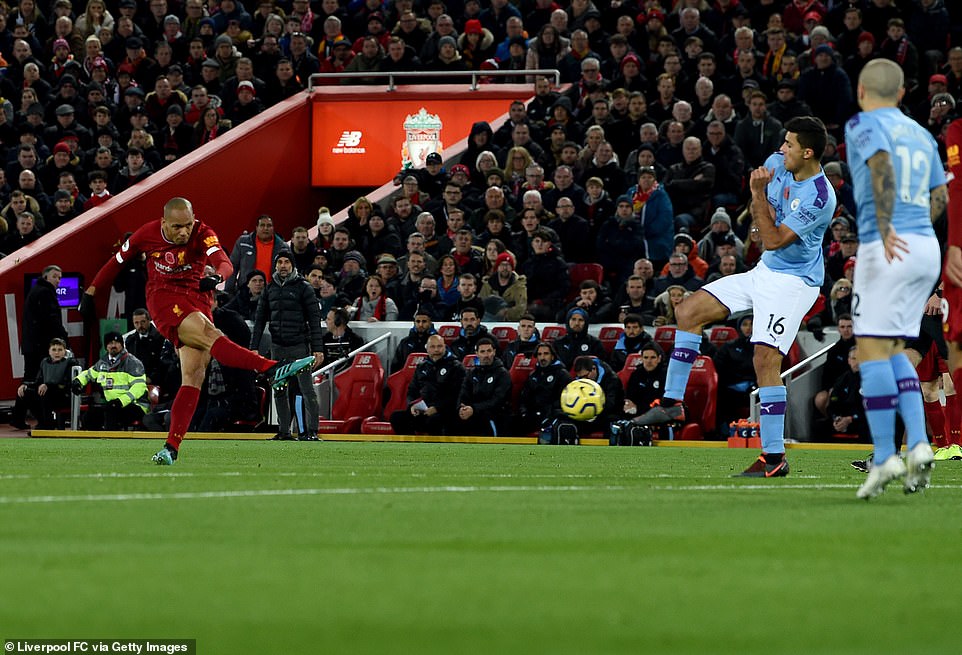 Fabinho’s right-footed strike was an absolute firecracker, whizzing past the Man City defenders into the right-hand corner 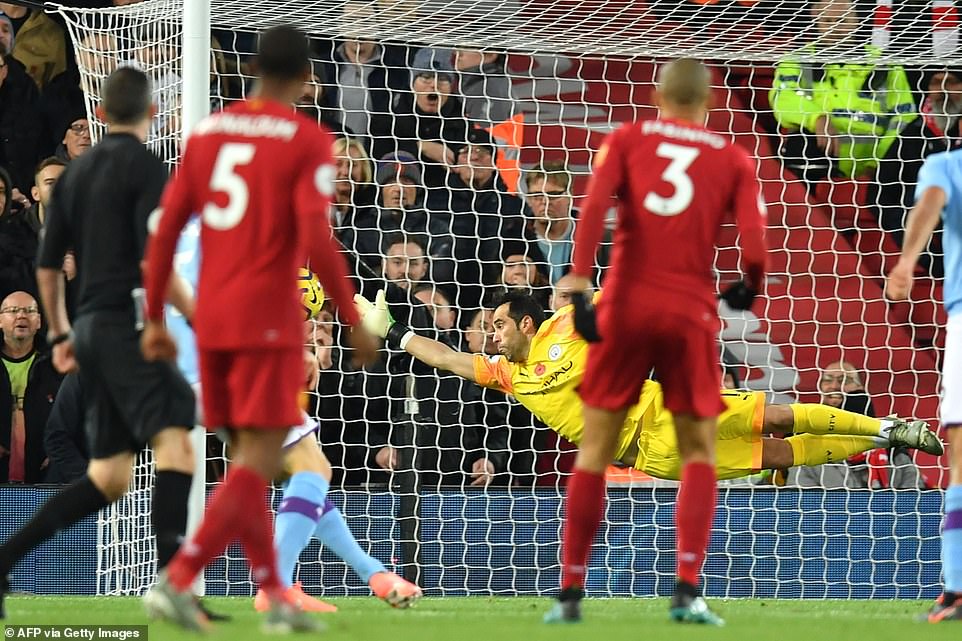 The power and accuracy of the strike beat Manchester City’s starting goalkeeper Claudio Bravo, in for the injured Ederson 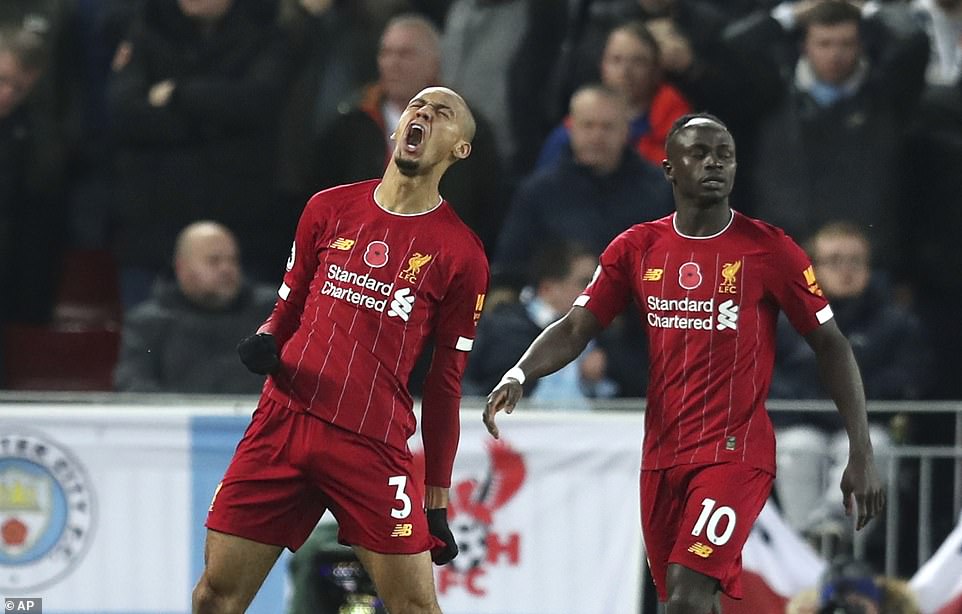 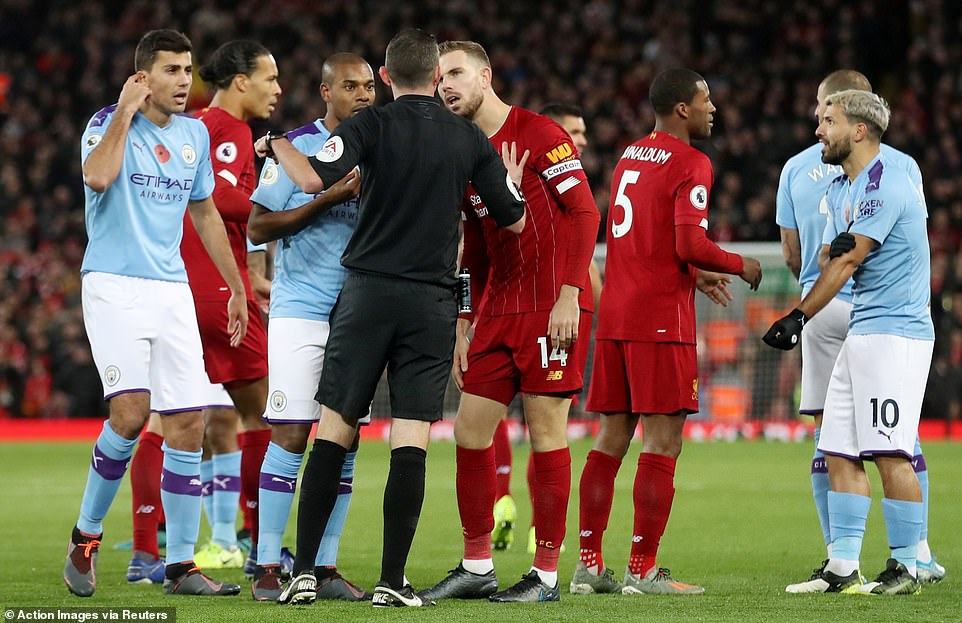 A VAR review followed, as the ball appeared to hit Trent Alexander-Arnold’s hand in the Liverpool penalty area beforehand 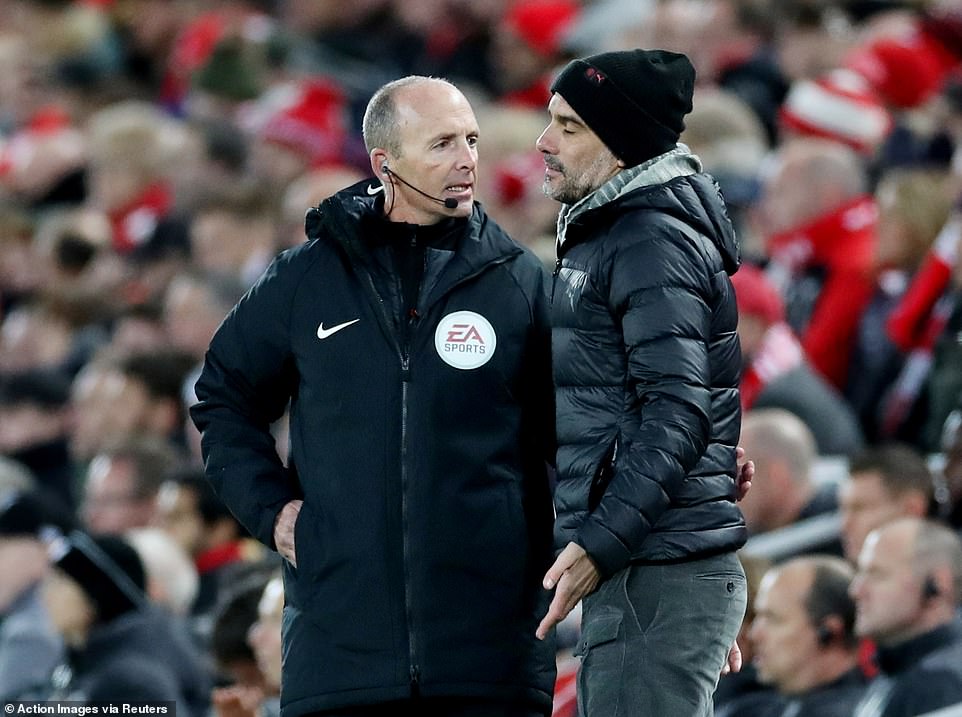 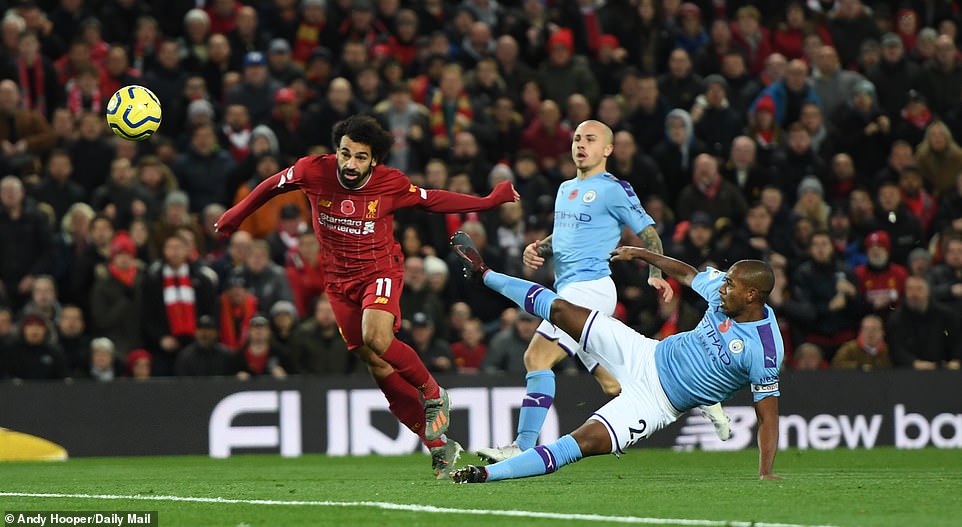 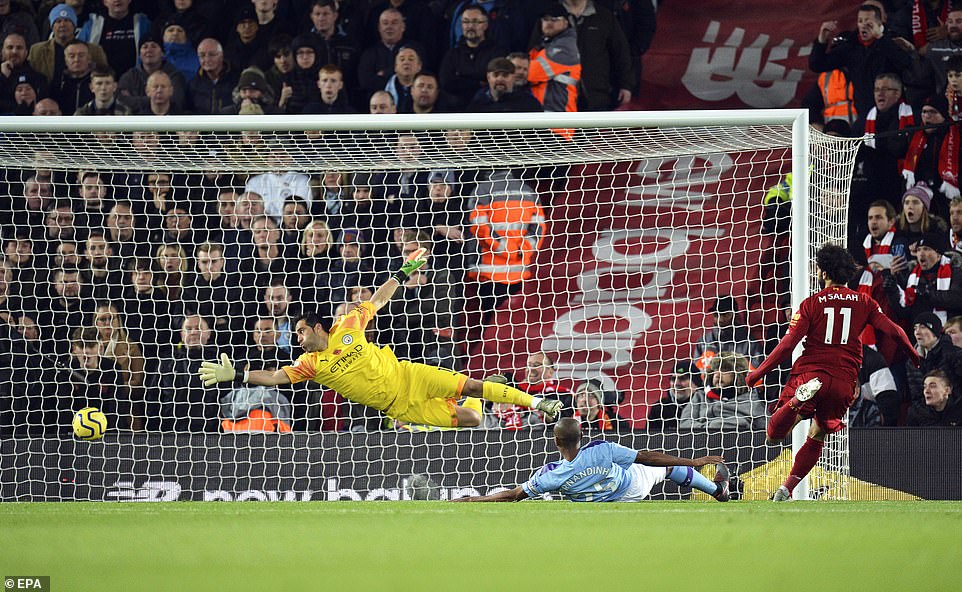 Salah’s run beyond the City defence and header into the corner was to perfection, and gave City a mountain to climb early on 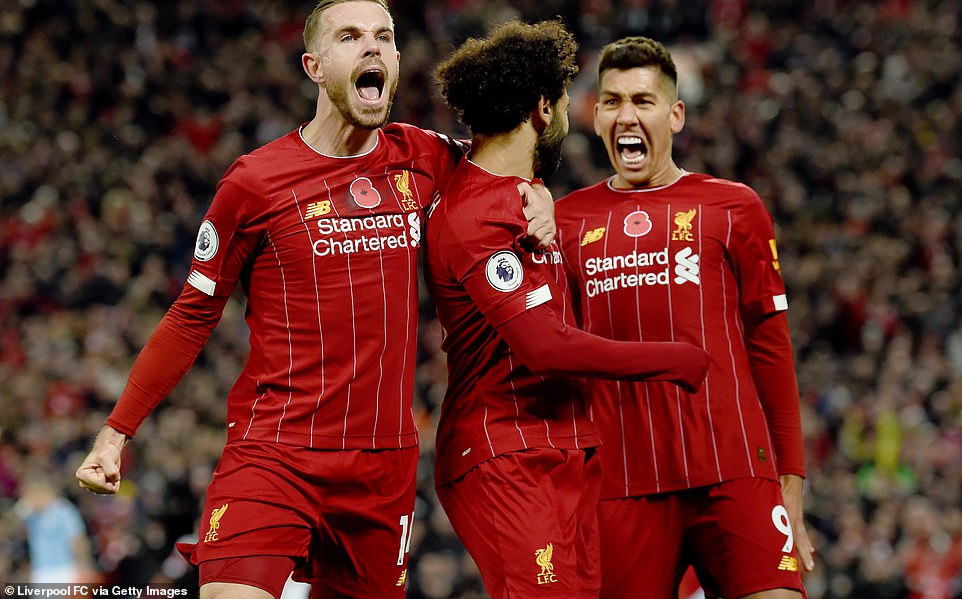 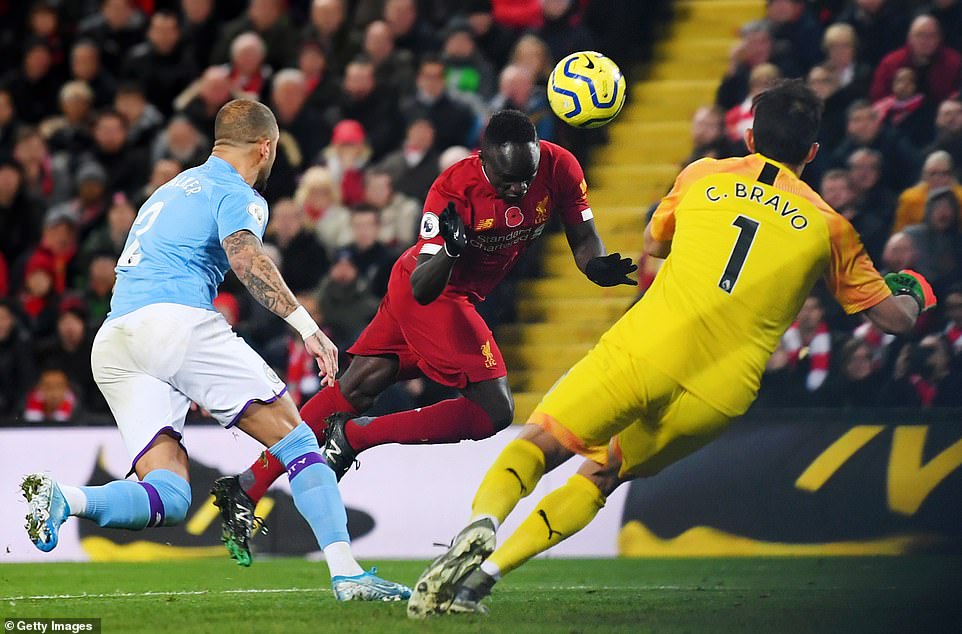 Mane heads in at the back post from Jordan Henderson’s delicious cross, with keeper Bravo unable to claw the ball out

Sometimes a team gets into such a good place it is almost as if they forget how to lose. That is where Liverpool seem to be right now. It is more than the old cliché about winning without playing well. It is making the absolute most of opportunity, about riding a little luck, about summoning the resilience to see out a storm.

Liverpool did all three in the first-half here. It wasn’t that they outplayed Manchester City. The champions did rather well in open play. Yet while City found themselves thwarted and smothered, so Liverpool’s counter-attacks were little moments of perfection. When they got a chance, they took it. When they got a sniff, they took that, too.

It was an even game, yet Liverpool went in at half-time two goals clear, and it is hard to say they didn’t deserve it. There is something hugely impressive about this team and the way Jurgen Klopp has them playing. 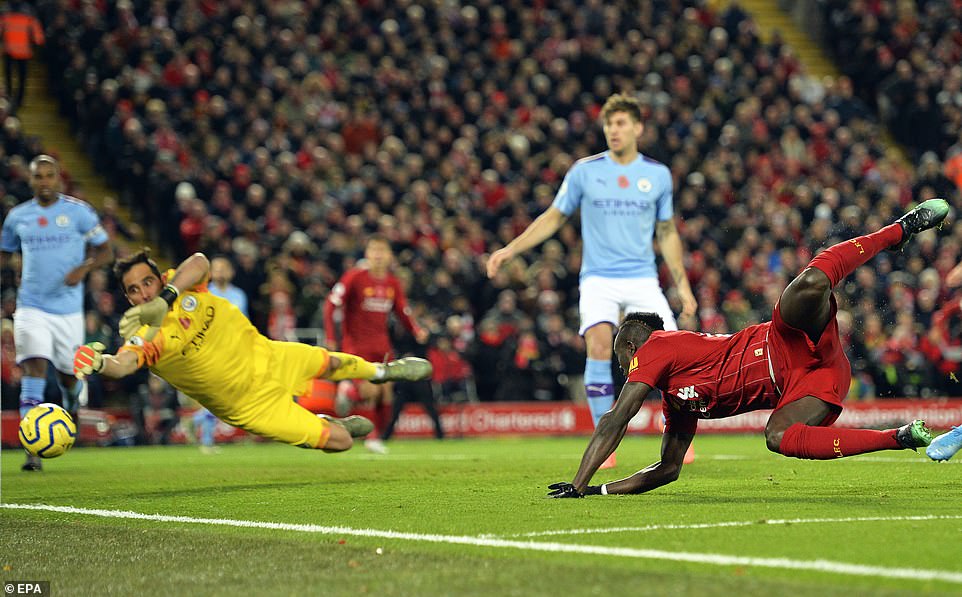 City’s number two keeper Bravo managed to get a hand to Mane’s header, but could only divert it into the goal’s side-netting 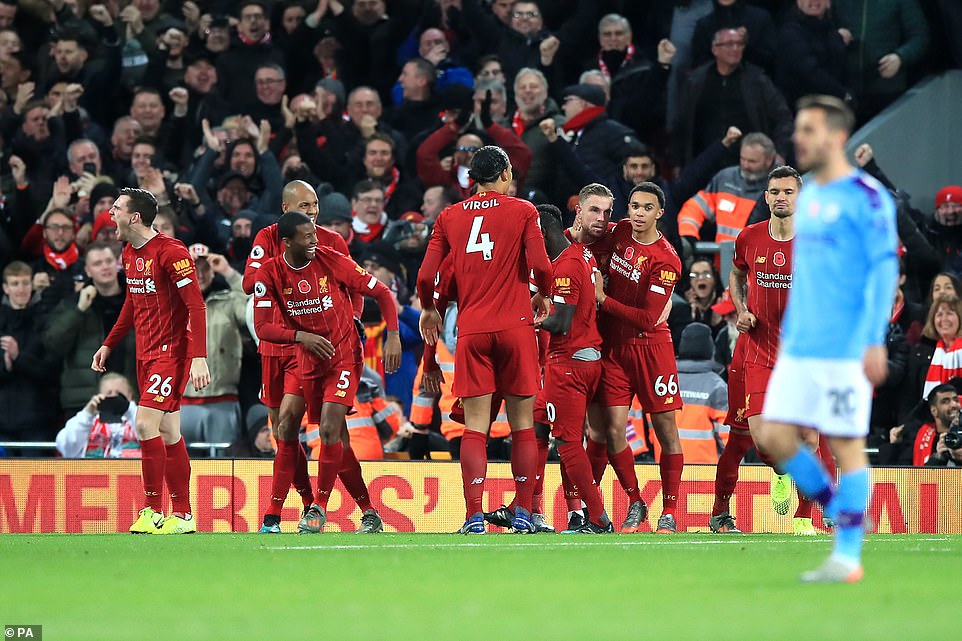 Liverpool’s team celebrates their third goal of the evening, amid a rapturous and jubilant Anfield crowd on Sunday evening 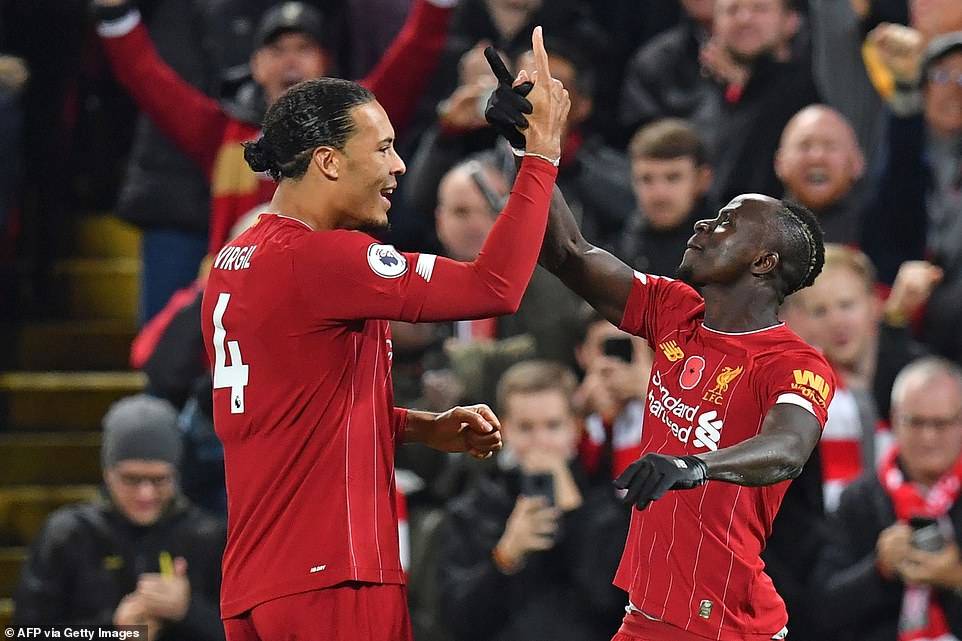 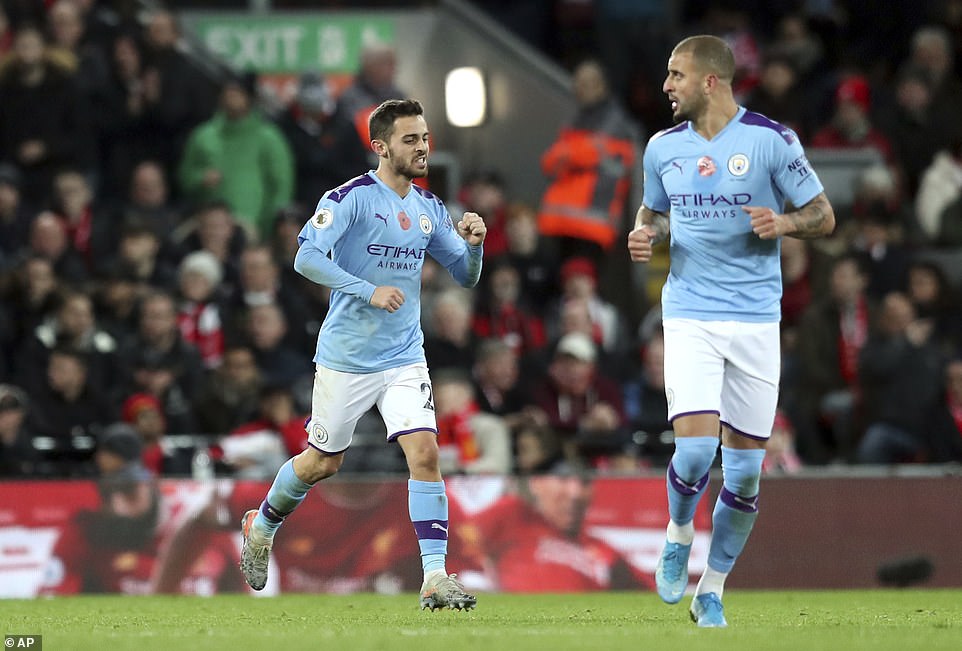 Man City’s Bernardo Silva fist-pumps after he pulls one back for the champions, but it was too little too late for the away side

They know exactly what they are about in a way City do not right now. Yes, this has much to do with injuries and a makeshift defence. Yet whose fault is that?

It is not just that Liverpool look outstandingly coached, they have been outstandingly prepared for this moment, the balance of the team, the recruitment, spot on.

Even so, it still required one of those sliding doors VAR situations to give Liverpool the advantage. What might have been a penalty at one end turned into a goal at the other. On another day, that might not be the case. Thank heavens that with VAR there are no more random, subjective calls and grey areas. 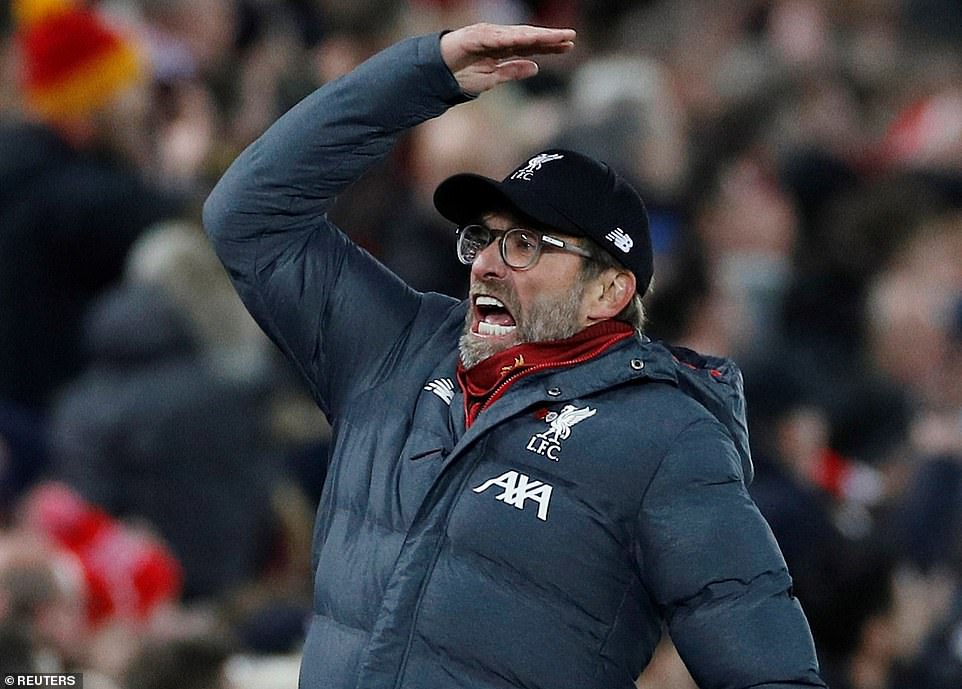 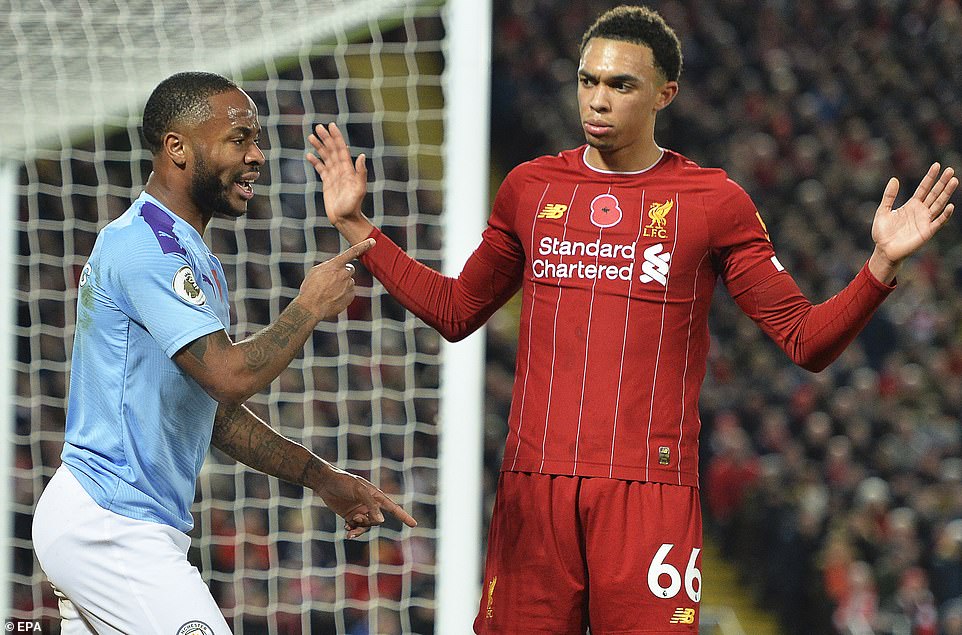 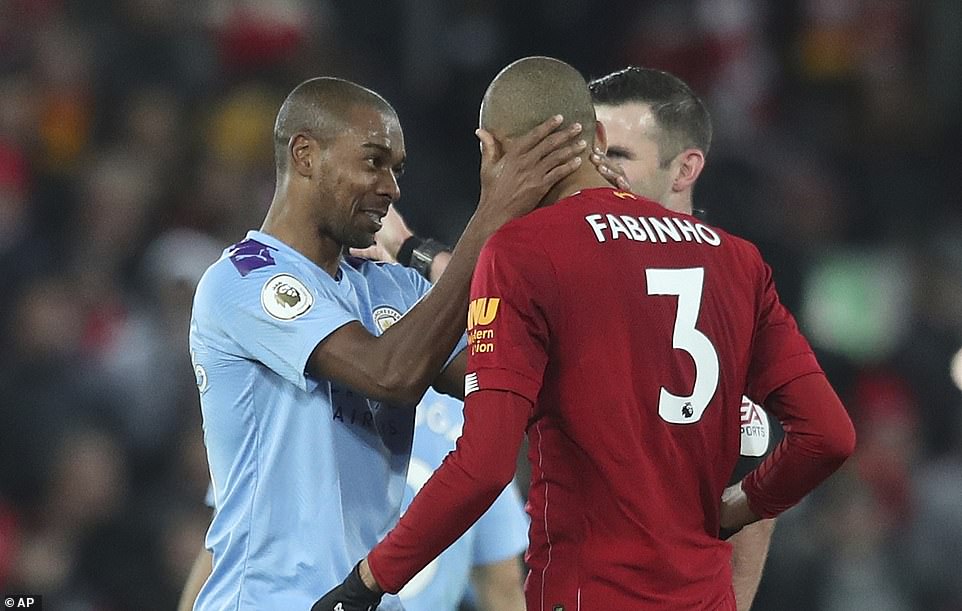 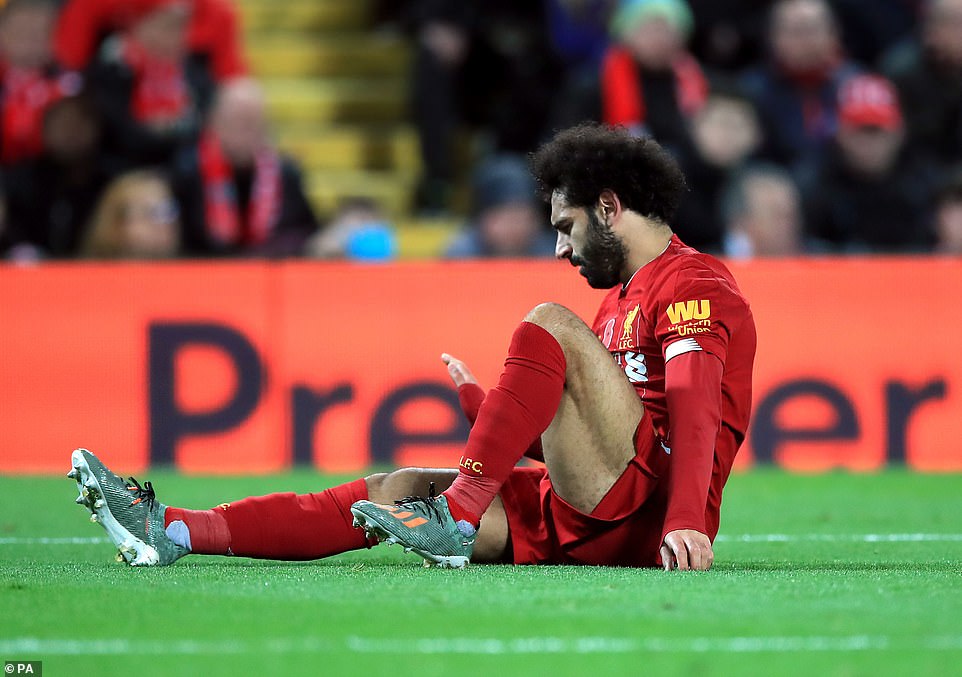 There was cause for concern later in the first period when Salah went down with a knock, but he recovered and continued

You know when trains get cancelled because it’s the wrong kind of snow? Well, handball is a little like that now. This was the wrong kind of handball. So referee Michael Oliver waved it away and so, metaphorically, did the little man in front of a television screen somewhere near Heathrow. And Liverpool tore up the other end and scored 22 seconds later.

VAR cannot be blamed for that obviously. It cannot be blamed for Ilkay Gundogan’s poor clearance, or not replacing Vincent Kompany and keeping Claudio Bravo as number two goalkeeper, or any of the other minor judgement calls that will have been some factor in conceding here. Gundogan cleared weakly to Fabinho and his shot from 25 yards flew past Bravo, the 22nd goal he has conceded from 41 shots. Having dominated to that point it was the most dispiriting start for City.

Worse followed. There were 13 minutes gone when Liverpool went two clear – although this was the encapsulation of all that is great about this team. The initiative, the counter-attacking pace, the precision, the finishing, it was all there. Alexander-Arnold brought the ball out from the right and hit a stunning crossfield pass to Andrew Robertson on the left. His ball into the centre was equally precise and met by Mohamed Salah at the far post, his stooping header leaving Bravo powerless. 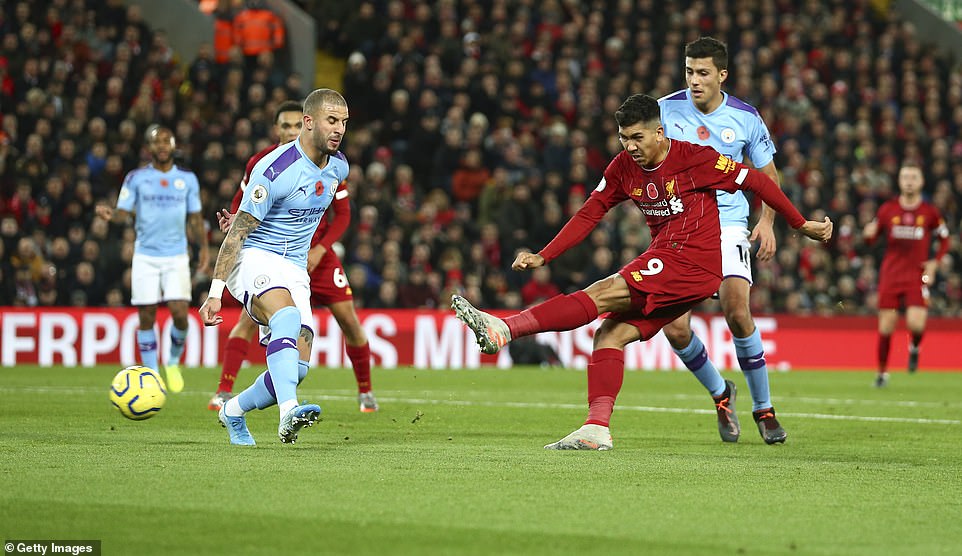 Roberto Firmino’s shoots with his left foot in the first-half, as City defender Kyle Walker attempts to block the forward’s shot 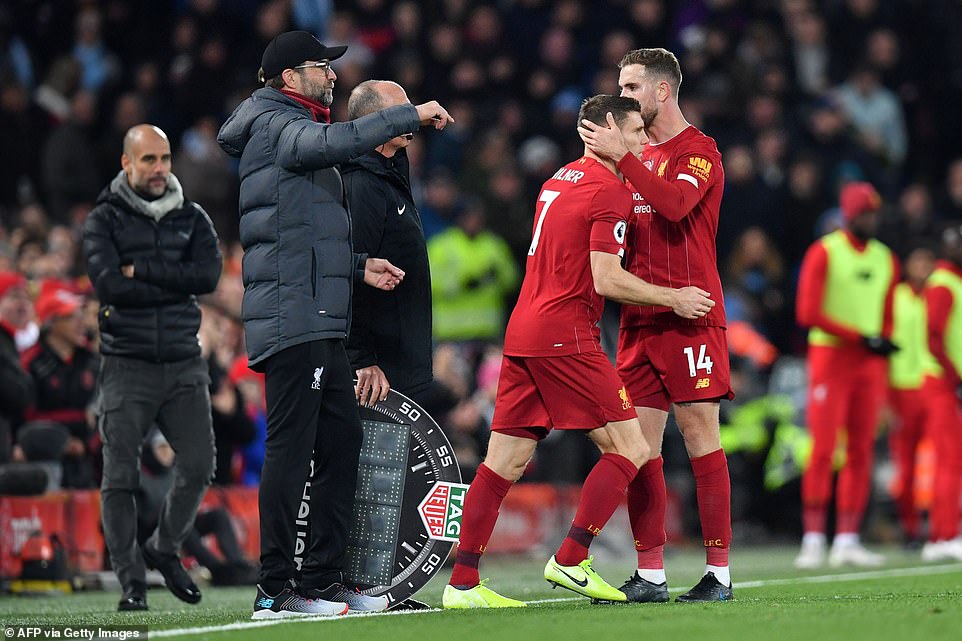 Henderson was substituted in the second-half, and he handed over the captain’s armband to his replacement, James Milner

City were stunned and it took them some time to recover. Not until the 29th minute when Angelino played a lovely one-two with Kevin De Bruyne and skimmed the outside of the far post did they truly threaten Liverpool’s goal.

In the 42nd minute, De Bruyne found Sergio Aguero who could have done better one on one, but steered his shot wide. Perhaps had City scored either of those chances it might have been a different outcome. Instead, first blood after half-time went to Liverpool, and that was City done.

It was another cross from wide that did it, but not from one of the usual aspects. Alexander-Arnold and Robertson may have more assists in a year than any full-backs in the modern era, but this was a beauty from Jordan Henderson. He skinned Gundogan and picked out Sadio Mane at the far post. Should Bravo have done better preventing the ball reaching its target? Yes. Was he the reason City lost? As Pep Guardiola predicted, no. He just didn’t do anything to stop it happening.

Mane scored with his header and Anfield began to really enjoy the afternoon. Not even a goal from Bernardo Silva with 11 minutes remaining could dampen that spirit. Time was, Anfield would have got nervy at the thought of a comeback. Not anymore. They didn’t even flinch when Alexander-Arnold got away with a second one, a handball from a Raheem Sterling cross that infuriated Guardiola but was, again, waved away. 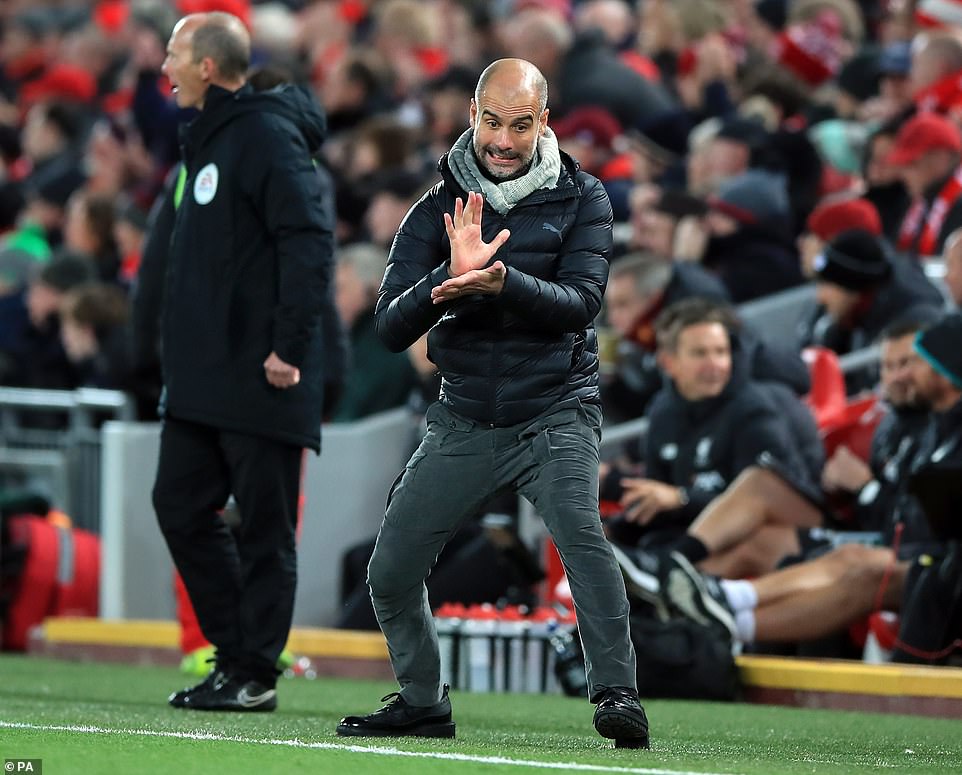 City boss Guardiola was visibly agitated on the sideline throughout Sunday’s match, as his side lost ground in the title race 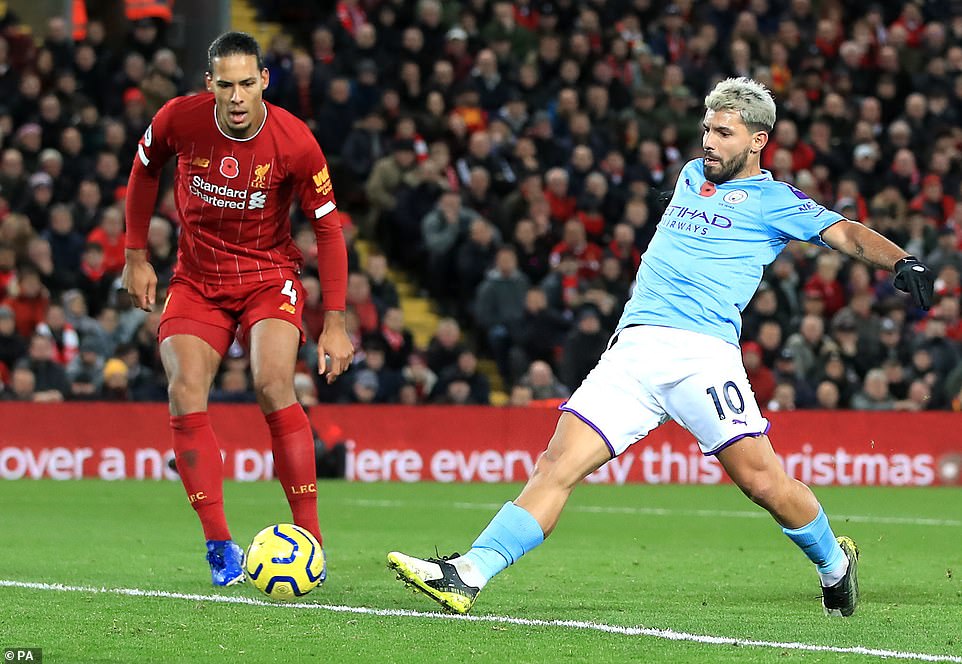 Sergio Aguero somehow didn’t connect with a Kevin De Bruyne cross, and the Argentinean is still yet to score at Anfield

One little vignette summed up the distance between these teams right now. Midway through the first half, Bravo kicked a pass straight into touch. Guardiola applauded hands over his head, vigorously, as one might to stop a kid feeling downhearted after a mistake on Sunday morning.

A minute later, Alisson Becker played a quite lovely pass – to the same area across the same distance – which picked out Alexander-Arnold who went on a surging run of 50 yards or so, into the heart of City’s defence, finding Robert Firmino, who forced a save.

It is a matter of months since Liverpool could not catch City, no matter how hard they tried, but right now it’s men against boys.