Aberdeen striker James Wilson wondered whether he had a future in football after finding himself without a contract for the first time in his career last summer.

The former Manchester United starlet, who had been tipped for greatness by ex-Red Devils boss Louis van Gaal and club legend Ryan Giggs, scored four goals in an at-times frustrating loan spell at Pittodrie last season while his lucrative Old Trafford contract ran to its conclusion.

Knowing he would have to leave his boyhood club once his deal had expired and facing a summer of uncertainty, Wilson admits he momentarily considered options outside of the sport altogether. 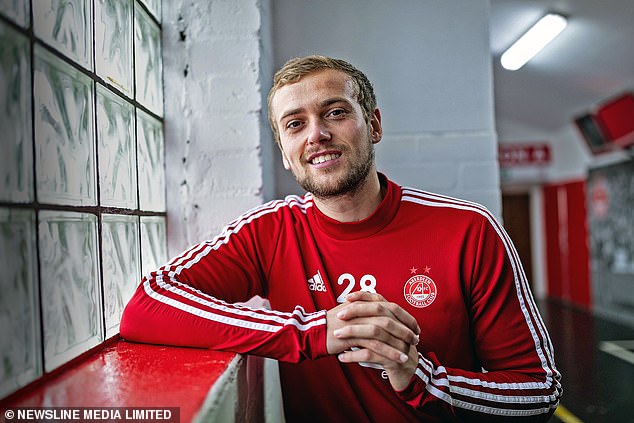 Having endured frustrating loan spells in the English Championship with Brighton, Derby and Sheffield United prior to joining Derek McInnes at the Dons, there was no guarantee he would be able to continue his career at the level to which he had become accustomed.

However, despite failing to hit the heights expected of him at Aberdeen, Wilson was offered a two-year deal by McInnes and wasted no time in accepting the offer.

Asked why his career at Old Trafford didn’t pan out as many had expected, the 23-year-old said: ‘I’m not sure. I came in every day trying my best but sometimes it just doesn’t work out. That’s football.

‘It’s a tough game and a tough industry. I think for me it was about taking it as well as possible. If this isn’t going to happen, what else can I do? 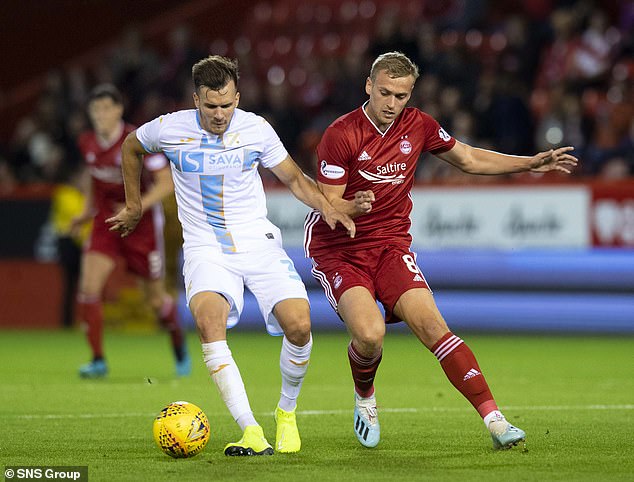 ‘Is there something to fall back on? Whether that be inside of football or outside of football. I have thought of things that I can do after my career has finished as well.

‘I thought doing that was good for me, especially not being under contract for the first time.

‘I think it was a bit of a turning point. I could have packed it in if I wanted to, but I don’t want to because I love the game. I could easily have gone into something else, but that is not what I wanted to do at this point.

‘It was never in the back of my mind — well, it must have been because I’m telling you that now, but it wasn’t something I considered.’

Struggling to fulfil the heights expected of him from respected figures in the footballing world added a further degree of pressure. 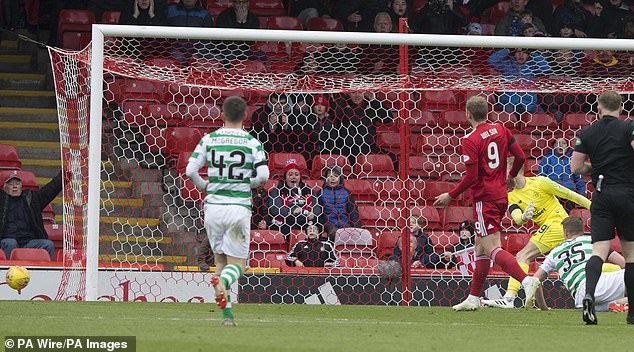 Giggs had labelled Wilson ‘a natural goalscorer’ after handing him his first-team debut at home to Hull in May 2014, while Van Gaal had described him as ‘one of the brightest young English prospects’ when the striker signed a four-year deal in September 2015.

Wilson added: ‘I do put myself under a lot of pressure, so if people do say ‘he’s going to be this or going to be that’, then that does sort of come into my head a bit.

‘If it doesn’t work out, it does get a bit frustrating but I’m here for a reason and I’m here to work hard and give it my best.’

At Aberdeen, Wilson is starting to enjoy football once again after falling out of love with the game following a turbulent period filled with injuries and a lack of goals.

It was the main reason he decided to prolong his stay at Pittodrie.

‘I enjoyed my season so much here last year despite not playing as much as I wanted to, being around people that I knew as well, so I think it was about finding the happiness of football again which was a big thing for me,’ admitted Wilson, who will return for Saturday’s trip to Motherwell after missing the 1-1 draw with Hibs and 5-0 thrashing by Rangers through injury. 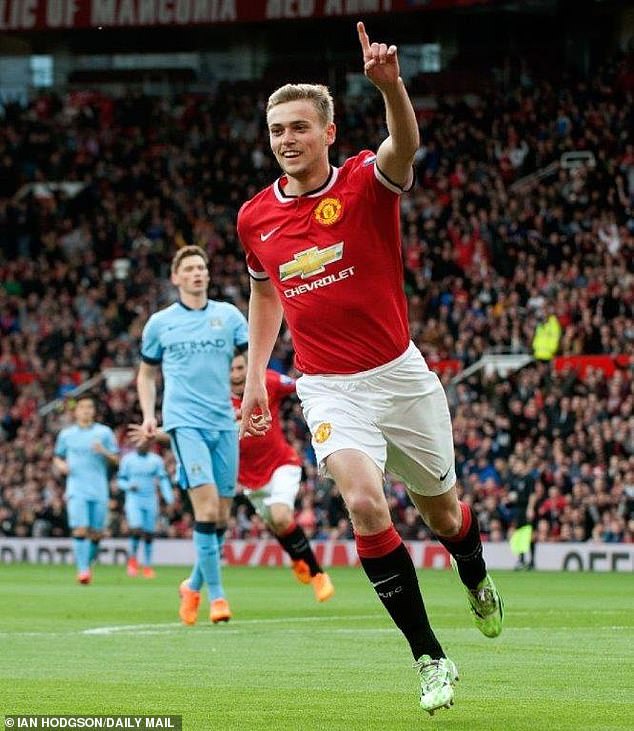 ‘There were other clubs in the Championship interested and even in America I’ve heard as well, so I think even though I had offers, it was important for me to get back to enjoying playing football again.

‘I had a bad ACL (knee) injury and then went to Sheffield United for six months which didn’t turn out as well as I’d hoped, so I think I lost a bit of confidence, which is nothing against Sheffield United.

‘It was a brilliant club to be at, but I think just coming here (Aberdeen), building my confidence back up again, I enjoyed the process of that and got my confidence back. I think it showed towards the end of last season where I managed to start a few games and get a goal or two.’

Wilson’s apparent loss of confidence in recent years is surprising given that he once trained with the first team at United under Van Gaal and worked alongside the club’s elite strikers on a regular basis.

‘There were four of us when we were training,’ he recalled. ‘It was (Wayne) Rooney, (Robin) Van Persie and (Radamel) Falcao at the time. I think just seeing them in training was enough, just to see what they do on the pitch. It’s amazing the amount of things you can pick up from them when they don’t seem like they’re doing anything.

‘If you watch even the body language, you can tell that they’re going to do something. Just seeing them around the building, on the training pitch in the year or two that I got under Van Gaal, it was a big thing for me.’

Wilson certainly isn’t ready to give up on his dream of being a Premier League striker just yet.

He has one eye on securing a regular place in the Aberdeen side but another on the long-term goal of getting back to the English top flight.

‘I’d like to think I’ve not hit my peak yet, so I’m working towards that (getting back to the Premier League),’ he added.

‘That’s just the way football goes but I’m certainly going to do everything I can within my power to make it happen.’

‘He is a player I like’: Ole Gunnar Solskjaer confirms interest...