‘You could see he was gushing with blood’: Steven Gerrard left furious as Livingston’s challenges result in Joe Aribo leaving field with 20 STITCHES

By Mark Wilson For The Scottish Daily Mail

The Ibrox side booked a Betfred Cup semi-final against Hearts in early November thanks to Glen Kamara’s early goal at the Tony Macaroni Arena.

But a tousy quarter-final was pockmarked with controversy, Holt believing Rangers got lucky when Filip Helander avoided a red card for a last-man challenge on Lyndon Dykes in the first half. 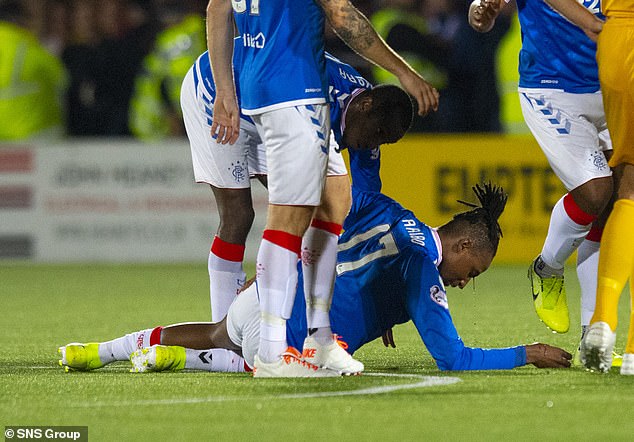 Gerrard, however, believes the home side had no room for complaint on that front given their physical approach to the match. While refusing to castigate Ricki Lamie, the Ibrox boss believes the Livingston defender should have been dismissed by referee Don Robertson for an elbow on Aribo that forced his substitution after just 22 minutes.

‘It’s interesting him saying that we got away with one,’ said Gerrard (right). ‘Don’t take me there – don’t take me there.’ Pressed for his thoughts, Gerrard added: ‘There were a few head knocks – and a couple the last time we played this team as well.

‘Is it skirting close to dangerous play? You are the people who have to write about that and have an opinion on that. A boy has just gone off with 20 stitches in his head.

‘Now, I have watched Lamie long enough to know he is not that type of player. I’m not accusing him of anything out of order.

‘But that is serious foul play because he has led with the elbow and Joe has been caught. Unfortunately he will be missing for a short while with 20 stitches in his forehead but it is what it is.’ Aribo will miss Saturday’s Premiership meeting with Aberdeen after the clash.

‘You could see he was gushing with blood but the doctor did a fantastic job,’ added Gerrard. 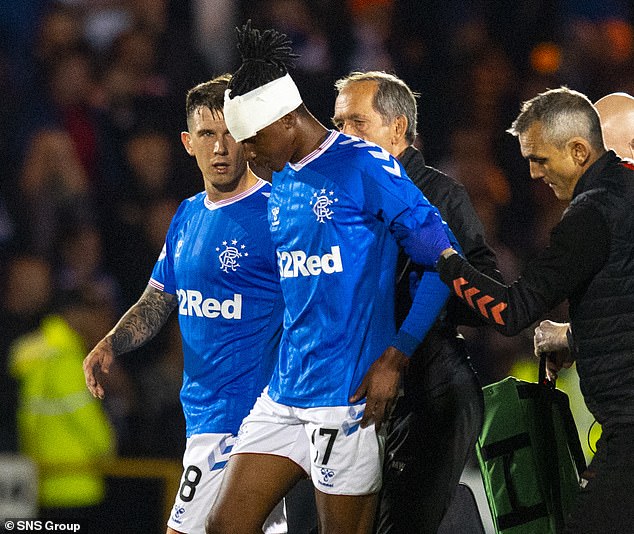 ‘He’s bandaged up and he went straight home, so we will see how he is. But he will certainly be out for the weekend.’ Helander escaped any sanction despite appearing not to get a touch on the ball as he sought to halt Dykes in first-half stoppage time.

‘It maybe could have gone the other way,’ said Gerrard. ‘I am not a biased manager.

‘It’s a 50-50 one. Some refs might think it was a coming together.’ The Rangers manager was nonetheless delighted to see his team prevail as they seek to go one better than last season’s semi-final defeat to Aberdeen in the competition.

‘It wasn’t pretty but we showed a lot of courage and desire to stand up,’ he added. ‘It wasn’t easy on the eye but it’s difficult at Livingston.

‘You are bombarded with a lot of high balls and it’s about fighting for possession.

‘It is a very tough draw. Hearts look like they have turned the corner. 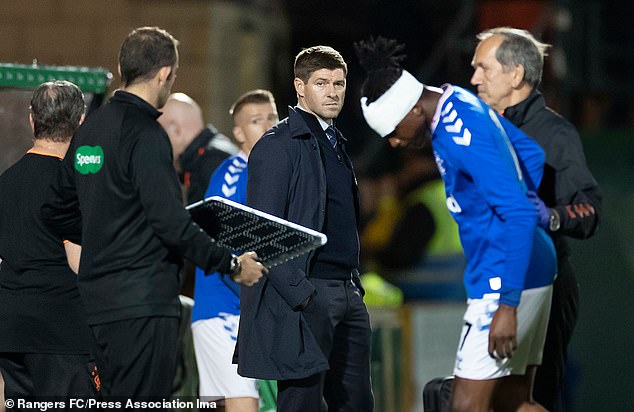 ‘But we all want to get to the League Cup final now. That’s what the supporters want and demand.’ Holt revealed that referee Robertson had apologised to the Livingston players for not dismissing Helander late in the first half.

Asked if the Ibrox side had got away with one in that incident, Holt said: ‘Yeah. It didn’t help us but I don’t think it cost us the game. We still created enough chances.

‘You do want the fine lines and wee breaks to go your way against the bigger teams. It didn’t go our way but it is one of those things.

‘I think the referee said he had a look and said it was a red card after the game.

‘But attacking and defending, we need to be better.

‘We need to get in and score those chances we are creating. You put in all that effort but, at the end of the day, we are out of the cup.’