Tyson Fury went to hell and back again. This time physically through a curtain of blood in Sin City, not from the depths of mental illness back home.

Two gaping cuts at Fury’s right eye threatened to rob him of his lineal world heavyweight title and of the multi-millions awaiting him in that mega-rematch with WBC champion Deontay Wilder.

Those mighty incentives kept him going all the way from the third round as the blood poured from cuts above the right eye and in that eyelid, the first inflicted by a punch but the second by a clash of heads with Sweden’s unexpectedly skilled and demonstrably valiant Otto Wallin. 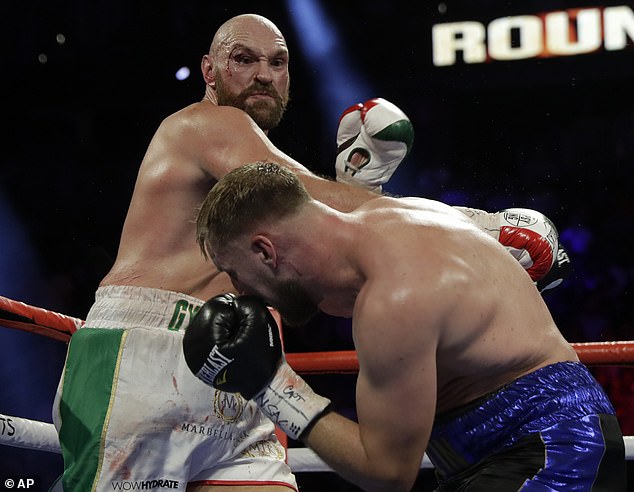 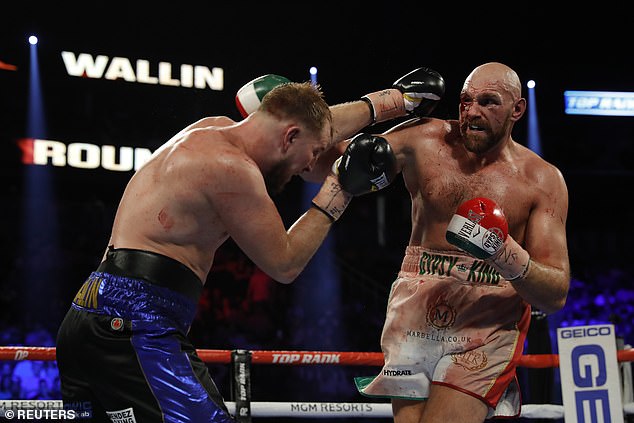 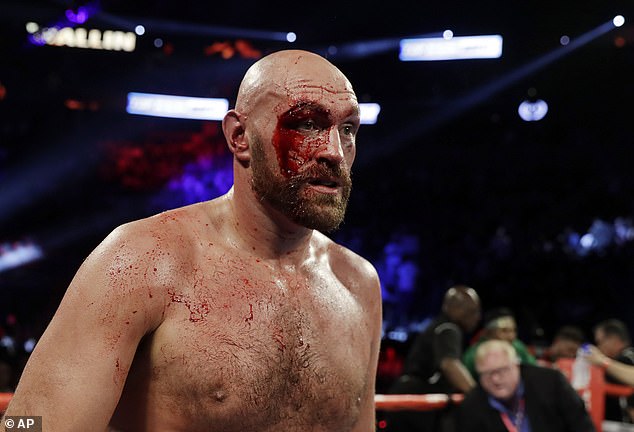 The Gypsy King had to plumb his own depths of his courage to stave off a second massive upset in a year of a champion British heavyweight, following Anthony Joshua’s crash against Andy Ruiz Jr.

The scorecards were overwhelmingly unanimous in his favour at the end but Fury fought for nine rough-house rounds on the precipice of referee Tony Weekes or the doctors calling it off.

The more the blood poured down, turning his white shorts red, the more gallantly Fury went for the finish which would take those judgements out of the hands of the officials.

But on the several occasions he had Wallin reeling, he could not find the finishing punch. 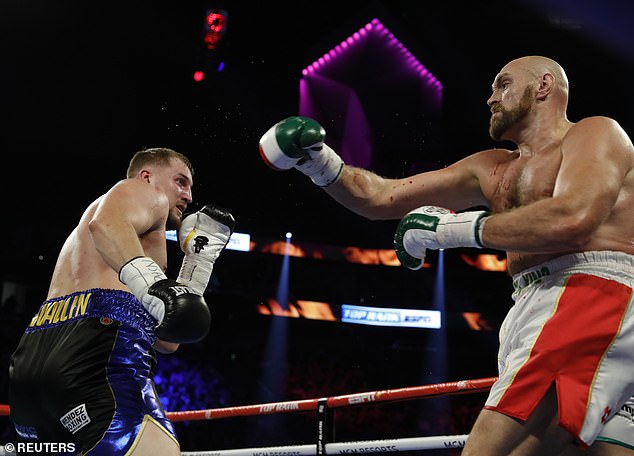 Then, at a sensational climax, it was Fury who was perilously close to being knocked out.

As they stepped back from each other the admiration was mutual, even though Fury had aimed a double-barrelled four letter insult at him earlier, when he believed the worst of the damage had been inflicted by a Swedish butt.

Wallin had come to war in memory of his recently deceased father and Fury told him: ‘You are a true Viking warrior and your father will have been proud of your performance tonight. But I also proved that I am the Gypsy Warrior.’

Wallin responded: ‘I did everything I could but Fury is a great champion.’ 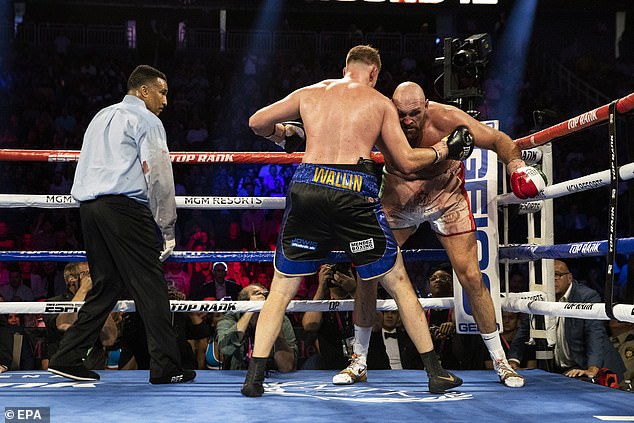 Fury then roared through his wounds: ‘Deontay Wilder, I want you next.’

The Bronze Bomber against whom he climbed off the canvas so unbelievably to retrieve a controversial draw will be less inclined to listen to that than take note of how much trouble Fury was given by the hitherto anonymous Wallin.

That fight is scheduled for Vegas on February 22.

At this one, Fury continued his love affair with the Mexican people by coming to the ring draped in their national flag and sporting a headband in those red, white and green colours beneath a huge, black sombrero, to Mariachi music and a roaring ovation. 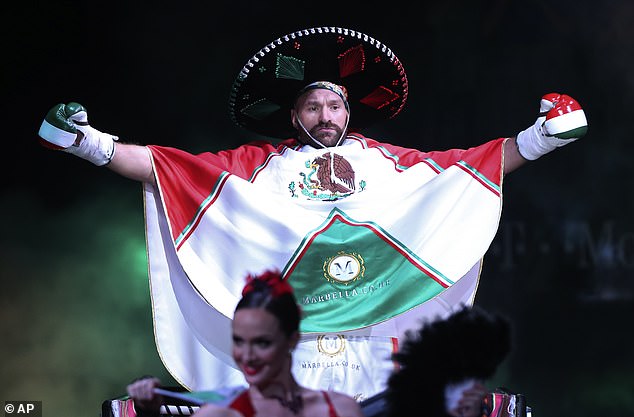 Tyson Fury entered the ring wearing a Mexican flag and a red, white and green headband

Thousands flock from south of the border to celebrate this Mexico Independence weekend in Vegas and they have taken to their hearts the Gypsy King, with his humorous attempts to speak Spanish.

The T-Mobile Arena was not as packed as it would have been for Canelo Alvarez, the seating space having been configured down to half its 19,000 capacity and not quite filled at that.

But with a majority of Mexicans in the crowd there was a fiesta atmosphere and plenty of noise. 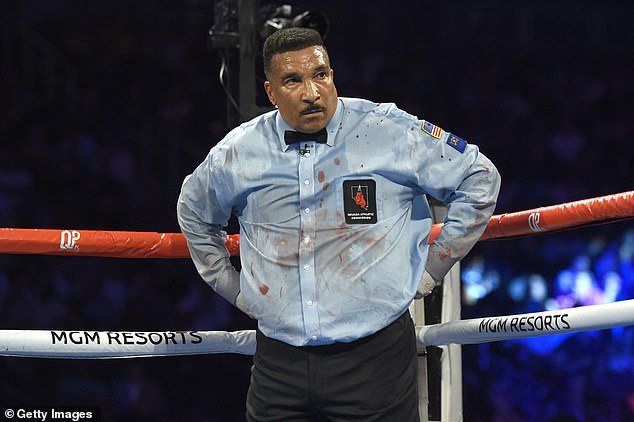 The opening exchanges were less heated than the reception. Wallin looked ready to make a fight of it landed a couple of early shots to the body but Fury’s jab dictated most of the first round.

Wallin enjoyed some success at the start of the second and Fury switched to southpaw to try to nullify the right-leading Swede. It was heating up now.

Wallin was quicker than expected and the early rounds a mite closer than anticipated and Fury sustained a cut by his right eye in the third. Fury looked angry about the injury, presumably believing it have been inflicted by a head clash, although referee Tony Weekes was said to be ruling it a punch. 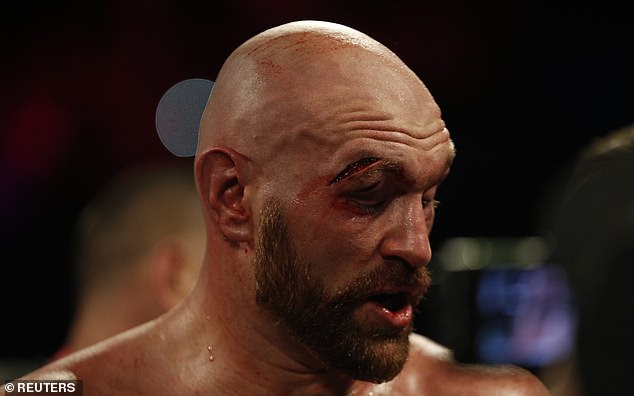 Fury was clearly bothered by the cut, flicking at it with his right glove and tried to end it with a hefty right but Walliin fired straight back.

Fury complained loudly to the referee in the fifth as Wallin bored in head first but found time to connect with a couple of juicy uppercuts…..and to scream two four-letter words at his opponent.

Wallin was already doing much better than the German Tom Schwarz who fell to Tyson in the second 11 weeks earlier.

When another cut appeared in Tyson’s right eyelid the referee paused the action to inspect the wounds, arousing fears of a stoppage.

There was another inspection midway through the sixth but again he was allowed to continue. Sensing he needed to finish it soon Fury went all out on attack and had the Swede reeling in the seventh but could not finish him off.

The start of the eighth was delayed for the removal of excess Vaseline and the blood was flowing again. 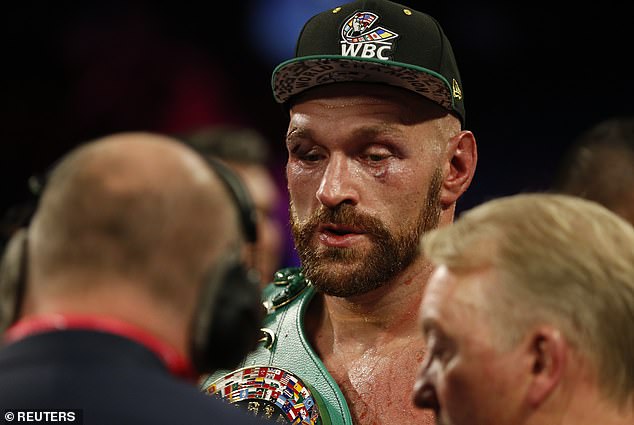 This was a rough night at the office. Fury was landing heavy shots but Wallin kept absorbing them, although barely surviving a pounding at the end of the ninth.

Fury poured on the punishment in the tenth but Weekes declined to pull Wallin out. The Swede was in even deeper trouble towards the end of the 11th but somehow survived.

In an astonishing climax, it was Fury who was virtually out on his feet in the last round but he, too, found the courage to survive.

BUMBLE AT THE TEST: It appears Tim Paine lost his cool...

Gary Cahill says Crystal Palace could have won at Arsenal if...