‘VAR check complete,’ declared the voice over the tannoy when those at Stockley Park declined to recommend Sheffield United a second-half penalty for what appeared to be a handball by James Ward-Prowse.

In the home sections of a seething Bramall Lane they may well have added their own, one-word expletive to the end of the message to turn it into a description rather than a statement. Chris Wilder included.

The Blades manager, whose side was trailing at the time to what would turn out to be Moussa Djenepo’s magnificent matchwinner, had earlier seen an Oli McBurnie tap-in which would have opened the scoring disallowed for offside following a replay before the second intervention which went against his team. 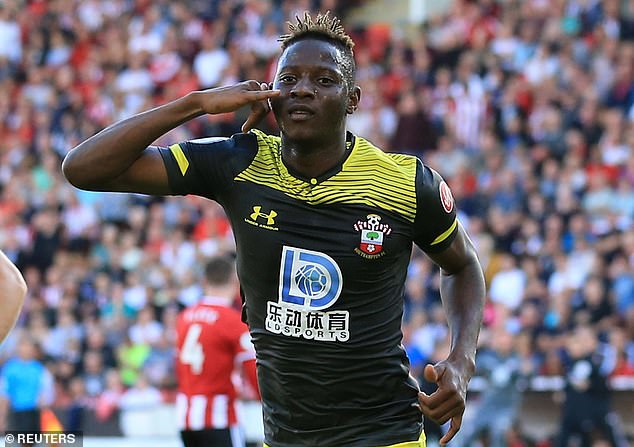 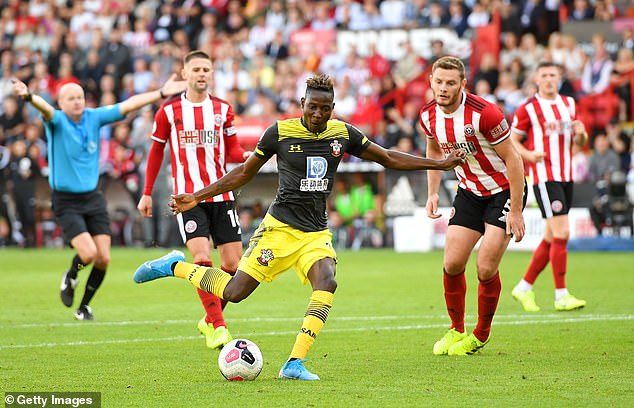 Unsurprisingly, Wilder was not impressed. ‘It’s a penalty,’ he said. ‘If you look – there’s two or three of our boys waiting to tap it in. I don’t think they can get it wrong in my opinion.’

The Blades boss believed that the Saints’ man’s arm was outstretched when contact was made and that, as a result, referee Lee Mason should have been instructed to point to the spot.

‘The hand was out there,’ he said, before taking aim at last week’s Premier League meeting at which ref’s chief Mike Riley admitted the new system had already made four errors.

‘Maybe in four weeks’ time someone will come out and say it’s a mistake,’ he said. ‘You expect with all the talk and the debate it’s a pretty easy one to pick up. I don’t know why they had that meeting then, eh?’

Understandably frustrated, he was not done there. ‘We’ll get something back during the week that will make me feel better,’ Wilder added. ‘I don’t think so.’ 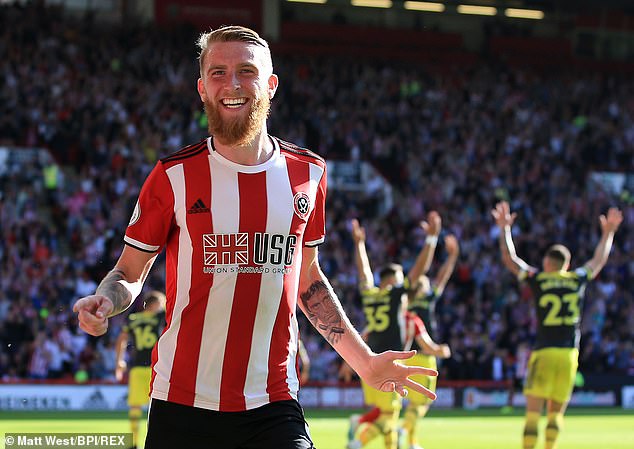 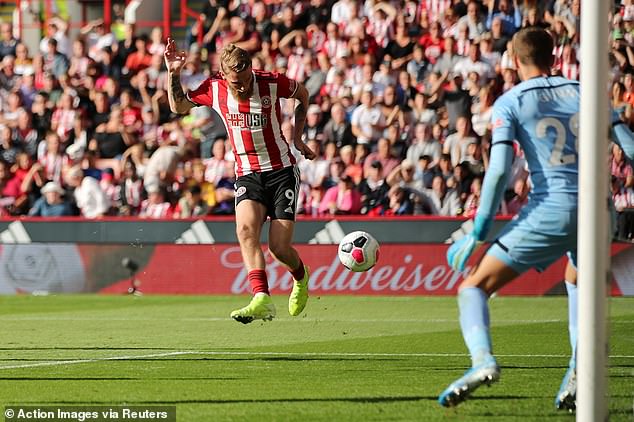 Wilder was right to be upset. VAR was meant to put an end to controversy. If anything, it has added to it. However, the handball rule and its interpretation have also played their part. Something has to be done. This cannot go on.

Despite the fury there could, however, be no complaints about the goal that settled an entertaining clash. Southampton manager Ralph Hassenhuttl had taken his men sailing in the build up to this clash and Djenepo, the Saints winger turned attacking full-back, burst past three defenders on 66 minutes like he was wearing jet skis before calmly slotting past Dean Henderson.

Hassenhuttl hailed the Mali international, a £14m summer signing from Standard Liege who already looks like a bargain. ‘I have to thank my physios that made him fit,’ the Austrian said. ‘It was very close – they did a fantastic job. When he gets the ball in these positions it’s unbelievable – they cannot catch him he’s so quick.’

The 21-year-old seized on a poor pass from Ollie Norwood but was 35 yards out when he did his thing. Djenepo has already scored a screamer at Brighton and was at it again on his first start. Two moments of magic and we are only in September. 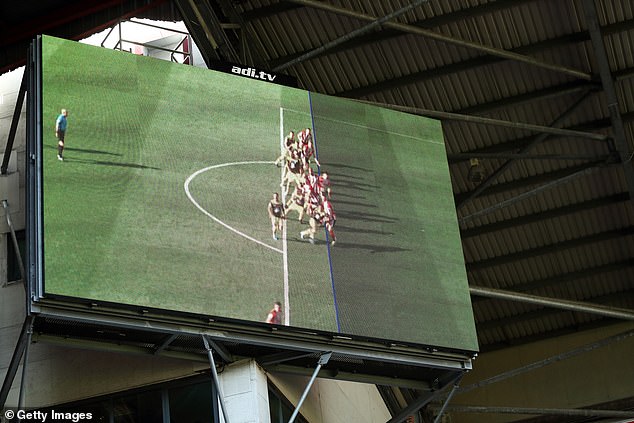 John Egan, who missed it before it fell to McBurnie, was offside when the free-kick came in 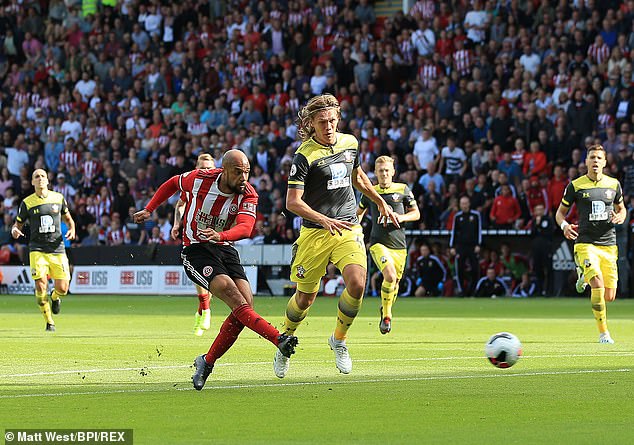 Both sides traded chances in a first-half high on intensity, if lacking a little in composure. Dean Henderson, in the Blades goal, was superb. The 22–year-old is on loan from Manchester United and, while few in the Stretford End would wish to see David de Gea depart, there is clearly a capable replacement on the club’s books.

Angus Gunn, Southampton’s keeper, was also excellent. Following the break the new boys thought they had the lead when Ollie Norwood’s free-kick was tapped in at the far post by McBurnie after John Egan had failed to finish. 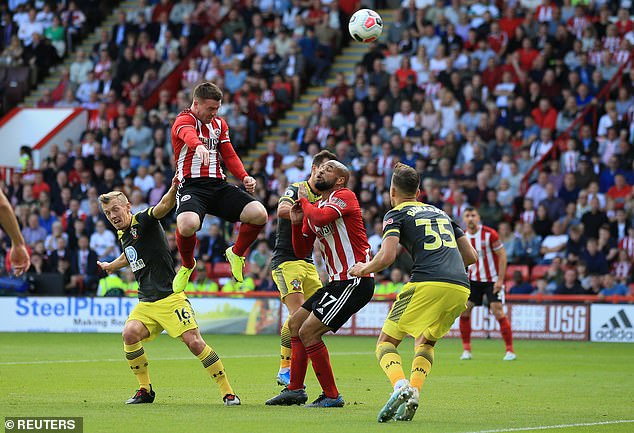 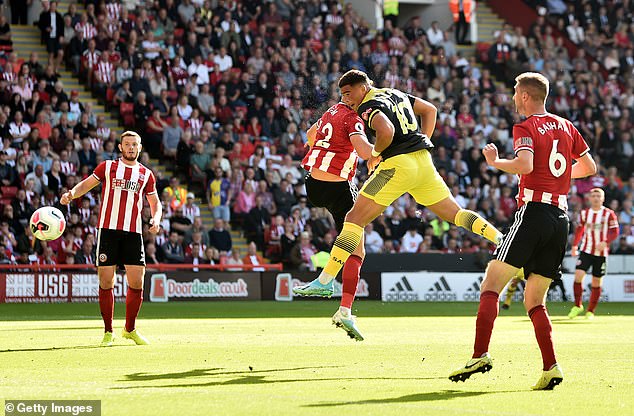 The home fans celebrated, but following a review Egan, who got a touch, was found to be offside. Nine minutes after Djenepo’s deadlock breaker, came the second technology interruption when it looked like Ward-Prowse had handled a cross at the far post but we know the rest.

In a frantic finale, Blades’ sub Billy Sharp was shown red 18 minutes after coming on for a reckless challenge on fellow sub Stuart Armstrong. ‘A striker’s challenge,’ his manager generously called it.

Despite that, the home side pressed for a leveller which they could not find. Wilder was reluctant to criticise his players, who have adjusted well to life in the top flight.

‘I can’t smash the players because the way we have played is great,’ he said. ‘But you have to punish teams and we didn’t do that today,’ he admitted. 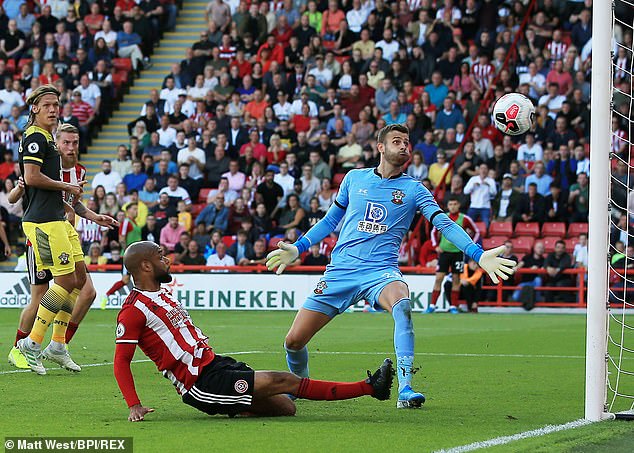 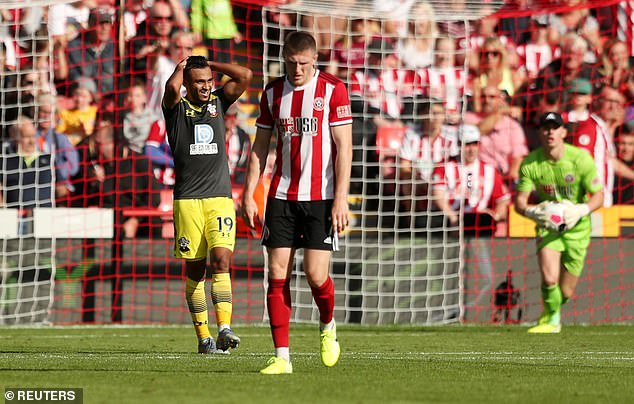