On an emotional Premier League homecoming to Bramall Lane, Sheffield United made it clear their new-found reputation for fancy football hasn’t come at the expense of still being able to mix it.

There was plenty of things to learn from a noisy and passionate return to top-flight football in Sheffield after a 12-year absence.

Chris Wilder’s side disproved the theory that the Premier League is no place for overlapping centre-backs when Jack O’Connell buccaneered forward and helped set up the only goal scored by John Lundstram after 47 minutes. 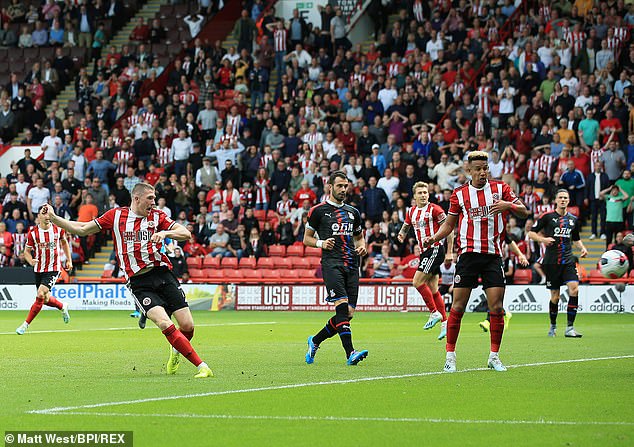 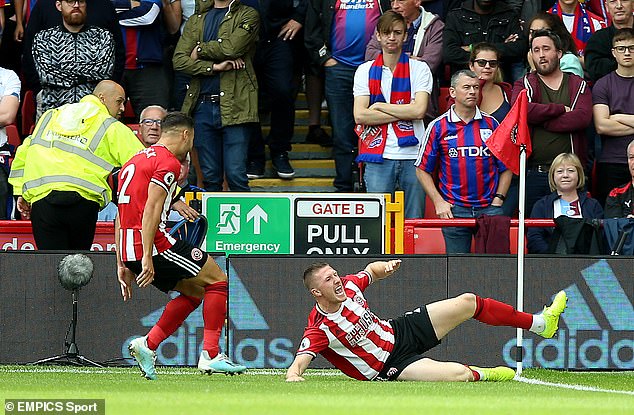 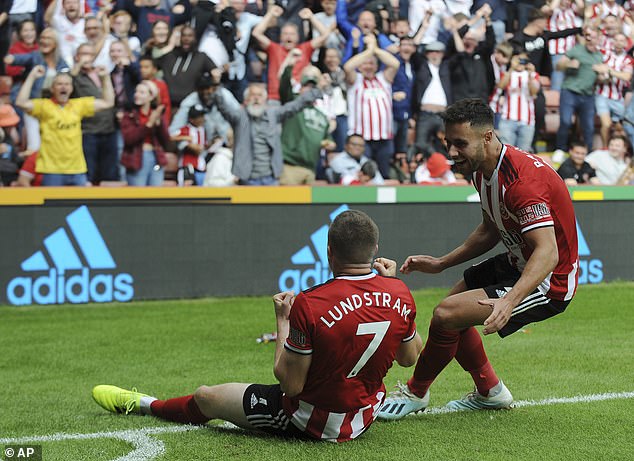 Bruises in the Palace dressing-room also taught us the Blades from south Yorkshire will retain their traditional cutting edge in the battle for survival. From Lundstram’s early reducer on Wilfried Zaha to a late kick by Chris Basham on Palace substitute James McCarthy, described as “nasty” by Eagles boss Roy Hodgson, United were at it.

Most importantly, there was enough in the underdogs performance to confirm they won’t be this season’s whipping boys. They were deserved victors, David McGoldrick missing a clear sitter before Lundstram’s winner, and after an unbeaten start to the campaign, they look in better shape than Palace who still await their first goal of the season.

‘We had to marry up the emotion with a disciplined performance as well,’ said Wilder, a boyhood Blades fan and former player who has taken them from League One to the promised land in just three years.

‘We needed a good shape to stop Palace from counter-attacking but as the home team we also wanted to go forward and create problems. I thought we got the balance right and later in the game we stood tough when they went more direct.

‘I know more than anybody what these supporters have gone through in recent years and they’ve kept coming back. This is definitely a day for them. Hopefully we are pointing in the right direction. We have to now go on and prove consistently we are at this level.’

The noise that greeted United’s players at kick off sent shivers down the spine. It’s been a long time coming and in the early stages, there was a danger the players would be overawed. 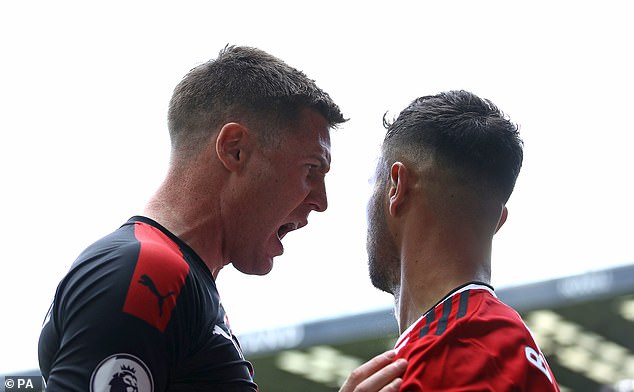 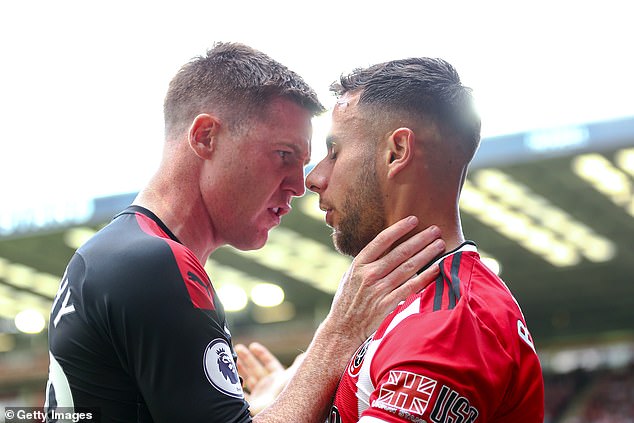 Indeed, Palace – with Zaha restored to the starting line-up – had the best chance of the opening half-hour when Christian Benteke muscled clear before firing at the legs of goalkeeper Stephen Henderson, on loan from Manchester United and being watched by England manager Gareth Southgate.

Gradually though the home side got into their normal rhythm with wing-backs Sam Baldock and Enda Stevens getting forward, occasionally supported on the flanks by Chris Basham and Jack O’Connell from the three-man defence.

A mistake by Patrick van Aanholt after 40 minutes should have cost Palace. Lundstram took up the loose ball and whipped in a perfect low cross for McGoldrick who somehow shot straight at goalkeeper Vicente Guiata from only four yards.

Fortunately for McGoldrick, his blushes were spared when United did break the deadlock early into the second half.

He in turn supplied Luke Freeman and with Palace floundering, Guiata could only parry the final shot into the path of Lundstram who buried the rebound for his first goal in 18 months. 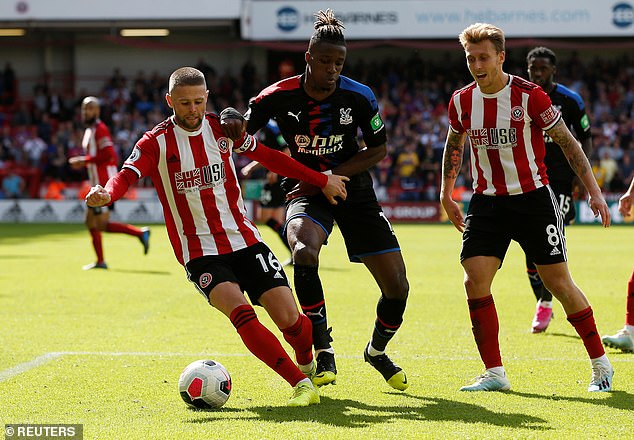 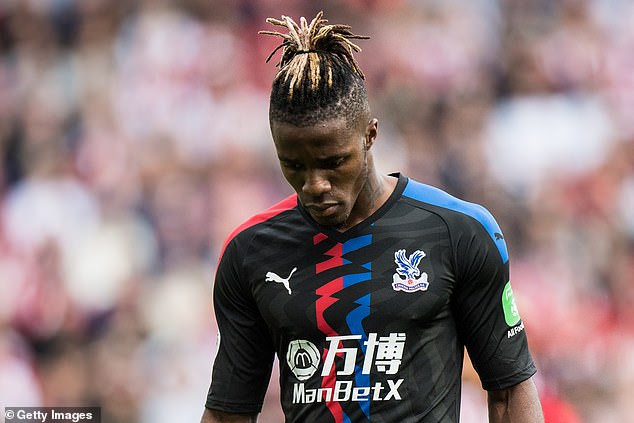 Lundstram, 25, is a typical Wilder signing, picked up for a bargain £500,000 from Oxford and now has the milestone of having scored in all four divisions. ‘He is a typical modern midfielder; athletic, mobile, technical,’ enthused Wilder.

Despite the length of time still remaining, Palace were unable to find that gilt-edged opportunity for an equaliser. ‘We didn’t do enough to get back in it. We seemed to lose our composure and some extent the passing quality after they scored,’ complained their boss Roy Hodgson.

He refused to condemn United’s physical approach even though Zaha seemed unhappy with it on the pitch. However, Hodgson did question why McCarthy was given equal punishment to Basham after reacting to a bad challenge.

‘It was a nasty one on the ankle and hurt him (McCarthy). As a football person, I find it hard to accept both got yellow cards,’ said the former England manager.

Wilder made it clear he wants his team to continue rattling cages as well as playing attractive football.

‘It is still a contact sport. People make tackles on the opposition. I don’t want to take that of fmy team and the supporter wants to see tackles made, in the right way,’ he said.

To complete a perfect day, Wilder sent on 36-year-old Phil Jagielka late on for his second debut for United. He’d been in the last Blades side to play in the Premier League in 2007 before rejoining from Everton this summer.

Klopp ‘infected by the disease of arrogance’ after winning a trophy,...