Steve Smith ‘will not participate’ in the final day’s play of the second Ashes Test at Lord’s due to concussion after being hit on the head by a 92mph delivery from Jofra Archer on Saturday.

England seamer Archer admitted his ‘heart skipped a beat’ after his delivery struck the Australian batsman on the neck during the second Ashes Test at Lord’s.

Smith, on 80 at the time, was initially forced to retire hurt after being laid out by the bouncer but later returned to add another 12 runs before being dismissed lbw by Chris Woakes.

There were anxious moments for everyone on the field as Smith laid on the ground having been struck below his helmet and Archer, making his Test debut, was especially concerned. 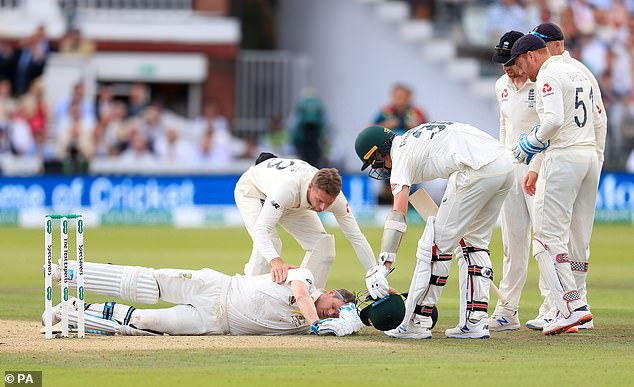 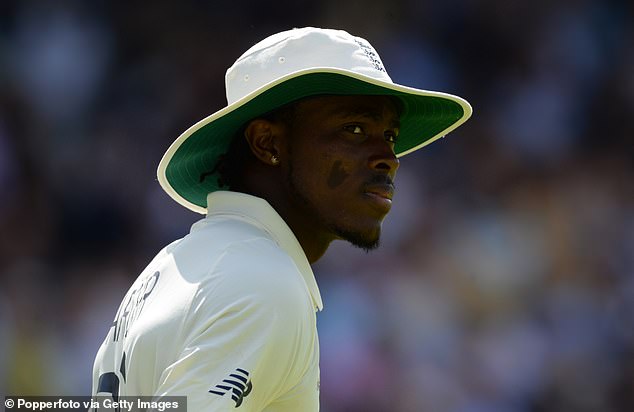 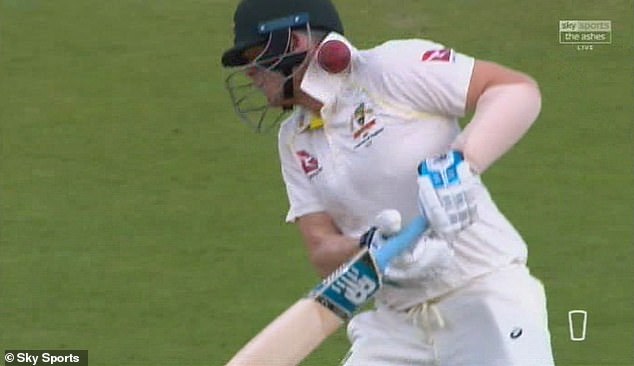 Smith turned away from a bouncer, which ended up hitting him underneath his helmet 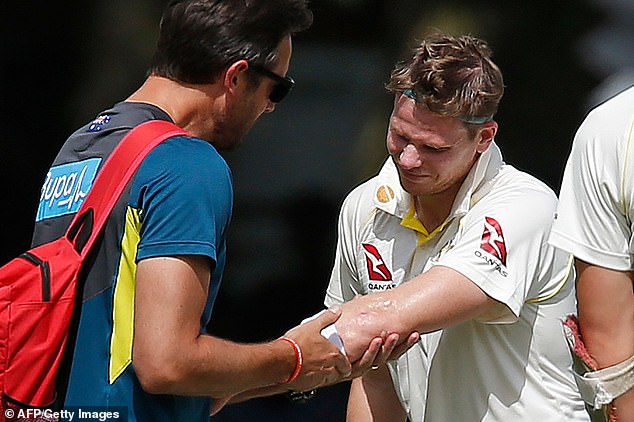 Smith was under attack from Archer for an extended period, being hit on the arm as well

He told Test Match Special: ‘That is never the plan [to hit the batsman]. You are trying to get a wicket first.

‘To see him go down, everyone stopped and everyone’s heart skipped a beat.

‘After he got up he was moving around and you breathe a sigh of relief. No-one wants to see anyone getting carried off on a stretcher.

‘It was a good challenge, a really good spell. For me, I wouldn’t like to see it end like that.’

Archer added on Sky Sports: ‘I honestly don’t know what I was thinking at the time, seeing someone go down, you don’t ever want to see anyone carried off on a stretcher, or you don’t want to see them missing a day, or a game, especially with what happened a few years ago as well [with the death of Australian batsman Phillip Hughes]. It’s never a nice sight.

‘I was trying to get him out, I had a short leg and a leg slip and he was trying to work the ball off his hip, so if one bounces a bit more it should go to short leg, or one of the guys waiting. 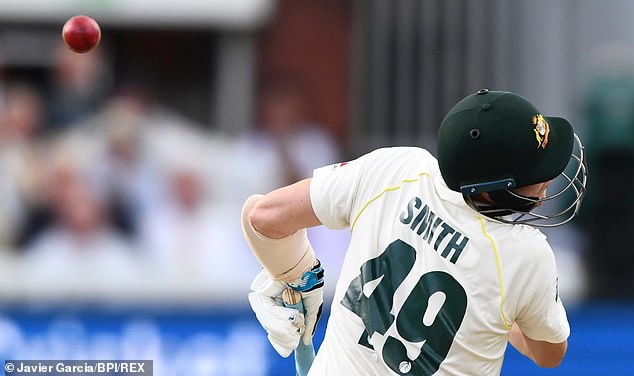 Smith retired on 80 from 152 balls, as Australia chased down England’s first innings total 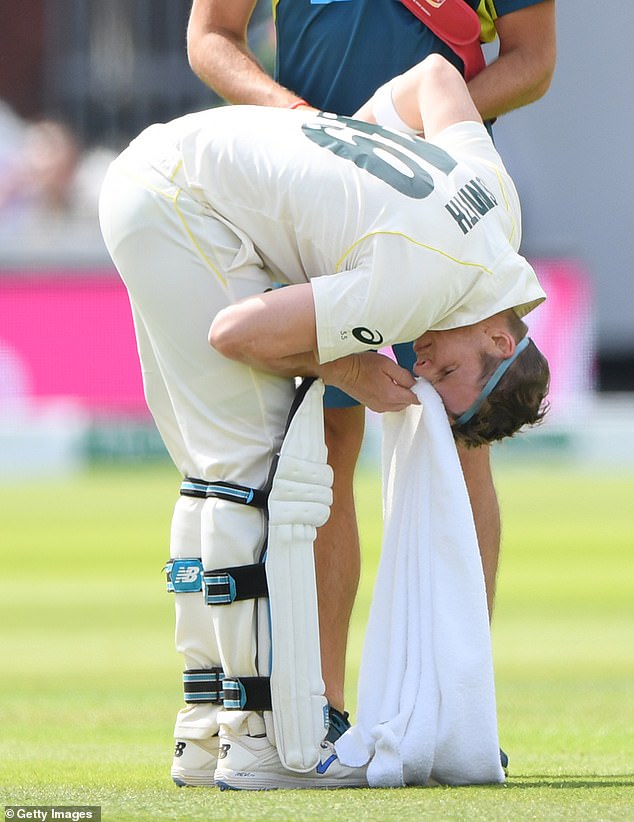 ‘It’s been like that a lot of the series really, a lot of balls haven’t gone to hand, landing in the gap, so yesterday was just great seeing him get out without scoring a hundred.’

After a few minutes of medical attention on the field, Smith was led off to a standing ovation and replaced by Peter Siddle.

He underwent mandatory concussion checks for 40 minutes and was deemed fit and well to return to the action after Siddle was dismissed.

Smith started scoring freely when he returned but it soon became apparent his judgement was impaired and he was denied a fourth successive Test century when Woakes trapped him for 92.

It was later revealed that Australia’s star man headed to hospital for a scan on his arm, where he was hit by an earlier ball by Archer. 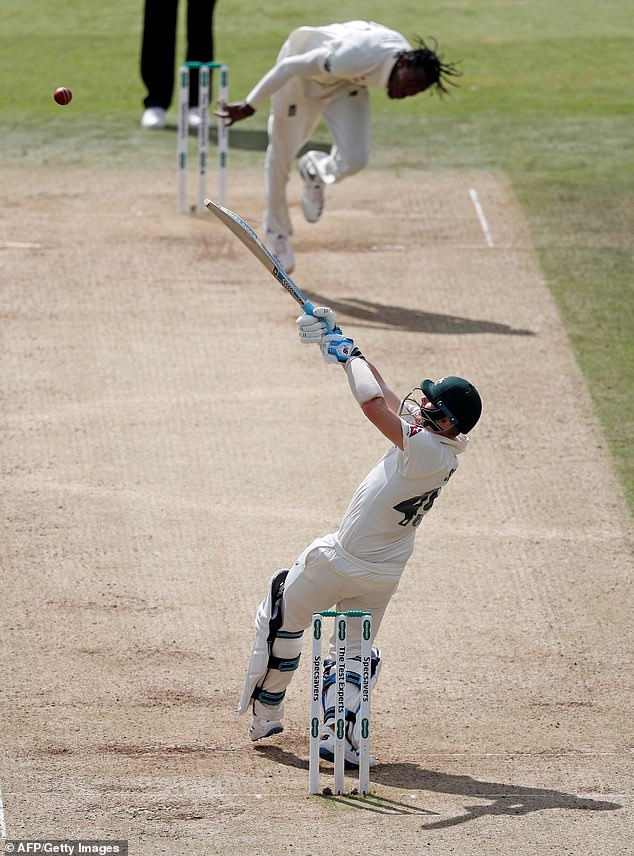 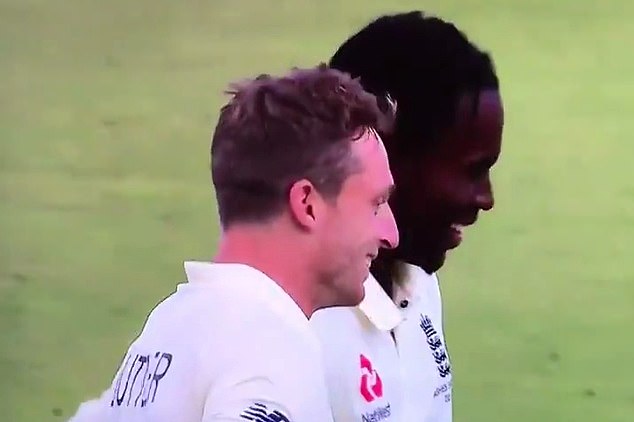 Scans revealed Smith had no fracture in his arm, and will be able to bat on the final day.

A statement from the Australian team said: ‘Steve was hit on the neck below the left ear. He was assessed lying on the pitch at the instructions of team doctor Richard Saw.

‘Dr Saw made the precautionary decision to remove Steve from the field of play to have him further assessed under Cricket Australia’s head impact protocol. Steve then passed his assessments and will now be monitored on an ongoing basis, as is routine.’

The Australian Cricketers’ Association has criticised the small minority of fans at Lord’s who booed Smith after he was felled.

‘The reality is that cricket can be a dangerous sport, especially when the bowling is as ferocious as it has been in this series. To see the (concussion) protocols practised at Lord’s overnight was important and correct,’ said an ACA statement.

‘What we witnessed was bravery from an outstanding young man. It should be commended not vilified.

‘Over the English summer, generally the crowds have been terrific and really added to the contest. But when someone is hurt, yet the boos continue, it’s time to call “enough”.

‘At any rate, the players have already served the toughest penalties in the history of cricket. Surely it is time to move forward.’

Cristiano Ronaldo has reached 50 goals in Italian football faster than...