Crystal Palace are stepping up efforts to sign Atalanta right back Timothy Castagne after the departure of Aaron Wan-Bissaka and injury to main target Nathaniel Clyne.

The 21-year-old joined Manchester United in a £50million deal and the Eagles and have yet to sign a replacement.

Hopes of re-signing Clyne from Liverpool fell through when the defender suffered a cruciate ligament injury during his club’s pre-season tour of the USA. 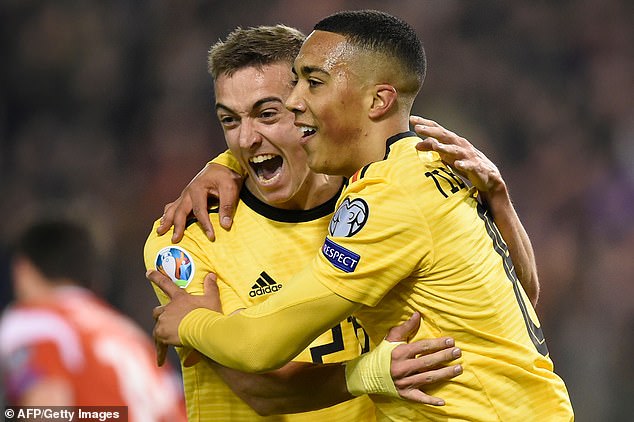 Timothy Castagne (left) has established himself as a regular for Belgium

He is now likely to miss most of the season and is not a viable target for this campaign.

Crystal Palace are yet to meet Atalanta’s valuation of Castagne, but remain confident they can seal a deal for the Belgian international.

The Italian side are trying to tie Castagne down to a new deal, but have so far failed to match his demands, leaving the door open for the Eagles to swoop.

Chelsea’s Eden Hazard takes dig at Spurs as they move into...