By Matt Lawton for the Daily Mail

To some extent it felt like normal service had been resumed here in the Alps, the sight of five Team Ineos riders leading the yellow jersey group up the final climb one we have certainly grown accustomed to these past few years.

On this occasion a team accused by the French this week of being boringly Anglo-Saxon showed a bit of what the locals would consider Latin flair, with both Egan Bernal and Geraint Thomas launching attacks before the summit of the mighty Galibier.

Bernal’s, executed 3km from the top, proved most effective, propelling him from fifth to second — and crucially took 32 seconds out of Thomas to go five ahead of his team-mate — in a manner that suggested the young Colombian might now be the favourite in a race that remains gloriously difficult to predict with two more massive mountain stages to come. 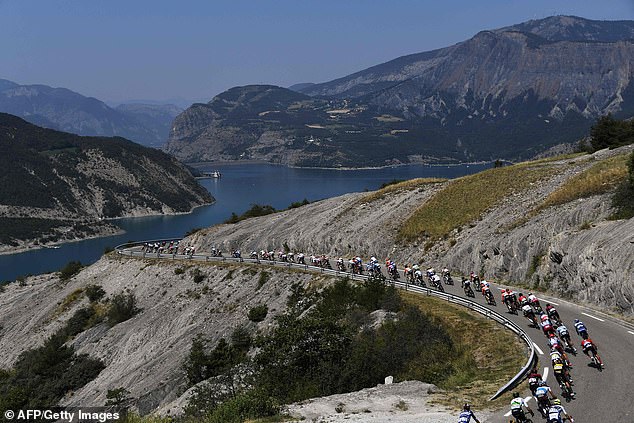 Thomas kicked later, too late said Sir Bradley Wiggins afterwards, and probably did more damage to his own legs than anyone else’s.

‘We wanted a hard pace and unfortunately we ran out of guys,’ he said.

Bernal, however, was flying, descending to a rain-soaked Valloire with great conviction and adding a few seconds to the gap he created with that surge towards the top of the Galibier.

It turned out to be a good day for riding up the great mountain, Nairo Quintana completing the 23km ascent in record time en route to a fine stage victory. 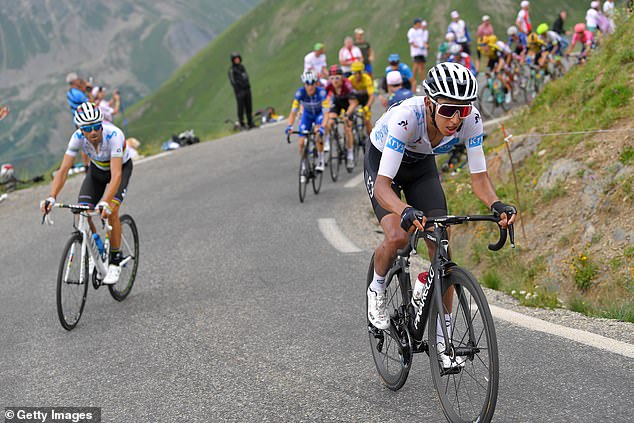 Julian Alaphilippe did not climb so well, losing around 20 seconds on the final part of the climb after cracking under the pressure exerted by Thomas.

Video evidence later revealed he actually received a push as well as a bottle from a team member, but on this occasion what looked like a breach of the rules escaped the attention of the UCI commissaires.

But the man who simply refuses to surrender the maillot jaune delivered yet another defiant display here, descending like a demon to catch his main rivals — with the exception, of course, of Bernal — and retaining a 90-second lead. At one point he hit an eye-watering 88.1kmph.

‘I went full gas and took some risks,’ he said afterwards.

The next two stages present a more daunting challenge for a Frenchman who continues to look like the weakest climber of the six riders fighting it out in the general classification.

Indeed, to many observers it remains inconceivable that Alaphilippe will still be in yellow once the riders have completed those summit finishes in Tignes and Val Thorens.

But predictions of his demise have so far proved as dangerous as predicting the winner of this Tour, with this stage fuelling yet more doubt.

‘We knew it would be hard to drop Alaphilippe today,’ said Thomas. ‘But there are two more big days to come.’