Masar, the 2018 Derby winner, could have run his last race after finishing last in the Princess of Wales‘s Stakes at Newmarket.

The Godolphin-owned colt, who was injured after his Derby win, made his comeback at Royal Ascot last month when fifth to Defoe in the Hardwicke Stakes and trainer Charlie Appleby had talked positively before the race.

But after jockey James Doyle had eased Masar to be beaten almost six lengths behind Mark Johnston-trained Communique, Appleby said: ‘Unfortunately they have gone no gallop and he has over-raced with James. It’s annoying because he was in as good a nick as we could have him. 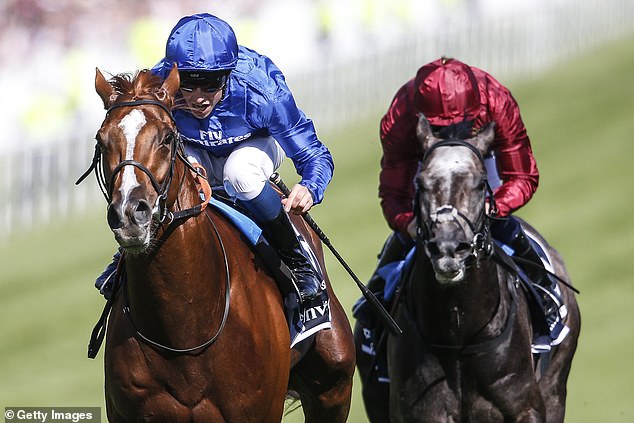 ‘It has gone through our minds a few times to drop back to 10f but I will speak to His Highness Sheik Mohammed and decide his future. We are talking about a past Derby winner so we don’t want to keep going to the well if it is not going to be fruitful.

‘Like any horse coming back after a lay-off I was wanting to get his head in front to give him some confidence but it has not happened.’

Communique’s trainer Mark Johnston conceded he had not expected to win. He added: ‘I thought it would be a tall order to beat Masar but he doesn’t appear to have run up to his best.

‘I have never been disappointed with Communique in any race he has run in. He’s won two Group Two’s now and although he’s been beaten when he’s tried Group One company, I am still hopeful one can come his way.’

There was a St Leger quote of 14-1 (Ladbrokes) for David Simcock-trained Spanish Mission after he stayed on for a decisive four-length win in the Bahrain Trophy under Jamie Spencer but 13-2 shot looks to have his sights set on more distant prizes.

The son of Noble Mission is US owned and Simcock said a new $1million Turf race at Belmont Park in New York on September 7 had been the colt’s intended target.

Thought might be put into the St Leger, for which he would have to be supplemented, but it remained odds-on Spanish Mission’s immediate future lay on the other side of the Atlantic.

Johnston-trained Bahrain Stakes runner-up Nayef Road, however, looks like he will head to the St Leger.

Johnston said: ‘Nayef Road has run a very good race and beat the rest comfortably. For a horse that was stuck in handicap company at a mile and a quarter, going up in distance has turned him into a Group horse. We now have to probably start working back from the St Leger.’

Aidan O’Brien-trained Royal Lytham edged home by a short-head in the Tattersalls July Stakes under Wayne Lordan from Platinum Star with odds on favourite Visinari a head further back in fourth.

A quote of 25-1 (Sky Bet) for Royal Lytham in next year’s 2,000 Guineas reflected the fact that, at this stage, the July Stakes contenders will have to step up considerably to look like potential Classic contenders.

The result was another feather in the cap for Royal Lytham’s first-season sire Gleneagles. Six of the 17 progeny that have run so far this season have win and the July Stakes group two win followed Southern Hill’s win in the Windsor Castle Stakes at Royal Ascot.

‘We were the Gladiators… I still miss it!’ NFL legend Rice hopes the new generation can take over

Record number of police will be deployed by for Champions League...

Rafael Nadal insists ‘everyone should be happy’ to see Andy Murray...