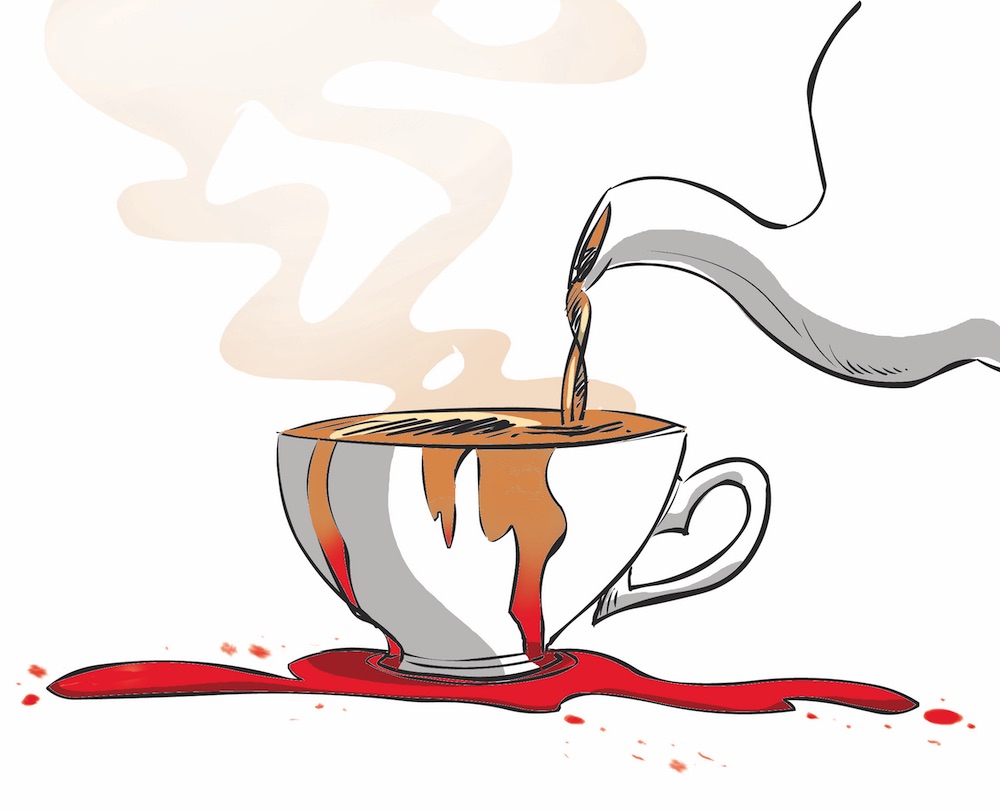 One of the more mischievous stories as to why the British drink so much tea was penned by René Goscinny and Albert Uderzo. Astérix chez les Bretons, released in 1966, attributed the British addiction to a cup of tea to Astérix. In an effort to encourage the Brits against the invading Romans, the diminutive Gaul concocted a brew to trick them into believing in themselves. Drunk on their success, the British named Astérix’s counterfeit magic potion ‘tea’ and declared it their national drink, after the, inexplicable, addition of ‘un nuage de lait.’

‘What does anybody in the world know about an English person except that they can’t get through the day without a cup of tea?’ Stuart Hall, the Jamaican born intellectual, posed this rhetorical question in an essay published in 1991. This is a fair observation: after all, the British Isles are not known for their plentiful tea plantations. Tea, often grown in India or Sri Lanka, had come to be a ‘symbolisation of English identity.’ These long, complicated, and often oppressive, imperial relationships were at the forefront of Hall’s mind. In his own inimitable words:

‘I am the sugar at the bottom of the English cup of tea. I am the sweet tooth, the sugar plantations that rotted the generations of English children’s teeth.’

The legacies of Empire are unavoidable, even in what may initially seem to be a harmless cup of tea. No meaningful history of Europe can exist without including an honest account of this ‘other’ history. This, however, has not stopped British politicians from indulging in verbal gymnastics to avoid saying the most obvious word: sorry.

British aversion to apologies was most recently on display during the centenary commemorations of the Jallianwala Bagh massacre (also known in Britain as the Amritsar massacre). On 13th April 1919, the British Commander, Brigadier-General Reginald Dyer ordered the troops under his command in India to open fire on an unarmed crowd that had gathered in Jallianwala Bagh. What followed was the bloodiest massacre in the history of the British Empire – resulting in the deaths of 379 people.

In April earlier this year, it fell to Prime Minister Theresa May to deliver a statement to the House of Commons reflecting on the massacre. The most the Prime Minister could express was her ‘regret [for] what happened and the suffering caused.’ Similarly, when a Minister of State at the Foreign Office, Mark Field, spoke during the debate in the House of Commons, he made it clear what the government’s priorities were. Field deemed it ‘not appropriate’ to make an apology for the Jallianwala Bagh massacre. He, unlike the Prime Minister who appointed him, was remarkably plain speaking: ‘any Government Department has concerns about making any apology, given that there may well be financial implications to doing so.’ The British government is parsimonious with its words in this area of modern foreign policy.

This is a recurring theme in modern Britain. When David Cameron, Theresa May’s predecessor, visited Jamaica in 2015 he acknowledged that ‘slavery was abhorrent in all its forms.’ However, he stopped short of offering an apology, presumably in fear of the potential financial implications of such an admission. Instead Cameron claimed that it was time to ‘move on from this painful legacy.’ This was in the face of various Caribbean governments and activists calling for some form of reparations to accompany an apology.

Cameron was keener to stress the role that Britain played in abolishing slavery; he gave less prominence to the role the slave trade played in establishing British power and wealth. Perhaps he had a point, Britain did abolish slavery in 1833. And it did in fact pay compensation. Unfortunately, formerly enslaved people did not receive this money. The beneficiaries of this financial windfall were slave owners, who were compensated for the ‘loss of human property.’ In 1834, £20 million was paid to those who had owned enslaved people, worth around £17 billion today. It seems it was easier for David Cameron to ‘move on’ from slavery: his relative General Sir James Duff was paid the modern equivalent of £3 million for the loss of 202 enslaved people on a sugar estate in Jamaica. This tendency is not confined to Conservative politicians. The Labour Chancellor and later Prime Minister Gordon Brown said in 2005 that ‘the days of Britain having to apologise for its colonial history are over.’ This statement left many people around the world scratching their heads – when has Britain ever issued a significant apology for its colonial history.

‘The best fate for Africa would be if the old colonial powers […] scrambled once again in her direction; on the understanding that this time they will not be asked to feel guilty.’

These words were written by Boris Johnson in 2002. On his current trajectory, he is likely to be the next Prime Minister of Great Britain and Northern Ireland. Pigs may fly before Johnson issues any apology for the actions of the British Empire. But what would be the point of an apology? The level of historical illiteracy in British political discourse is distressing. Astérix chez les Bretons feels like a more accurate account of a Brexiteer politician’s world view – in the face of an invading continental force (the EU, not the Romans in this instance) – Britons must believe in their own greatness to unlock the potential of a liberated nation. This is the refrain common to many Brexit enthusiasts in the United Kingdom. However, this fundamentally misunderstands the relation between Britain and its Empire. Britain did not have an empire because it was a ‘great’ country; the Empire was a source of its power and wealth. An apology would allow politicians and commentators to present the massacre at Jallianwala Bagh or the treatment of the Mau Mau Uprising in Kenya as aberrations in British Imperial history. An honest account of British history would see that the Empire included slavery, indentured labour, violence, oppression, and, yes, sometimes, collaboration. These were structural features of the imperial project, not exceptions.

If not an apology, maybe Britain would be better off seeking to bear its responsibility in shaping the modern world and engage with its past more ethically. Furthermore, Chagossians may take issue with the idea that colonisation belongs in the past. The Chagos Archipelago remains under British administration, in spite of the International Court of Justice ruling that Britain had yet to ‘complete the decolonisation of Mauritius.’ A judgement which the current British government has refused to accept, leaving Chagossians as a displaced people. ‘Personne n’a su ni rien oublier ni rien apprendre’ is a saying often attributed to Talleyrand, the French diplomat of the 18th century. This seems particularly true of the British political class of 2019: they have learnt nothing and forgotten nothing.