By Mike Dickson for MailOnline

Roger Federer kept up his side of the bargain in trying to set up a Wimbledon rematch with Rafael Nadal when he made it through to the semi-finals.

It would be their 37th meeting overall and the first at Wimbledon since their classic 2008 final. 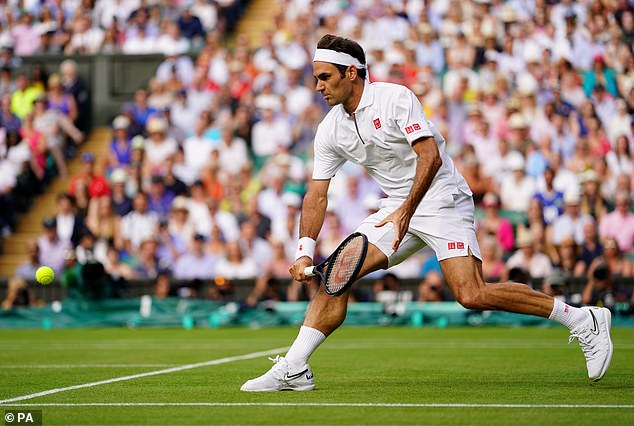 ‘It was difficult the beginning was brutal, I had to make some adjustments, Kei was the better player and it was important for me to get the lead in the second,’said Federer after his 100th singles win at SW19. ‘It was a great serving performance at the end against a good returner.

‘We have a lot of information on Rafa, I know people always hype it up and they did that in Paris but it was a joy to play against Rafa. I would be very excited to play against him but I will approach it like any other match.’

The men’s tournament has not been overburdened with memorable matches but this promised plenty when Nishikori broke in the very first game, and then backed it up for the rest of the opener with smart forays into the net, disarming the Swiss.

His response was all out attack and it was fairly spectacular, ripping through the second set in 22 minutes. The pressure was telling on the Japanese , who conceded a break point at 3-3 in the third when Federer blasted a forehand winner.

Federer forced four break points early in the third and the dam broke when Nishikori fired long at 4-4 to be broken decisively.

Barcelona ready to return with £30m bid for Willian as they...

Daniel Dubois insists he is ready to take on the best...