By Marcus Townend For The Mail On Sunday

Frankie Dettori gave Enable the ultimate accolade saying she is the best horse he has ever ridden as she made a foot-perfect winning comeback in the £750,000 Coral-Eclipse Stakes at Sandown.

The John Gosden-trained 4-6 favourite beat old rival Magical three-quarters of a length but winning distance did little justice to Enable’s superiority in a race where Dettori was always in control.

The 2019 Flat season had lacked sparkle so far but the return of the Queen of the Turf has injected a frisson of excitement and anticipation. 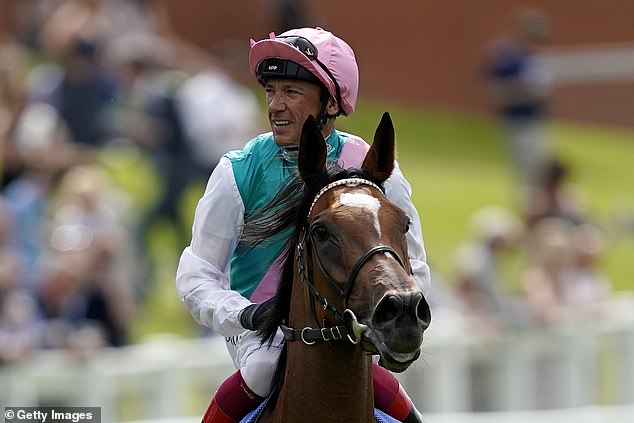 Dettori, who said he had had to restrain Khaled Abdullah-owned Enable to the two-furlong pole because she was travelling so well, added: ‘She was entitle to get a little tired at the end but was always in control. What a great feeling!

‘I was the last one off the bridle. She has so many gears and an unbelievable will to win. She is the best I have ridden, her C.V is the best.

‘You could argue (Dettori’s 2015 Derby winner) Golden Horn was better but Enable’s longevity is incredible.

‘In the back of our mind we were very confident but the race will bring her on. She is a superstar and she delivers.

‘I never stop getting excited when I ride her in the mornings and she is very special and I love her.’

Enable has now won 11 of her 12 races and almost £8.5million. The Eclipse win was her first at 10 furlongs but the drop back from her best distance of a mile and a half proved no problem. 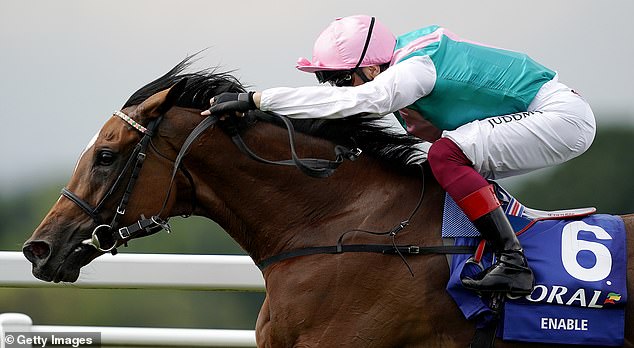 Gosden said: ‘It’s great to have her back eight months since she ran. She is very competitive but it did not begin to show until the last 14 days. Suddenly this edge came back.

‘It was very apparent in her behaviour. You go in her box and it’s her space. Don’t mess with her, she will split you in two.’

The euphoria Enable created was reflected in the Sandown crowd. They chanted the name of Dettori, who was also successful on Falcon Eight and Mojito, name to the tune of Seven Nation Army by The White Stripes.

Enable was only the third of her gender to win the Eclipse – Pebbles (1985) and Kooyonga (1992) were the other two – and her main aim this season is to become the first horse to win the Prix De L’Arc De Triomphe three times.

She won the Arc last year off an injury-interrupted preparation. This year Gosden will aim for the King George VI & Queen Elizabeth Stakes, which she won in 2017, at Ascot on July 27 and either the Juddmonte International Stakes or Yorkshire Oaks at York in August.

Valtteri Bottas admits Mercedes have no answer to Ferrari pace for...