Paul Jubb’s preparations for Wimbledon were undermined after he lost in straight sets to America’s Taylor Fritz in the Nature Valley International at Eastbourne.

The promising 19-year-old will make his SW19 debut next week having furthered his profile by progressing to the first round at Eastbourne, with victory in qualification over Russia‘s Andrey Rublev.

He appeared tired against Fritz, who largely eased to his 6-2 6-3 first-round victory while breaking Jubb’s serve four times, but will relish the much-needed recovery time before heading to Wimbledon – where he could face his idol Novak Djokovic, who he has modelled his game on. 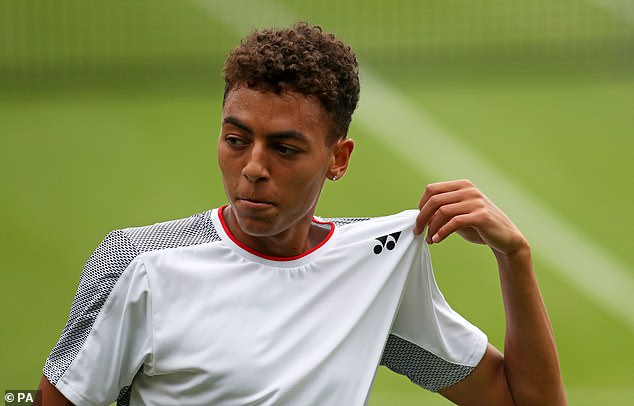 Paul Jubb lost in two sets to Taylor Fritz at Eastbourne, but he’s looking ahead to Wimbledon 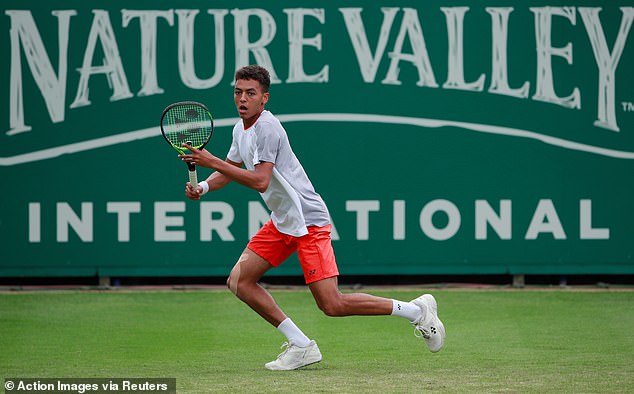 The Brit now has more time to prepare for Wimbledon, and he may face his idol Novak Djokovic

‘It’s been a tough four weeks,’ said Jubb, from Hull, who remains an amateur and at the University of South Carolina. ‘The grass is a bit tough on the body. Recovery is key right now.

‘(It was) another good match under the belt for more experience, and that’s all I’m trying to gain now.

‘(Fritz) doesn’t give much rhythm. Obviously he serves really well; has a huge forehand. He takes a lot of points away from you so there’s not much rhythm there.

‘I’ll just be relaxing and hopefully the legs will get fresher. I’ll probably go back to London and train some more and prepare for Wimby.

‘A few more people have started to recognise me, which is a bit weird.

‘(Wimbledon) is going to be just a great experience and just one that I’m willing to make the most of. 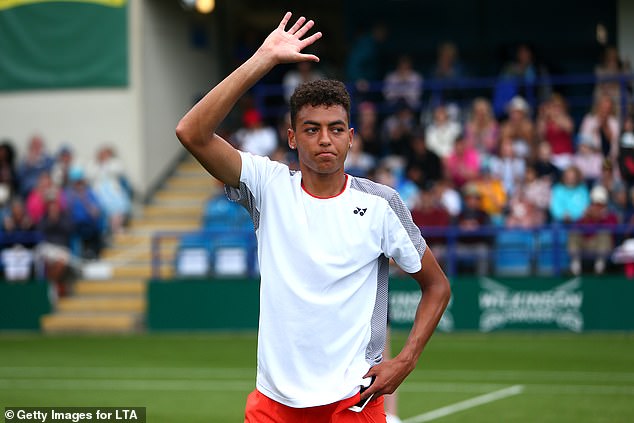 ‘(Wimbledon) is going to be just a great experience,’ said Paul Jubb of Great Britain

‘It will probably hit me once I walk out onto the court. I’ve got my coach from America (visiting). He’s already booked his flight and one more person from America. They’re coming over.

‘I have already had a lot of people saying they’re going to try and make it. It’s nice.’

Asked of his admiration for world number one Djokovic, Jubb responded: ‘I just love the way he moves so elegantly and just the way he plays. Just the way he can shut down the court, physically outplay people. I just love his game.

‘I have studied Novak’s game for so long and that return stance, I felt comfortable doing that. I have used that stance for a long time.

‘I’m ready just to go out there and compete my hardest, really. It’s not something to be scared of, really. Otherwise it could be an opportunity that’s wasted.

‘Obviously it’s a little overwhelming, but it’s something you’ve got to handle and something I think I can.’ 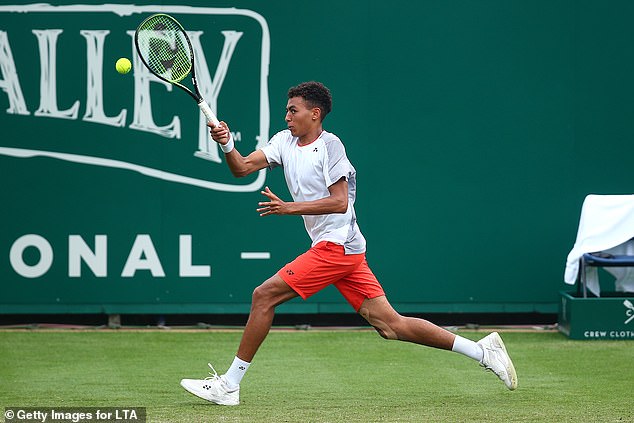 Jubb’s compatriot Cameron Norrie led France’s Jeremy Chardy 3-0 in the opening set of their first-round match when play was suspended.

They will resume on Tuesday, where the winner will progress to meet British number one Kyle Edmund in the second round.

There was also victory for world number 14 Caroline Wozniacki, via a 6-3 6-4 scoreline over Kirsten Flipkens of Belgium, on the same day new world number one Ashleigh Barty withdrew with a right arm injury.

World number three Karolina Pliskova played in the second-round, after a first-round bye, and secured a routine 6-3 6-3 victory over Margarita Gasparyan.