The inevitable Premiership final takes place on Saturday, with Exeter and Saracens dodging snipers all the way to Twickenham.

This is a duopoly damned by faint praise. These clubs are often derided as boring but brilliant.

See how much they care as they tussle for the title once again. 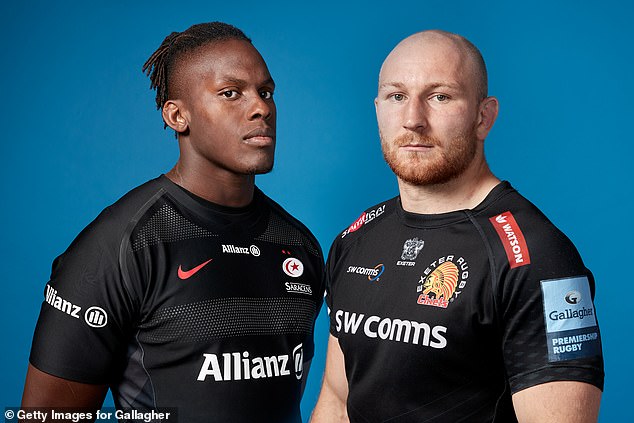 Last weekend, as the champions put Gloucester to the sword, their supporters ironically acclaimed them with chants of ‘boring, boring Saracens’ at Allianz Park.

All six of their tries were scored by backs. Their attacking play was fast and accurate and mesmerising. Again.

Down in Devon, once the Chiefs had dispatched Northampton in their play-off to ensure that first and second in the league would contest the decider this afternoon, the vanquished visitors left with a parting shot. 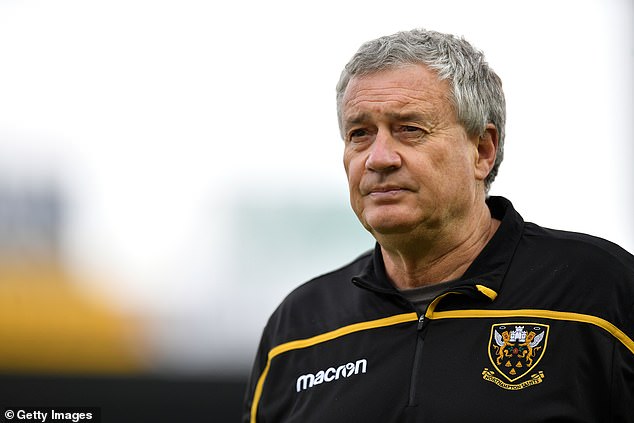 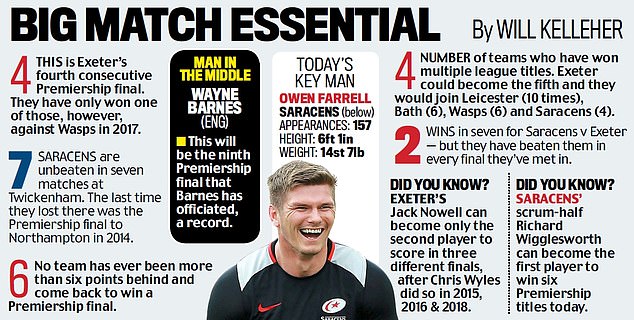 ‘It’s important that the clubs that play with a bit more optimism find a way to get closer to Exeter and Saracens,’ said Saints director of rugby Chris Boyd.

‘You can play the power game domestically — and Saracens have got to a point where the power game has been rewarding for them in Europe — but there are only one or two teams that can play that style and be successful.’

They certainly are successful. Saracens have just conquered Europe again and are on the hunt for another Double — and their fourth league title in five years.

It must be noted that they are also the subject of an investigation into alleged breaches of the Premiership salary cap, but put aside that uncomfortable backdrop and this is a magnificent team reaching new heights.

As for Exeter, they are in the final for the fourth year in a row. They finished top of the table by eight points and were top try-scorers with 89 — 12 more than Saracens managed, as the runners-up in that particular chart, as well as in the overall standings.

Exeter’s critics argue that too many of their tries come from a formidable close-range driving game, but they argue back with gusto. 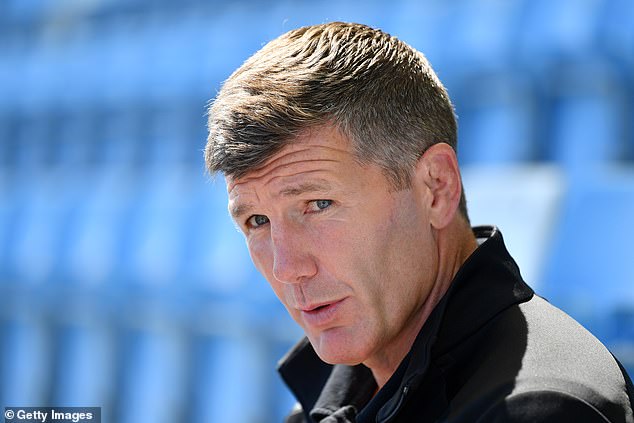 ‘If all you want to focus on is the period of play when we are five metres from the line, do that, but there are another 95 metres on a rugby field,’ said head coach Rob Baxter. ‘What about how we got there and the decisions we made to get there? 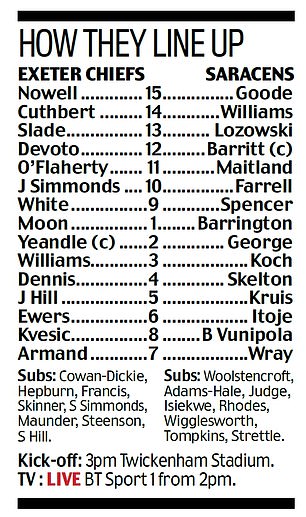 ‘Chris Boyd made a comment about ‘optimism’. Well, we didn’t take a drop goal last Saturday, Northampton did. There is nothing that shows less optimism than taking a drop goal — ‘we’ve got possession but we are not going to try to score a try’.

‘We didn’t take a shot at goal in the semi-final. Every other team did. Who is the team playing with optimism then? We got down there by chancing our arm and saying we are prepared to score tries. We don’t mind how we score them. We have a number of ways. We are not going to pick-and-go from halfway and never have done.’

Ambition won’t be left at the gates — both teams prioritise substance over style, without the two elements being mutually exclusive.

In the build-up, there was incredulity on both sides at any suggestion that they could win without taking control of the power battle up front and in midfield. 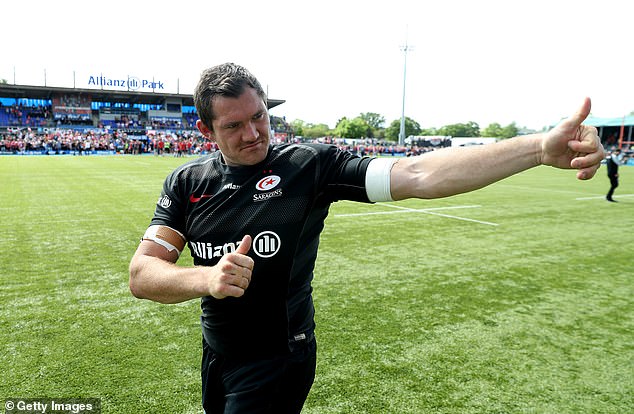 Contrasting methods will be on display. Exeter like to win the ball and keep it, go through the phases and — in the words of Boyd — ‘grind down’ their opponents.

McCall gave his own take, saying: ‘They are a very physical team. The big thing is to limit their entries into your 22 because once they get into your 22 they are very good, as we saw in both games against Northampton.’

Saracens need their fabled ‘Wolfpack’ defence to hold the line higher up the field.

The Chiefs will charge their pack with taking a firm grip on proceedings, as they did a year ago, but this time maintaining that grip —as they failed to do in the 2018 final.

Their No 8 Matt Kvesic was not involved then, but he has been outstanding in this campaign.

He addressed the teams’ contrasting approaches, with Saracens primed to again use their aerial prowess as a launchpad. 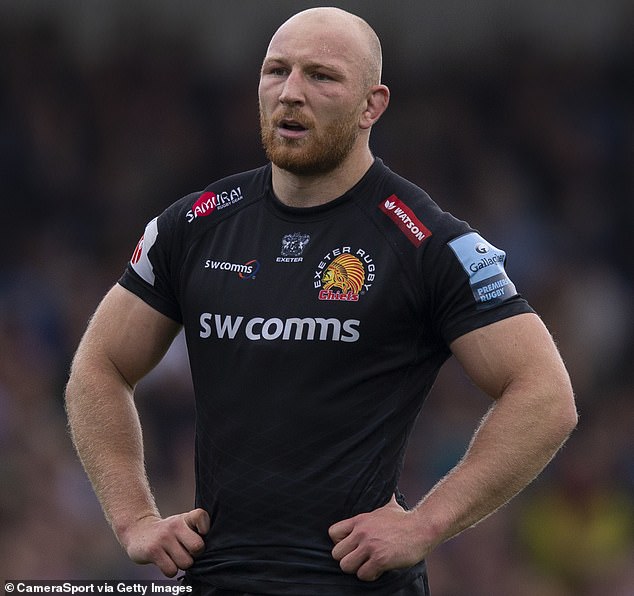 ‘We like to keep the ball because the best form of defence is attack,’ he said. ‘There is a perception about Saracens. Yes, they kick more than other teams, but they have really developed their attack and it’s lethal — hence they won the European Cup. It will be two different styles of play.’

One of the key tasks for Exeter will be stopping the gainline- busting charges by Will Skelton and Billy Vunipola, which provide Saracens with such devastating momentum.

Asked how he will go about doing that, Kvesic added: ‘Definitely head in the spokes straight away. Go nice and low. The bigger they are, the harder they fall!’

Despite the fact that the Chiefs finished top of the pile after 22 league matches this season, there is a sense that Saracens are the clear favourites. That suits the Devonians just fine. 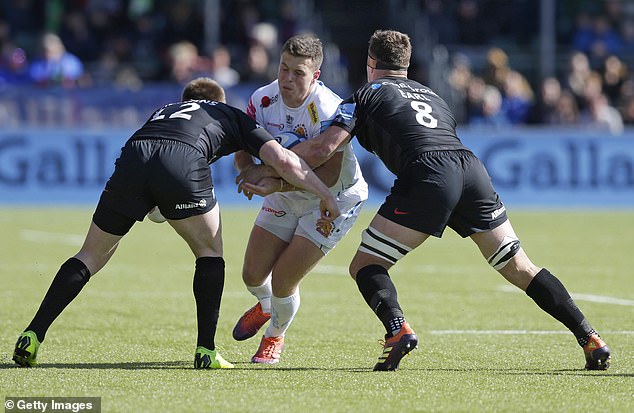 ‘Saracens are the European champions and have been playing great rugby all season so I feel we are going into this as underdogs,’ said Kvesic. ‘That suits us to a tee. It can make us dangerous.’

Exeter certainly will be dangerous.

They are fervently driven by the pain of last May’s showpiece and are no longer just content to reach this exalted level.

They have vast power up front and electricity in the wide areas. They are well coached and confident.

But Saracens appear to have the aces in most areas. They are favourites for a reason.

If Exeter can go toe-to-toe with them and perhaps even upset them, it will be a momentous feat — and it will create a final which is anything but boring.

Real Madrid confirm they will have a women’s football team for...