Roman Abramovich saw Chelsea ease to victory in New England, raising more than £3.1million to combat discrimination but any delight and self-congratulation was muted by what appeared to be a serious injury to Ruben Loftus-Cheek.

Maurizio Sarri’s worst fears about this post-season fixture were realised when Loftus-Cheek went down clutching an ankle within 20 minutes of coming on at as a half-time substitute.

He twisted in agony as he was treated on the pitch, was helped back to the dressing room by two of the medical team and left the Gillette Stadium on crutches with his left foot in a protective boot. 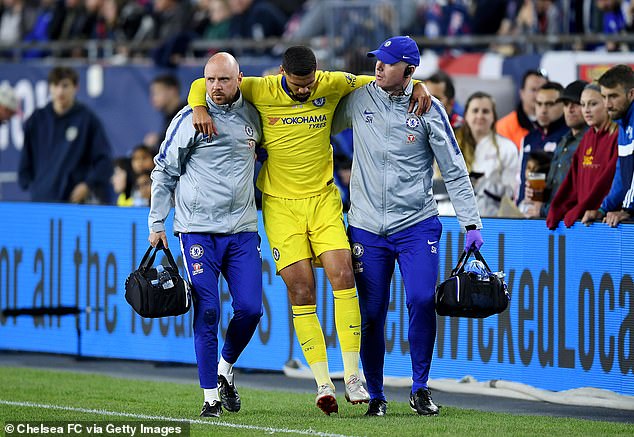 The initial assessments were not positive and Loftus-Cheek is unlikely to be fit in time for the Europa League final against Arsenal in Baku, in less than two weeks.

His participation in England’s bid to win the UEFA Nations League in June must also be under threat with Gareth Southgate set to name his name on Thursday.

It is terrible misfortune for a player who has suffered more than his share of injuries during his young career.

Sarri did not comment after the match – he has not spoken in public during the three days in Boston – but did not attempt to hide his frustration on the touchline.

The Chelsea manager has been unimpressed by the timing of this match, a friendly contest devised by owner Abramovich and Robert Kraft, the billionaire owner of the New England Revolution, and billed as the ‘Final Whistle on Hate’.

Millions will go to groups committed to fighting anti-Semitism and other forms of discrimination and a crowd of over 27,000 turned out to see the Premier League team play in Massachusetts against the Revolution.

Sarri had reservations before leaving London. ‘Unfortunately we have to go to the United States,’ he said, immediately after winning the Europa League semi-final in a shootout against Eintracht Frankfurt. ‘I think in this moment we need to rest.’

When he turned up at the stadium and saw the state of the grass pitch – freshly rolled out, patchy and slow – his heart must have sunk even more.

The Italian did not join the 23 players and chairman Bruce Buck on a visit to a Holocaust Memorial on Tuesday because of a stomach upset and his attitude towards the charity fixture has not been well received by Abramovich who was in the stadium to watch his team play for the first time since his UK visa was not renewed last year.

Abramovich could be seen before kick-off, in conversation with Kraft and Bruce Arena, the newly appointed head coach of the Revs, and visited the dressing rooms afterwards.

The injury to Loftus-Cheek will distract from the good intentions behind his initiative and Sarri will have flown home overnight nursing a strong sense of vindication.

His players will finally have time to catch up some rest and recovery before belatedly turning their attention towards Arsenal in Baku.

At least they hope to have N’Golo Kante back after a hamstring injury. Kante was not among the 23 players who travelled to the USA but it was a strong squad and the manager gave all but two of them a run.

Eden Hazard started up front to the delight of the New England crowd and David Luiz was the captain in the absence of Cesar Azpilicueta.

Chelsea went ahead after only 127 seconds when the Revs failed to clear a cross from Pedro and Ross Barkley beat goalkeeper Matt Turner with a curling shot.

Olivier Giroud scored the second, a diving header from an overlapping run and cross by right back Davide Zappacosta.

It was the trigger for a wave of six substitutions by the home team, after only 30 minutes, a reminder if needed of the nature of the game.

By the start of the second half the Revs had only two of their starting XI left on the pitch.

They are back in MLS action at Montreal Impact on Saturday and desperately in need of an upturn in fortunes, having started the campaign poorly,

Chelsea made six changes at half time. Willy Caballero replaced Kepa in goal. Willian came on for Hazard. Cesar Azpilicueta took the captain’s armband from Luiz and played again in central defence. Emerson, Gonzalo Higuain and Loftus-Cheek were the others.

The pattern of the game remained largely the same. Chelsea controlled possession with comfort and the Revs were restricted to occasional forays on the counter-attack.

Higuain struck the bar and then Barkley claimed his second of the night with a glancing final touch to a smartly worked corner.

Willian dragged the ball low and Higuain timed his run from deep to meet it with a first-time effort with his right foot which clipped Barkley on its way past substitute ‘keeper Brad Knighton.

Loftus-Cheek’s injury subdued the mood. He was replaced by 19-year-old Conor Gallagher. Fellow teenagers Reece James and Trevoh Chalobah followed from the bench and there was a brief cameo appearance for 39-year-old Rob Green.

Willian had a late strike ruled out for offside.

Jose Mourinho admits he did not find a ‘perfect situation’ at...