The Stadio San Paolo’s PA system blared out Guns N’ Roses anthem Welcome to the Jungle before kick-off, as if to suggest Arsenal were in for hellish night.

Like Tarzan, Unai Emery’s came to the jungle, saw the jungle before conquering it.

But in reality this was nothing like the jungle, more like a leisurely stroll in the park as Arsenal set up a Europa League semi-final against Valencia without breaking into a sweat. 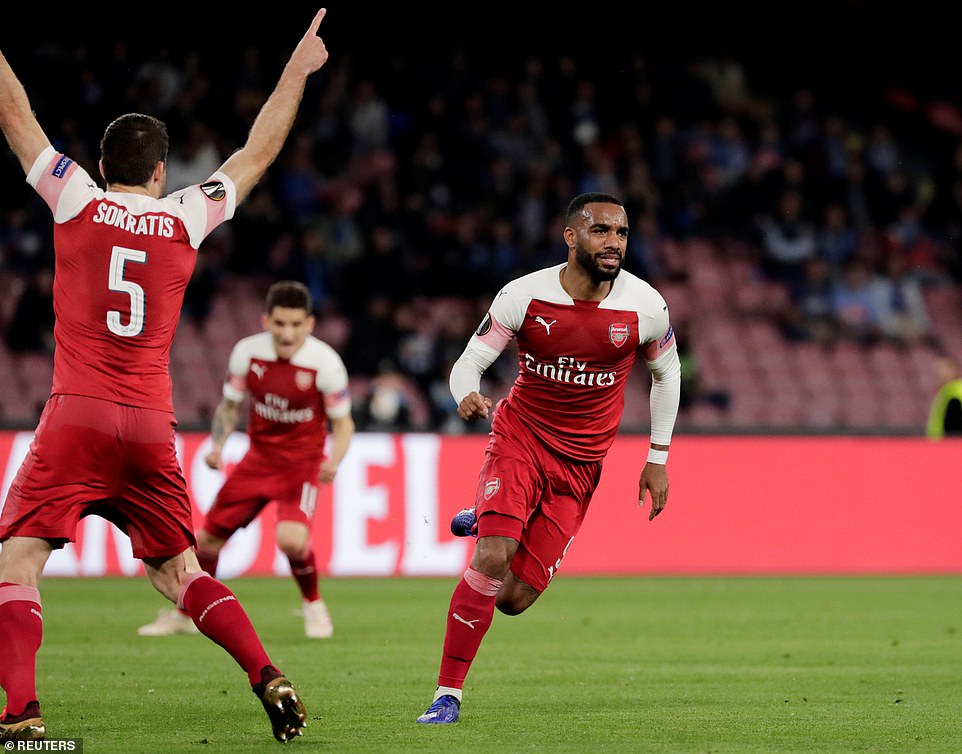 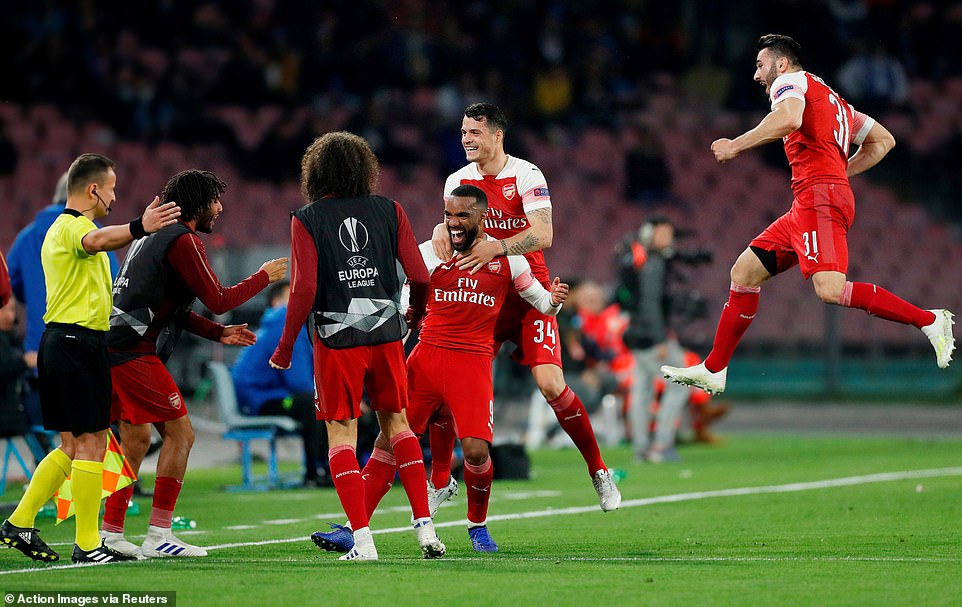 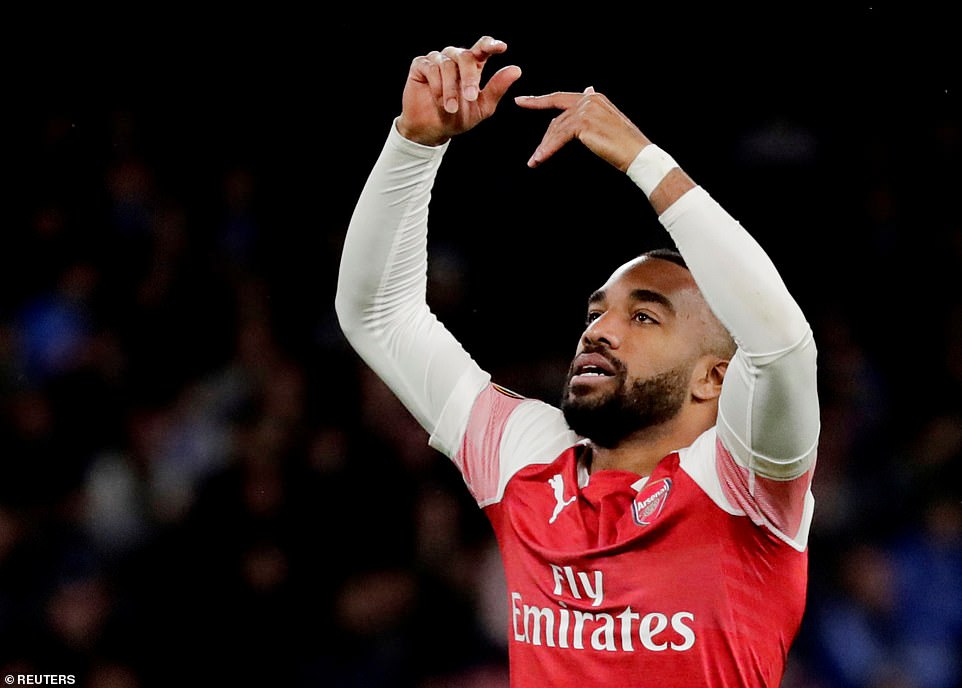 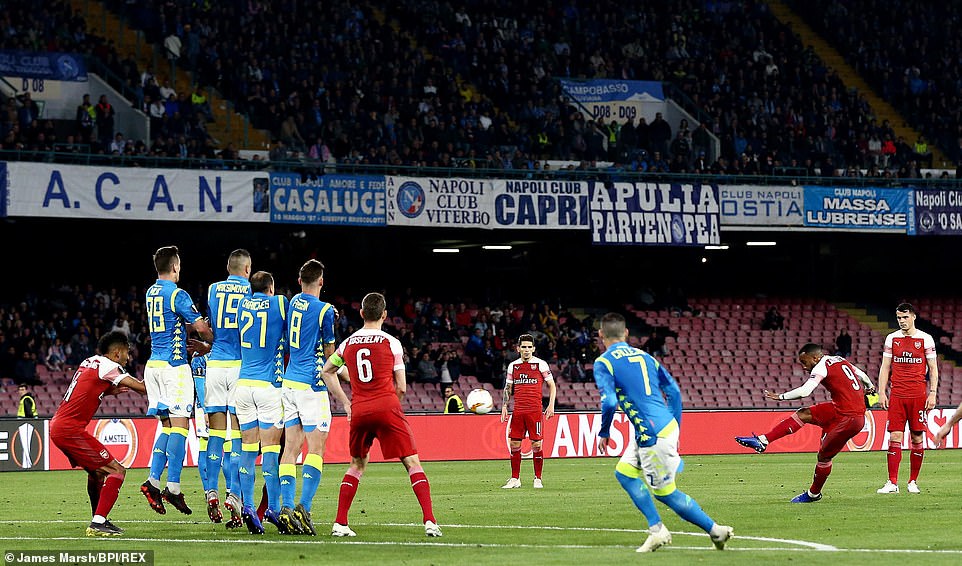 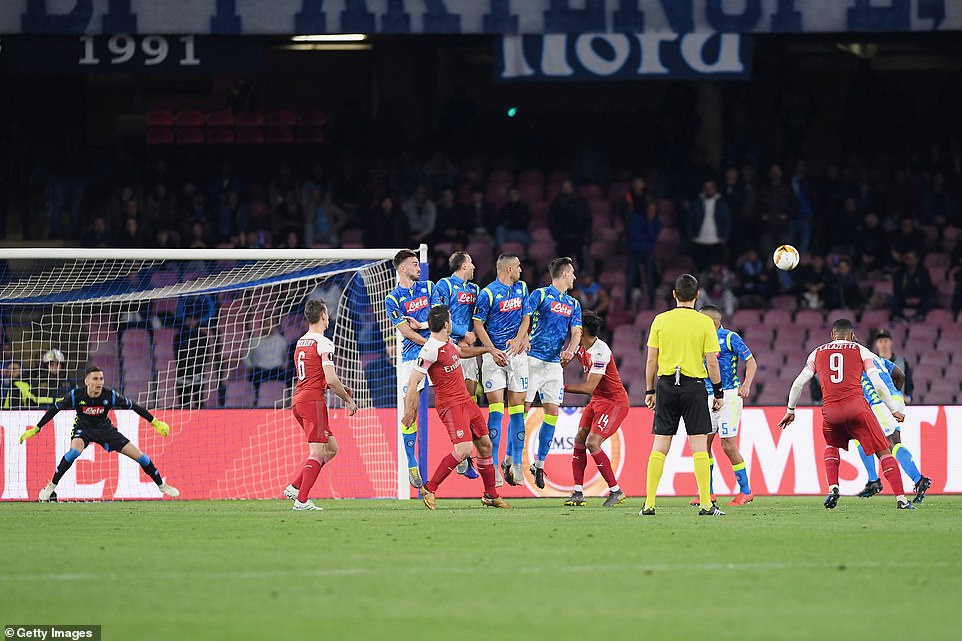 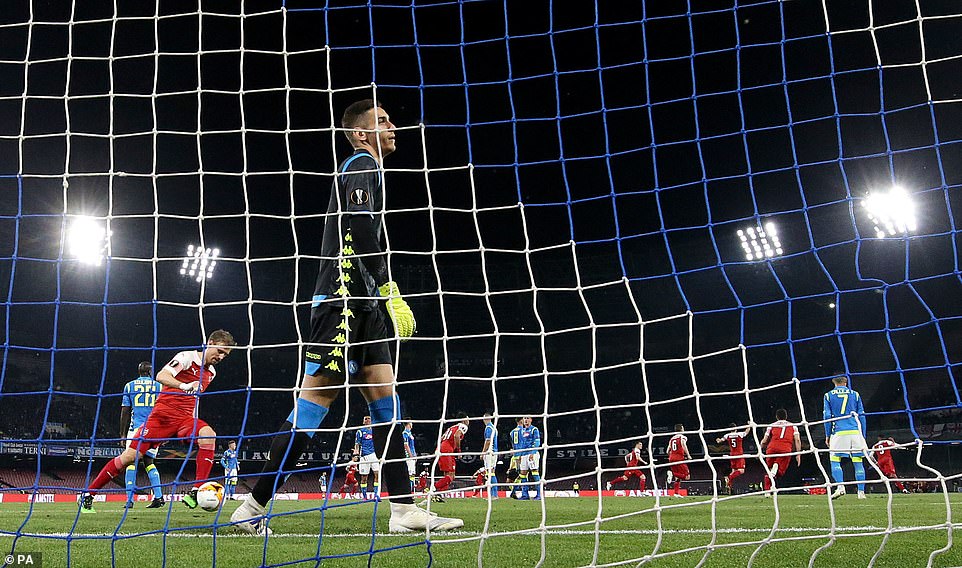 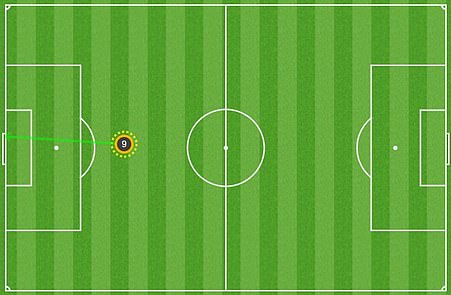 This is how Alexandre Lacazette delivered the knockout blow for Arsenal against Napoli during the second-leg of the Europa League quarter-final. CLICK HERE to find out more from our brilliant MATCH ZONE.

This was supposed to be far more excruciating than it turned out to be in one of European football’s most vociferous grounds.

The Stadio San Paolo was pulsating with noise before the start, by the end it resembled a morgue as Arsenal, with their chests puffed out, stood tall.

The Londoners will have left wondering what all the fuss was about as Alexandre Lacazette’s free kick capped what was largely a comfortable night for the Gunners.

Emery vowed to be bold during his pre-match press briefing, not that many believed him.

It’s why Arsenal are in significantly better shape than they were during those mediocre final seasons under the Frenchman – this win further underling the progress that has been made under his tutelage.

Credit to the Spaniard, his starting XI was daring and courageous – everything he’d promised to be 24 hours prior. 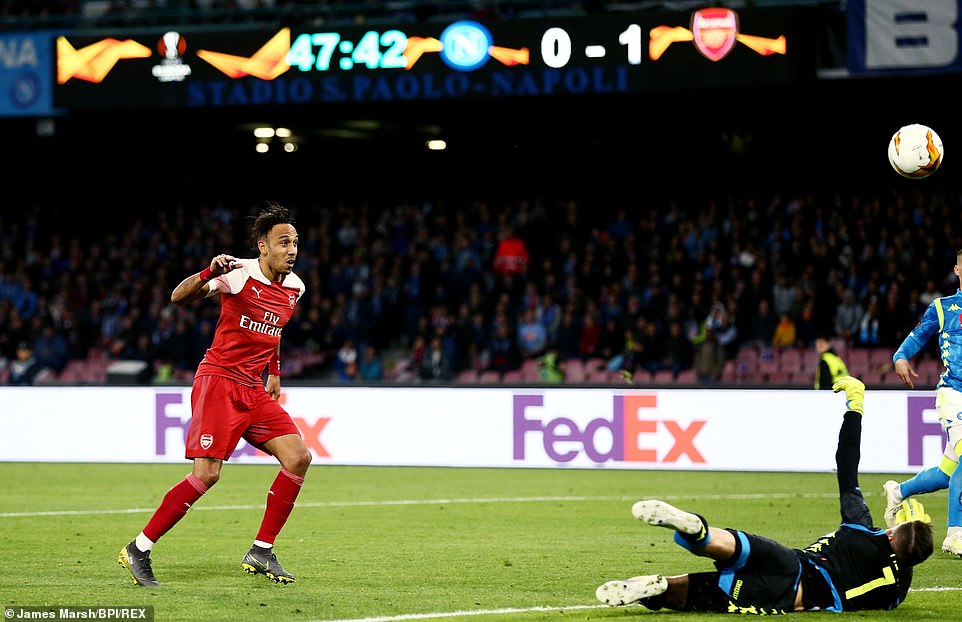 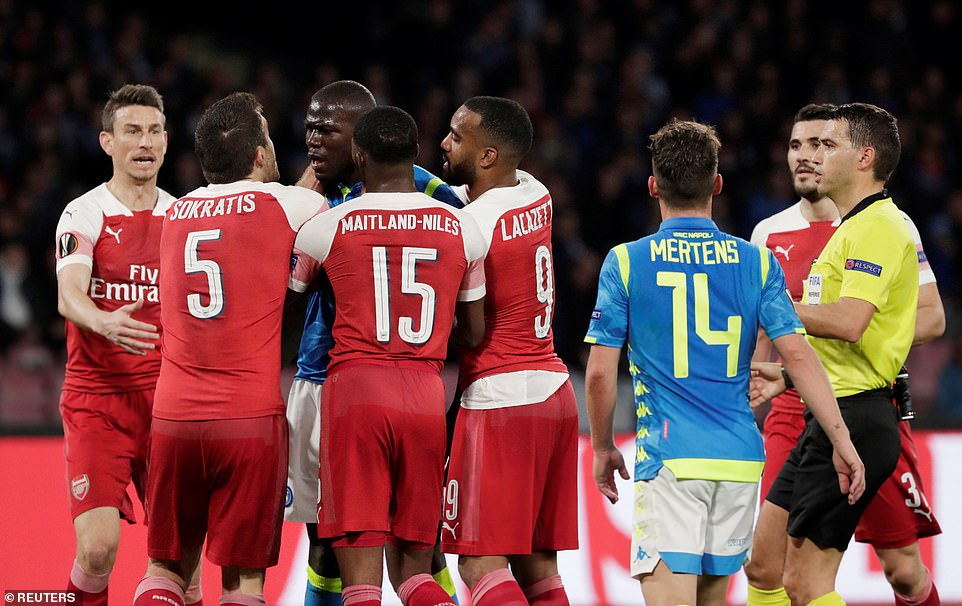 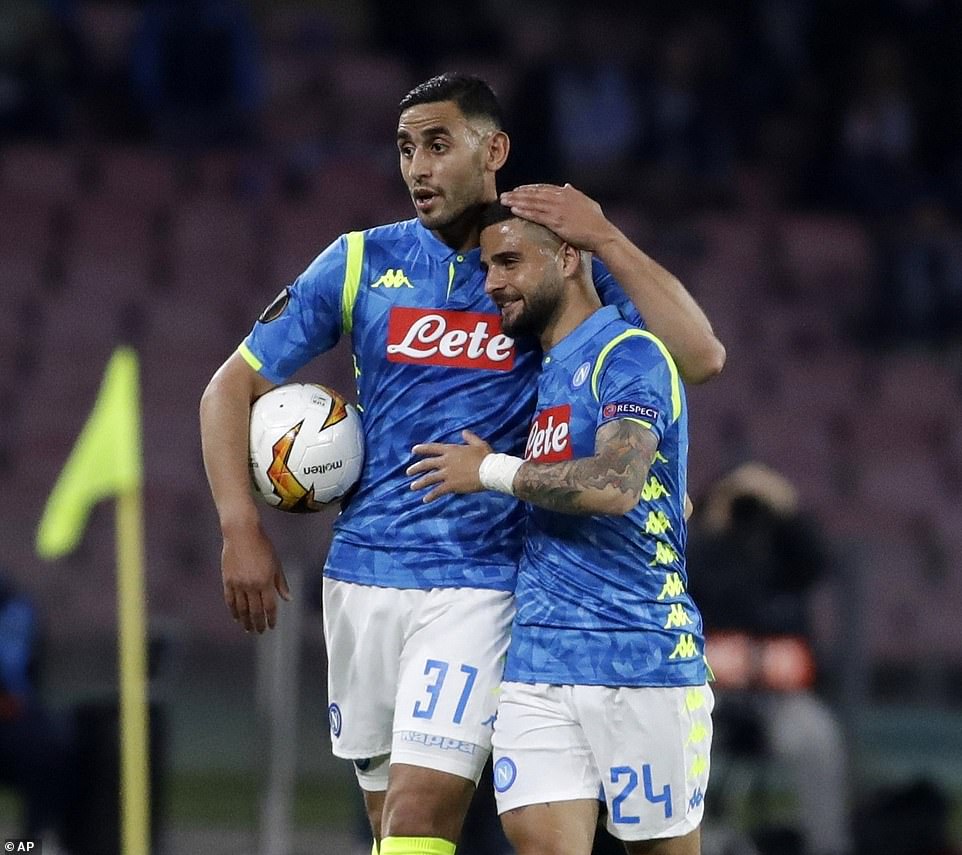 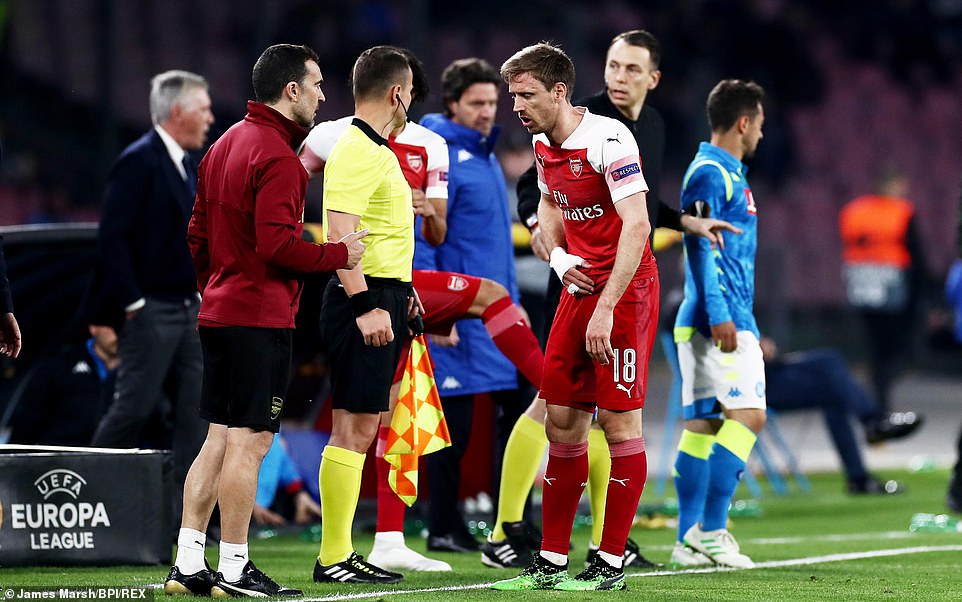 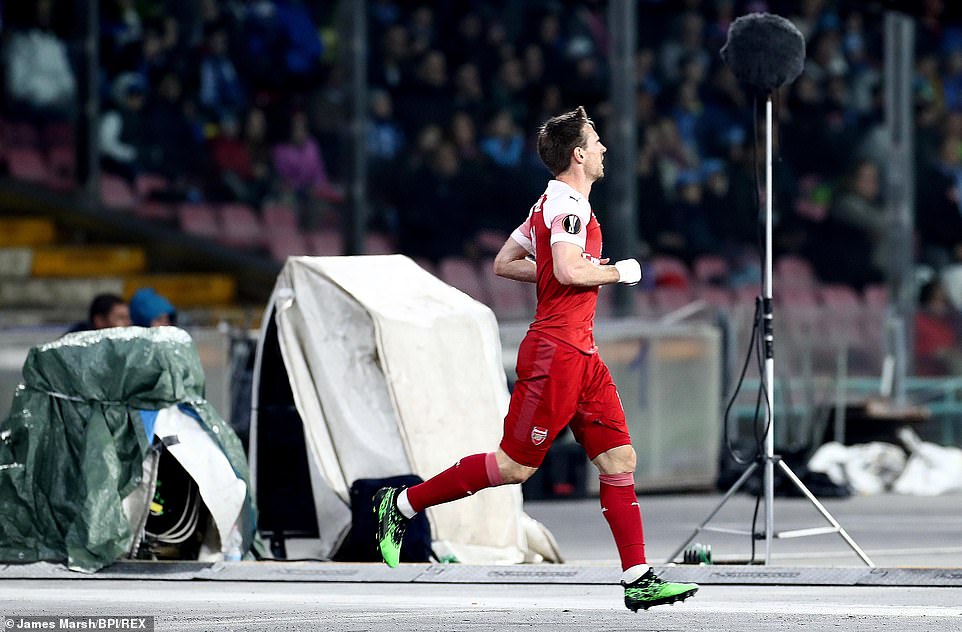 Fortune favours the brave, and so it proved here in Naples.

Truth be told, Arsenal should have put the tie out of Napoli’s reach during last week’s first leg.

Emery’s fear was that wastefulness would come home to roost last night, particularly given Arsenal’s difficulties on the road this season. He needn’t have worried.

Quietening the hostile home supporters during the early stages was No 1 on Arsenal’s to-do list last night.

The historic stadium, that’s housed illustrious names like Diego Maradona, Dino Zoff and Fabio Cannavaro, wasn’t full – yet the jeers for Petr Cech as he emerged for his warm-up, fully 45 minutes before kick-off, were deafening.

This wasn’t a night shaking violets. Emery was adamant his players wouldn’t crumble in this intense atmosphere, his players proved their manager correct during this performance, one of the best under Emery so far.

Had Lacazatte not dithered in front of goal in the 10th minute then they could easily have taken an early lead.

But the Gunners had Cech to thank for keeping their lead intact in the 17th minute, the keeper producing a point blank stop to deny Jose Callejon from close range following a rapid counter attack after Aubameyang lost possession.

The natives were irate, they knew opportunities like that had to taken after their defeat at the Emirates left them with little room for error.

They also realised that, for the most part, Arsenal were firmly in control of proceedings. 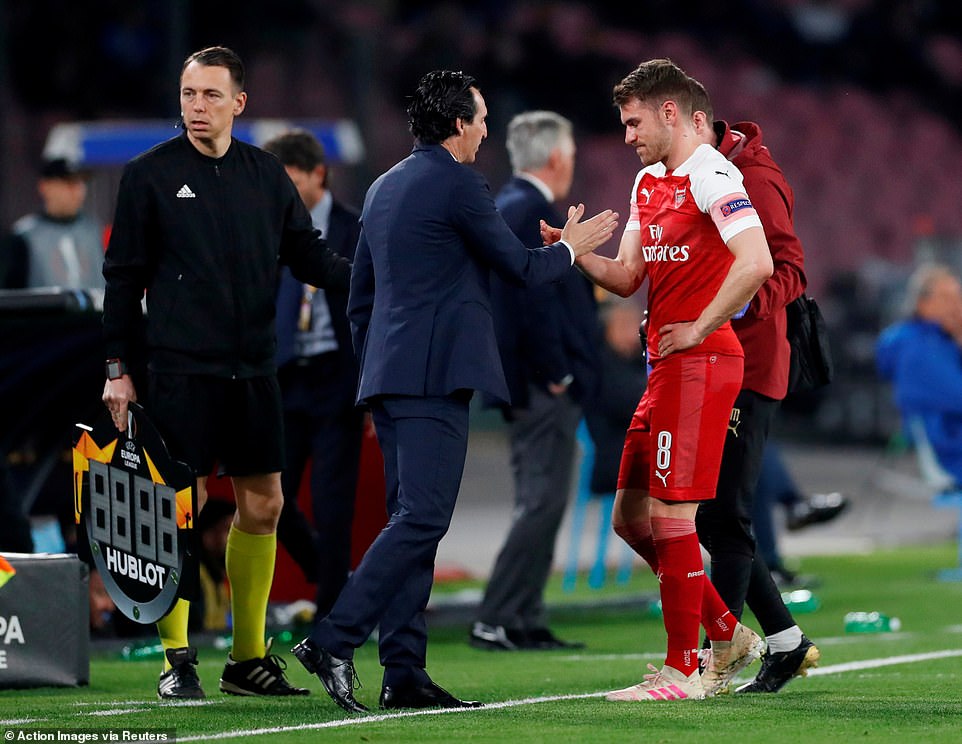 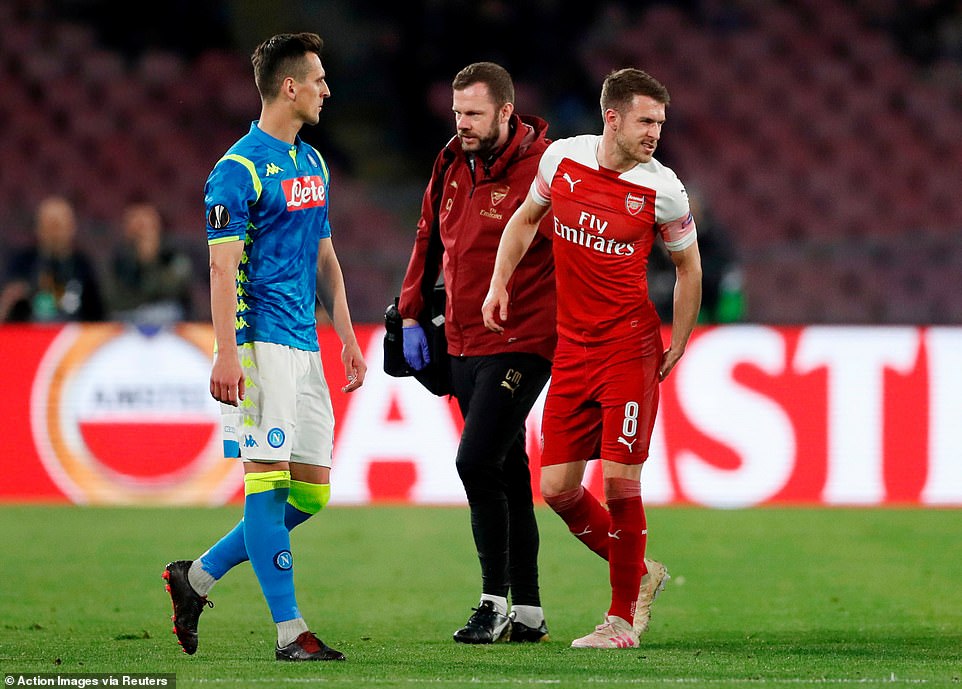 Ramsey, who is joining Juventus this summer after 11 years at Arsenal, touches his hamstring as he walks off the pitch 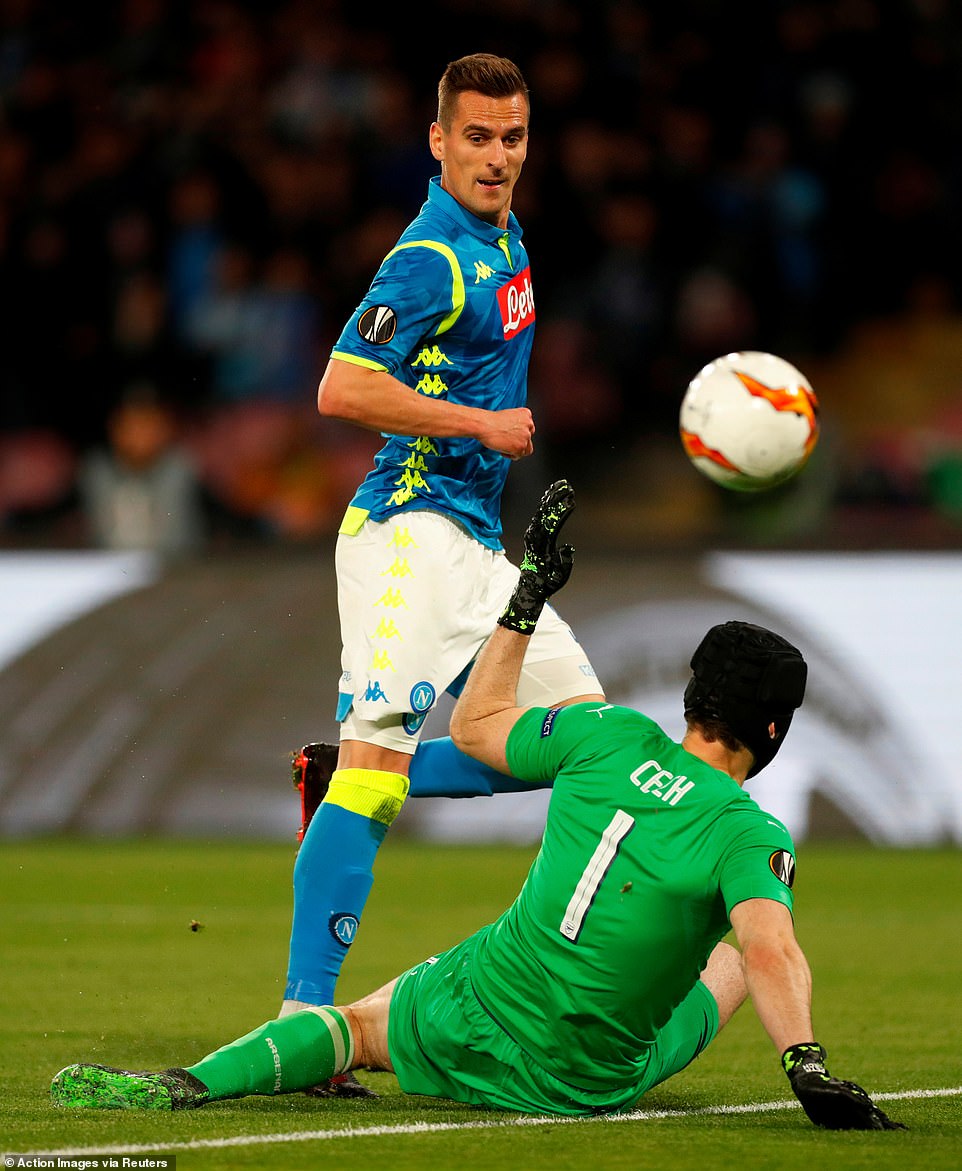 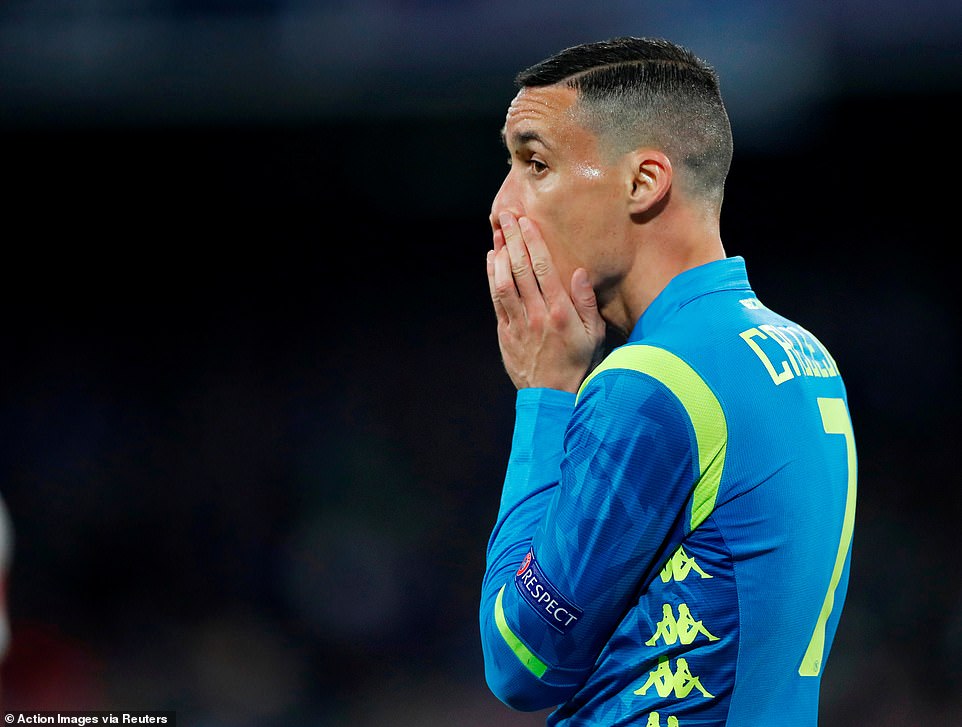 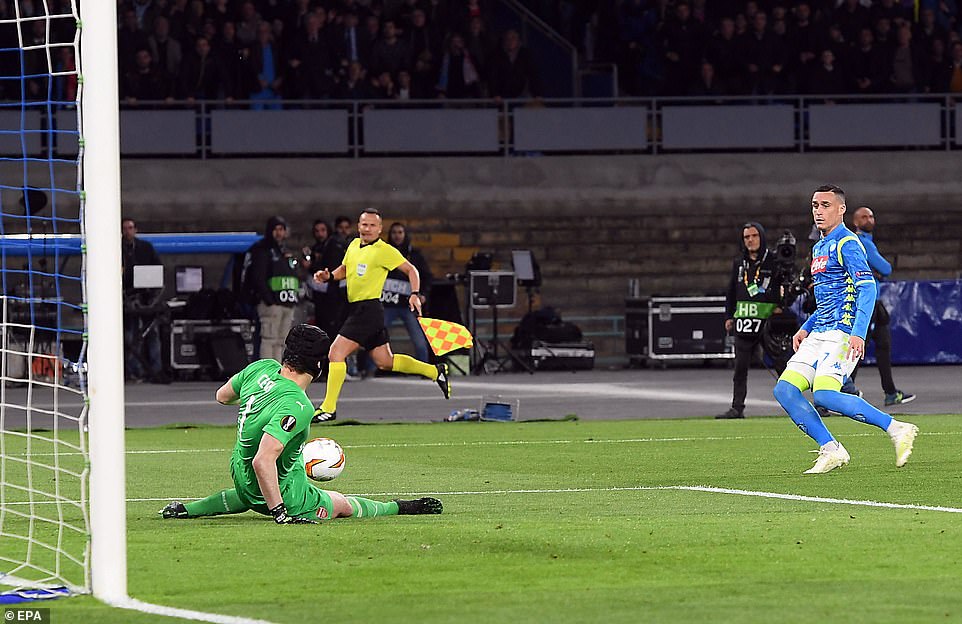 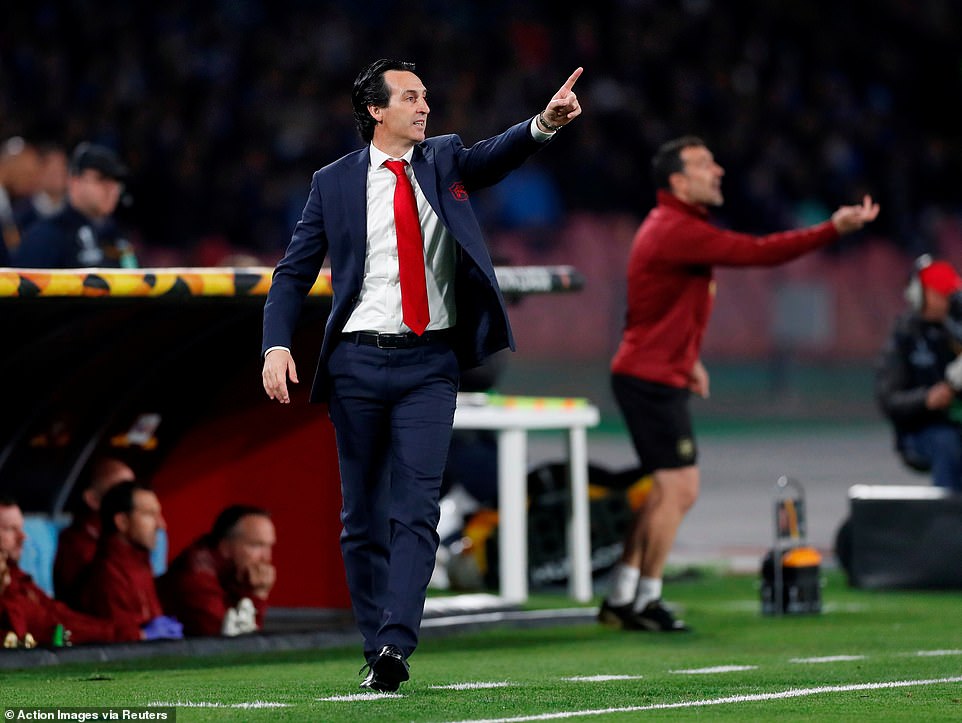 Arkadiusz Milik had the ball in the net in the 25th minute, delightfully lofting over the onrushing Cech, but the effort was ruled out for offside.

And, for a short while at least, it was a sign of things to come as Napoli threatened to turn the screw, Milik missing a glorious headed opportunity in the 28th minute.

But Arsenal knew opportunities would present themselves on the break as Napoli threw increasing caution to the wind, Aubameyang fired a flashing half volley straight at Alex Meret.

The Gunners were struck with a worrying injury blow in the 32nd minute, Aaron Ramsey limping off with what appeared to be a hamstring injury to be replaced by Henrikh Mkhitaryan.

With just four weeks to go until the end of the season, you have to wonder if we’ve seen the last of the Welshman in an Arsenal shirt as he prepares to join Juventus ahead of next season.

Moments later, though, the concern was replaced with feelings of intense jubilation as Arsenal extended their aggregate lead – and plundered the away goal they so desperately craved.

Lacazette will not have hit a cleaner free-kick in his life, he is unlikely ever to. Fully 30 yards out, his effort whizzed past Meret, who stood rooted to the ground. 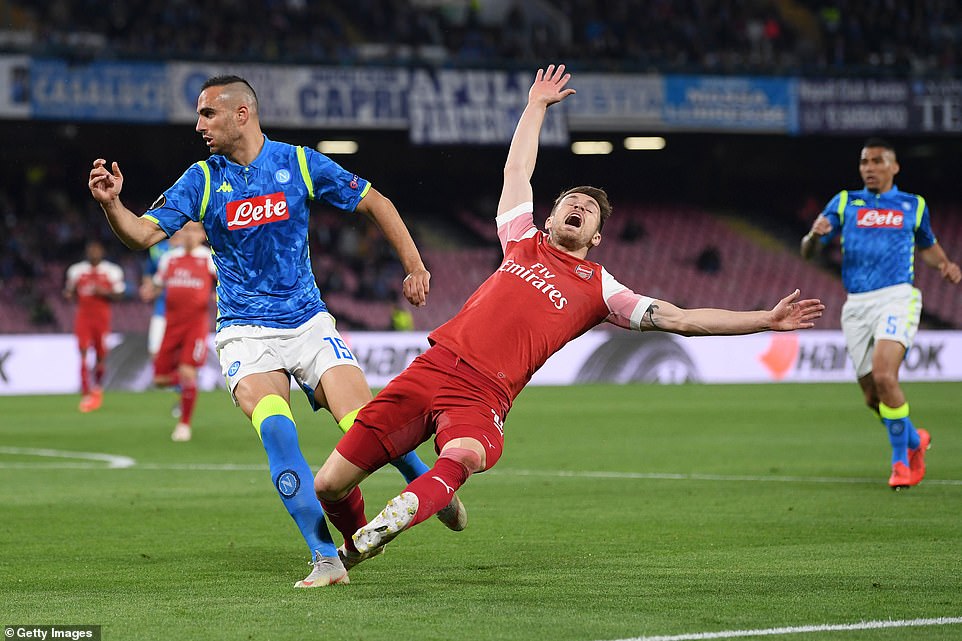 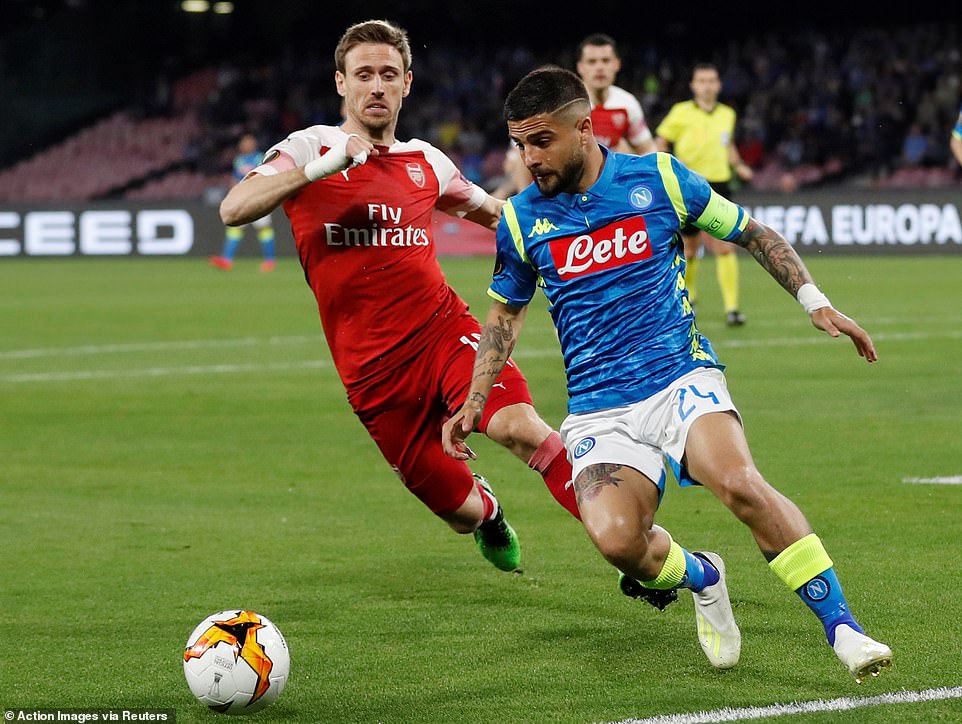 The Napoli keeper’s positioning was suspect while his feet looking like they were stuck in cement. Not that Lacazette or Emery gave two hoots about that. Arsenal were on their way to the semi-finals.

Napoli were furious they weren’t awarded a penalty when Aubameyang looked to have handled in the area just before the break, but replays looked to exonerate the Gunners striker.

But by this point Napoli were desperate, calling on Romanian referee Ovidiu Hategan to throw them a bone at every possible opportunity.

Carlo Ancelotti brought on Belgium forward Dries Mertens and deployed a gung-ho 4-2-4 system in search of the four goals that would see them through.

But it was Arsenal who should have extended their lead in the 48th minute, Meret producing an extraordinary stop to deny Aubameyang from close range.

Milik and Lorenzo Insigne missed good chances for Napoli, but by now they were merely going through the motions – they knew their fate.

Question is: what is Arsenal’s Europa League destiny? 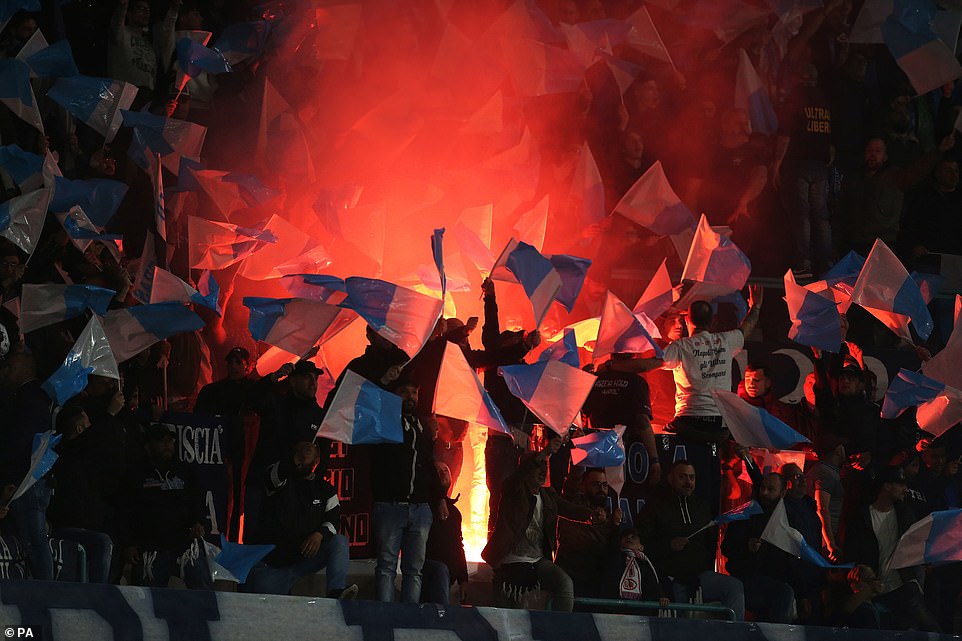 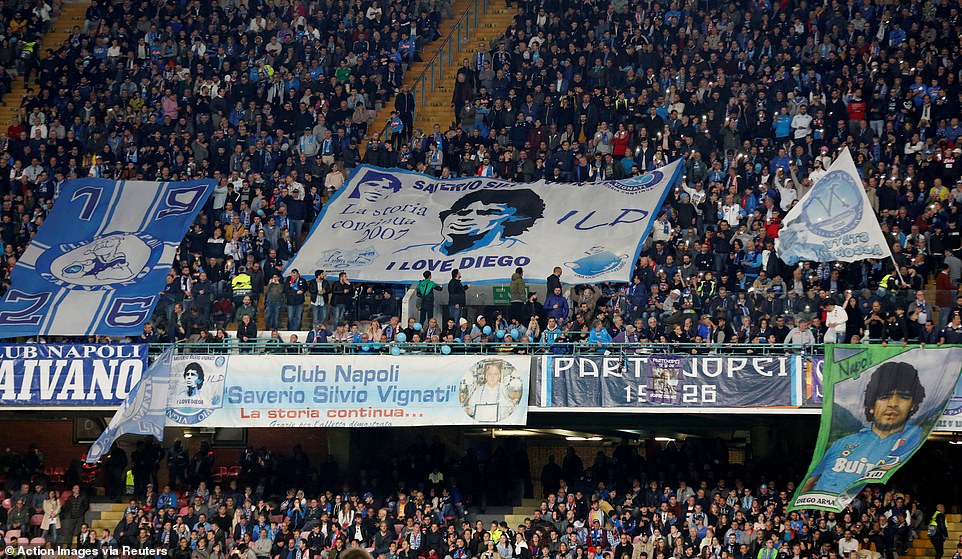 MARTIN SAMUEL: Scandal that 153 years counts for nothing with Swinton