It was around the dining table on Mothering Sunday that it dawned on Phil Neville how all-consuming a World Cup year is for the England manager.

To mark the special day, Neville had made a reservation at a restaurant in Manchester to treat his wife Julie, mum Jill, and mother-in-law Helen and wanted to spend time with them before a frantic 10 days in which his team will play Canada and Spain.

Before the starters were served, though, the guests realised their host was not going to be much company. 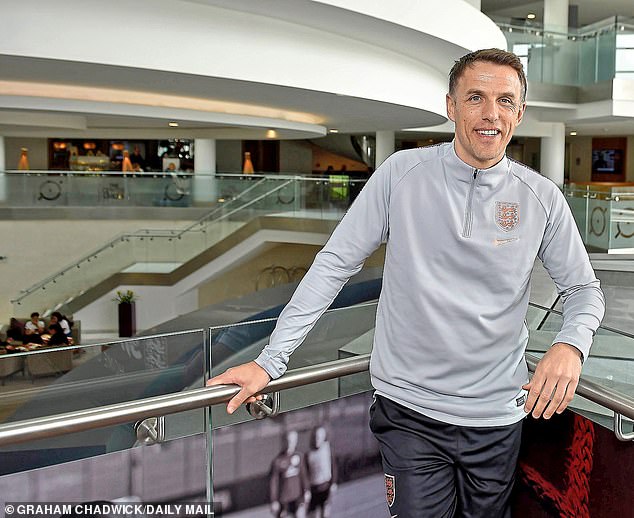 ‘We went out at 11.30am but Julie knew Arsenal were playing Birmingham at 12.30pm,’ Neville explains with a wry smile. ‘So there I am, watching it on my phone at the table. We ended up having to go home! I headed to St George’s later that afternoon after the FA sent a car for me.

‘On the way down, I had Man City v Liverpool and Chelsea v West Ham on Facebook. I got here and my phone rings. It was Julie. She was laughing and said: “You should have just gone at 11.30am! You’re no good to anyone!” My plan after this camp is to shut down. But I won’t be able to.’

With good reason. There are 65 days until England’s women begin their campaign to conquer the world against Scotland in Nice and Neville finds himself constantly thinking of ways to give his team an edge. This, after all, is a World Cup into which England can go deep.

That brings pressure and it brings scrutiny. Neville, 42, knows critics will judge him on what they see in France and not pay any attention to the work he has done in the 15 months since he was appointed.

His presence on the touchline has increased the profile of this team but it has also brought results, with England winning the SheBelieves Cup, the annual tournament staged in America, for the first time in February. He has reduced the age of the squad and improved the style of play. 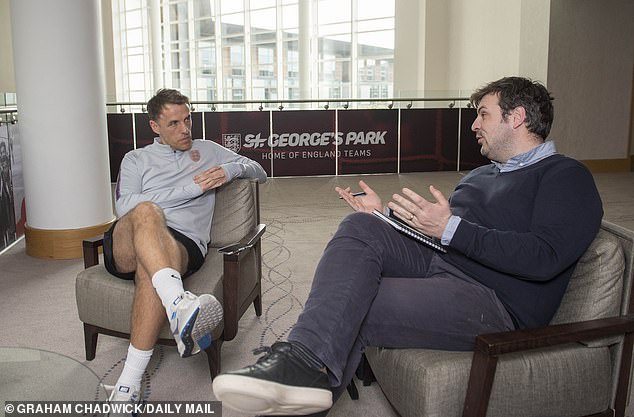 ‘From where I was 12 months ago to now, the women’s game is night and day,’ says Neville, who rates the 3-0 victory over Wales in Newport that secured World Cup qualification last August as his personal highlight so far.

‘There is a change in the respect I have got and how people perceive me. I don’t think it will be long before people start jumping across (from the men’s game) because of the facilities, the opportunity, the money. I go to places now and people are genuinely interested in what we are doing.

‘People see the quality. We have to capitalise on this boom before, during and after the World Cup. If we don’t it will be an absolute disgrace. We can take women’s football up to a level nobody ever dreamed — it’s that big a movement. I took the job because I thought it could be like this.’

There is no question how much Neville has immersed himself in the role. On the morning we meet at St George’s Park, he allows Sportsmail to observe a planning meeting for Friday’s friendly in Manchester against Canada.

His technical staff — Bev Priestman, Mark Mason, Geraint Twose, Alex Scott and Emma Allsop — joke when he leaves the room that Neville is ‘a nightmare’ at present, such is his attention to detail and the standards he expects, but the chemistry behind the scenes is clearly positive.

It has become a running joke in the camp about the WhatsApp groups he has set up to keep up to speed with his players, monitoring their performances and fitness, but it has helped create a bond.

At the same time Neville knows that in the next month he is going to shatter someone’s dreams and that is why the symbolism of a World Cup in France is not lost on him. He cannot think about France without reflecting on 1998. 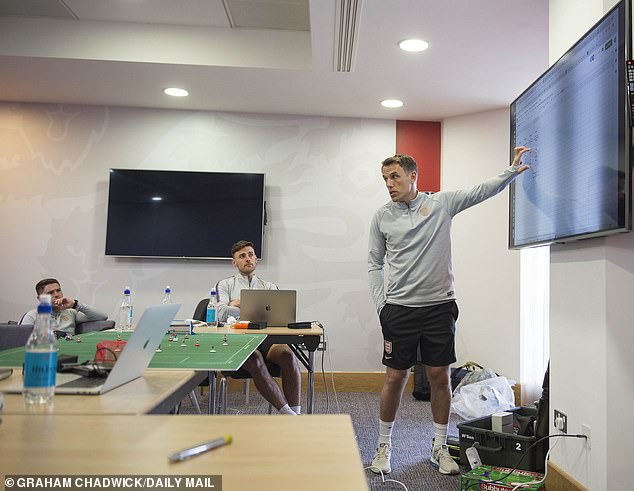 ‘We can take women’s football up to a level nobody ever dreamed,’ said manager Neville

Before our arrival, Neville held a welcome meeting for his group — as at the start of every camp — but he says the atmosphere changed the moment he mentioned there were some in the room who would not be on the plane in June.

‘In terms of experience, I am probably No 1 in England in terms of this,’ Neville says, his own tone changing. ‘I was left out of three World Cups (1998, 2002, 2006) and been told three different ways. France in 1998 was a hammer blow, the absolute worst. I have told the players the story.

‘Then I thought about it deeper and I was angrier with myself. He was only doing what he thought was best for his squad. To put it simply, I hadn’t played well enough to get in his squad It needed my dad to say: “Phil! Snap out of it! Look in the mirror.”

‘So how am I going to do it? I have my ideas. All I have said to them is “relax”. Whatever happens will happen. I have promised I will give them the respect of being told in the best possible way.’

There is, however, a major difference from his own experience and Neville is plainly aware of it. As much as he is encouraged by new sponsorship deals for the Women’s Soccer League, not playing for England has ramifications. 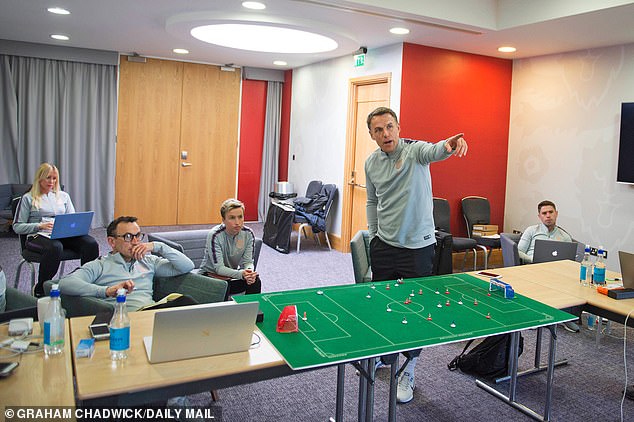 Neville has spoken to each of his players’ agents and learned how representing the country has opened any number of commercial opportunities to bolster their central contracts with the Football Association.

‘It is the things that come with playing for England,’ said Neville. ‘The off-the-field stuff, the sponsorships, the money. My players are now beginning to have good lives, earning well, good images.

‘Yes, they play for Arsenal, Manchester City, Chelsea but the thing that makes Sky or BT want them or commercial activities is the fact they play for England. So you aren’t just taking someone off the pitch — you are affecting their lives. It drains me. I have to be emotionally in charge.

‘These players are special people and you do get emotionally attached to them because they want to play for England.’

And he believes they can win for England. That word — win — was on the first slide he showed to the squad in his first presentation when he took charge and the closer they get to France, the more he will be drumming it into them. This, he recognises, is the opportunity of a lifetime.

‘We are going to go for it,’ he says, before leaving for another meeting. ‘We are not going to go to a World Cup and freeze. My hope is that they go to the World Cup as one of the freshest squads ever.

‘And if we do that? We have got an unbelievable chance.’ 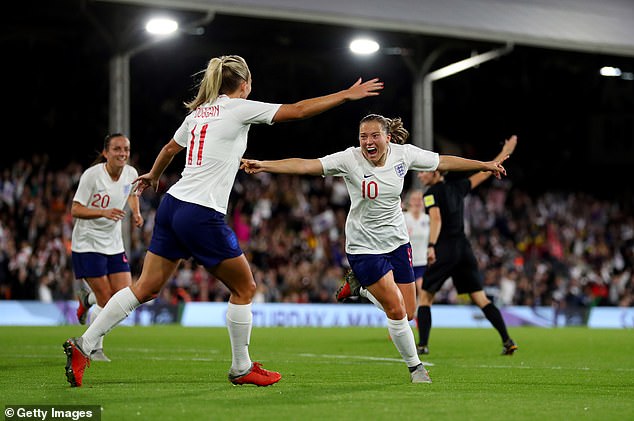 England are fourth favourites for this summer’s World Cup, behind France, USA and Germany