A defeat that dents their hopes of finishing in the top-four owed much to another disjointed performance little better than the one Solskjaer described as the worst of his time in charge. The Norwegian has now lost three of his last four games.

But great credit must go again to Wolves for another vibrant performance to beat United twice in the same season for the first time since 1980. They have now taken 13 points of the Big Six teams, more than any other club outside that bracket, and go into Sunday’s FA Cup semi-final against Watford in buoyant mood. 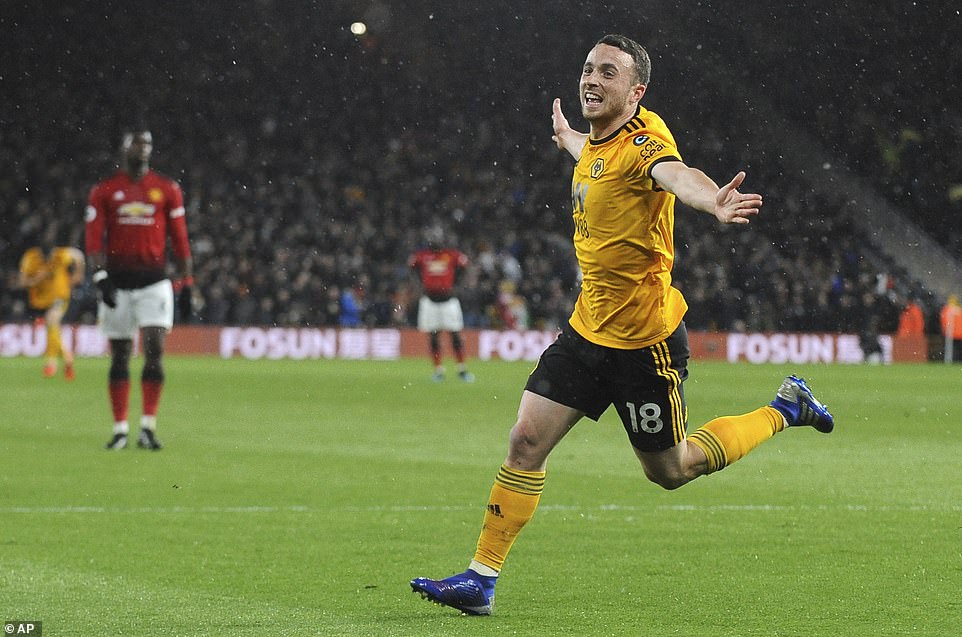 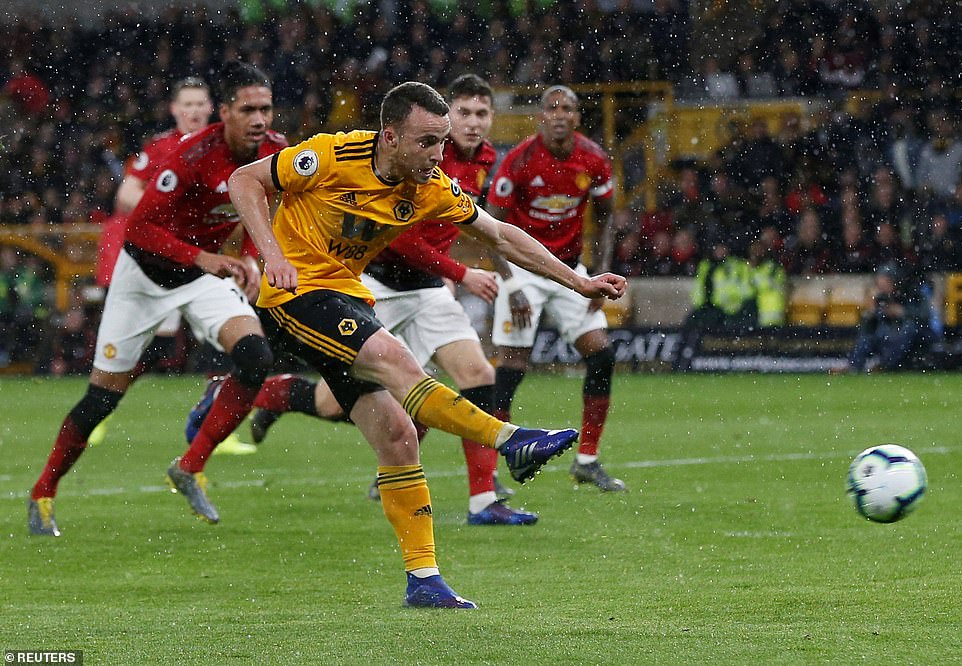 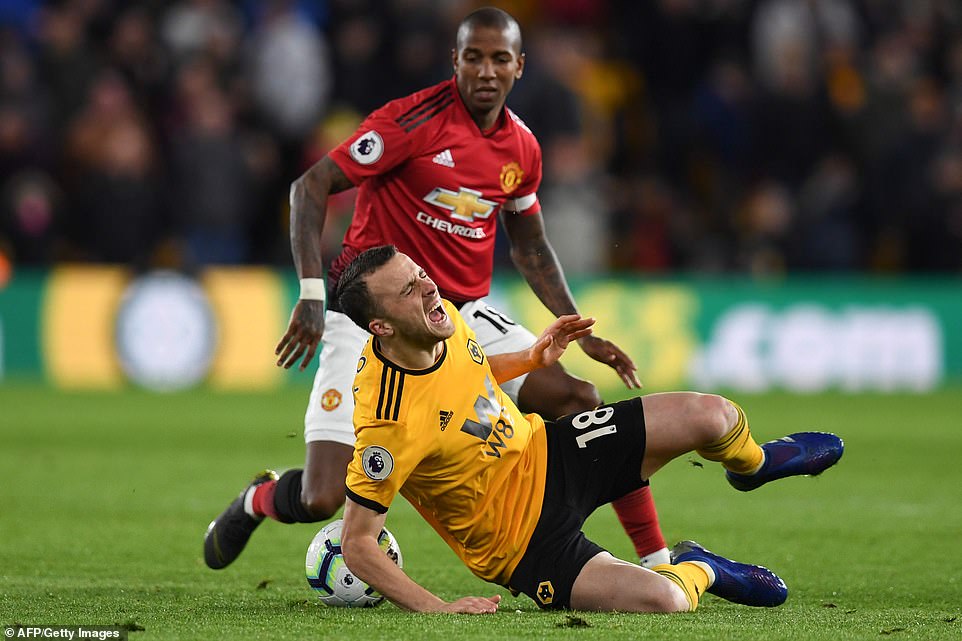 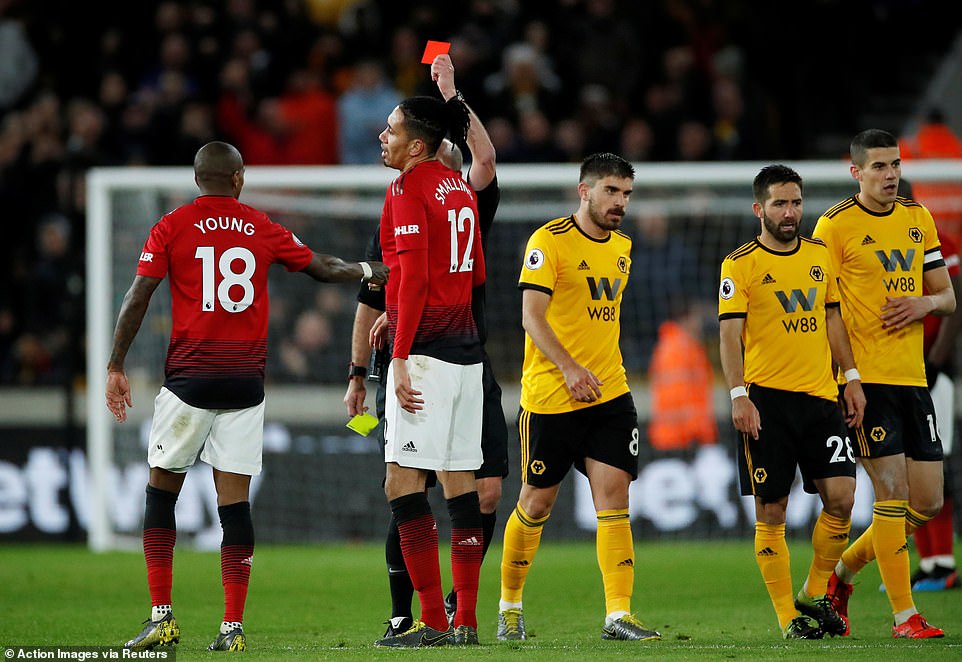 The veteran defender, deployed at centre back, rashly went in on Jota as Mike Dean gave his 100th Premier League red card 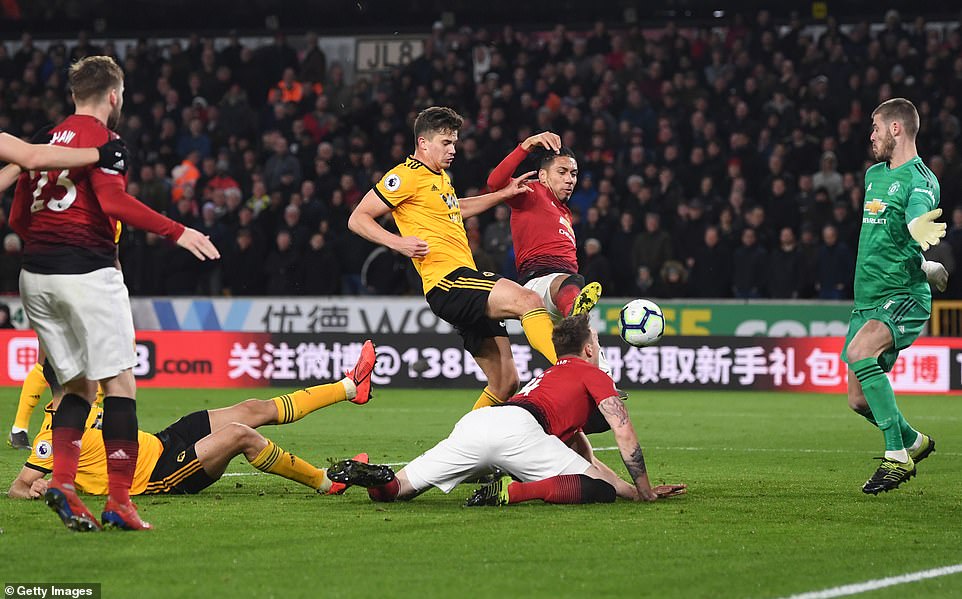 United’s cause was not helped by the deserved sending-off of captain Ashley Young just before the hour mark but a display that started so well and dipped so badly was summed up by the two goals they conceded.

The winner in the 77th minute started with Joao Moutinho on the left who swung in a cross towards the penalty spot.

Raul Jimenez beat substitute Phil Jones to it and headed downwards. Leander Dendoncker swung at the ball and missed but Chris Smalling got in David de Gea’s way and then handballed the ball into his own goal as he fell over. 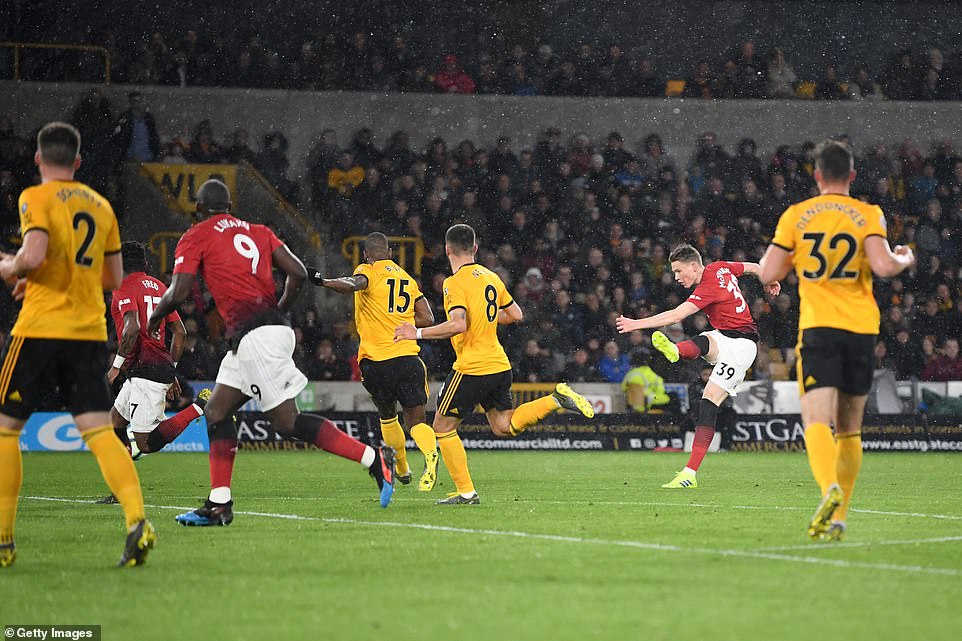 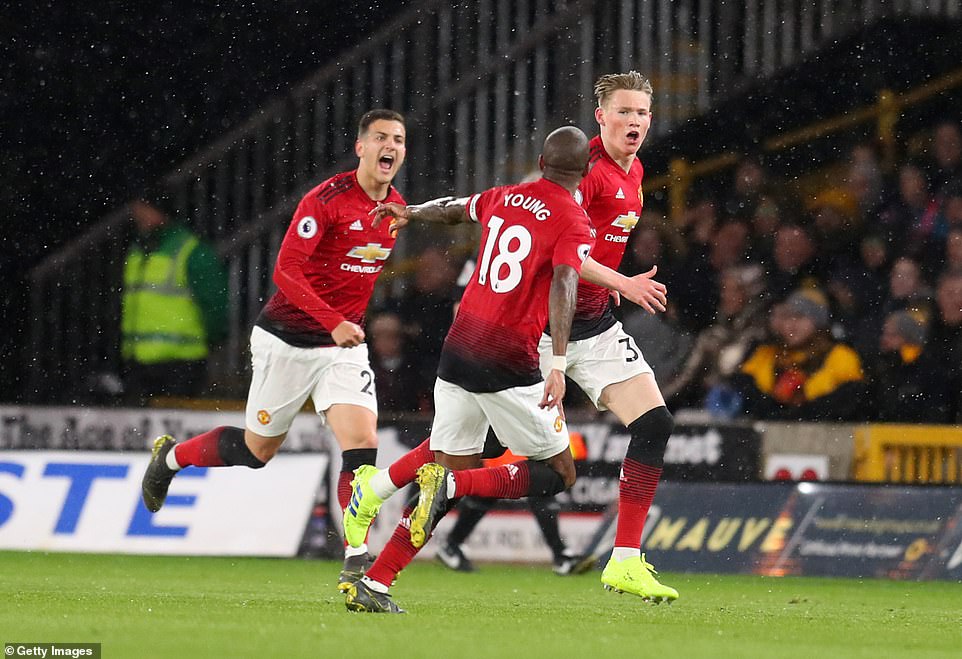 Wheeling off in celebration, the central midfielder raced towards the bench as he revelled in the occasion of getting a goal 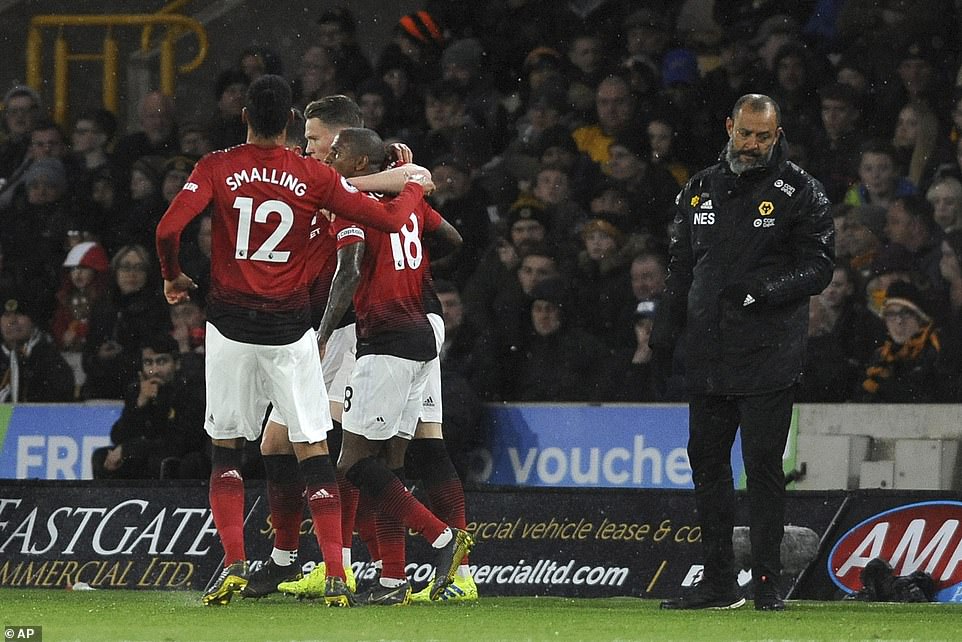 While United started strongly and were flying high early on, the tide soon turned and it quickly became a very tough match 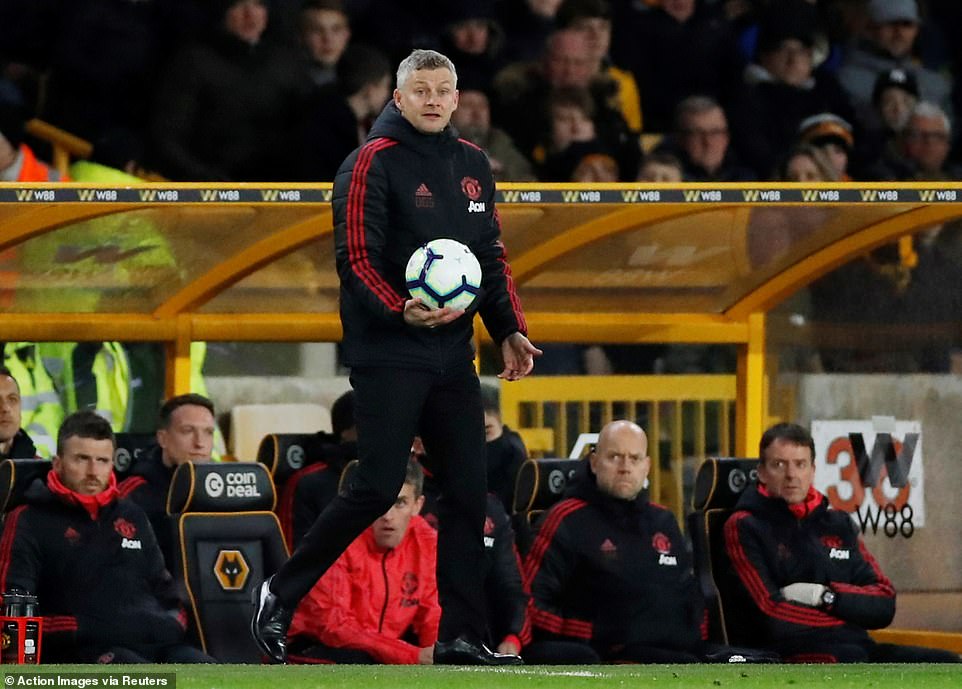 United returned to Molineux 17 days after their worst performance under Solskjaer and a fully deserved FA Cup exit.

Wolves’s reward was a date at Wembley on Sunday but any suggestions Nuno Espirito Santo might be tempted to put out a weakened team were dispelled an hour before kick-off.

He made four changes from Saturday’s defeat at Burnley, but this was arguably his strongest line-up with the exception of young full-back Ruben Vinagre.

Solskjaer made six changes from the team that completed a rather unconvincing win over Watford, at least one of which was enforced following Marcus Rashford’s late withdrawal.

Ander Herrera’s absence was put down to injury rather than anything to do with his contract impasse, while Nemanja Matic, Juan Mata and Anthony Martial were dropped to the bench and Phil Jones made way for the return of Victor Lindelof. 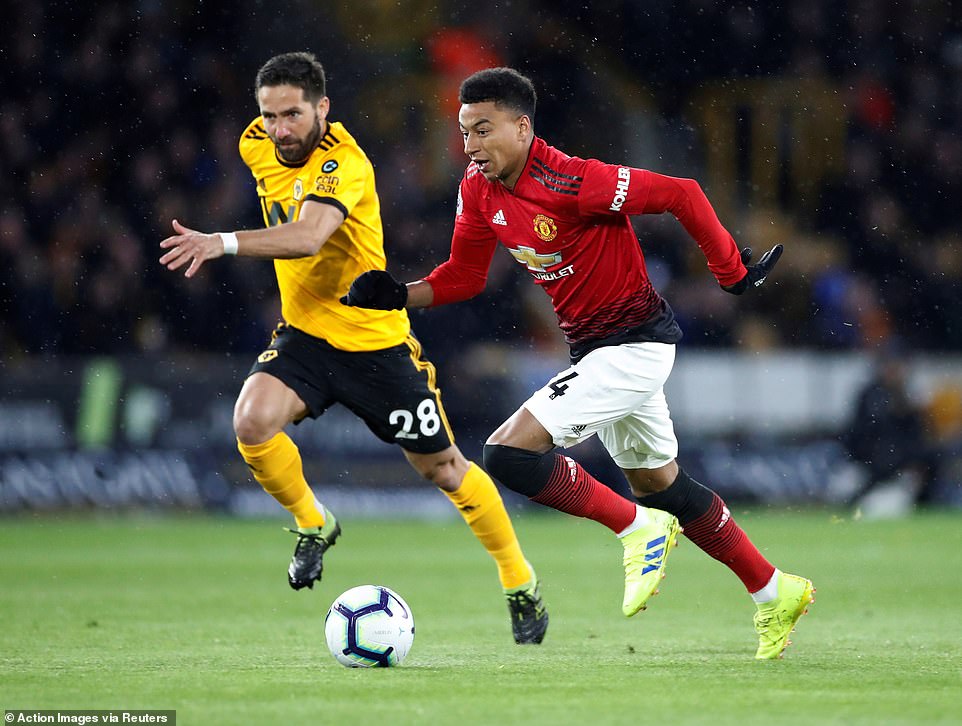 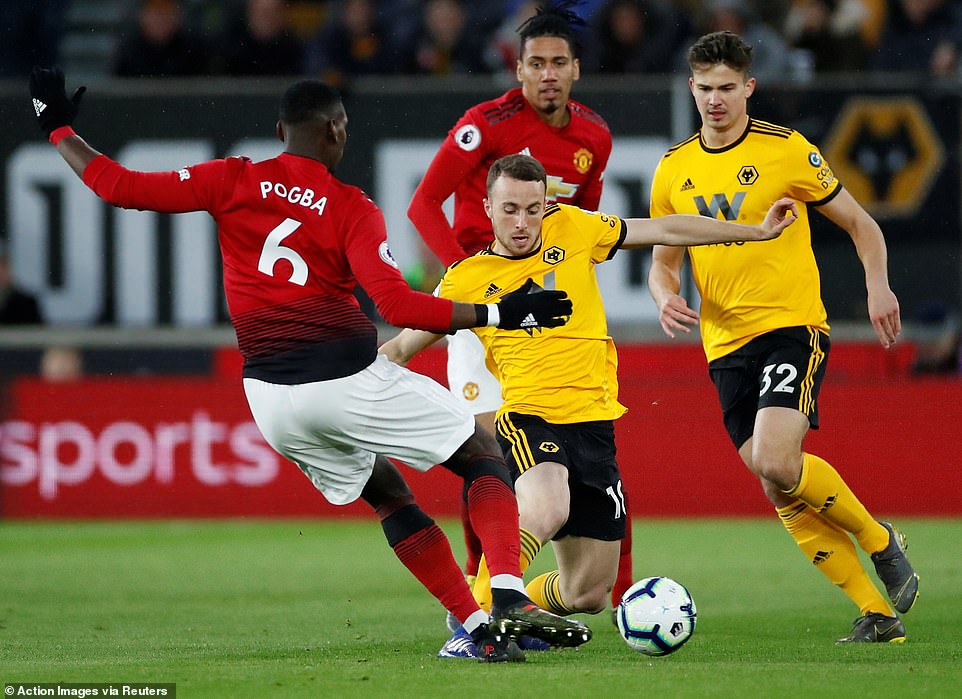 Jota, buoyed by the goal he scored against United in the FA Cup win recently, looked to wrestle back control in central areas 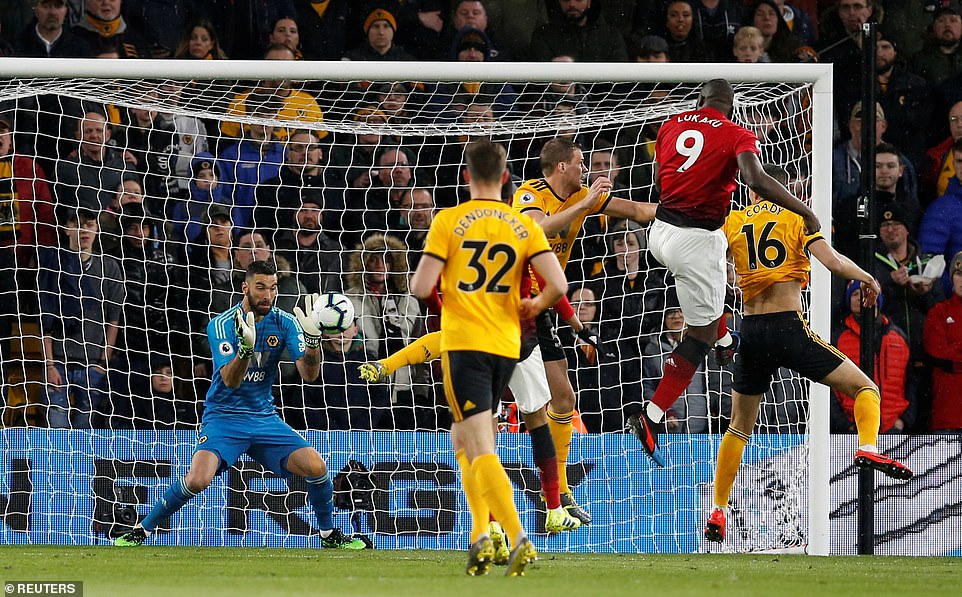 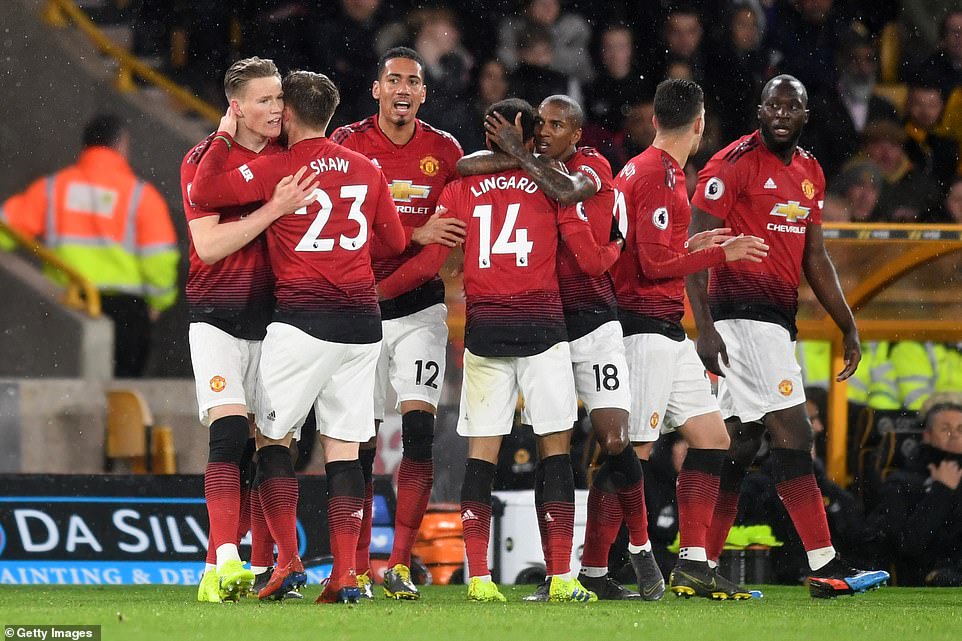 It took United 13 minutes to take the lead in the teeming rain that played its part in Scott McTominay’s first senior goal.

Jesse Lingard had possession on the left and played the ball infield to Fred who laid into the McTominay’s path. The young midfield took a touch and then drilled a shot from 25 yards which flew through the legs of Willy Boly and skidded off the wet turf beyond Rui Patricio into the bottom corner.

It was no more than United deserved after a bright opening in which Romelu Lukaku headed straight at the keeper from Diogo Dalot’s excellent cross.

Lingard also had a clear chance to extend United’s lead when Lukaku lifted a lovely pass to him in a similar position in front of goal, but Patricio guessed the right way and turned his header around the post.

At that stage, Wolves looked every bit a team distracted by their upcoming trip to Wembley, but that all changed midway through the half. 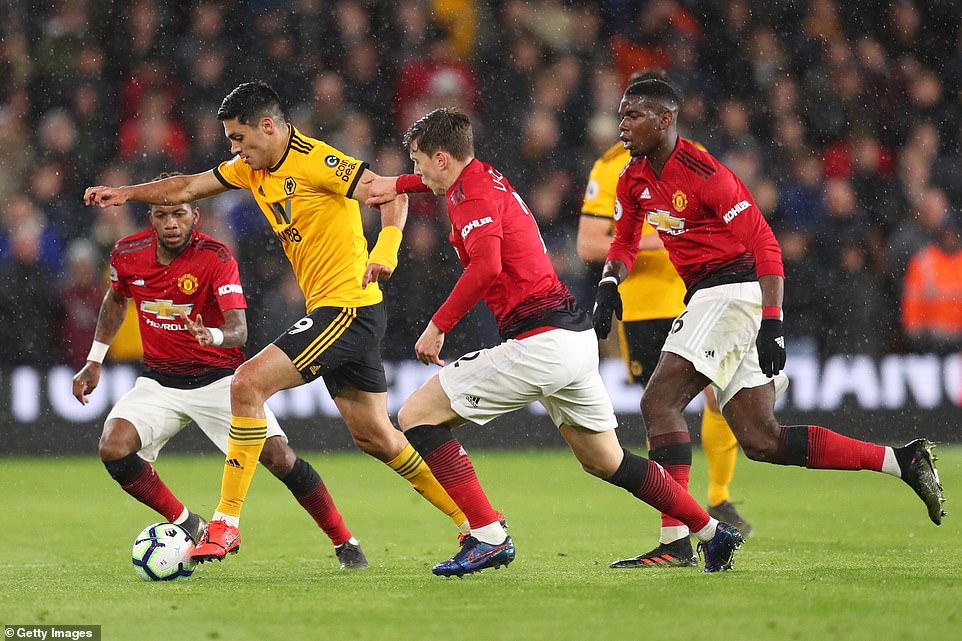 With the rain making it a very quick surface, attackers fancied their chances as Raul Jimenez looked to race Victor Lindelof 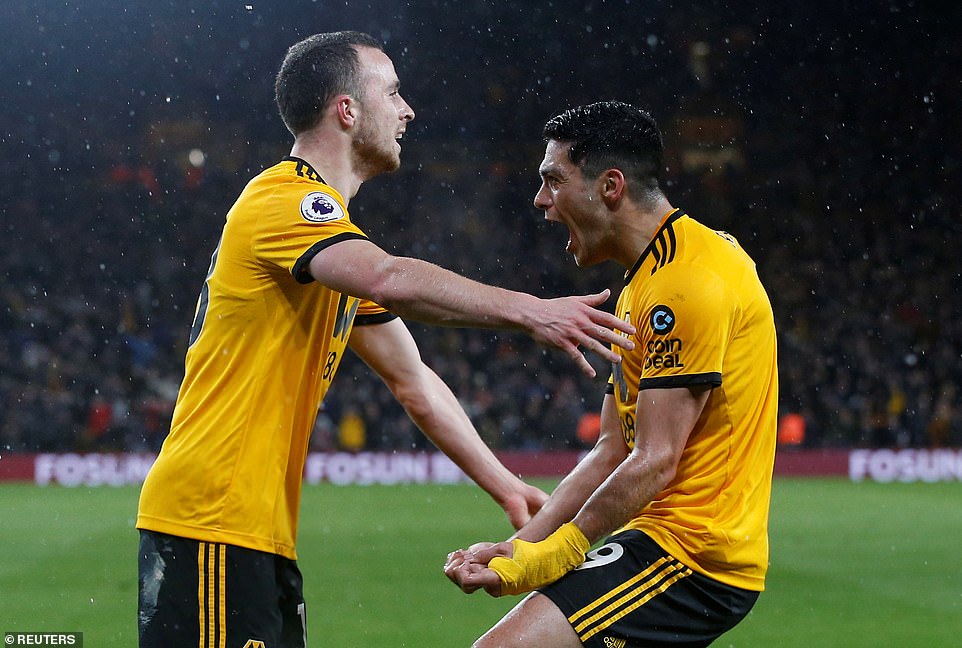 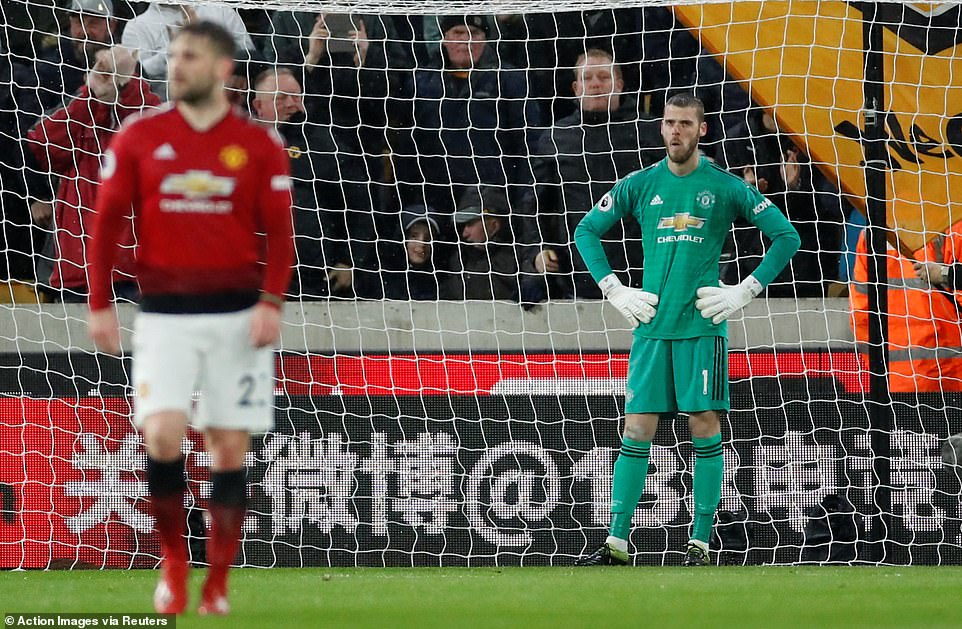 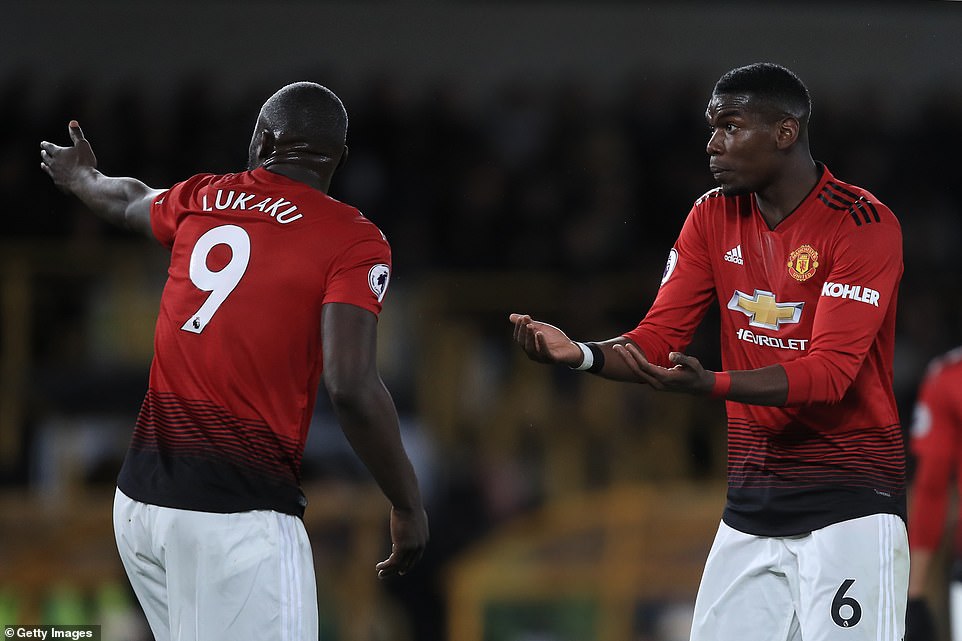 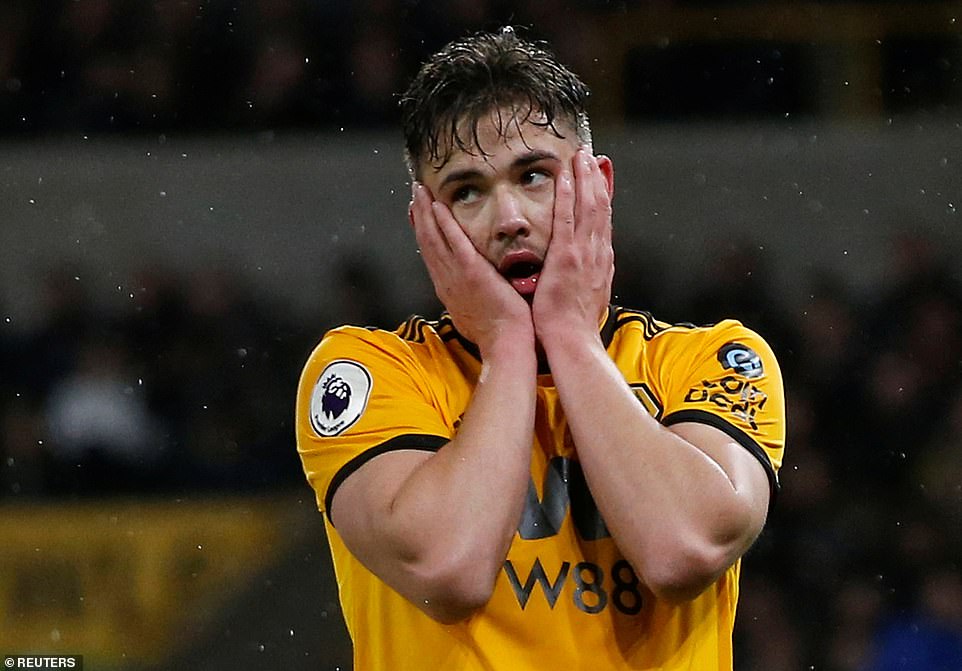 Now on top in the game, Wolves were left exasperated at not taking the lead when Leander Dendonker blazed over the bar

No sooner had Raul Jimenez hammered their first chance over the bar after he was set up by Vinagre and Boly than the home team snatched an equaliser.

It owed much to United’s mistakes and the frailty of an unfamiliar back-five with Ashley Young operating in a more central role.

David de Gea played a goal kick out to Fred who didn’t appear to want it very much in such an isolated position. Joao Moutinho sensed the opportunity and tackled the Brazilian, turning possession over to Leander Dendoncker. He played the ball to Jimenez who slipped it to Diogo Jota and he through on goal thanks to Young’s clumsy attempt to play offside.

The Portuguese striker took one touch and stroked a shot past De Gea for his sixth goal in the last seven league games here.

All of a sudden Wolves were in full flow and United were looking vulnerable. Dendoncker and Ruben Neves went close before the interval, although Wolves were fortunate that Lukaku’s low effort in added time did not roll the other side of the far post. 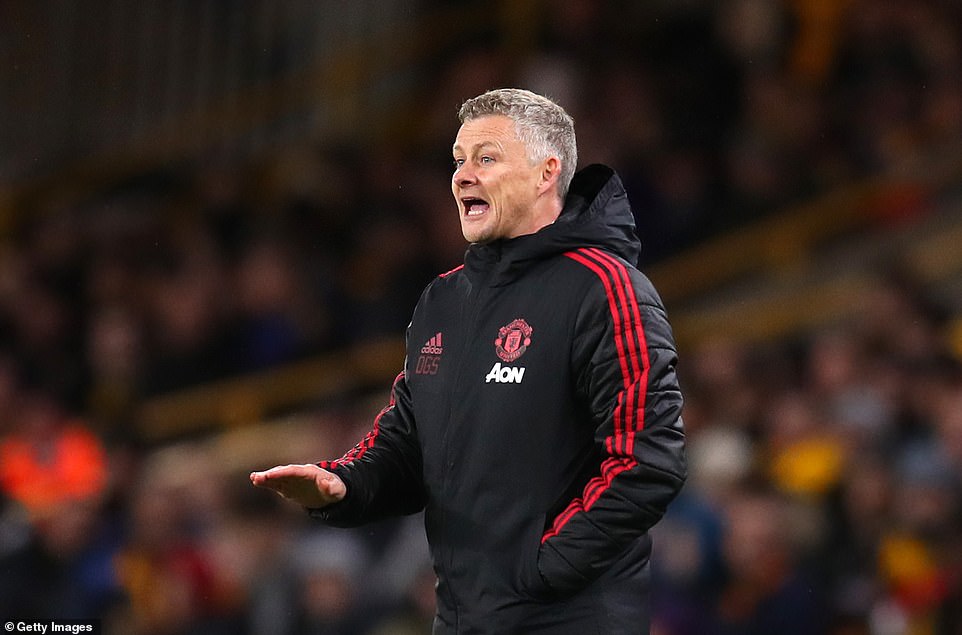 Solskjaer, now permanent boss of United, looked to calm his players down as they saw their early dominance disappear 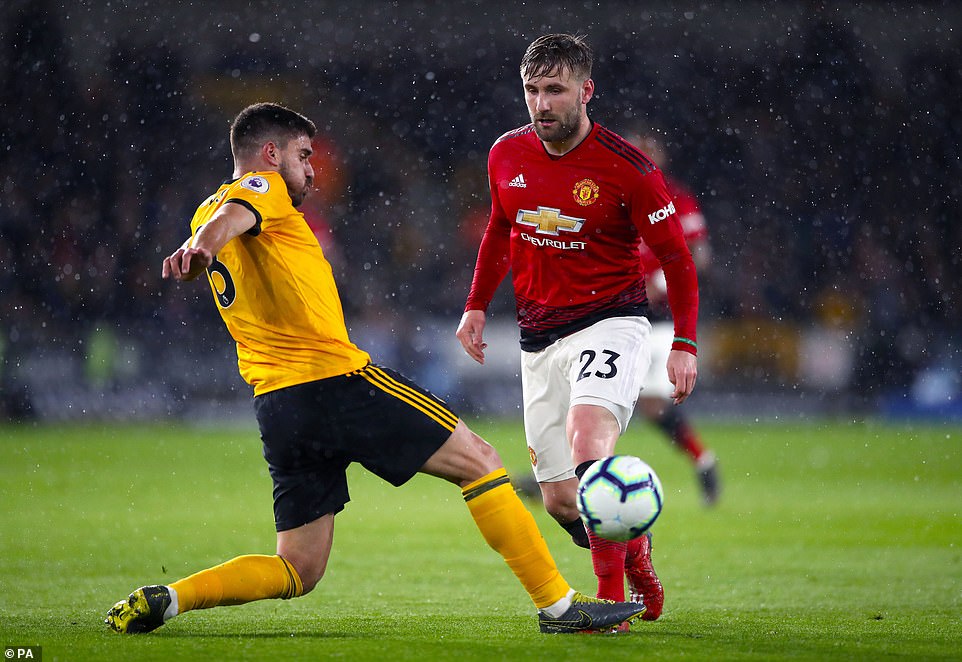 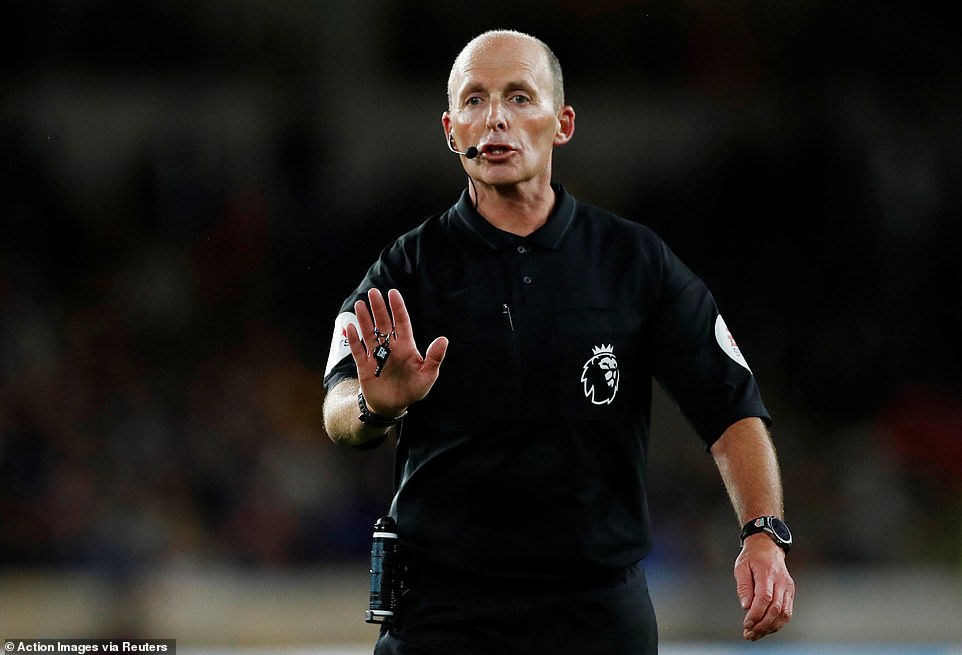 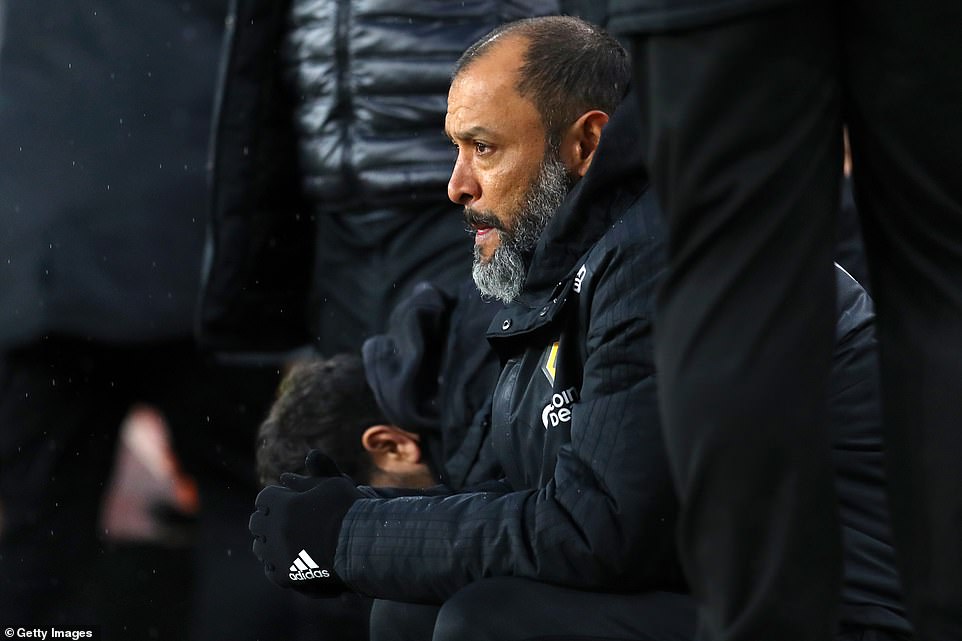 Aside from the equaliser, when emotions ran wild, Wolves boss Nuno Espirito Santo was a calm figure throughout the game 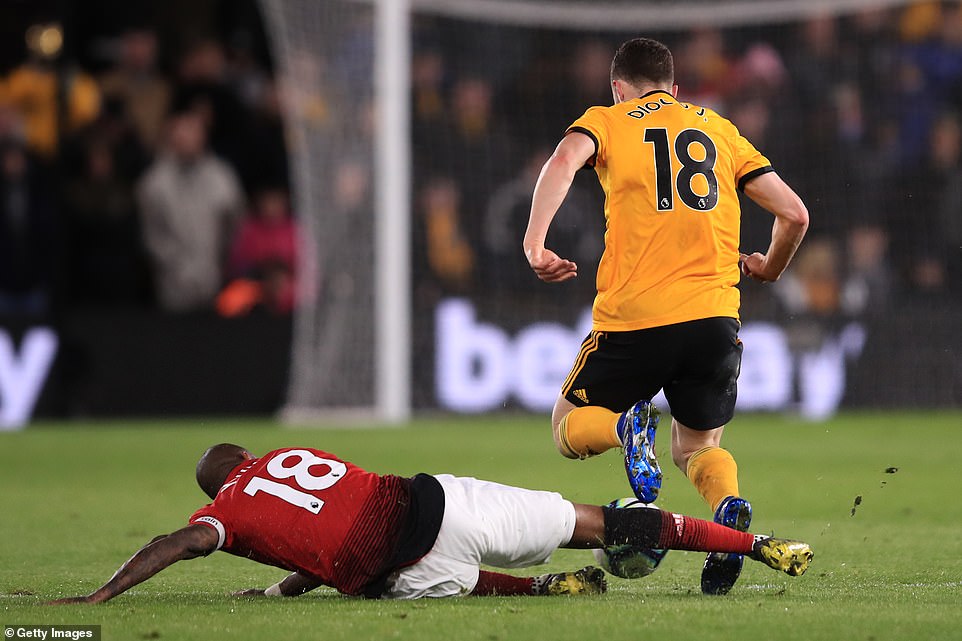 All of a sudden Wolves were in full flow and United were looking vulnerable.

Dendoncker and Ruben Neves went close before the interval, although Wolves were fortunate that Lukaku’s low effort in added time did not roll the other side of the far post and Patricio made a fine one-handed save to deny McTominay a second goal shortly after the restart.

Shaw and Dalot were both booked towards the end of the half as United struggled to contain Wolves, and Young was next into Mike Riley’s notebook for a foul on Jota.

His second caution – and the 100th Premier League red card of Riley’s career – was not far behind when McTominay played Young into trouble with a misplaced return pass just before the hour mark, and his attempt to stop Jota taking advantage by felling the striker with a lunging studs-up challenge left the referee with little choice.

United held on for less than 20 minutes, and it could have been worse had De Gea’s excellent save stopped another Smalling own-goal and Ivan Cavaleiro not hit the bar in added time. 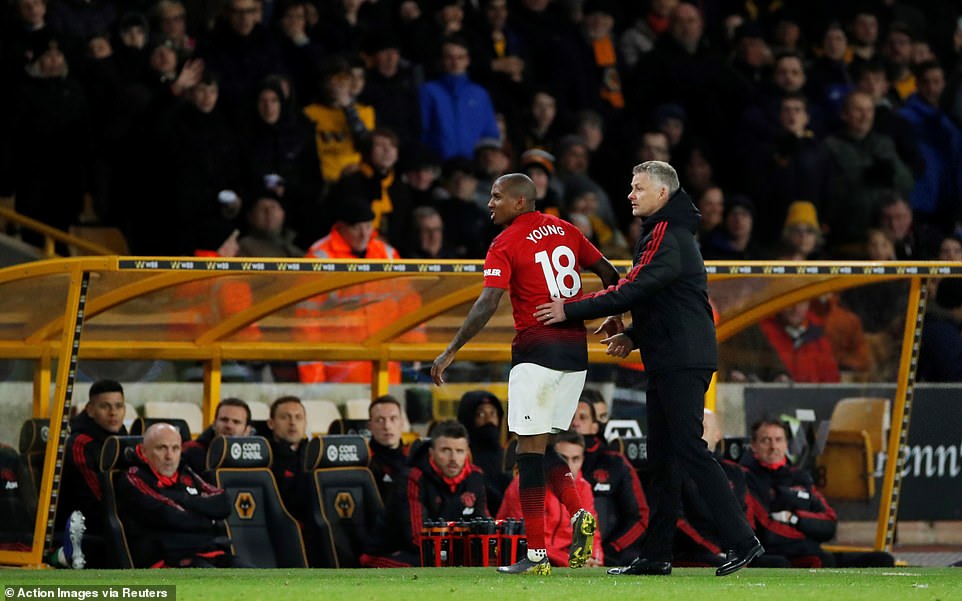 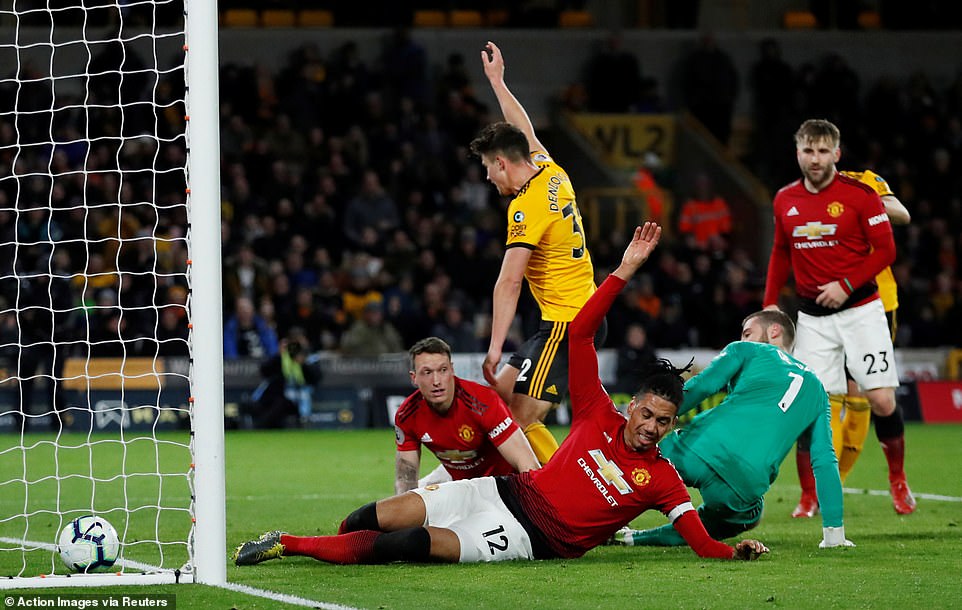 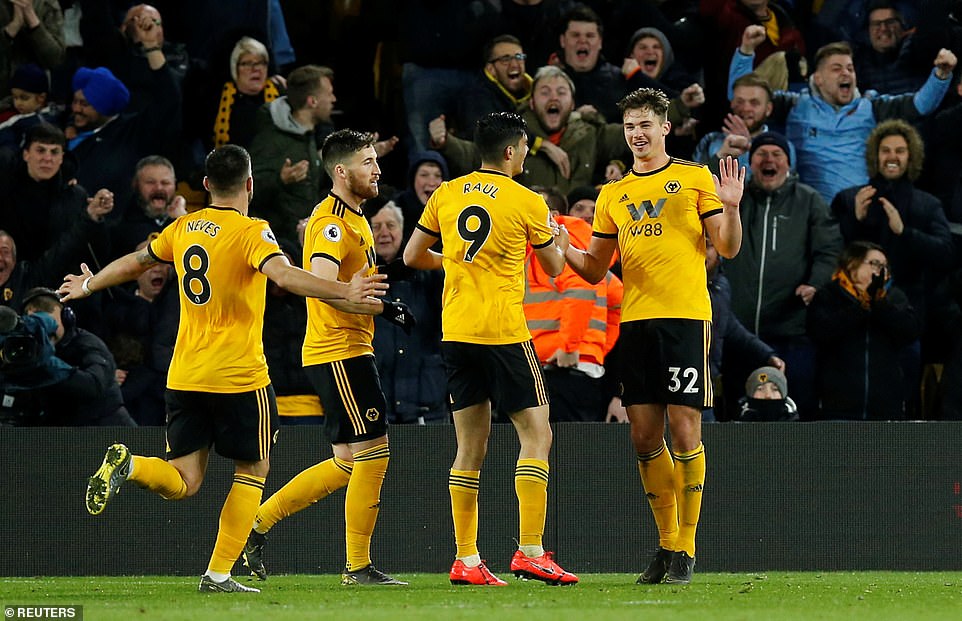 MARTIN SAMUEL: Kobe Bryant was not just a great, he was an icon of a generation – OBITUARY