The Aussie Rules season is starting here and the back pages are full of it. But a year ago the newspapers were crammed, front and back, with the scandal that rocked cricket and threatened to engulf Australian life.

It was during the Cape Town Test in March 2018 that Cameron Bancroft was caught on TV cameras roughing up the ball with sandpaper, which he then tried to hide down his trousers.

Prime Minister Malcolm Turnbull led the outcry. ‘We all woke this morning shocked and bitterly disappointed by the news from South Africa,’ he said. ‘It seemed completely beyond belief that the Australian cricket team had been involved in cheating. 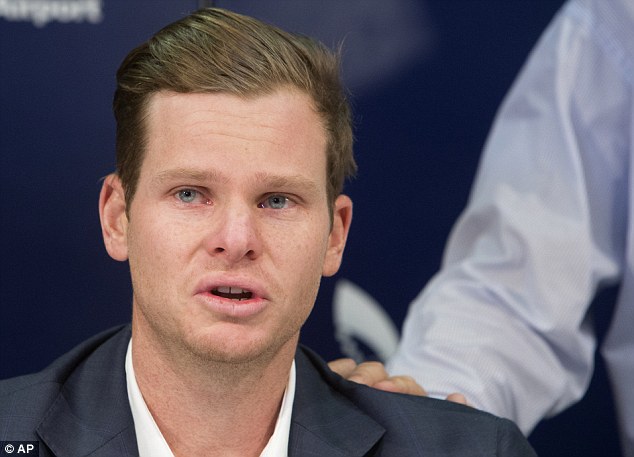 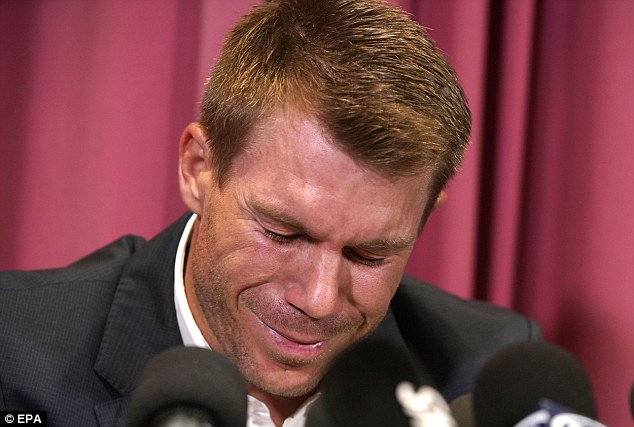 David Warner, who devised the deceit, is also set to return to action in the IPL

‘Our cricketers are role models and cricket is synonymous with fair play.’

Cricket Australia (CA) banned Bancroft for nine months. Loudmouth vice-captain David Warner, who devised the deceit, and Steve Smith, the 45th Test captain of Australia, were both excommunicated for a year.

Bancroft’s ban expired at the end of December but he is not under consideration for immediate national selection. Smith and Warner certainly are, once their exiles end this Friday. And in Dubai, their rehabilitation has begun. It is a journey that will likely see them return to Australian ranks in England for the World Cup and the Ashes this summer.

Tim Ford, the Harvard-educated leadership consultant, was employed to oversee the reconciliation process that involved the two tarnished men speaking to the increasingly in-form ODI squad ahead of their five-match series that began with victory over Pakistan on Friday. 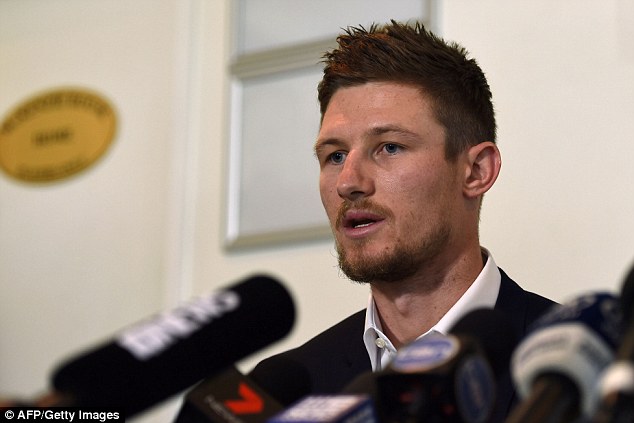 The disgraced pair will not play in Dubai. It was merely a meeting to break the ice.

The two outcasts made positive noises about the reunion. Smith said: ‘Everything is on the right track.’ Warner claimed they had been met with ‘open arms and hugs and kisses’.

But it is probably naive to imagine that it is all suddenly sweetness and light. It was, after all, only a few months ago that new coach Justin Langer admitted Australian cricket was a ‘dysfunctional family’.

Aaron Finch, the ODI captain, said of Smith and Warner’s trip: ‘What’s important is they’re really keen to slot back into how this current side works.

‘They were probably as nervous as anyone coming back into the group. It is a different time and they have been out for quite a while.’

There is also the matter of the national mood. Some of the public here are not ready to forgive. The Australian cricket team is too important to the country’s sense of identity for easy redemption.

Warner has kept his mouth shut almost entirely since the scandal. Big-money offers for interviews have been declined. He is following the advice of his new Sydney-based agent James Erskine, once manager to Muhammad Ali and Tiger Woods.

The confrontational air that garnered Warner so many detractors has been replaced by a dignified silence. And he, along with Smith and Bancroft, is said to have carried out his 100 hours of community service to cricket with distinction.

While Smith has suggested the blame lies at Warner’s feet for dreaming up the method of cheating, logic suggests culpability stretches wider than that. Didn’t the whole side know it was to Bancroft that they should throw the ball so he could rub it with a little illegal magic? 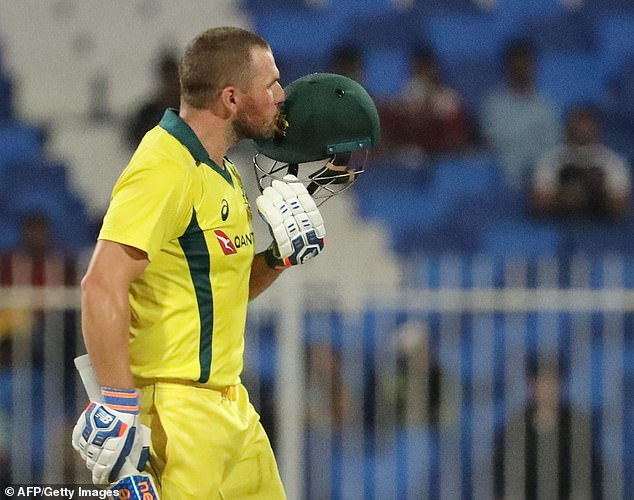 As one informed observer told The Mail on Sunday on the guarantee of anonymity: ‘These guys are the few paying for the sins of the many. Of course the whole team knew about the ball-tampering and probably CA did too. They had done it in the previous match at Port Elizabeth.’

Under Langer, Finch and Test captain Tim Paine, the emphasis is on engendering a new spirit of sportsmanship to address the failings of the old snarling Australia, one that was too ready to cast stones out of its glass house. The mix of sanctimony and aggression is why the downfall of Smith and particularly Warner — and the whole team by association — was met with so much glee in many quarters. What goes around, comes around.

The mantra now is about ‘cultural changes’ and the meeting in Dubai was meant to emphasise the new modus operandi.

ON SONG AT LAST UNDER FINCH

Australia, a country used to winning at cricket, has had to get used to losing in the post-Steve Smith (left) era.

The Aussies have played 42 internationals in the past 12 months, winning just 13.

A period that started with a one-day and T20 whitewash at the hands of England has, at least, finished on an improving note.

The Australians have won eight of their last ten matches in all formats and, under the captaincy of Aaron Finch, won their first one-day series in India for 10 years.

The scandal cost Smith and Warner greatly — approaching £5million between them in various contracts that were torn up. They lost £1m deals with their IPL franchises and would have earned as much playing for Australia over the last 12 months.

Warner’s wife Candice, a retired Ironwoman, miscarried during the stressful period. ‘We held one another and cried,’ she said. ‘The miscarriage was a heart-breaking end to a horror tour. The ordeal from the public humiliations to the ball tampering had taken its toll and, from that moment, we decided nothing will impact our lives like that again.’

She is now pregnant with what they hope will be their third child.

Smith and Warner remain Australia’s most decorated current batsmen, with 44 Test hundreds between them and both seem to be recovering well following elbow operations.

Warner, permanently banned from a leadership role within the Australia team, hit a century for his club side a fortnight ago and was one of the top scorers in Sydney club cricket before Christmas. Smith has also scored well.

They will both play in the Indian Premier League over the next few weeks before, if selected, leaving their franchises early to join Australia’s World Cup camp in Brisbane in mid-May.

Bancroft will captain Durham this summer but it is Smith and Warner who will attract the greater level of opprobrium in their more high-profile matches.

Former Australian captain Ricky Ponting, assistant coach for the World Cup, said: ‘The hardest part for these guys is going to be the public perception of us in England. They should not expect too many pats on the back there.’

Smith and Warner’s punishment for their duplicity under Table Mountain is clearly not over yet.