By Chris Foy For Mailonline

Saracens will move their derby against Harlequins to Spurs’ new stadium from next season.

‘We are looking forward to Tottenham’s ground becoming our home for this game for the years to come,’ said director of rugby Mark McCall.

‘This game should have been there if Tottenham’s ground had been available when we thought it would be. It is very exciting and it is more our area. 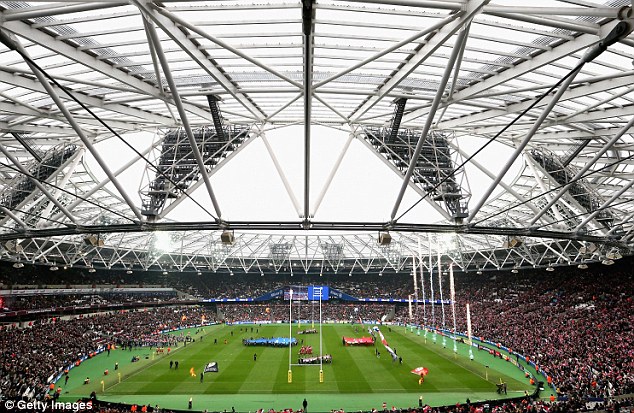 A decade ago, the Premiership champions started staging one-off matches at Wembley and last year the marquee match was moved to the London Stadium in Stratford, home of West Ham United, where they will again face Quins on Saturday.

England captain Owen Farrell is set to be rested in order to be fresh for Saracens’ Heineken European Champions Cup quarter-final encounter with Glasgow at Allianz Park seven days later. ‘There will be a few not playing this weekend,’ said McCall. ‘Owen is obviously one of the ones we are looking to give some R and R to.’

However, lock Maro Itoje may be involved as he nears a return from his latest knee injury, suffered in training with the England squad before a planned Six Nations comeback against Italy. 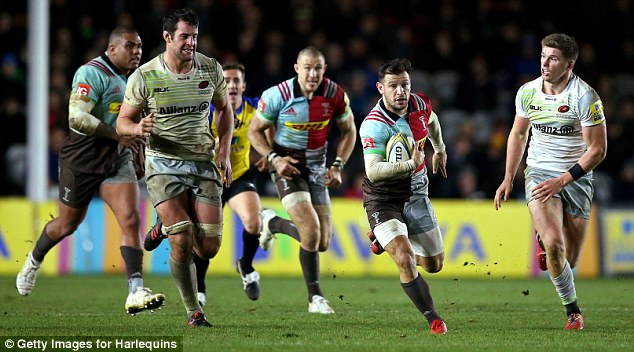 ‘We have a decision to make over Maro this weekend,’ said McCall. ‘He trained fully today. We are confident he will be back.’

However, prop Mako Vunipola is still several weeks from a return after damaging ankle ligaments in England’s win over France last month.

Meanwhile, Northampton’s director of rugby, Chris Boyd, has suggested that Dylan Hartley could make a comeback this season after knee surgery.

It was feared that the hooker and long-time Test captain wouldn’t play again before the summer, but Boyd said: ‘Dylan had a specialist appointment and it was really positive. There’s only six rounds of the Premiership remaining, spread over nine or 10 weeks, and I’d expect Dylan to play some rugby for us before the end of the season.’

The Saints will be without Courtney Lawes, who injured a calf against Wales, for their East Midlands derby against Leicester at Welford Road on Friday night. The Tigers may deploy some of their large England contingent against their local rivals, while Elliot Daly will play for Wasps at Gloucester and Tom Curry is expected to start for Sale against Newcastle at St James’ Park.

Schalke boss Domenico Tedesco urges his side to take their ‘chance’...

‘It would be best to get someone from outside’: Lewis Hamilton...