As a boy, Wilson hero-worshipped Manchester City’s German goalkeeper Bert Trautmann, and when he became a leading keeper himself, a key figure in Arsenal’s 1970-71 Double-winning season, City’s bold No 1 was still the man he tried to emulate.

‘I learnt from Bert,’ he says now. ‘In a one-against-one situation, Bert always dived head first, at a time when everyone else went feet first. Even by my time, not many went head first. Liverpool’s Tommy Lawrence was a bit like me, but there weren’t many others. It’s whatever works for you. 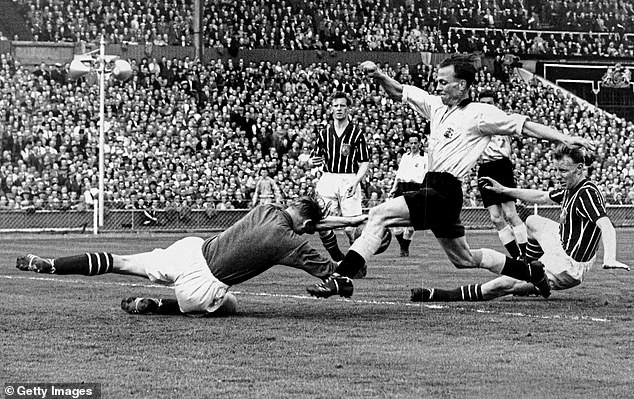 Bert Trautmann dives for a save in the 1956 FA Cup Final, and unknowingly breaks his neck 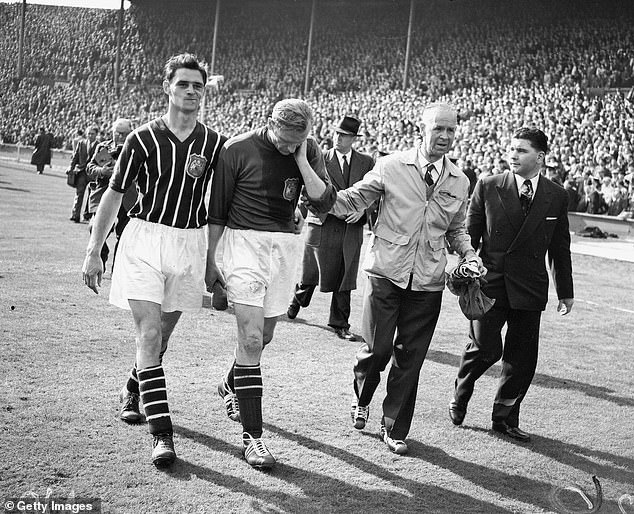 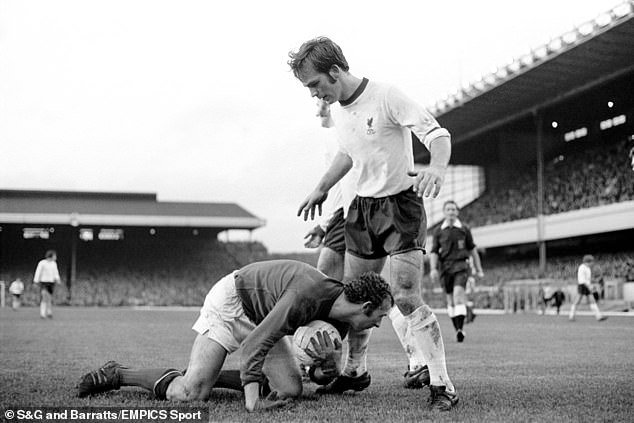 Trautmann was Arsenal goalkeeper Bob Wilson’s hero, and he emulated his keeping style

‘Pat Jennings used to save with his feet, like De Gea and Lloris do now. But my inspiration was Bert.’

Yet Trautmann, 10 years old when Adolf Hitler came to power, had been a committed member of the Hitler Youth movement, then fought on the Eastern Front during the Second World War as one of the Luftwaffe’s crack paratroop regiment, winning the Iron Cross. 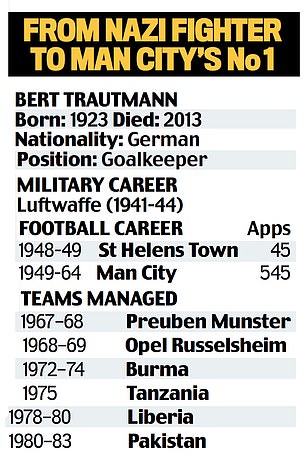 Later, he would cite his paratrooper training as a significant factor in the way he kept goal; he said it had taught him how to land without hurting himself.

For Bill Wilson, Trautmann’s past was impossible to overlook. After all, not only had he been invalided home from the Somme in 1916, he had also lost two sons in the Second World War.

‘His eldest boys, my brothers Jock and Bill, were killed,’ says his youngest son, now 77. ‘Jock was a Spitfire pilot, dead at 19. And Bill was a rear-gunner in a Lancaster, dead at 20. My father went quiet when I enthused about Bert.’

There was plenty to enthuse about, as The Keeper, a new Anglo-German feature film about Trautmann’s remarkably eventful life, makes clear. Trautmann has an indelible place in FA Cup lore for his heroics in the 1956 final, when he was injured diving at the feet of Birmingham inside forward Peter Murphy.

His head tilted to one side, he insisted on playing the last 16 minutes of the game, making several more saves to protect a 3-1 lead. Two days later, still in pain, he was told he had broken his neck.

It wasn’t the worst thing that happened to him in the summer of 1956. Just a few weeks later, his only son, six-year-old John, was killed in a road accident. 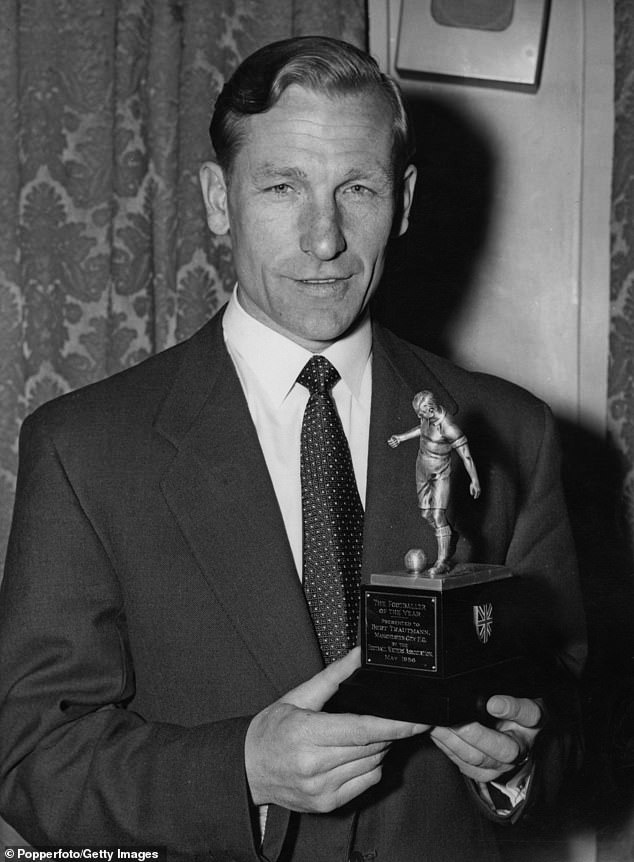 Trautmann became the first foreigner, and the first keeper, to win Footballer of the Year

The Keeper chronicles that most tumultuous of years in an extra-ordinary life. At the end of that season, recovering from the neck injury but still paralysed by grief, Trautmann became the first foreigner, and the first keeper, to be voted Footballer of the Year by the Football Writers’ Association.

He died, aged 89, in 2013, his career defined by his performance in the 1956 final. But there was much more to it than that. He was City’s keeper for 15 years, and for most of that time, easily their most popular player. Throughout the Fifties, Manchester’s parks and playgrounds resounded with the cry ‘I’ll be Bert’. Years later, when a play was staged about him, that was its title.

He’d joined City from St Helens Town in 1949, having arrived in Lancashire four years earlier as a prisoner of war. At first, he was the object of intense anti-German hostility even from City’s own fans. Manchester’s large Jewish community was outraged. Protests and boycotts were organised. But then one of the city’s leading rabbis called for Trautmann not to be made a scapegoat for the misdeeds of his countrymen.

His bravery and brilliance in goal stopped the axe-grinding, too. Soon he was lionised, not least by a budding goalkeeper growing up not far away in Chesterfield. 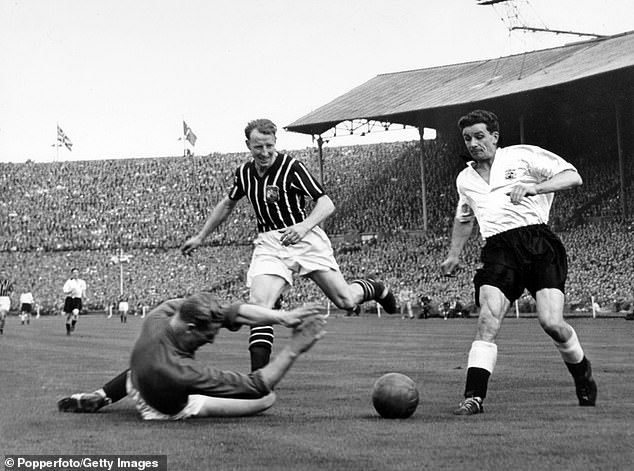 At a time when most goalkeepers went in feet first, Trautmann dove headfirst into his saves

‘I used to stand behind the goal at Chesterfield home games and our young goalie was a lad called Gordon Banks,’ Wilson recalls. ‘Even at that age he had tremendous spring. But Banksy wasn’t that much older than me and a different kind of goalkeeper.

‘Bert was my hero and it didn’t hurt that he was amazingly good-looking. Many years later, when I was a sports presenter for the BBC, I got to know him well. They say never meet your heroes, but truly, Bert was the greatest man I’d ever met.’

In 2005, to go with Trautmann’s Iron Cross and FA Cup winner’s medal, a unique set of gongs was completed with an honorary OBE, for his contribution to Anglo- German relations. When the Queen pinned it on him, she is said to have remarked: ‘Ah, Herr Trautmann, I remember you. Have you still got that pain in the neck?’ 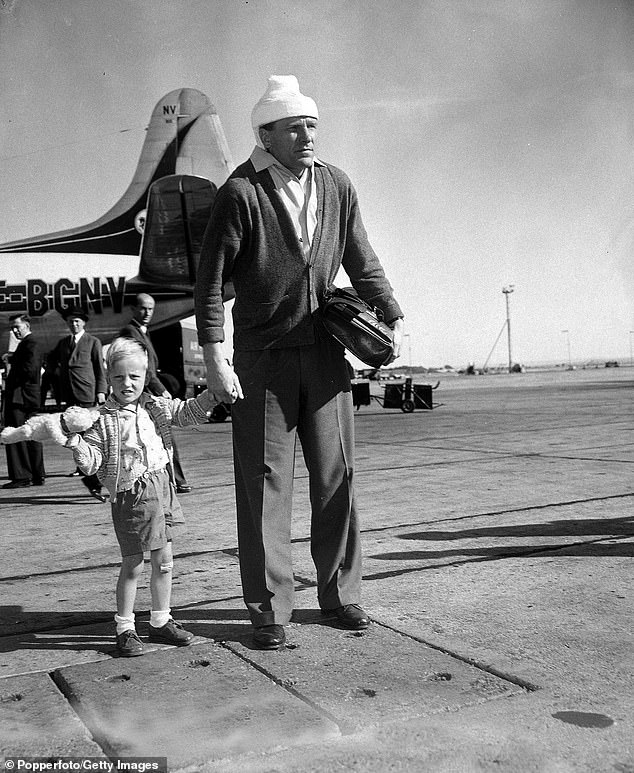 Bert Trautmann had an amazing life, which is being documented in a new film, The Keeper

But that’s not how Bob Wilson remembers him. ‘For me, it was all his years of excellence that define him, not that injury. Arguably, I did the head-first diving better than him because I never broke my neck. Mind you, I did have my left ear virtually torn off at Ipswich, as well as a punctured lung, nine broken ribs and a broken arm.

The Keeper premieres on Thursday and is on general release on April 5.

Leicester star James Maddison won’t get arrogant as he targets the...

‘I needed time out to regain my hunger’: Brook relishing ‘make...