As David Beckham struggles to nail down premises for his MLS franchise, it has only taken a year to build the venue for Miami Open

By Mike Dickson for the Daily Mail

Not every stadium project in this exploding city becomes the torturous process experienced by David Beckham.

Ten miles along the 95 highway from where the former England captain wants to develop a golf course into a soccer and commercial hub has popped up the biggest new arena in tennis, the venue of the Miami Open.

While Beckham is still struggling to nail down premises for his Inter Miami MLS franchise — originally announced back in 2014 — it has taken only a year for one of the biggest events on the tennis calendar to sprout a new venue. 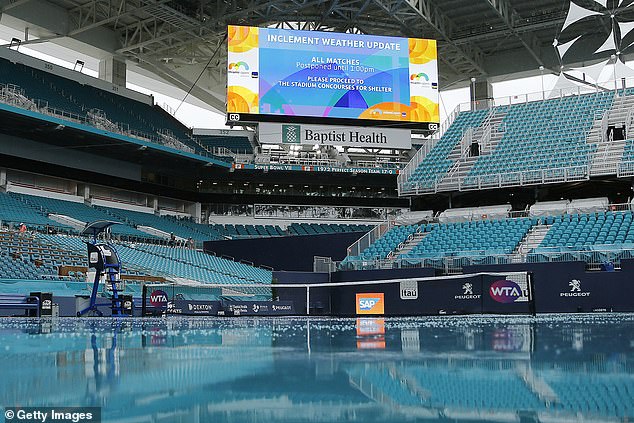 This Masters level tournament will take place over the next 12 days both inside and outside the Hard Rock Stadium, home of the Miami Dolphins NFL team.

The whole place could actually have doubled as an aquarium on Tuesday, so relentless was the rain. A roof was not included in the $70million development price.

But when the sun comes out it promises to be a striking venue, with the centrepiece a temporary 14,000-seat main court built on the football infield. 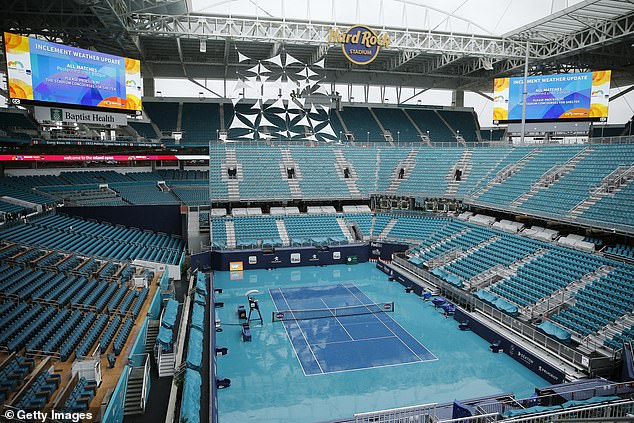 Seventeen more courts have been built outside on the stadium’s parking lot, with five ‘neighbourhoods’ created around the site as a multi-dimensional entertainment experience.

While Beckham has fallen foul of the city’s complex municipal politics, the tennis event has only ended up here for similar reasons.

For years they tried to upgrade the beautiful but dilapidated Crandon Park on idyllic Key Biscayne, only to be thwarted by planning restrictions. It had become a poor relation to Indian Wells, taking place the preceding fortnight in California, which is bankrolled by billionaire Larry Ellison.

The solution has been to accept an invitation from Dolphins’ owner Stephen Ross to construct a stadium within a stadium in this less salubrious area north of the city. 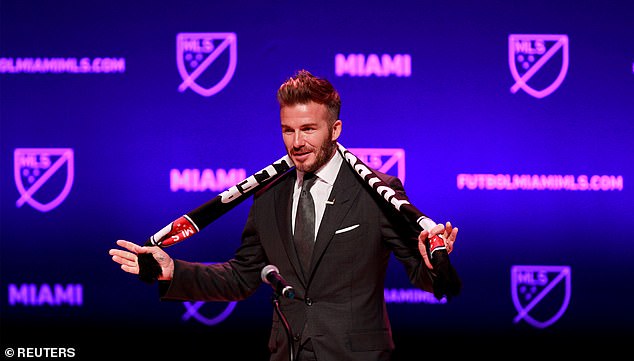 ‘We wanted to expand, we wanted to stay at Crandon but if that wasn’t an option our next thing was to keep it in Miami,’ said James Blake, one-time world No 4 and now tournament director.

‘Stephen had this idea, it took us a while to wrap our heads around it but we realised he was the right guy to partner with and do something that seems impossible, and we ended up getting it done in a year.’

Situated between the 30-yard lines, the main court has a temporary three-sided structure with the other flank comprising the existing stadium stand. Next year will provide a major logistical challenge as the Dolphins will host the Super Bowl in early February.

Blake said the players had generally been positive about the move but admitted there had been a few moans, such as the traffic.

The longer term question is how many fans will want to brave the congested and drab journey along the highway to visit an unfashionable part of town. The stunning drive over the Rickenbacker Causeway onto Key Biscayne it is not.

Rafael Nadal is the only major absentee from the field, with Kyle Edmund seeded 19th and Jo Konta hoping to replicate her win here two years ago. Dan Evans and Jay Clarke will resume their hopes of joining the main draw on Wednesday after rain cancelled play on Tuesday.