Derek Lawrenson for the Daily Mail

One of the most famous holes in golf claimed its most famous victim on Friday. Now we know: even the mighty Tiger Woods feels the heat when he stands on the 17th tee at the Players Championship.

Picture a gorgeous, tranquil scene. On a postcard Florida morning filled with soft breezes, Woods came to the iconic island green par-three at three-under par for his round.

He had moved up to eighth in the event and the excitement was palpable. It might have been mid-morning but more than 15,000 people had gathered already to fill the amphitheatre that has become one of the best settings in the game. 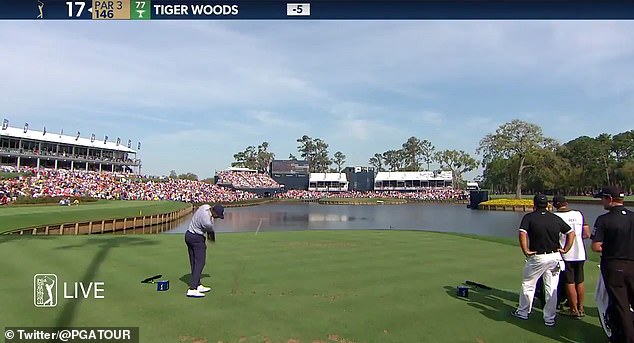 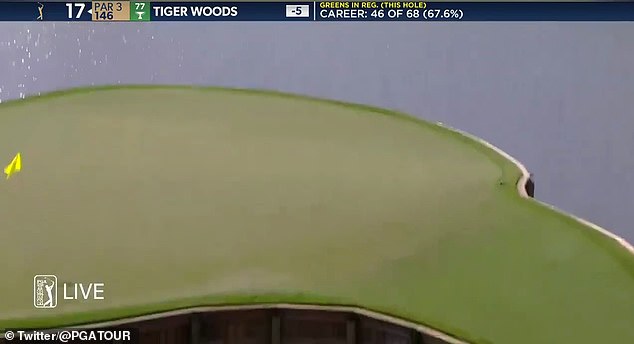 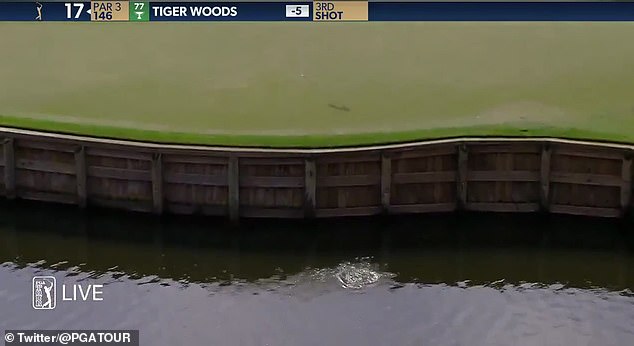 A solidly-struck blow with a wedge was all that was required to cover the 130-odd yards. As Tiger stood over the ball, the massed hordes were thinking birdie, not oblivion.

He pulled it — the one thing you could not do. Consequently, the ball flew a few yards further than he wanted, meaning it rolled into the water.

The collective groan from the crowd must have been heard on the other side of the course. Woods restricted himself to one four-letter epithet. You know the one.

He moved forward to the drop area. If truth be told, this shot from 80 yards might be harder, because of the awkward length. Tiger pulled that one as well. Badly. This one ended up in the hazard after just one bounce.

‘I thought I could play a wedge shot from 80 yards,’ said Tiger, with a rueful smile. ‘Now I know I can’t.’ 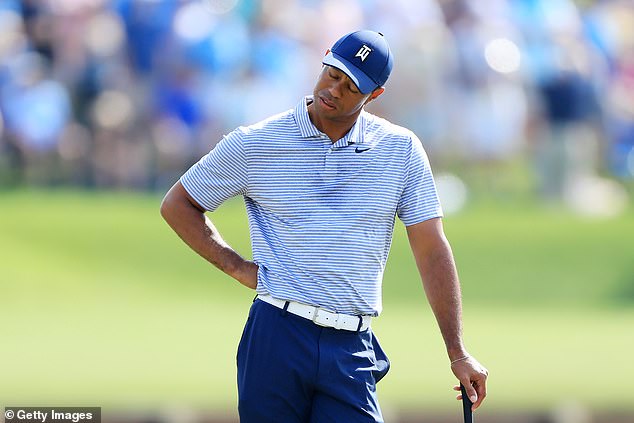 A man who had only put four balls in the water on this hole in 69 previous rounds had added two more in five minutes. A player who had never recorded anything worse than a double bogey on this hole was playing his fifth shot with the expanse of water still to be negotiated.

Mercifully, Woods found dry land with his next shot and two putted for a seven and his first quadruple bogey in 1,229 career holes at Sawgrass.

In the space of 15 minutes he fell from tied eighth to tied 57th. The stupid thing was he played very nicely before and after. He signed for a 71, meaning that a par at the 17th and he would have finished his second round within touching distance of the lead.

Bigger picture, and he looks in encouraging shape for the Masters, with his putting improving and no obvious physical issues. 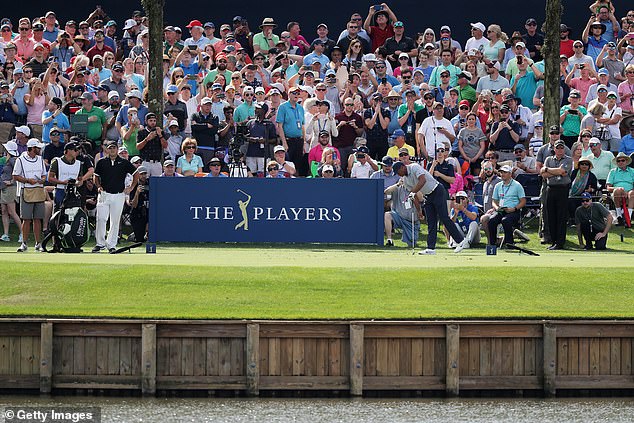 ‘I’m pleased with the way I played for 17 holes,’ he said. ‘The other hole means I’m a few shots back, but I can still win.’

The leader at lunchtime on Friday — six ahead of Tiger — was Jim Furyk, as the last American Ryder Cup captain proved there is life after his Parisian folly.

Scot Russell Knox, who knows all about the 17th after running up a nine there two years ago, shot 68 to be three behind. First-round leader Tommy Fleetwood and Rory McIlroy were among the later starters.

Wolves supporters ‘attacked by hooligans’ of Standard Liege in Portugal ahead...