‘It gave us more motivation before the game’: Connor Goldson claims Aberdeen hung pictures of their Betfred Cup semi-final triumph on the Pittordrie walls to rile Rangers

Stephen Mcgann For The Daily Mail

Faced with images of Aberdeen’s Hampden triumph as they walked to the away dressing room, Ibrox players responded with a rousing 4-2 victory followed by raucous celebrations.

It was later denied that Derek McInnes entered the away dressing room to order the Rangers players to keep the noise down. But it’s understood McInnes was surprised by the intensity of the celebrations and made his feelings known to Steven Gerrard. 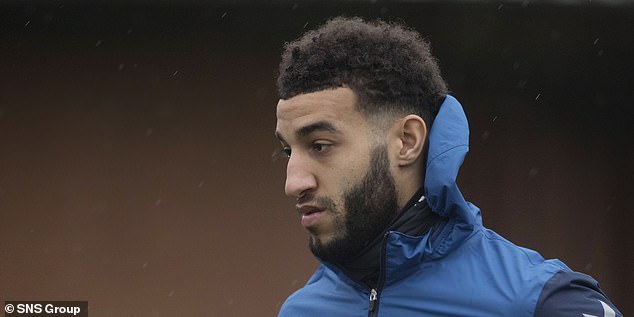 Goldson claims the move was self-defeating and admitted Rangers players perceived the semi-final pictures as an act of pre-match provocation.

‘It was a bit petty. Do you really have pictures on your wall of a semi-final win when you didn’t win the final? I don’t know. I think they did it just because the game was against us.

‘They maybe thought we would look at the photos and they would bring back bad memories or we wouldn’t like to play against them again.

‘That’s the only reason I think it can be because you don’t put up pictures of a semi-final if you lose the final.

‘We thought it was petty and we knew what they were doing. It gave us that bit of motivation.

‘Whether the pictures were there or not we were going there to get three points. But we were walking down the corridor, walking into the stadium, and it’s not something you expect to see. 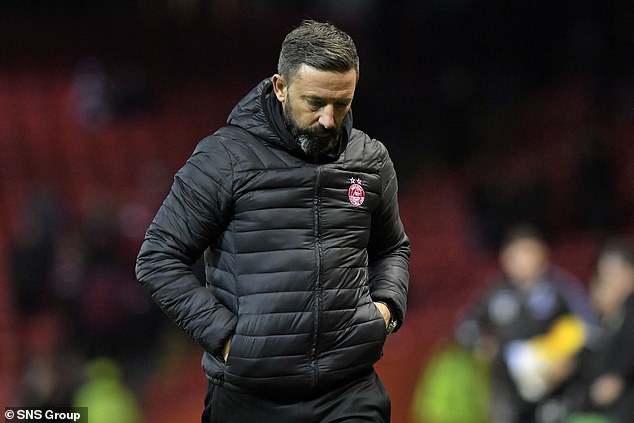 ‘We spoke about it more as a laughing matter. It wasn’t spoken about as in: “Oh there’s pictures on the wall, we need to make sure we win”. It was more “have you seen what they’ve done?”.’ Certainly the experience was a new one for Goldson, a £3.5million signing from Brighton.

‘I think it is a bit different when you play for Rangers compared to Brighton and Shrewsbury,’ he said. ‘Maybe they thought it would give them a mental edge but we proved we were strong.’ Assistant boss Gary McAllister denied suggestions the Rangers celebrations were in any way over-exuberant although he described the atmosphere around Pittodrie as ‘feisty’ after Alfredo Morelos and Dons defender Scott McKenna were handed red cards.

‘I’ve seen the little quotes that are flying around,’ said the former Scotland captain. ‘The dressing rooms are in very close proximity at Pittodrie.

‘We celebrated as much at Livvy as we did at Pittodrie, the three points were as important. It’s a big game, there was loads of emotion, we enjoyed the result in a very competitive game.’ The regret over the Morelos and McKenna incident was the fact it diverted attention from a terrific contest. Six goals, a frantic tempo, a crowd of close to 20,000 and high stakes contributed to a game which earned praise from all over the UK.

‘I have fielded loads of calls from friends south of the border saying how good a game it was from a neutral’s point of view,’ added McAllister. 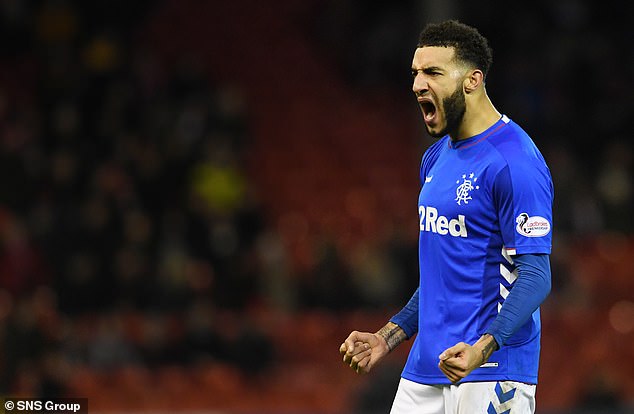 ‘It was a game with good goals, good play and two teams on the front foot trying to get the right result.

‘There were brave decisions by Aberdeen trying to get something from it and then Jermain Defoe came on at the end and took it away from Aberdeen.’ The satisfaction of victory will have been tempered with last night’s news that Morelos will serve a three-match ban after his appeal was rejected by the SFA, ruling him out of tonight’s tricky Scottish Cup tie in Kilmarnock.

On top of that, goalkeeper Allan McGregor is facing a two-game ban after being issued with a notice of complaint for kicking out at Aberdeen midfielder Lewis Ferguson.

‘We need all our big players for all the big games and Kilmarnock is as big as the game at Pittodrie,’ said McAllister before the news broke yesterday.

‘At this club you go into every competition trying to win it and this is no different. The Scottish Cup is a big target for us.’ Six points behind Celtic in the Premiership, the title race is far from over. Nevertheless, the Scottish Cup offers the greatest chance of Rangers ending their eight-year wait for a major domestic trophy.

Beaten 2-1 at Rugby Park in a Premiership clash on their last visit, McAllister has called on the players to avoid a repeat of the catastrophic unforced defensive mistakes which cost them an early lead on Defoe’s debut.

‘It’s about keeping errors to a minimum and it’s about staying focused,’ said Gerrard’s No2.

‘We know Killie pretty well and they will be hard to break down. They are a good side and their results have shown that.’ McAllister concluded: ‘They all feel like big games (at this stage of the season). But this is a cup-tie and we want a good run.’