Dominic King for the Daily Mail

Pep Guardiola has warned Liverpool to prepare for their fight of their lives as Manchester City ‘will never give up’ their quest to become champions again.

City ground out a hard-fought 2-0 win at Everton on Wednesday night, a victory that cemented their position as title favourites and propelled them to the top of the table for the first time since December 7. They lead Liverpool on goal difference, having played a game more.

It represents a dramatic turnaround as nine days ago, it seemed as if City’s world was about to cave in following a 2-1 defeat at Newcastle. Guardiola’s side were not fluent at Goodison Park but their desire was beyond question and he is confident in their ability to go the distance. 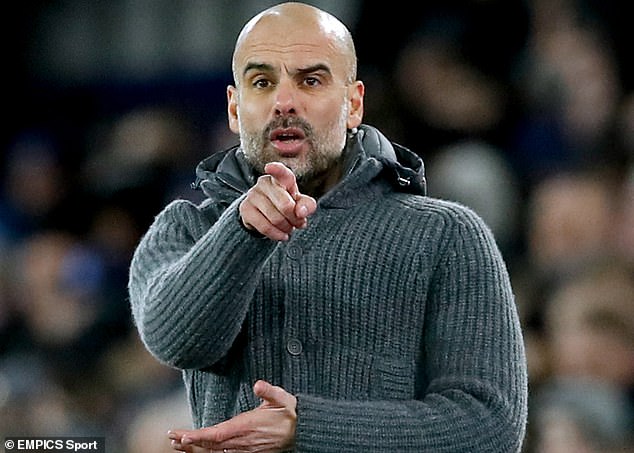 ‘It’s much better now,’ said Guardiola, whose side secured victory thanks to goals from Aymeric Laporte and substitute Gabriel Jesus. ‘We have played one more game. It’s the best we can do. The reality is we could have been one month ago 10 points behind when we played Liverpool.

‘A few days ago, we could have been seven points behind. Now we are top of the league. That is the best advice, the lesson is – never give up. That is a lesson for all athletes. Try to win the games, because life can change immediately.’

City are chasing a quadruple and the demands on them will be unforgiving over the next month. The hectic schedule might hand Liverpool an advantage as they can rest in between games but Guardiola is not trying to second guess what is going on at Anfield. 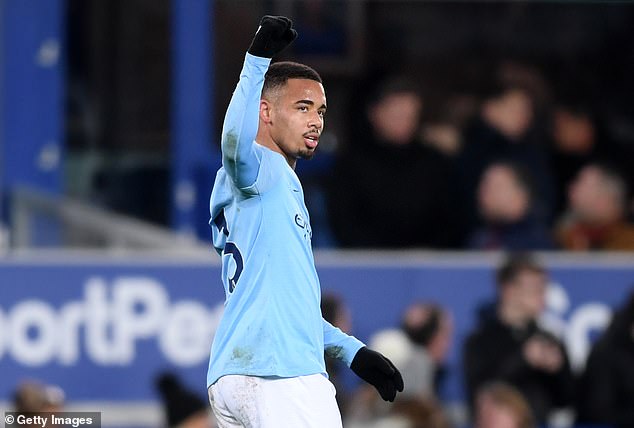 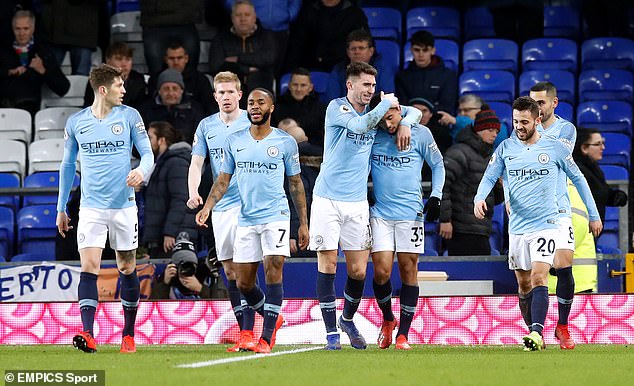 ‘I don’t know what (Liverpool) think,’ said Guardiola. There are lots of contenders to fight for the title, of course. The rivals are there. There are lots of games. Every game is tough. We knew this would be tough. The amount of games we have in our legs, we cannot give days and days off.

‘We come from 100 points, we come from champions and we are in a situation where we could have given up but it didn’t happen. We gave an incredible game against Liverpool. These players have shown incredible desire and performances for the last two years. How could I question them?

‘I don’t know how far we will get. Maybe we will die in the road. But we are trying. I used to listen to what older managers – Sir Alex Ferguson, Rafa Benitez – what they said and complain about the schedules and nothing happened.

‘I arrived here so I understand the situation If we played just one competition, the schedule would be better but when you have to play four you have to adapt. So when the Premier League say we have to play, we take the bus to play at the right time and at the right moment we play the game.’

The next game is Chelsea at the Etihad Stadium on Sunday and Guardiola said: ‘We are the leaders. 12 games to play, a lot of points. We started well. Arsenal and here, now comes a big, big test; a big goal. Chelsea are an exceptional team who have had seven days to prepare. 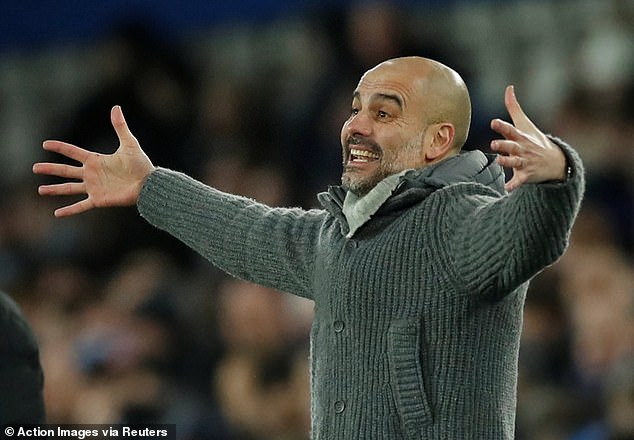 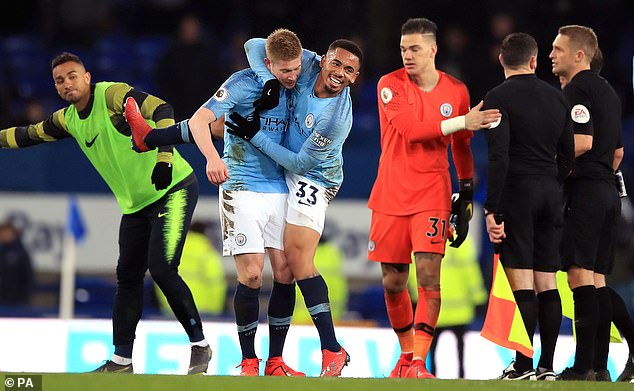 ‘We have to prepare well. It really is final for us this weekend. If we are able to take these points, it is a huge step forward. The performance was not as good as we expected. But Goodison Park is always difficult for Manchester City in the last decade.’

Everton were spirited but they were limited in their threat – they only managed one shot on target – and Marco Silva’s decision to make a raft of changes to his team, putting £149.06million of talent on his bench including leading scorers Richarlison and Gylfi Sigurdsson, did not fully pay off.

‘There are positives but again we didn’t take the points we want and we are working to achieve,’ said Silva. ‘At the moment bad things come too easy, we concede after 47 and 97 minutes. Just working like we did tonight, things will change for us, I am really positive.

‘The team showed what we must do. The fans are so good, at the end of the match what they did for our players, I don’t have doubts. We are all together and we will give them what they want and what they deserve.

‘Everything was different compared to (losing to) Wolves, I have to be honest. This has to be our image as a team. We must be consistent, it is an obligation for us. A desire to win, an aggression, it is what we have to do every time against every team. You have to respect every team.’

Manchester City vs Yokohama – Live score and updates in Japan