Jon Macken was stopped in the street recently by a Manchester City supporter, who announced: ’I’ll never forget, I was in a bar in Thailand when you scored that goal.’

‘It happens a lot,’ says Macken. ‘They all say they remember where they were. Listen, it’s not quite JFK, Lady Diana, Jon Macken… but at that moment, to have an impact on people’s lives, that’s what being a footballer is all about.’

More on the goal later, but here is the context. It was exactly 15 years ago that Kevin Keegan took City, with one win in 18, to Tottenham Hotspur for an FA Cup fourth-round replay. 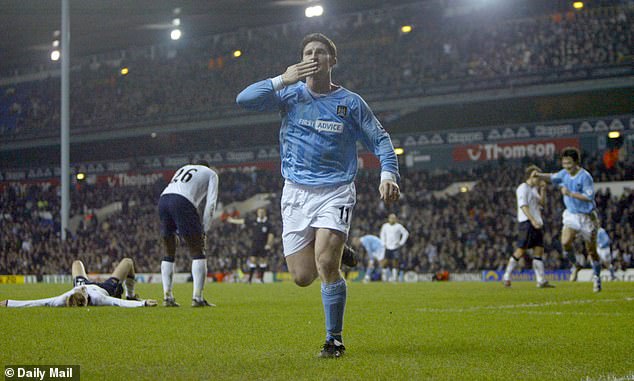 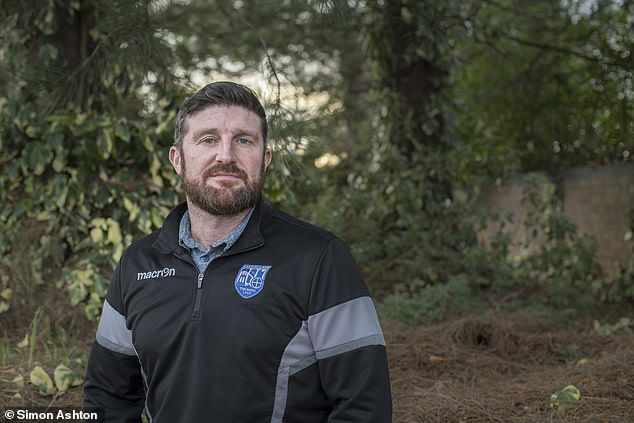 Macken laughs when we put it to him that a second game should never have been needed.

‘Ah, my miss?’ he says of a late chance during the 1-1 draw at the Etihad. ‘The commentator on the DVD of the replay makes mention of that a few times…’

It is described on the tie’s Wikipedia page (yes, it has its own entry) as ‘an open goal’.

‘What? No!’ says Macken. ‘I haven’t seen it since but I don’t think it was that bad. I suppose part of me is glad, it all worked out better in the end, didn’t it?’ 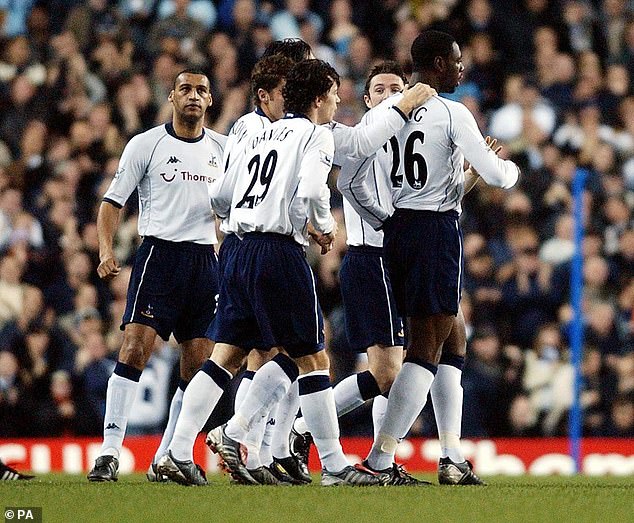 Macken was among the substitutes on a sub-zero night at White Hart Lane. He watched without an ounce of surprise as David Pleat’s Spurs led 2-0 inside 19 minutes, Ledley King and Robbie Keane the scorers.

‘You’re sat there thinking, “Here we go again”. You just couldn’t see us getting back in the game. We had nothing. We looked tired, no legs, no drive, we weren’t creating.’

Despite his despair, Macken was desperate to get on. On 27 minutes he had his chance when Nicolas Anelka signalled that his hamstring had gone.

‘I’m like, “Just get a goal, see if I can spark something”. And then they scored again.’ 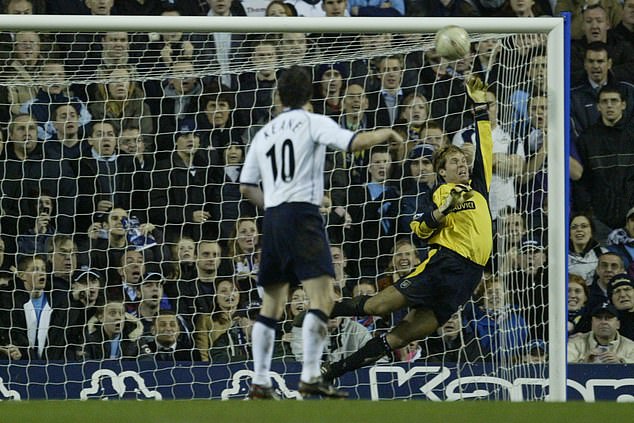 To the 30,400 inside the ground and to a live television audience, Christian Ziege’s free-kick had settled the tie.

‘We had no direction,’ says Macken, now 41. ‘It was worrying. They’d scored three easy goals and were all over us.’

City midfielder Joey Barton was booked for the foul which led to the third goal. Macken sighs as he recalls what happened next.

‘It was half-time and I was just entering the tunnel when I heard, “He’s sent him off!”. I didn’t know if it was us or them. Then you turn around and see Joey arguing with the ref… “Oh God, here we go, this is just getting worse and worse”.’

Macken says Keegan had no idea of Barton’s red card as they gathered in the dressing-room.

‘It was pretty much silence. We were stunned. Kevin was a charismatic man, wore his heart on his sleeve, I liked him, but he didn’t have much to say,’ says Macken, himself now a manager with seventh-tier Radcliffe Borough. 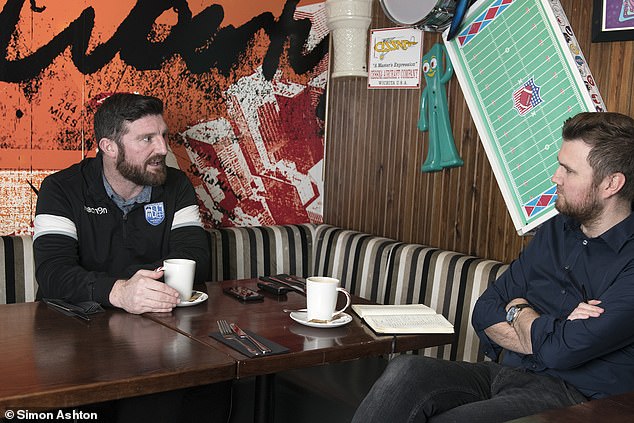 Macken, now manager of Radcliffe Borough, sat down with Craig Hope to discuss the game

‘Kevin was probably thinking, “This is it for me, I could be sacked here”. That performance had upset him.’

City’s 10 men gathered in the tunnel. ‘Damage limitation,’ says Macken. ‘But then we heard this noise. It was our fans, maybe it was a self-mocking thing, almost as if it couldn’t get any worse, but it was incredible.’

Within three minutes Sylvain Distin headed a reply. Still, though, Spurs were in control.

Keegan, it transpires, had never seen City reserve goalkeeper Arni Arason in competitive action before this, his debut. After 45 minutes he was probably wishing he still hadn’t. Yet the Icelander was to prove a hero. 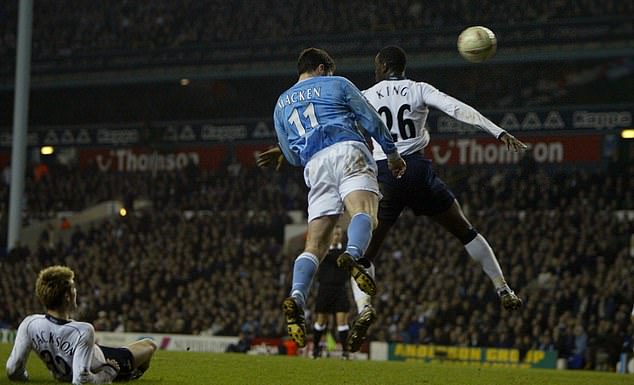 ‘People forget the saves he made at 3-1 down, he was phenomenal,’ says Macken, referencing one stupendous double stop from Ziege and Gus Poyet. ‘He got a new deal on the back of that!

‘But Arni pulling off these saves, Joey getting sent off, the early goal for us, it all contributes to something magical that you start believing in. “Wow, here we go, maybe…”.’

‘We had nothing left in our legs for extra-time, we had to win it then,’ says Macken. ‘Another 30 minutes, they would have scored two or three. We were done.’

Spurs knew as much and had settled for the additional period. Then, in the second minute of injury-time, City left-back Michael Tarnat sized a cross. 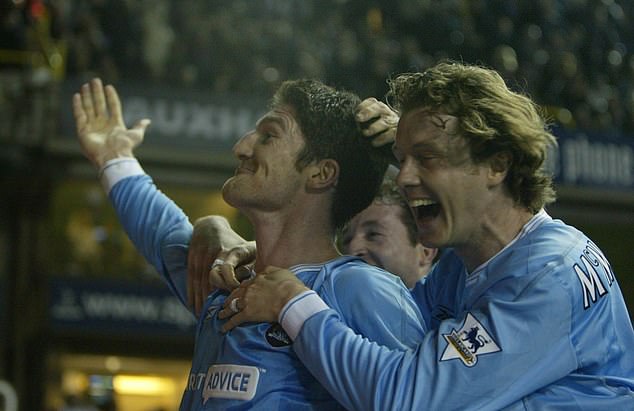 ‘His left foot was like a wand,’ starts Macken. ‘I knew it would go into a good area. My only thought was, “Get yourself in that spot now”. The delivery was perfect. As soon as it came across, I knew, it’s a weird feeling.

‘I headed it back across the keeper, just guided it. It still takes an age, but it’s not going anywhere but the back of the net.’

Cue pandemonium in the away end. Commentator Martin Tyler roared: ‘They have made the impossible possible!’ 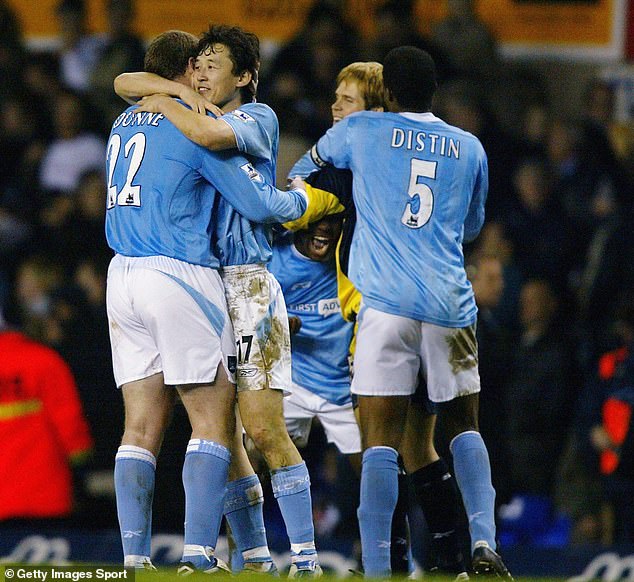 But, just as they had been 45 minutes earlier, City’s players were stunned.

‘You know what, our celebrations weren’t even that wild,’ says Macken. ‘We were knackered, it was just relief, disbelief even. I should have been going crazy!’

One City fan in a bar in Thailand had no such problem. ‘That makes me proud,’ says Macken. ‘Football isn’t about money. It’s about moments, being part of something memorable, something special.’

Spurs 3 City 4 was certainly that. 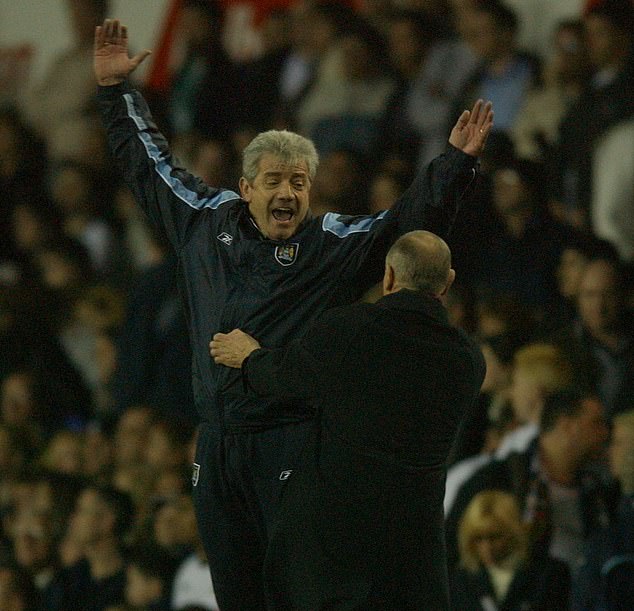 Manchester-born Macken started his career at United, not that he was spotted for his footballing ability.

‘I walked off after a game for Manchester Boys Under-10s and told our team, “That’s the attitude you need when you’re playing against bullies”,’ he recalls.

‘The United scout heard it and was impressed. He pulled me to one side and that was it.’

It was there that Macken scored the goal which persuaded Keegan to break the club’s transfer record in 2002, paying £5m after he lobbed City goalkeeper Nicky Weaver from the centre circle. 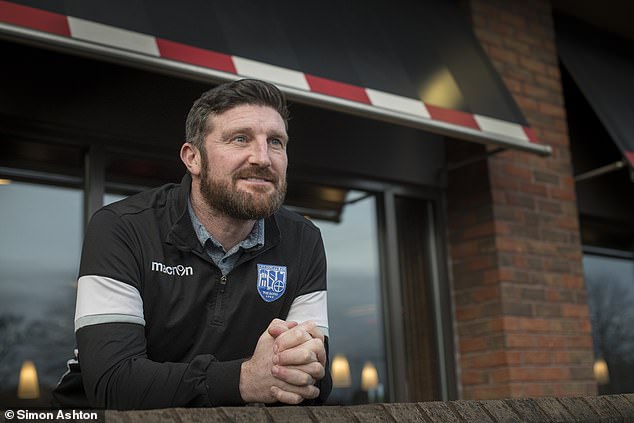 ‘People forget I was the record signing, and that’s easy to do given it’s now £60m!,’ he says.

Macken’s three years at City were defined by the winner at Spurs and his goal in a 4-1 victory during the first Manchester derby at the Etihad.

‘It wasn’t a great season, yet you’ve got these two iconic matches. That’s the beauty of football,’ he says. ‘But losing to United in the next round after Spurs was a low, especially as Kevin dropped me, that really hurt.’

His final involvement with City was more infamous than iconic. Stuart Pearce was by now manager and they needed to beat Middlesbrough at home on the final day to take a European place.

With the score at 1-1 late on, Pearce used his final substitute, ignoring Macken and sending goalkeeper David James up front. The YouTube footage of James during City’s forlorn search for a winner is not flattering. 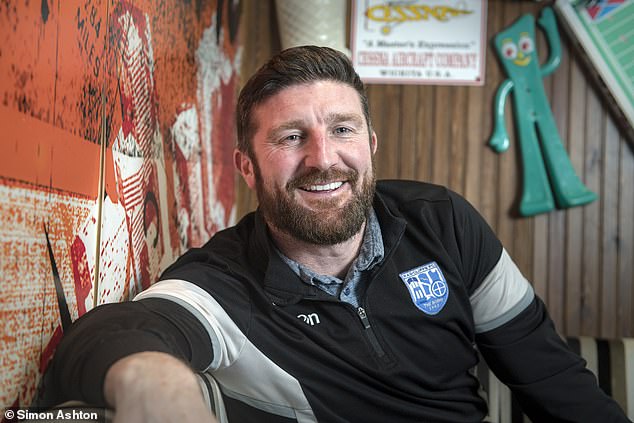 ‘I think he was wrong,’ says Macken. ‘It was disrespectful, not just to me, but to the team and supporters. They were thinking, “What the hell are you doing?”.

‘David James is a fantastic lad, but he’d be the first to say it was a stupid mistake. The manager lost the dressing-room after that, the likes of Joey Barton and Danny Mills weren’t happy.’

Macken is wearing his Radcliffe tracksuit. Has he ever put a goalkeeper up front?

‘No!’ he answers, resoundingly.

Has he ever been trailing 3-0 at half-time? 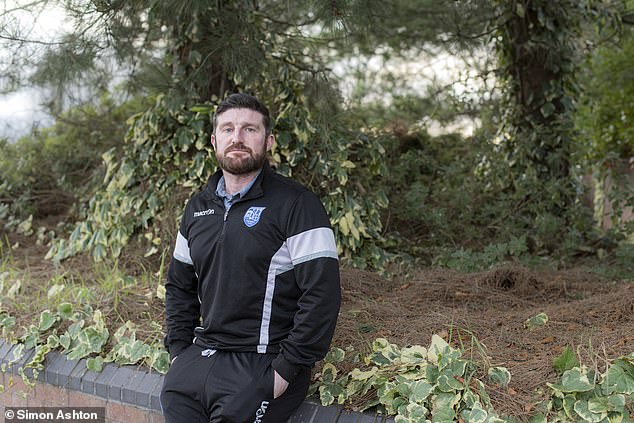 This is Macken’s second season with the Greater Manchester club. They finished 20th in the Northern Premier League last term but are currently flying in third.

He must be doing something right?

‘I’d like to think so,’ he says. ‘The club needed to change. It was existing to survive. Everyone was half expecting to get beat every week. Now, there is belief. We’re moving forward in every way.’

Macken, though, has his own ambitions.

‘I want to manage as high as possible. If you haven’t got that desire to push yourself, what’s the point in being in the game? I’ll say it again, it’s all about creating those special moments.’